The story of Crows 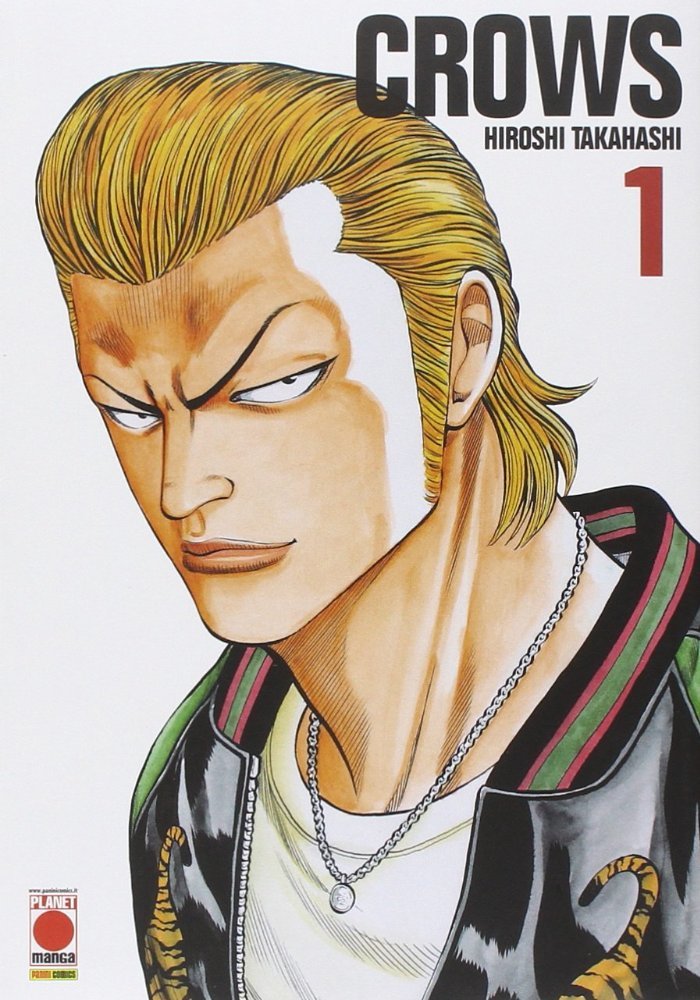 Crows is a manga series written and illustrated by Hiroshi Takahashi in the yankee (high school delinquent) genre. The story mainly revolves around the main protagonist Bouya Harumichi and other teen-aged delinquents of surrounding schools and gangs. It has the same setting as Takahashi’s other works like “Worst” and “QP”. Akita Shoten serialized the manga in their magazine Monthly Shonen Champion from 1990 to 1998, with a total of 26 volumes. As of April 2009, Crows had sold more than 46 million copies worldwide.
In 2014, Takahashi published a 1-volume side story titled “Crows Gaiden: Katagiri Ken Monogatari”. In 2016 and 2018, many manga creators participated in tribute projects for the manga called “Crows Respect”. This special project featured various one-shots which were then collected into a compiled book volume and published by Akita Shoten.
The series was adapted into a 2-episode OVA by Knack Productions in 1994, which covered the first three volumes of the manga. Crows also inspired three popular live action films titled “Crows Zero” (2007), “Crows Zero 2” (2009) directed by Takashi Miike; and “Crows Explode” (2014) directed by Toshiaki Toyoda. Other media from the Crows franchise included a Sega Saturn game titled “Crows: The Battle Action” and a PlayStation 4 game titled “Crows: Burning Edge”.
Official trailer for the third live-action film “Crows Explode” (2014)
Crows
▸

The story of Crows mainly revolved around Bouya Harumichi, a new transfer student at Suzuran All-Boys High School in his sophomore year.
Suzuran was mostly known as “The Crows School” due to its notorious delinquent students and the school’s reputation even roared in other prefectures of Japan. The nickname originated from the delinquent students being hated by the general public for their inauspiciousness much like crows. 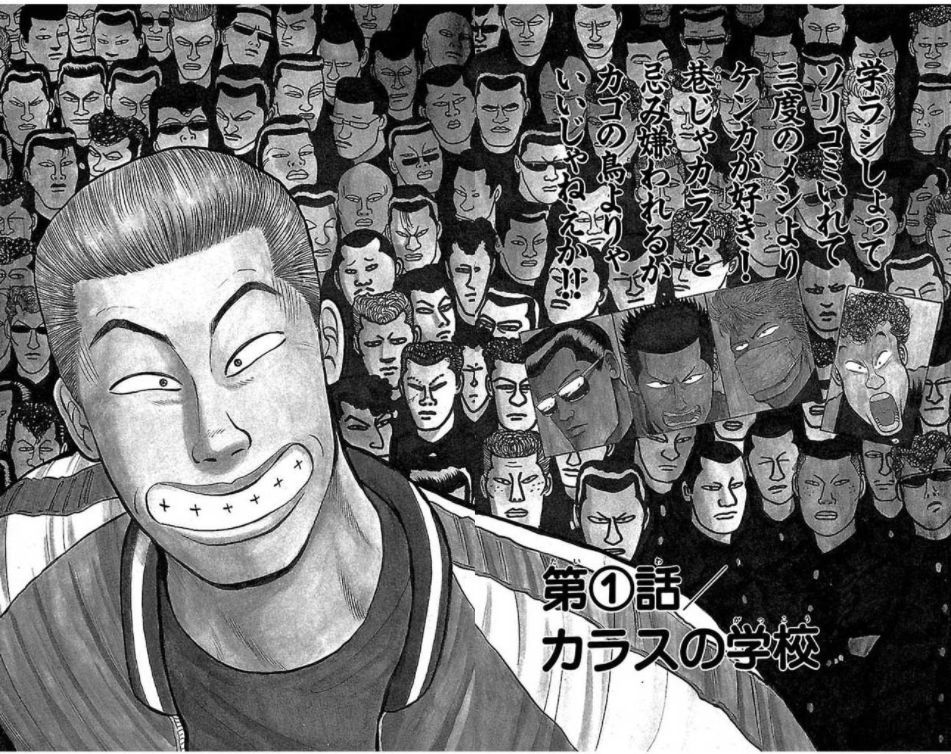 At the beginning of Crows, Bouya met a scrawny kid named Yasuda Yasuo on the train to school. Due to his lack of fighting skill, Yasuda was often bullied by his peers. When Yasuda was running away from one of the school’s delinquents named Akutsu Futoshi, he saw Bouya and begged Bouya to rescue him. 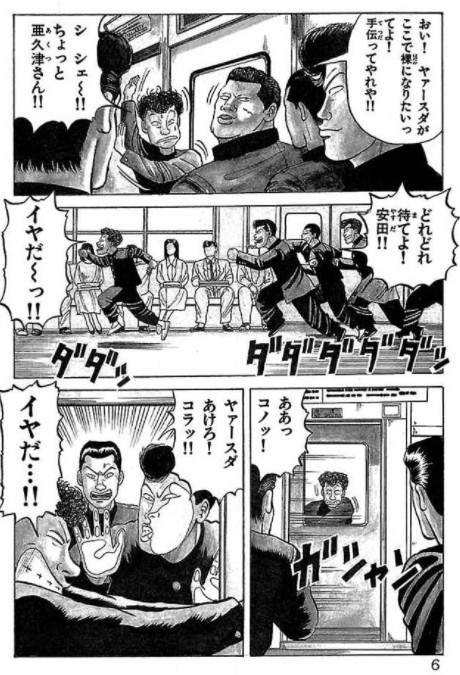 Initially, Bouya refused to lift a finger but he changed his mind after seeing a picture of Yasuda and his beautiful big sister that Yasuda kept in his wallet. Bouya had picked Yasuda’s wallet up from the floor when he accidentally dropped it. However, when actually faced with Akutsu and his gang, Bouya hit his head when standing up and got kicked around easily by Akutsu. 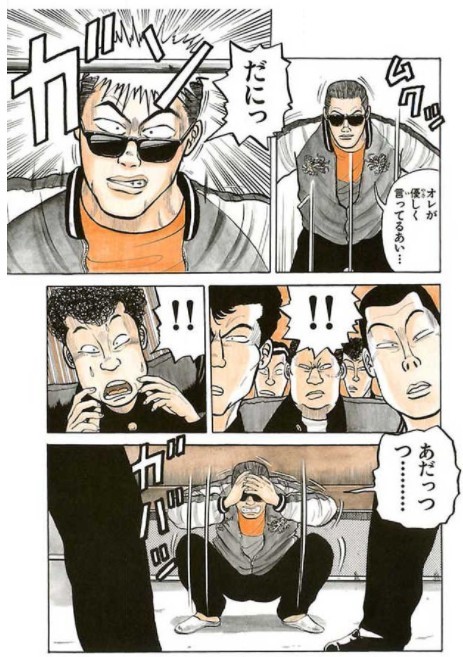 Then Akutsu’s gang proceeded to beat Yasuda, tripped him naked and forced him to run the whole way to school.

At Suzuran, Akutsu and his gangs marched in while the other students bowing their heads in fear and respect. However, they were challenged by the Ebizuka Trio made up of three infamous fighters, consisted of Makoto Sugihara, Toshiaki Honjou and their leader Hiromi Kirishima. The trio made a name for themselves at Suzuran after winning the freshmen war and went on to challenge the other factions at school. 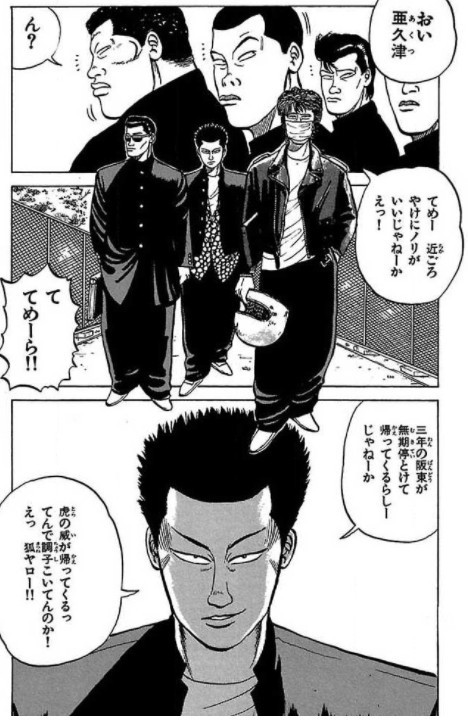 At this point, Suzuran had many factions fighting for control and as Akutsu’s boss – a senior named Bandou Hideto was about to come back from suspension, the tension rose high. Bandou, along with his friends Senda Naoki and Yamazaki Tasuya formed the Bandou-Ippa faction and were the current top dogs at Suzuran.
When Bouya finally met Yasuda again at school, Bouya promised to avenge Yasuda in order to get close to him and his beautiful big sister. 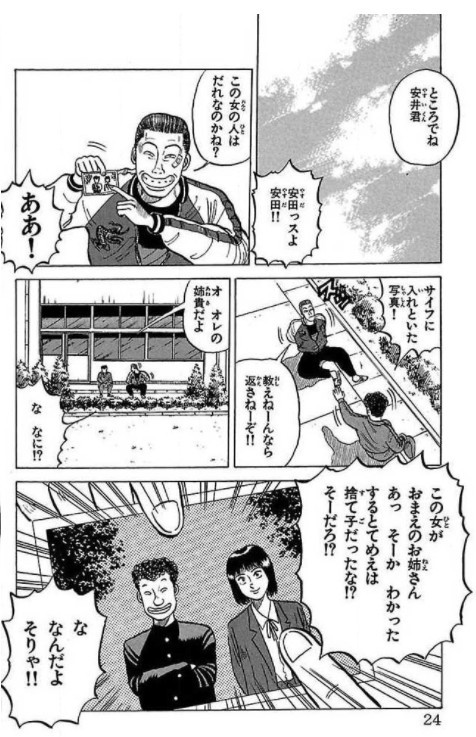 It also turned out that Bouya was enrolled in the same class as Hiromi of the Ebizuka Trio. Hiromi made fun of Bouya’s blond hair and his name “Bouya”, which could be read as “boy” in Japanese. Bouya returned the favor by throwing a shoe in Hiromi’s face. 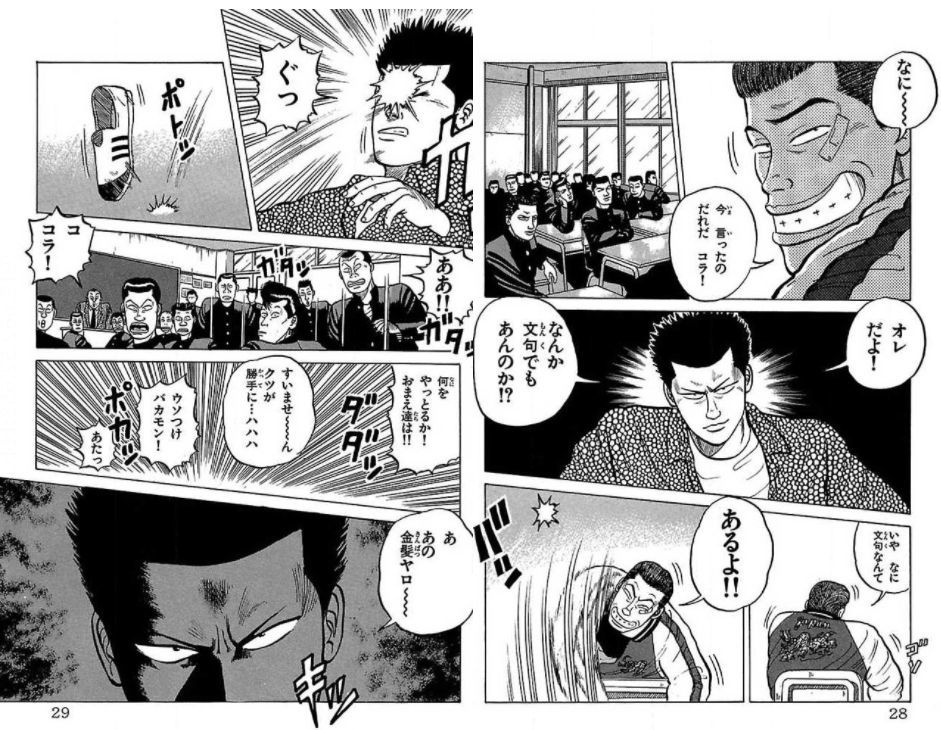 At breaktime, Bouya spotted Akutsu and his gang passing through the hallway and followed them to the restroom. Bouya challenged Akutsu’s gang with a confident grin but Hiromi interfered before he could do anything. 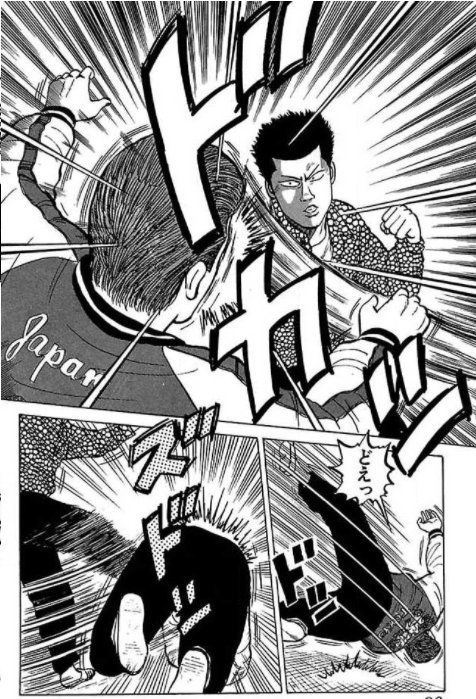 At first, Hiromi hit Bouya and seemed to have the upper hands but Bouya quickly recovered and sent Hiromi flying with his freakishly strong punches. Then, he proceeded to knockout Akutsu’s gang to avenge Yasuda as promised. 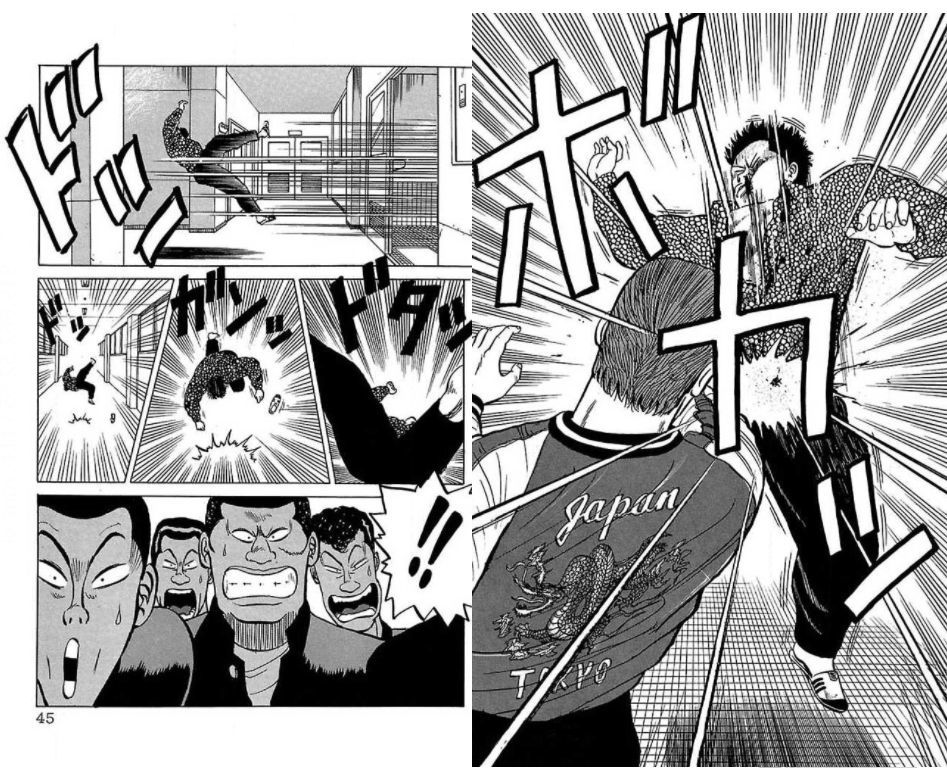 Later, Bouya returned Yasuda’s stolen uniform and talked with him on the rooftop. Yasuda told Bouya that defeating Akutsu didn’t mean anything since he was just an underling and at this Crows School, he wouldn’t get by just by being a little bad.
Hearing that, Bouya said that he would rather be a crow than a poor caged bird that forgot how to fly. 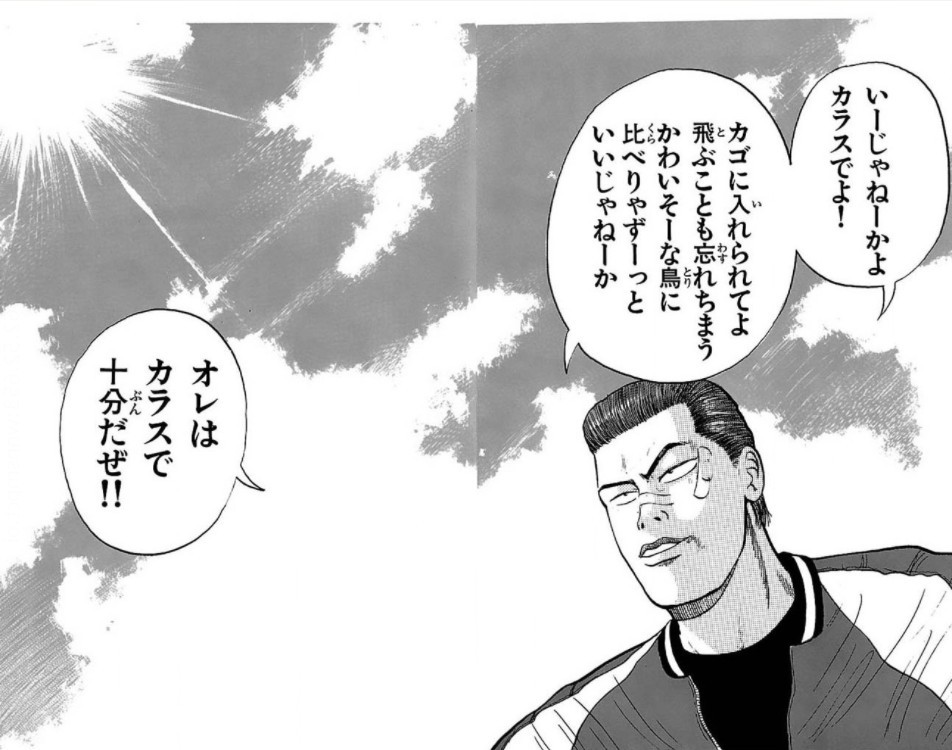 The school teacher later discovered Akutsu’s gang all beaten up and lying unconscious on the restroom floor. When they regained consciousness, Akutsu reported the incident to his senior Yamazaki Tasuya and was ordered to get rid of this troubling transfer student.
Akutsu trembled in fear as he already got a glimpse at Bouya’s real strength. And not just him, Hiromi also recognized Bouya and his monstrous fighting power.
Many tough challenges still lie ahead awaiting Bouya as he would come head-to-head with Suzuran’s strongest fighters......
Crows
▸
Crows, Takahashi Hiroshi