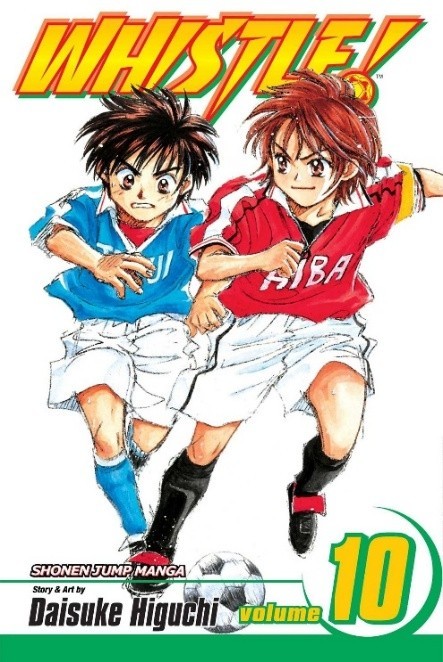 Whistle! is a Japanese sports franchise written and illustrated by Daisuke Higuchi.
It was published in Shueisha’s Weekly Shounen Jump, and its chapters are compiled and published into 24 separate volumes. A sequel called Whistle! W, was published in Ura Sunday and MangaONE web platforms, from 2016 to 2021.
An anime adaptation of the manga was also released, with the thirty-nine-episode series adapted by Studio Comet.
Whistle!
▸

The manga Whistle! is about a middle schooler named Sho Kazamatsuri. He transfers schools in hopes to make the soccer team. He was always left out due to his short stature at his old school. The story follows Sho as he struggles to improve his skills so that he can make the team at his new school and ignore the disadvantages he has due to his small physique.
We start off by seeing Sho return from early morning practice and checking his height. He goes off to wake someone up, who seems to be letting Sho stay over at their place since he changed schools. After waking them up for breakfast, Sho leaves for school. 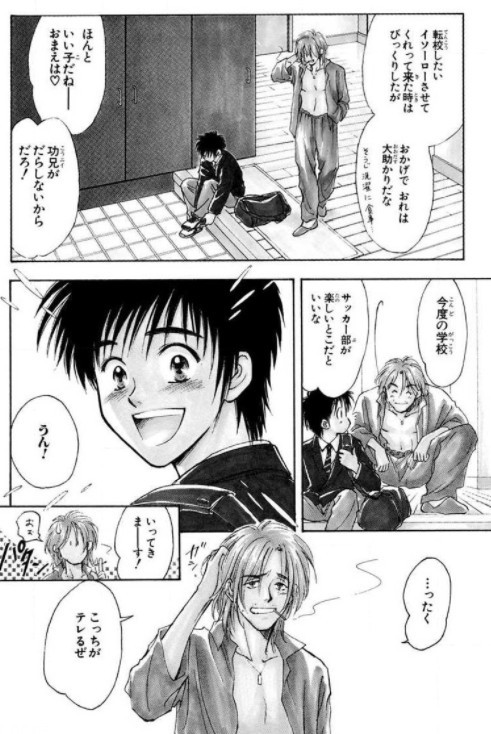 Yuki, Sho’s new class teacher, greets him with a celebration on his first day at the new school. She mistakenly introduces Sho as a starter of his previous school’s soccer team, which shocks Sho. 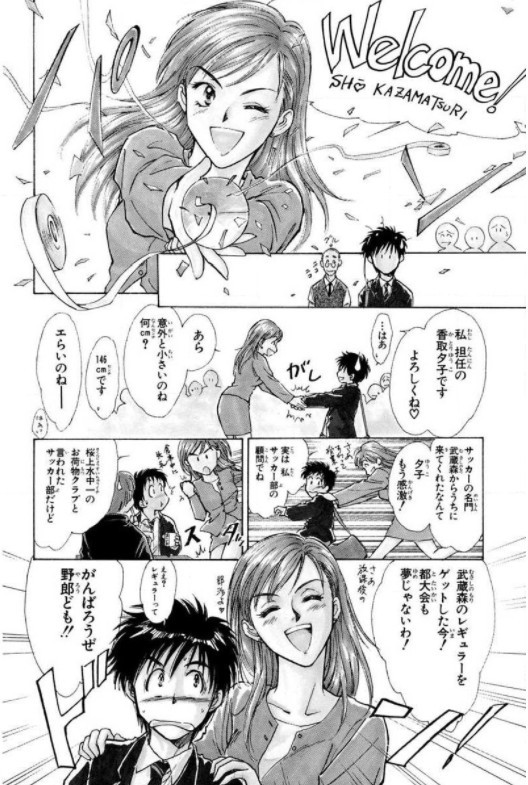 Everyone on the soccer team is excited to practice with Sho. While they’re caught up in this misunderstanding, Sho see’s Tatsuya practice. Another one of the boys tells Sho that Tatsuya is the kind of exceptional player that can play any position. All the boys give Sho an extreme amount of respect just because they know that he came from a prestigious soccer school. 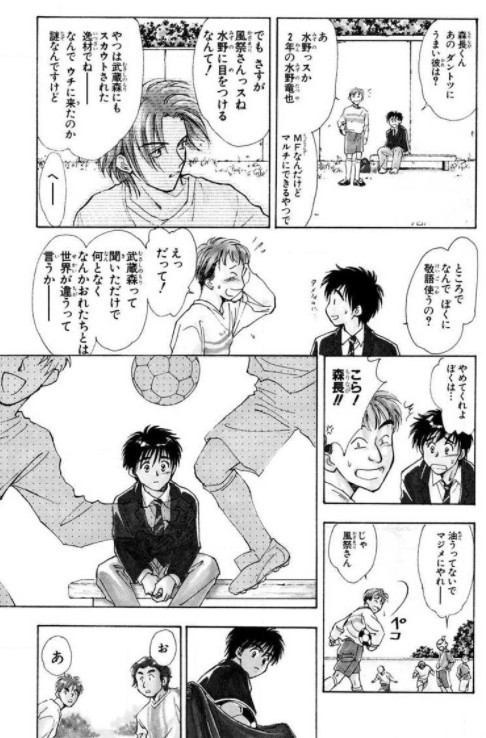 While the others are busy with their practice, Sho starts lifting. Since he was only a substitute in his old school, he only got the chance to practice liftings. Everyone starts looking at him. 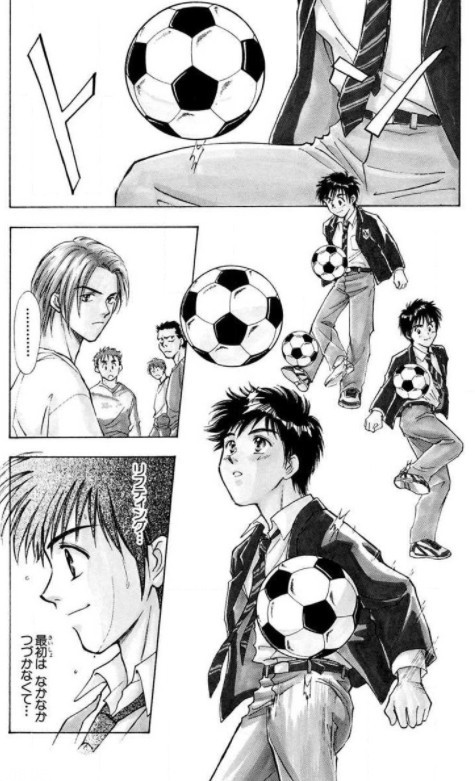 They invite Sho for a mini-game, and it becomes apparent on the field that Sho doesn’t know how to play. Tatsuya says that he also wasn’t on the main team in his old school. Embarrassed, Sho tells them that he was just a substitute and runs off. 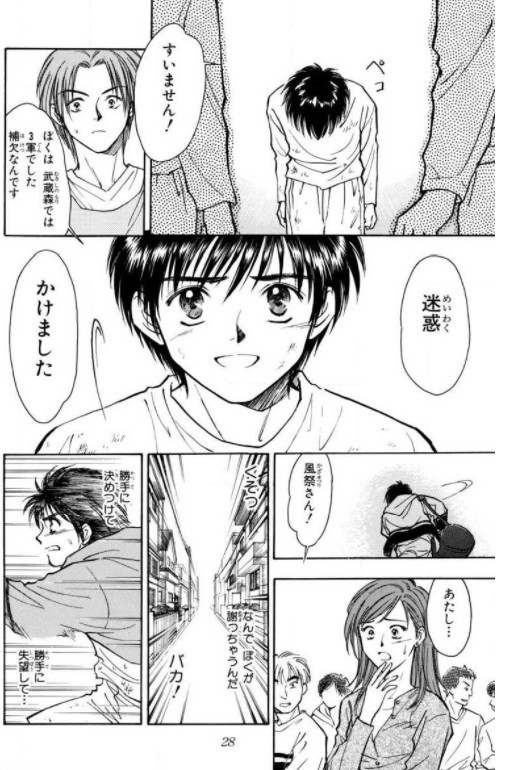 Sho comes across his older brother. He tells him that it’s nothing and keeps running. He has thoughts about quitting soccer but he then remembers that the reason he changed schools to begin with, was so that he could play soccer. 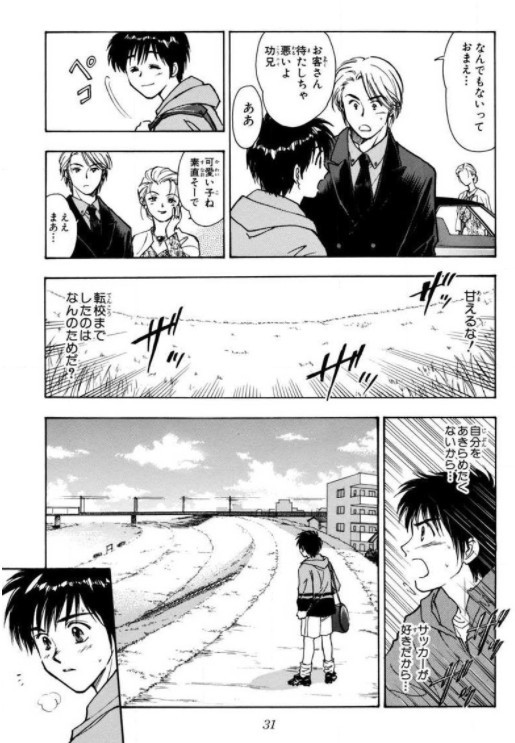 In the next scene we see Sho practicing in isolation. He wants to improve so that the others will respect him. His brother is concerned so he comes looking for him but upon seeing that Sho is engrossed in practice, he leaves without saying anything. 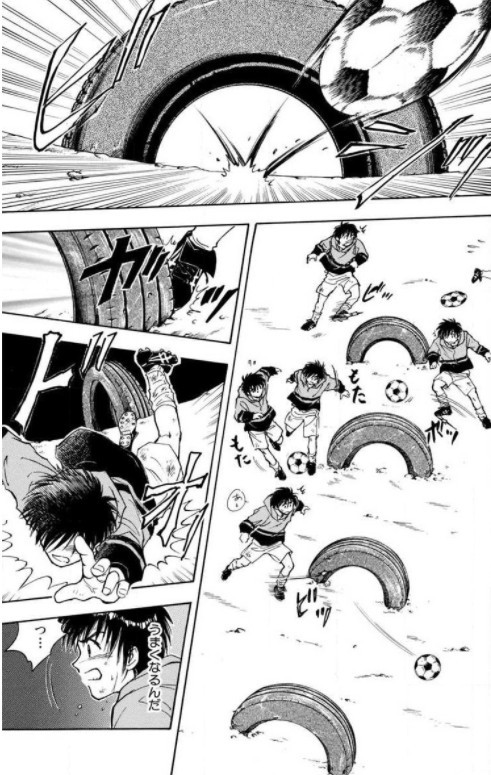 Sho’s brother goes to his school the next day to clear up the misunderstanding. He uses his charms to persuade Sho’s teacher to overlook his absence for the next few days. While leaving he hits on Sho’s teacher and she falls for his charms. 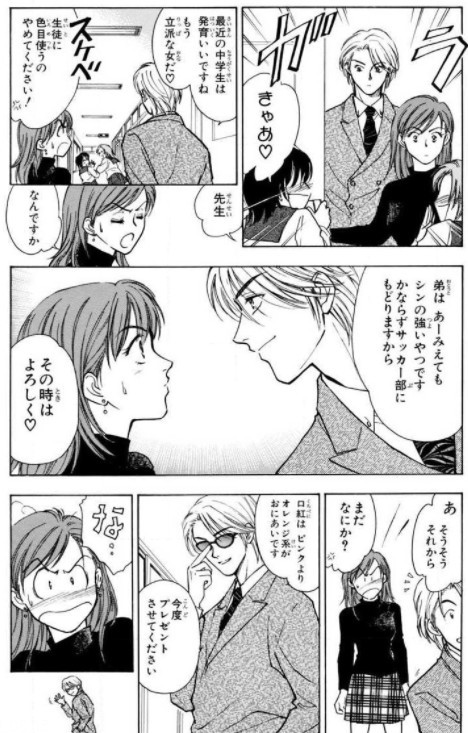 A week goes by while Sho skips school for practicing soccer. His brother is taking care of him while he practices all day. While passing by the field, Tatsuya notices Sho, practicing. Tatsuya agrees to a one-on-one against Sho. 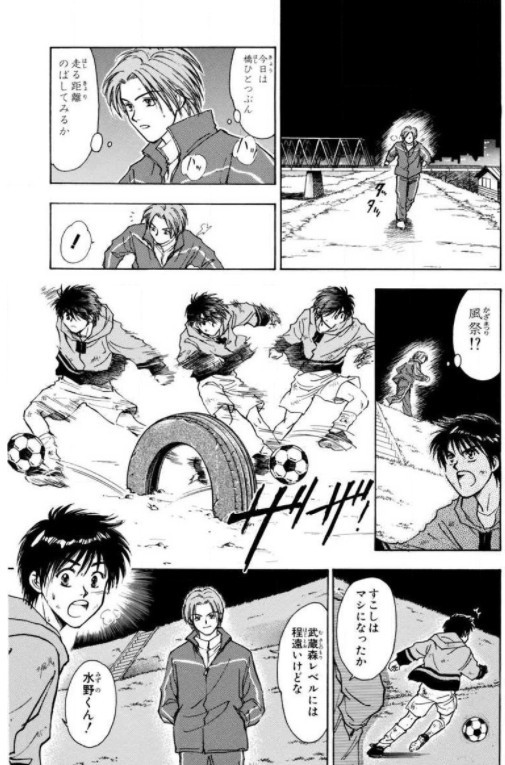 Sho returns home with a smile on his face, telling his brother that someone accepted to play against him, even though he lost. He starts crying because in the face of his final goal, this is a very small obstacle and he needs to overcome it. 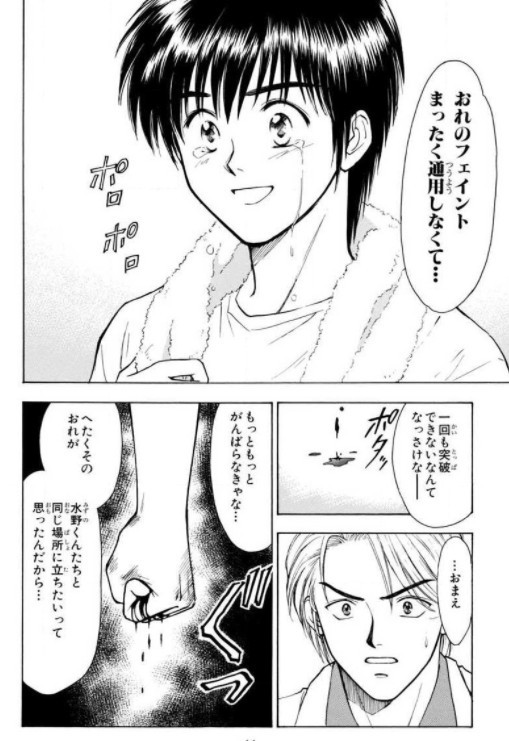 Sho’s brother really respects him for following his dreams. Unlike him, Sho stuck to his dreams even when all the odds were against him. He motivates Sho to have faith in himself and to not admit defeat. 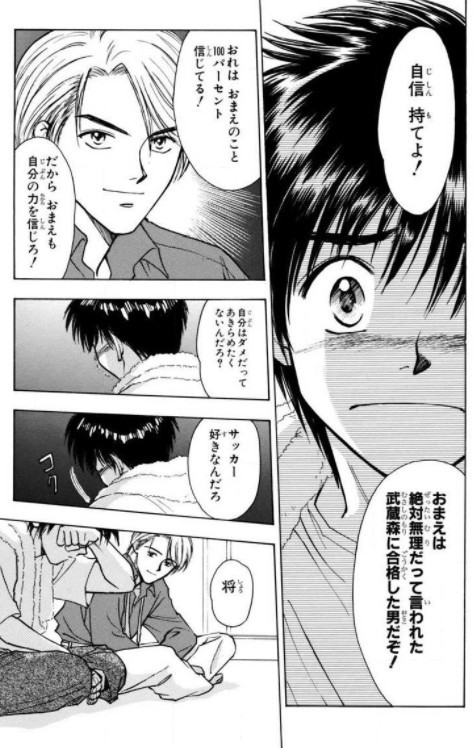 Sho’s brother gives him a video recording of some soccer techniques. Sho spends all night practicing the skills and challenges Tatsuya to a one-on-one again as he’s passing by. 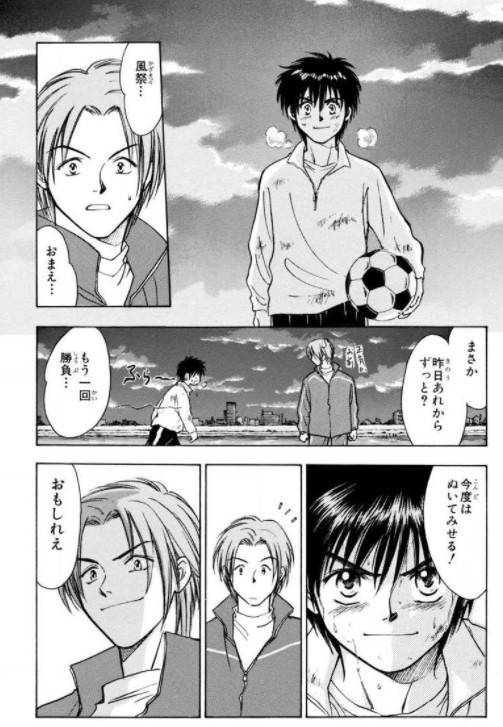 With the help of his intense training and Unbreakable will, Sho finally manages to break through Tatsuya’s guard using his newly learnt skills. He is extremely ecstatic at this accomplishment. 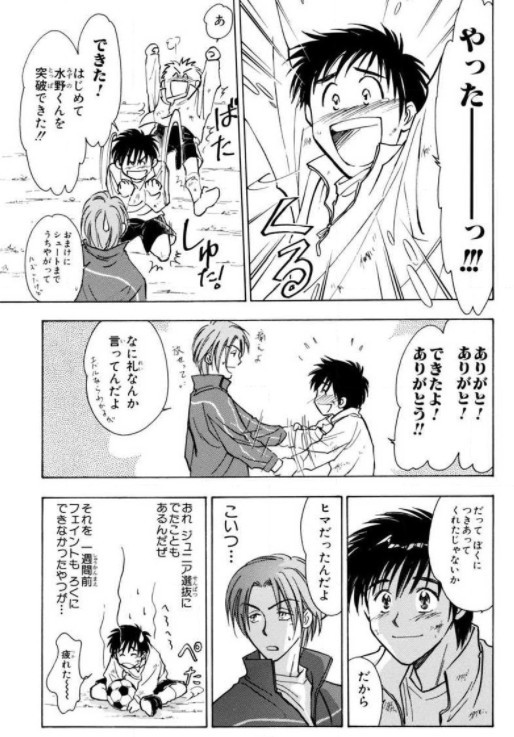 Sho’s brother comes home and see’s Sho fast asleep at the entrance. He picks him up and sees a big smile on his face, indicating that everything went well. 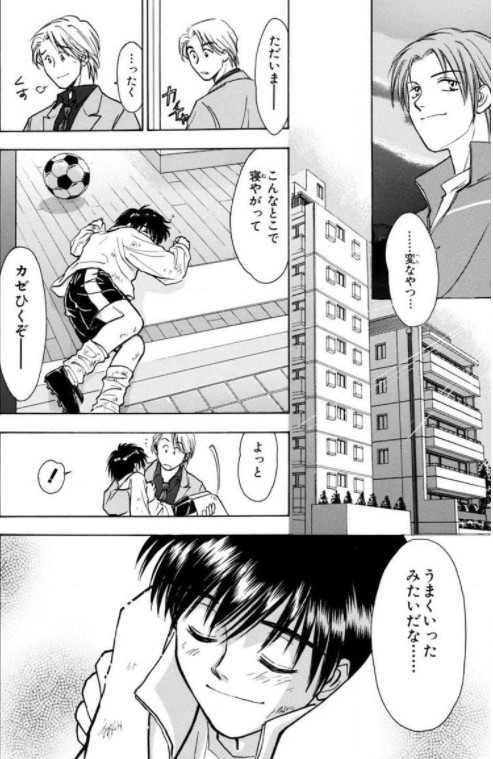 Can Sho learn how to play and compete against the others?
Whistle!
▸
Whistle!, Higuchi Daisuke