What is Nichijou about? 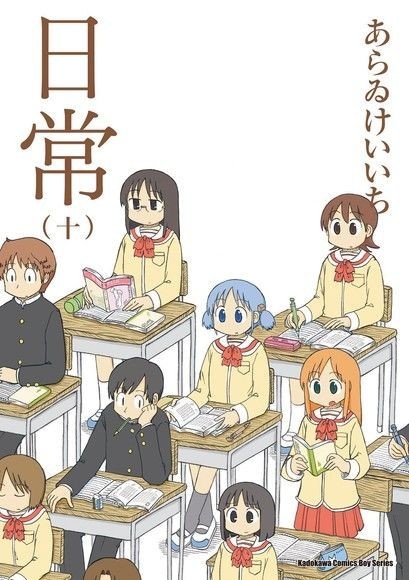 Nichijou (literally translated to “Everyday”) is a comedy manga series written and illustrated by Keiichi Arawi. The manga has been serialized from December 2006 in Shonen Ace magazine by Kadokawa Shoten, with a total of 10 volumes. Nichijou was also serialized in Comptiq magazine by Kadokawa Shoten from March 2007 to July 2008. After a six year pause, the manga has finally begun serialization again in 2021.
When Nichijou first began, Keiichi Arawi used a combination of normal manga format and four-panel strips called “Yonkoma”. The manga achieved huge success with young demographic thanks to its brilliant humor that features moments from the cast’s everyday lives which alternates between the mundane and the strange, without ample focus on a narrative. In 2014, Nichijou was selected by world-famous film director Guillermo del Toro as one of the top manga for Asahi News’ SUGOI Japan project.
The manga was adapted into an OVA titled Nichijou Episode 0 in March 2011. Later, it was made into a 26-episode anime series, directed by Tatsuya Ishihara and produced by Kyoto Animation, and was broadcasted on TV Aichi from April to September 2011. The anime was also re-edited into 12-eposiode series and aired on NHK Educational TV in January 2012.
Nichijou also inspired a PlayStation Portable game by Vridge and Kadokawa Shoten named Nichijou: Uchuujin. It was released on July 2011.
Nichijou
▸

The story of Nichijou started with a rather sudden crash. Nano Shinonome, a timid girl with a giant screw sticking out from her back, discovered that she had duty at school. Before rushing off, Nano told a little girl still in her pajama to make breakfast on her own.
That little girl is Hakase, a young scientist with outstanding intelligence and also Nano’s creator. Her real name remains unknown and Nano would keep on calling her “Hakase”, which only means “Professor”. Nano is an android created by Hakase but she has always wanted to live as a normal human girl. She attended school and tried hard to hide her real identity. 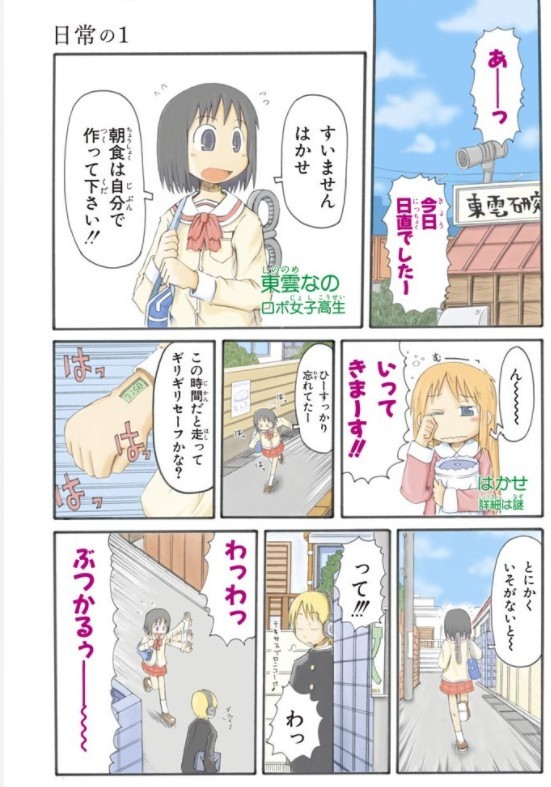 That morning, she ran out from the Shinonome Lab, where she was living with Hakase. Right out of the house, Nano bumped into another student who was wearing a headphone.
The collision had such a strong impact that it left several objects, such as a Kokeshi (wooden Japanese doll), an Akabeko (a traditional toy inspired by a legendary cow from the Aizu region), and a piece of salmon flying in its wake. 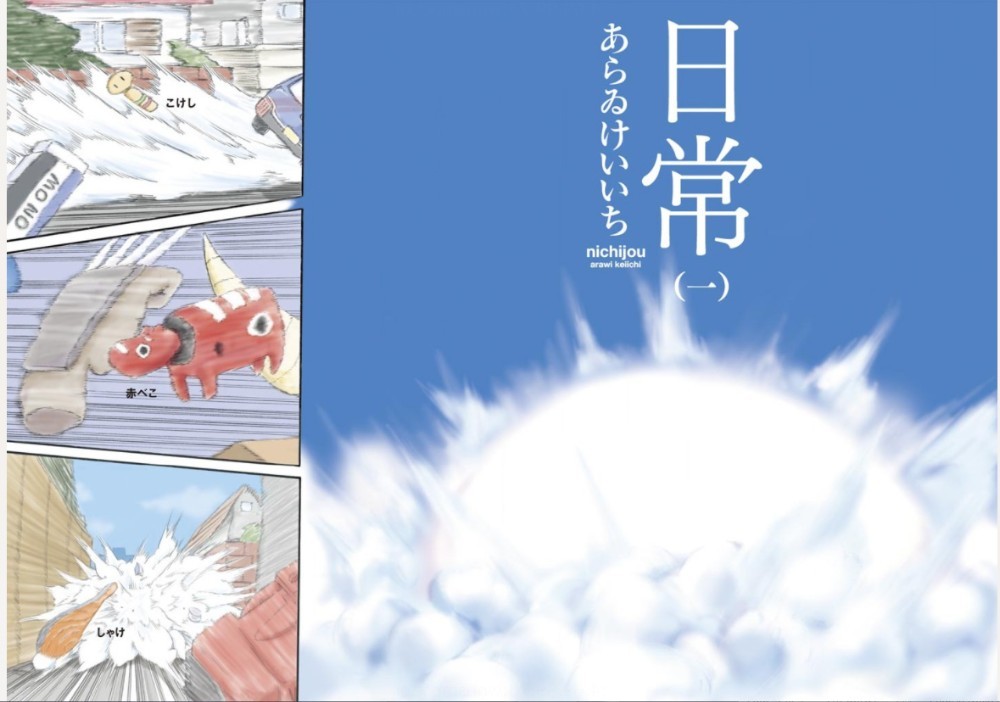 Meanwhile, Yuuko Aioi was meeting up with her best friend Mio Naganohara, who ignored Yuuko's “Selamat Pagi” greeting. Both Yuuko and Mio belongs in the cast of main characters of Nichijou. Yuuko is an energetic girl with short brown hair and she seems to always attract negative things, no matter how illogical the circumstances are. Whereas, Mio is a cheerful girl with bright, blue hair that is always tied by two small wooden cubes.
Yuuko turned to Mio as she heard Mio mentioned that the weather forecast predicted there would be rain even though the sky was clear. “You never know”, Yuuko laughed, “Hail could suddenly start falling”. 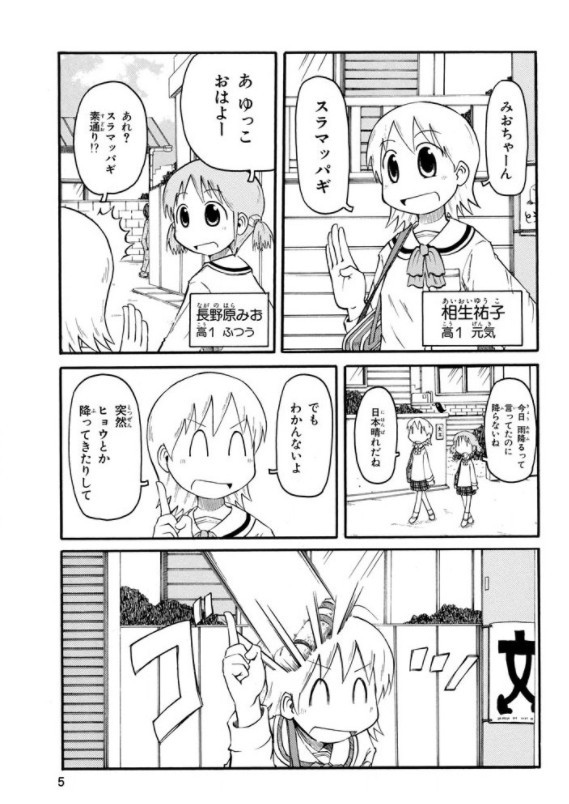 Right at that instance, the objects sent flying by the earlier collision landed on Yuuko’s head. First the wooden doll, followed by the cow toy and finally, a piece of salmon. 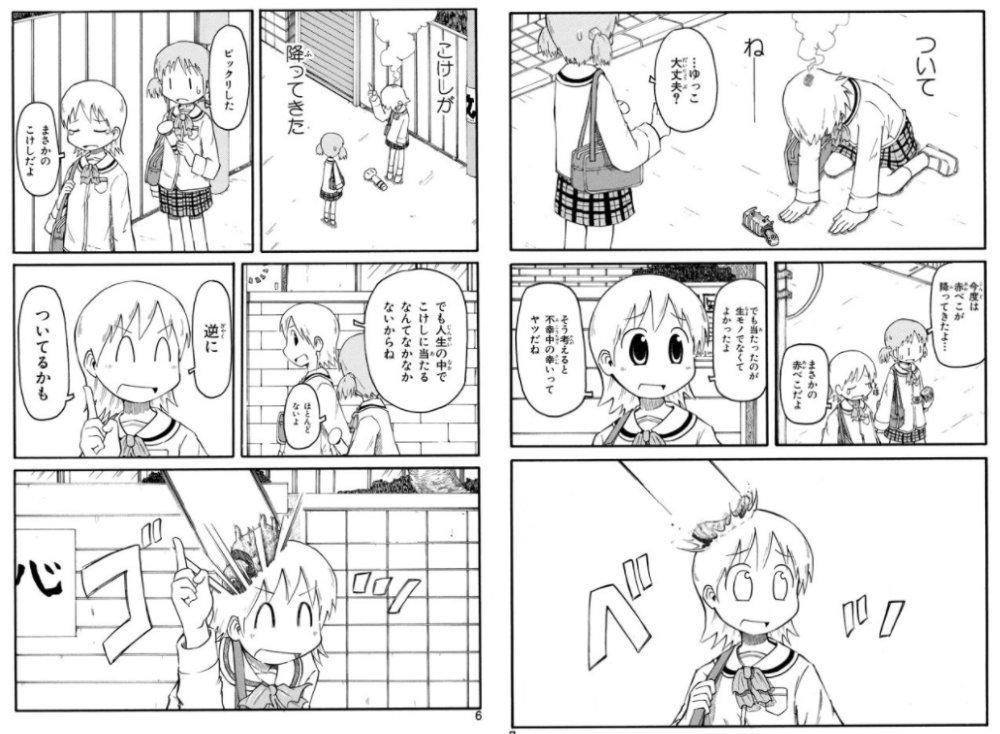 Mio stood and stared at her friend in shock while Yuuko could only cry about the bizarre incident that befell her. 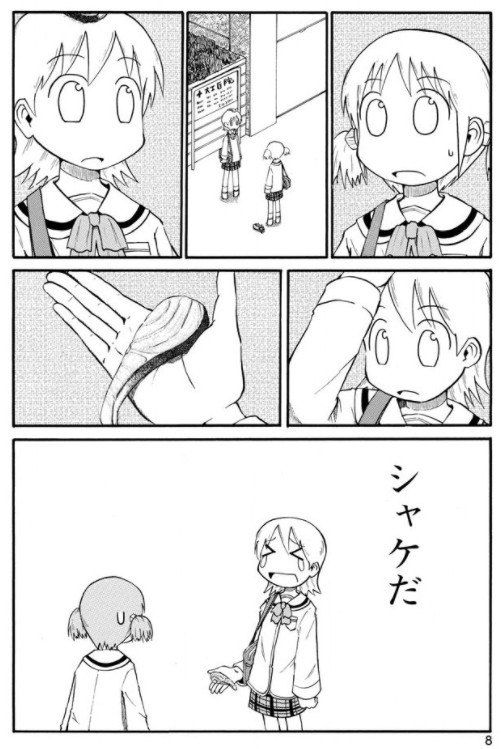 On the nearby roof, Nano finally regained her senses after the collision, smoke came out from her mouth. She didn’t know where she has flown off to and didn’t have a clue on how to get down from the roof. At last, she noticed that her bag, shoes and even her arm were missing. The only thing she could care about at that moment was people finding out about her being a robot. 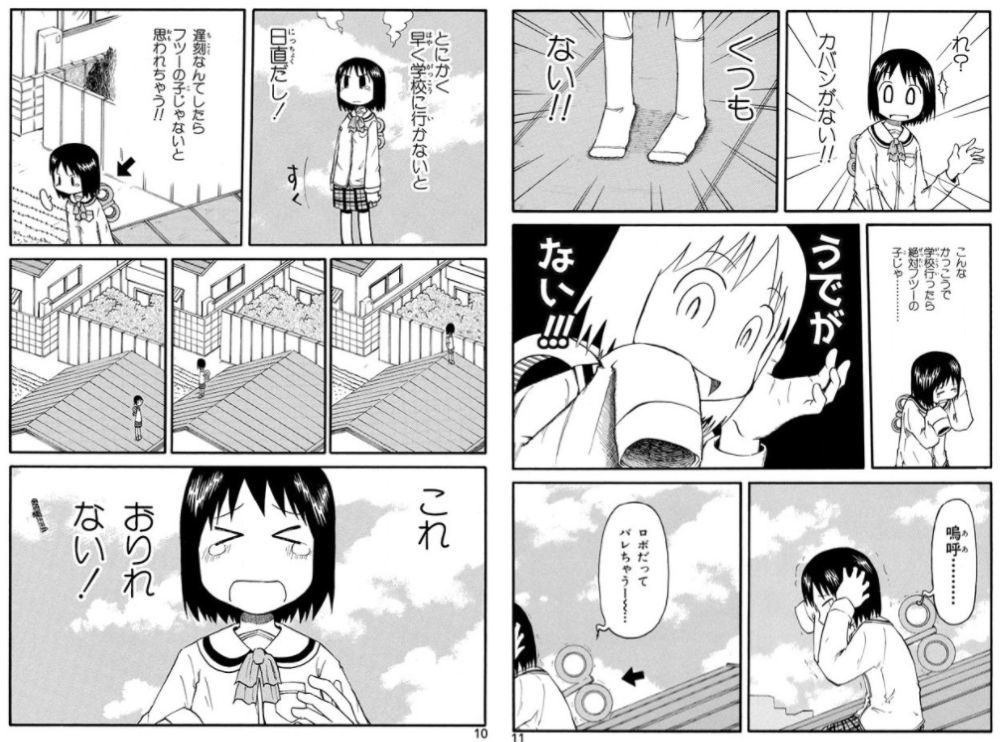 At school, Yuuko and Mio met Mai Minakami, who responded to Yuuko's Malay greeting by saying “Selemat Malam”. She said it wrong with a hilariously calm face. Mai is also one of the main characters and a trio of best friends with Yuuko and Mio. She is a quiet girl but really intelligent and has many hidden talents. 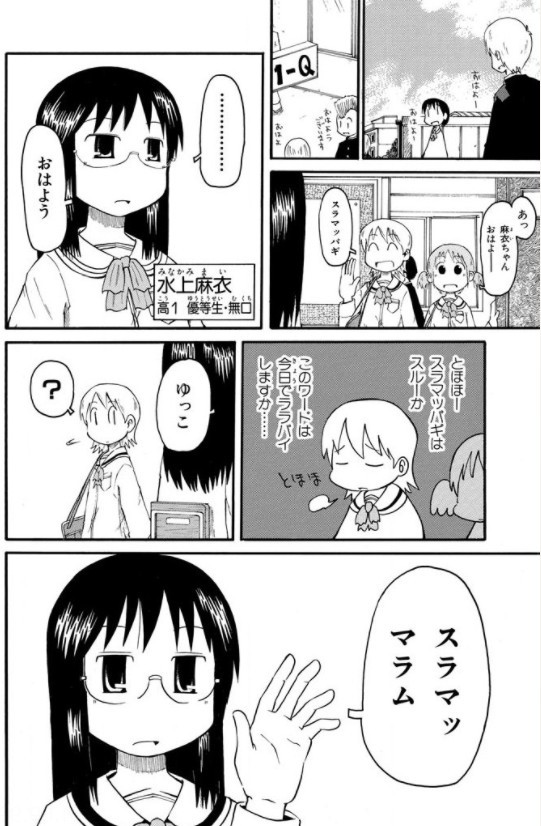 As the homeroom teacher Ms. Izumi Sakurai called for attendance, she reminded everyone to talk to her if they know why Nano was absent. At the back of the class, Yuuko told Mio that it was rare for Nano to be late and that she might have “malfunction”. It appeared that even though Nano tried hard to hide, her classmates still found out that she was a robot. Yuuko also teased Mio about another secret, that she knew Mio was crushing hard on one of the upper classmen Koujirou Sasahara. 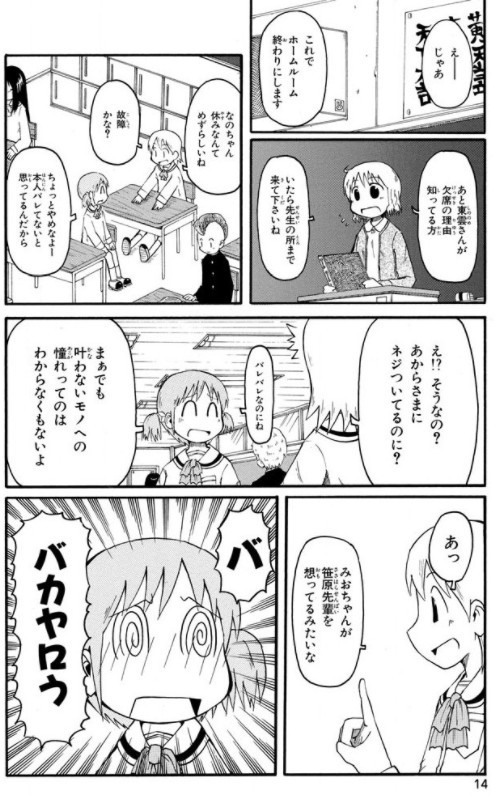 At the moment, on a random roof, Nano was trying to get down while the male student that bumped into her was sent flying onto another roof. He was in fact standing on top of a chimney of a communal bath without any idea on how it happened. 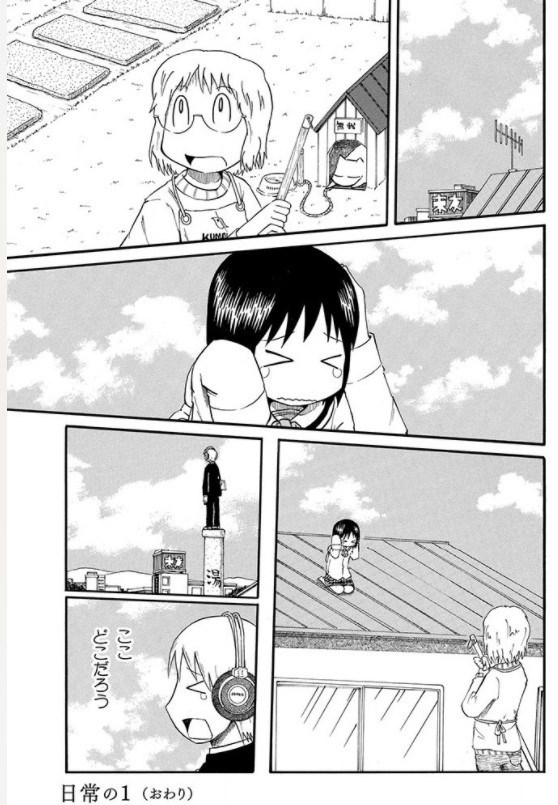 Read on as the bizarre and wonderful daily lives of these high school students start to unfold in the stories of Nichijou!
Nichijou
▸
Nichijou, Arawi Keiichi