What is ARIA about? 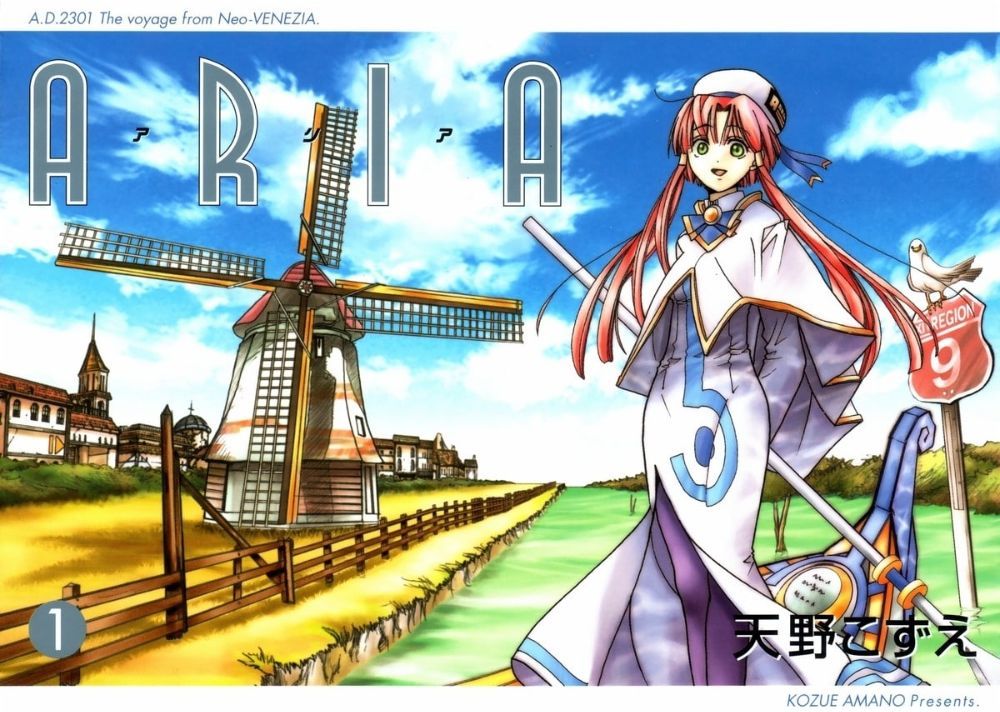 Aria is a light-hearted fantasy manga series written and illustrated by Amano Kozue. The series was originally named “Aqua” – after the planet where the story was set on. After switching from Enix’s Monthly Stencil magazine, the story was transferred to Mag Garden’s Comic Blade, where it was renamed and continued serialization. Aria consisted of 12 volumes, from 2001 to 2008.
The series was adapted into several anime television series and featured movies. The first season of the TV series was broadcasted in 2005, followed by a second season in 2006 and the final season in 2008 that ended alongside the original manga serialization. In 2015, the second OVA was released to celebrate the series’ 10th anniversary. In 2021, the series reached its 15th anniversary, two featured anime movies were released in March and December 2021 to commemorate this milestone.
Set in the far future of the 24th century, on a planet named Aqua (formerly known as Mars before the terraforming), the story follows a young girl named Mizunashi Akari on her way to become an Undine, or Aqua’s gondoliers. Within a city filled with canals and easy-going people, the story will take readers on a calm and optimistic journey, with beautiful art and heart-warming soundtrack.
Official trailer for Aria’s second featured movie “Aria the Benedizione”
ARIA
▸

Aqua – The Planet of Water

In the year 2301 AD, humankind had conquered the planet of Mars. 150 years since Mars was terraformed, human had melted the polar ice caps and covered 90% of the planet surface with water. Ever since then, people had come to call it the planet of water – “Aqua”. 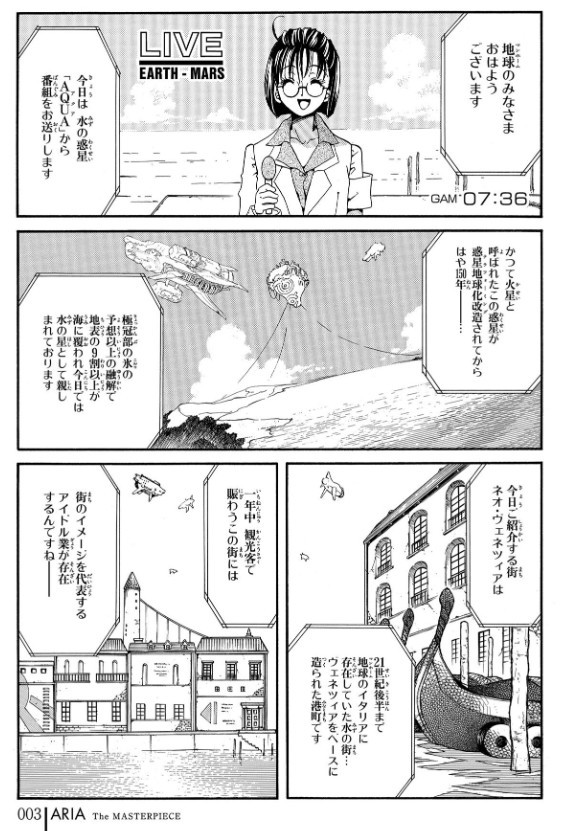 One of Aqua’s most well-known city and tourist’s attraction spot, the city of Neo-Venezia was modeled after the famous Venice. Neo-Venezia had welcomed millions of tourists all year round since its birth. And to accommodate its guests, the city was represented by a unique occupation. The job from the olden days, the one who took visitors on tours around the city on gondolas – they were called “Undine”. 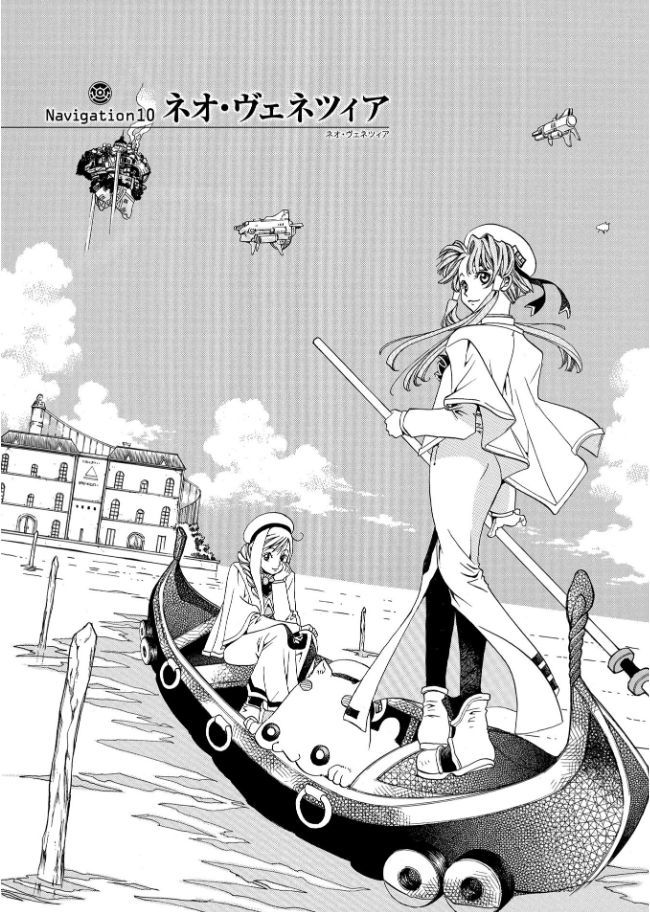 It has been 11 months since Mizunashi Akari had arrived in Neo-Venezia to study and become an Undine. She had been working for the Aria Company, a service provider that represented the Undines. Today would be the first time she experienced autumn on Aqua. 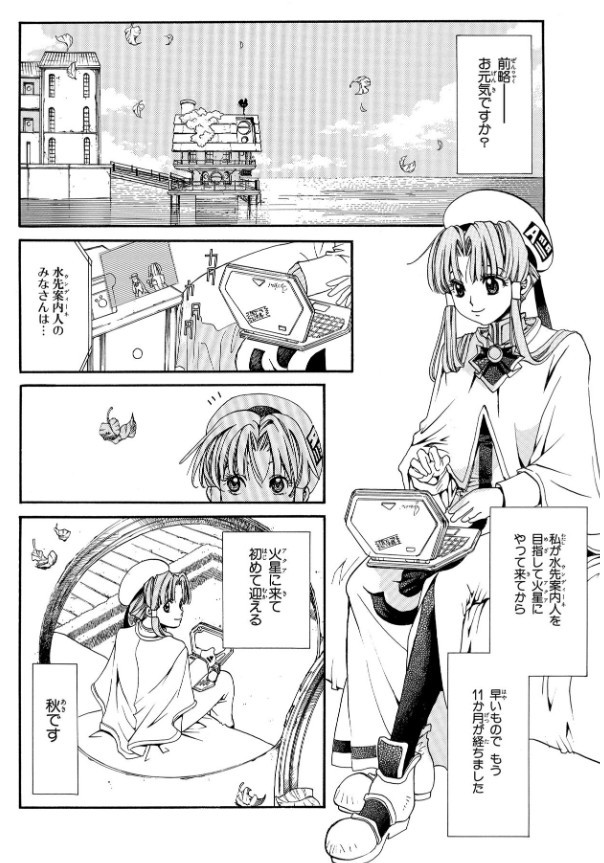 While admiring the new winter attire of her company in the mirror, Akari was greeted by her mentor, Alicia Florence. Alicia and the company’s mascot, a blue-eye cat that given the title “President”, had come to take Akari out for practice. 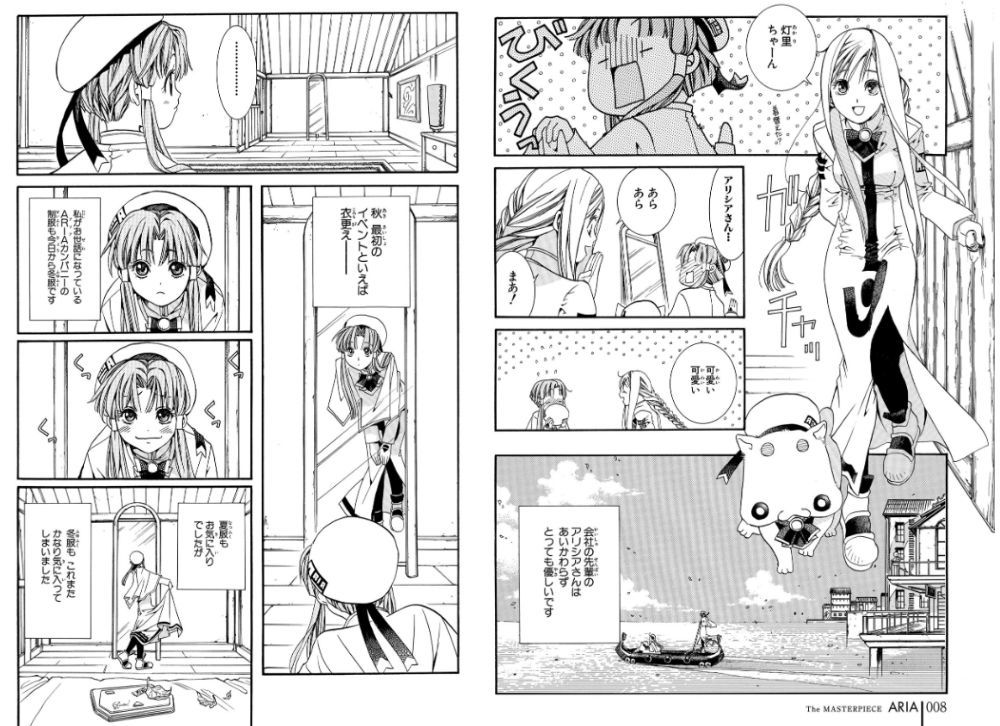 When the pair arrived in the downtown district, Akari took off to send the letter she had been writing to her friend. On the way, she met an old tourist who asked for the direction to the police station. He claimed his daughter and son-in-law were lost and he was on the way to find them. 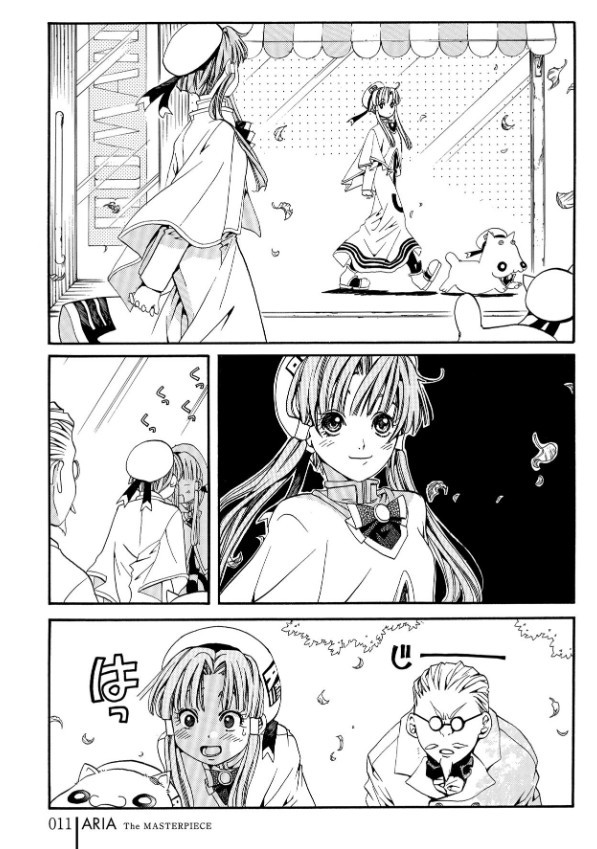 Seeing the old man in trouble, Akari offered to help him find his company. As the streets in Neo-Venezia was extremely complicated, one would easily get lost without the help of the local, or better yet, an Undine’s. 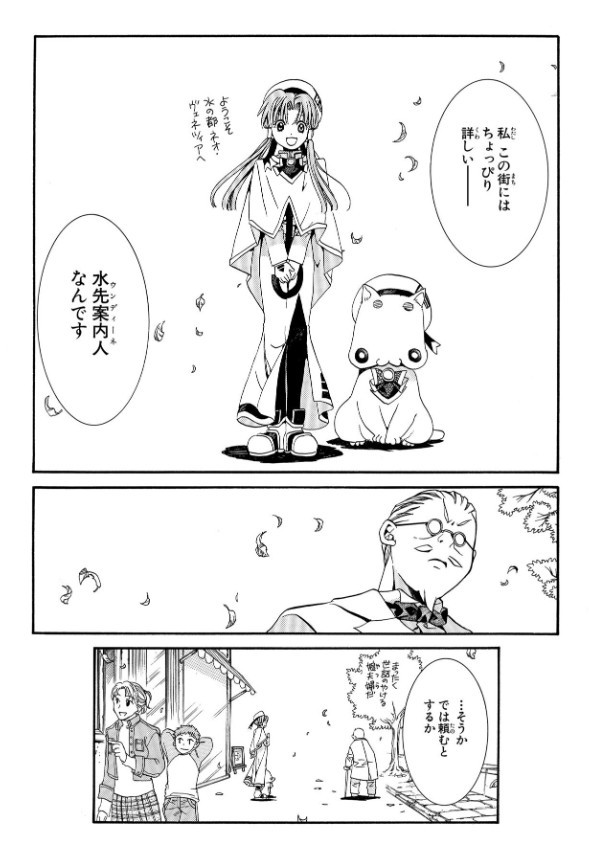 While taking the old man around looking for his daughter and son, Akari took the time to introduce the planet Aqua to him. Apparently, the solar rotation on Aqua is double that of Earth’s, so there were 24 months in a year. It was now the 19th month, marking the start of autumn. 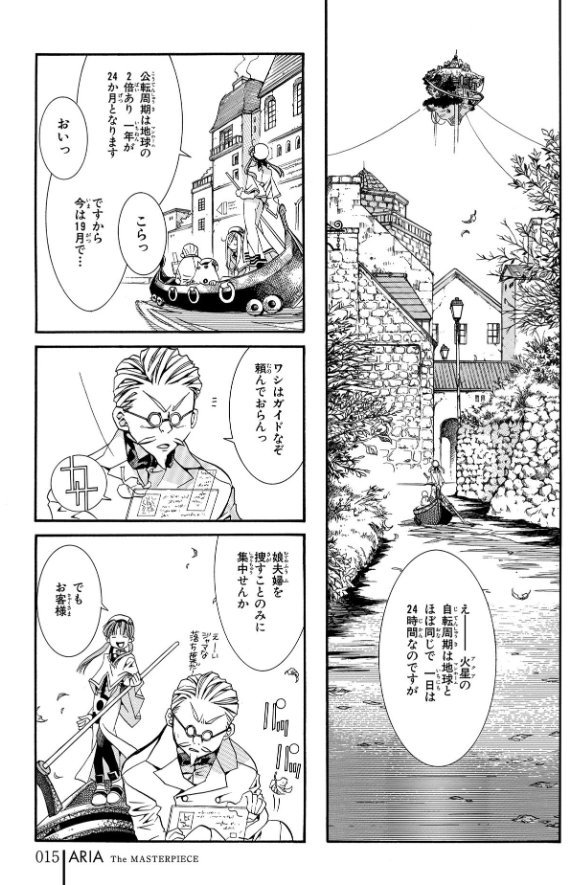 Compared to Earth at the time, Aqua’s technology was a century behind. It was often considered by the people from Earth – in this case the old tourist, to be a very inconvenient place. Everything would have to be done by hand, including cleaning, laundry, cooking...... 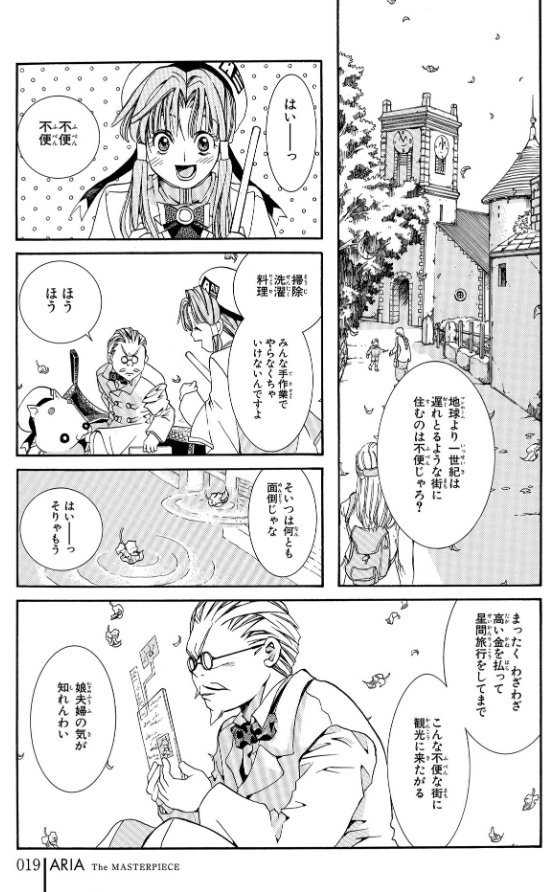 The rivers and roads were had to navigate, Akari remarked that even she got lost sometimes in the city. But that was what made Aqua so different from the highly advanced Earth. In Earth’s cities, even if one wanted to get lost, they would be unable to. 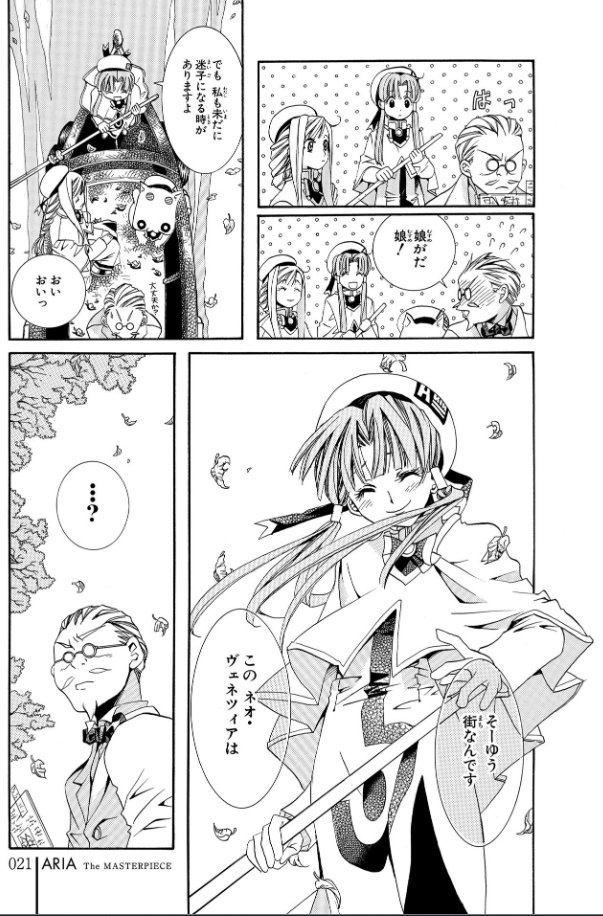 While floating on the river, a loud growling noise came from the old man’s stomach. Akari stopped at a buttered potatoes shop vendor on the riverbank and ordered food for everyone. 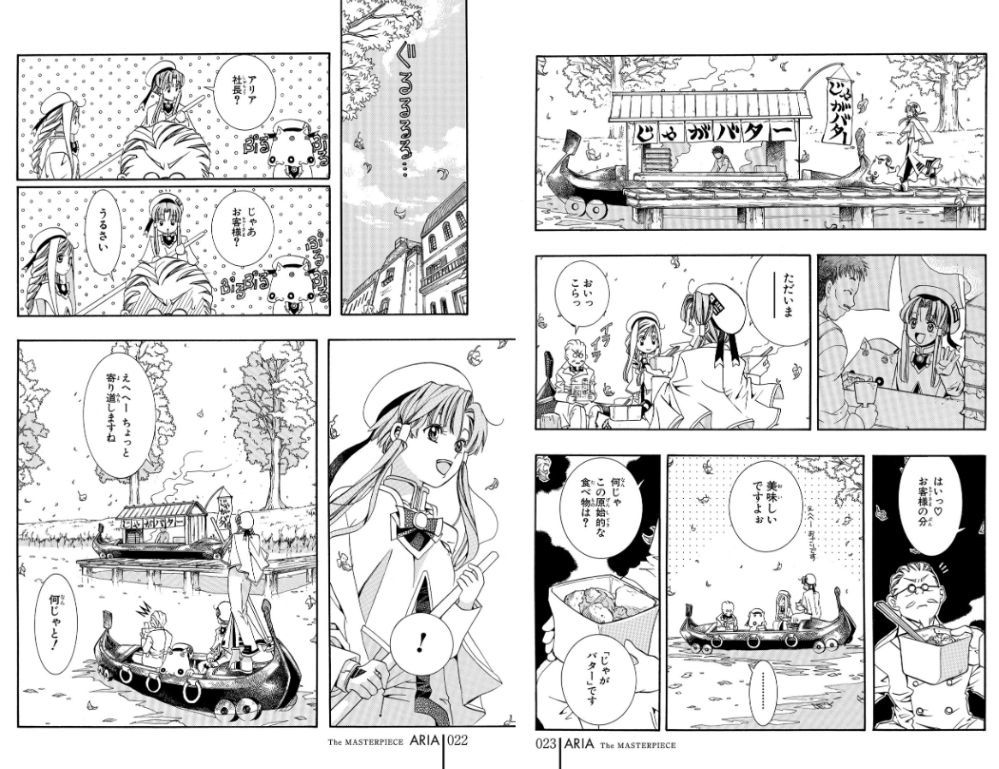 Tempted by the delicious smell of freshly baked buttered potatoes and a growling stomach, the old man reluctantly accepted Akari’s offer. Together they enjoyed the food and tea amidst the falling autumn leaves. 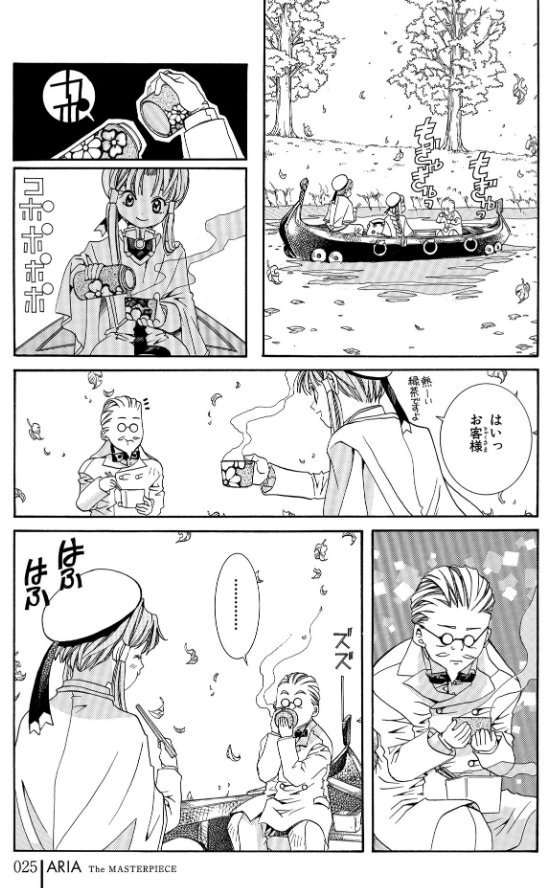 The old man asked Akari why she would choose to leave Earth to such an inconvenient planet. To which she simply replied because she would never find such great buttered potatoes on Earth. The “inconvenience” was what made she happy here. 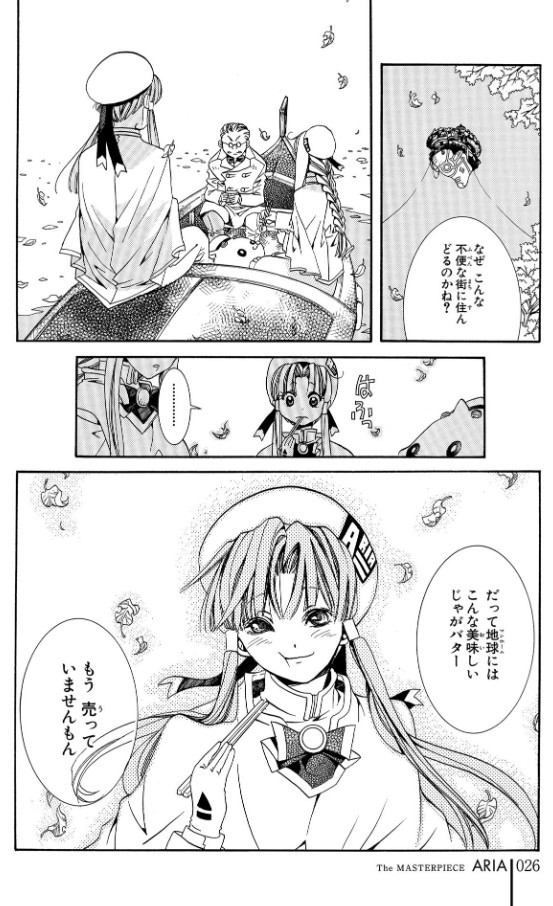 Before he knew it, the old man was taken along with Akari’s pace, forgetting his daily worries and works to ask for another cup of tea from her, while silently enjoy the sound of falling leaves and water. 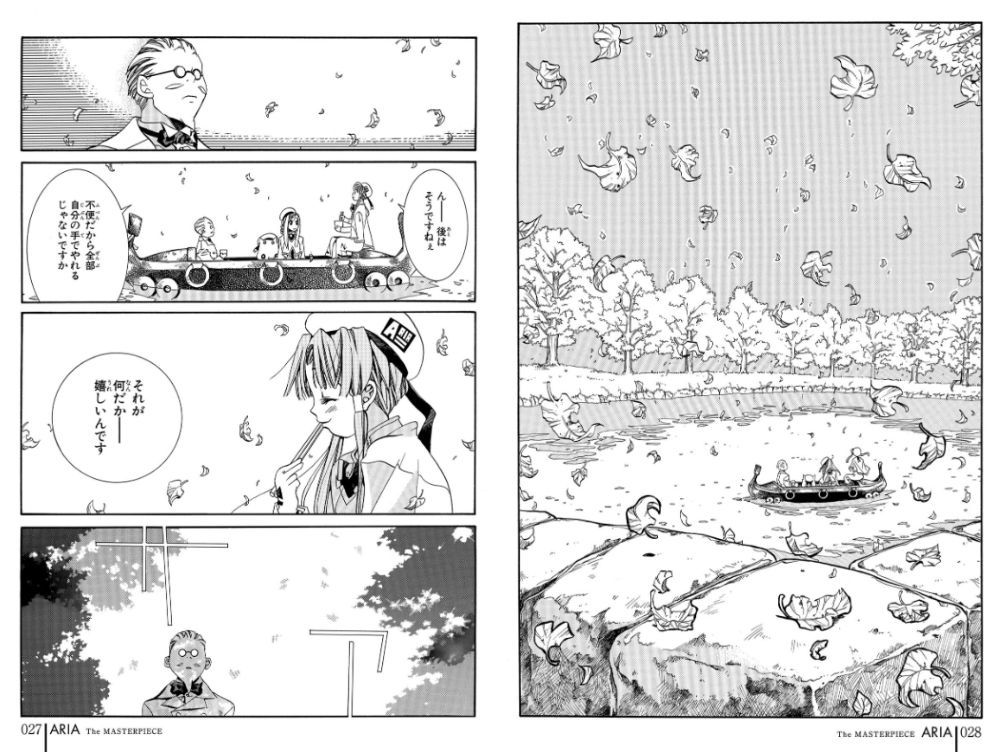 Read on to enjoy the scenic city of Neo-Venezia on Akari’s gondola in the next chapters of Aria. The journey awaits!
ARIA
▸
ARIA, Amano Kozue