What is Tenisu no Ouji-sama about? 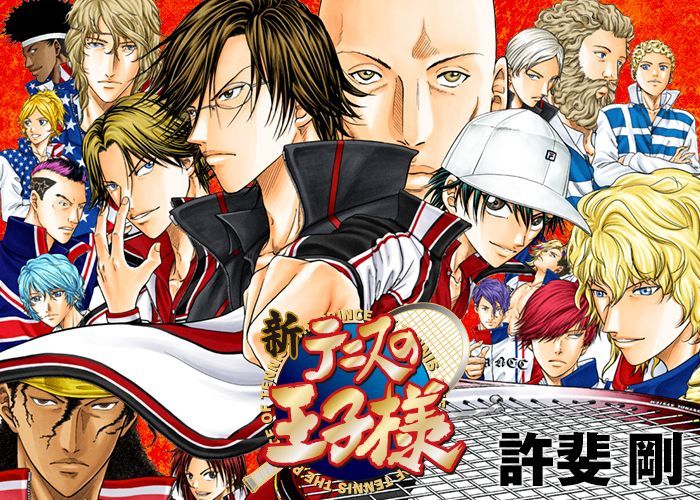 Tenisu no Ouji-sama (The Prince of Tennis) is a manga series written and illustrated by Takeshi Konomi. In Japan, the manga title is often shortened to “TeniPuri”, a mix of the words “Tennis” and “Prince”. It was serialized in Weekly Shonen Jump from July 1999 to March 2008, with a total of 42 volumes. A sequel to the manga, named The New Prince of Tennis, was serialized from March 2009 and currently on-going in Jump Square by Shueisha.
At one point, The Prince of Tennis was known as the most popular sports manga in Japan. As of January 2012, the manga had over 51 million copies in circulation. Following the success of manga, The Prince of Tennis later became a hugely successful franchise. Its universe spanned from radio show, several video games to an impressive number of 300 music CDs.
A 178-episode anime adaptation by Trans Arts, co-produced by Nihon Ad Systems and TV Tokyo, was broadcast on TV Tokyo from October 2001 to March 2005. A sequel of three OVA series were released from March 2006 to January 2009. Not only anime TV series, The Prince of Tennis also inspired more than 15 stage musical adaptations, 1 anime film (2005), 1 live-action film (2006) and a 3D computer graphics (3DCG) film premiered September this year.
Ryoma! Shinsei Gekijoban Tenisu no Ouji-sama Special Video
Prince of Tennis (Tennis no Ouji-sama)
▸

The story of The Prince of Tennis started with a 12 year-old girl named Ryuzaki Sakuno. She was sitting on the train going to the direction of Kakinokizawa Junior School for their tennis tournament. Sakuno was troubled by a bunch of high school students loudly laughing and chatting besides her. Sasabe, a big guy holding a tennis racquet, was bragging about his knowledge of a gripping technique in tennis called the Western Grip to his friends. 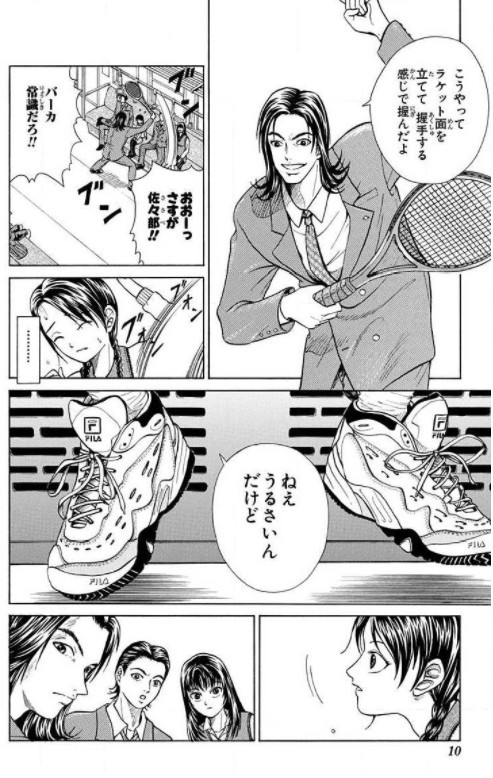 Another kid sitting in the seat opposite to them told him off. That kid was Ryoma Echizen. Despite being so loud and confident, it appeared that Sasabe was entirely wrong and mistook the Western Grip with another technique called the Eastern Grip. 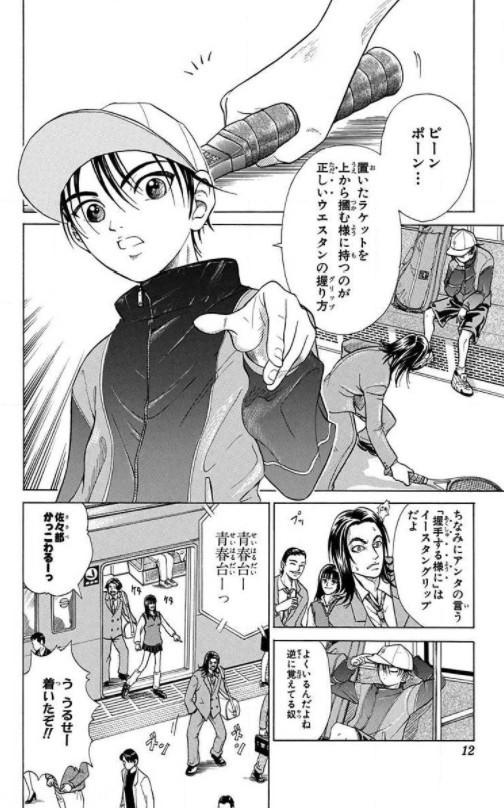 After being corrected by a kid, Sasabe was embarrassed and rushed off with his friends.
While waiting for her grandma on the platform after the incident, Sakuno spotted Ryoma. He asked her for the directions to Kakinokizawa Junior School. She accidently gave him the wrong directions of the south gateway instead of the north gateway. 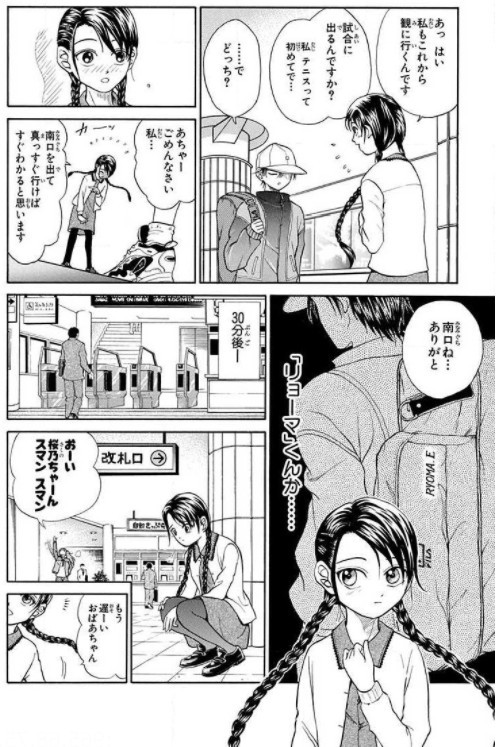 When Sakuno’s grandma arrived 30 minutes later and picked her up, she was told that the right exit would be north gateway. If a contestant was late for the match, he or she would be disqualified immediately. In the car heading to the tournament, Sakuno’s grandma also told Sakuno that the only reason for her to attend these novice matches was because of her former student’s son. It was rumored that the kid was only 12 year-old but qualified and was about to compete in the 16 year-old group.
At school, Sakuno ran off to find Ryoma and finally found him lying on the grass. He was indeed disqualified for being 5 minutes late. She apologized to him and offered to buy him something to drink. 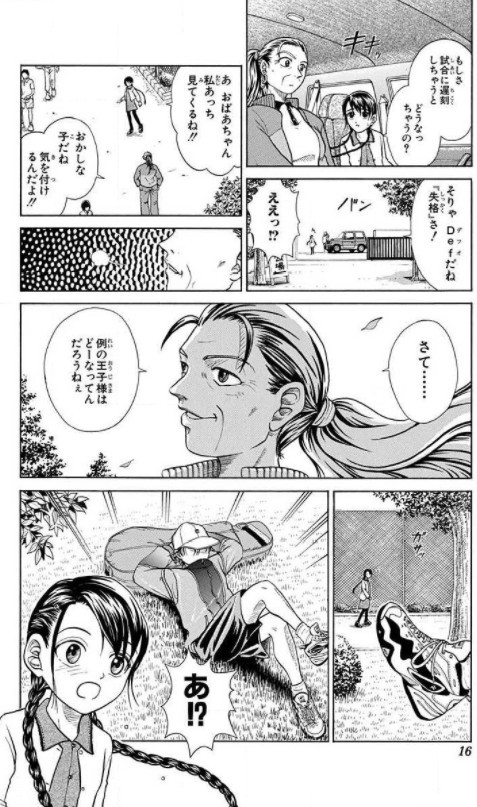 That was when Sasabe and his group also found Ryoma. Sasabe tried to scare Ryoma by fake-swinging at his face but Ryoma didn’t flinch. Ryoma then challenged Sasabe to a tennis match at the court outside. 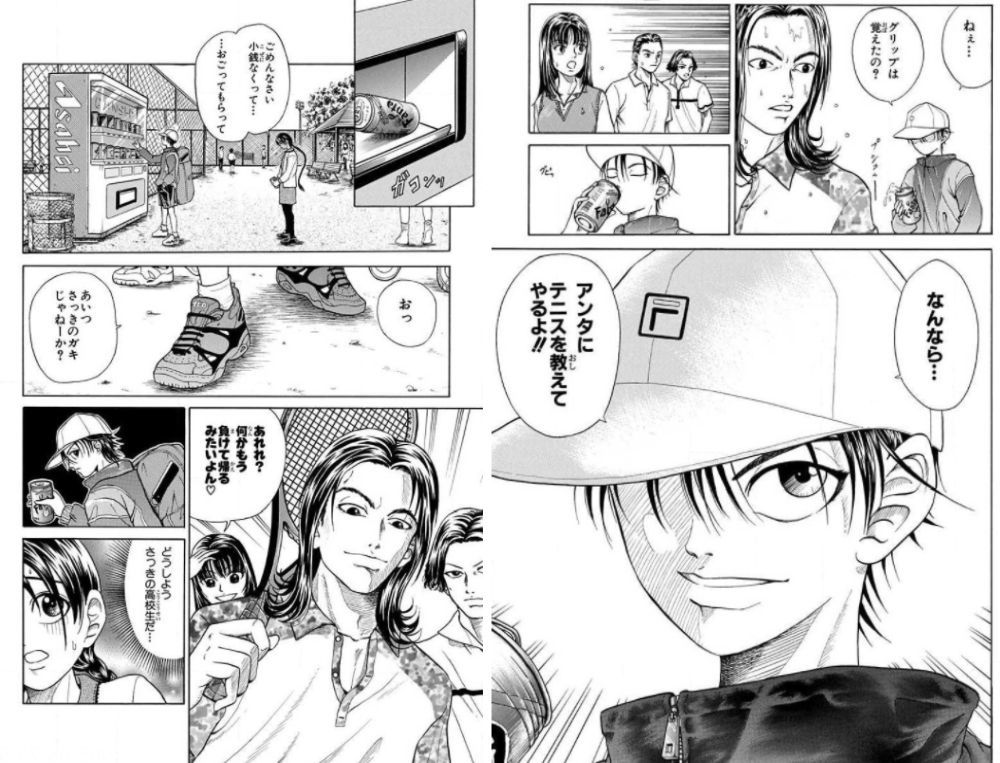 The first serve was Sasabe and he started off with a 180 km/h Bullet Serve. Seeing that Ryoma didn’t return, Sasabe felt confident.
However, Ryoma returned the next serve quite easily and approached the net to finish the point with a lightning fast ball. Ryoma won first point and kept his strong serve in the next round. 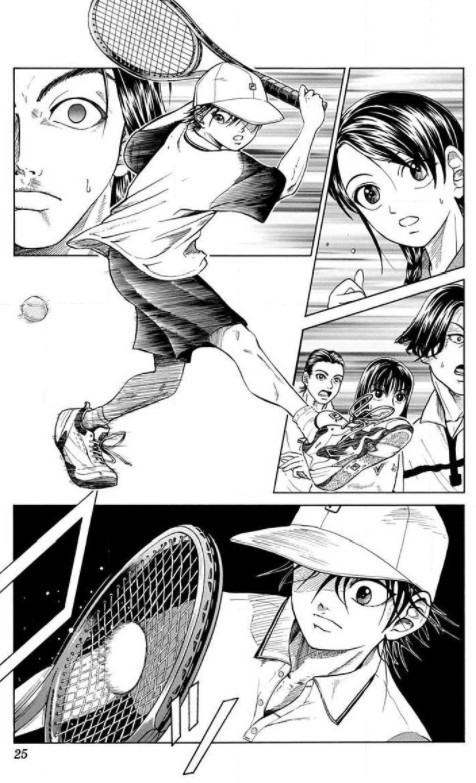 Right when Sasabe and his group started to realize that Ryoma was not a normal tennis player, Sakuno’s grandma appeared. She explained that Ryoma was in fact the son of her former student and had won the American Junior Championship four times consecutively. Their family name was unknown in Japan because they were staying in America and only came back to Japan every few years. 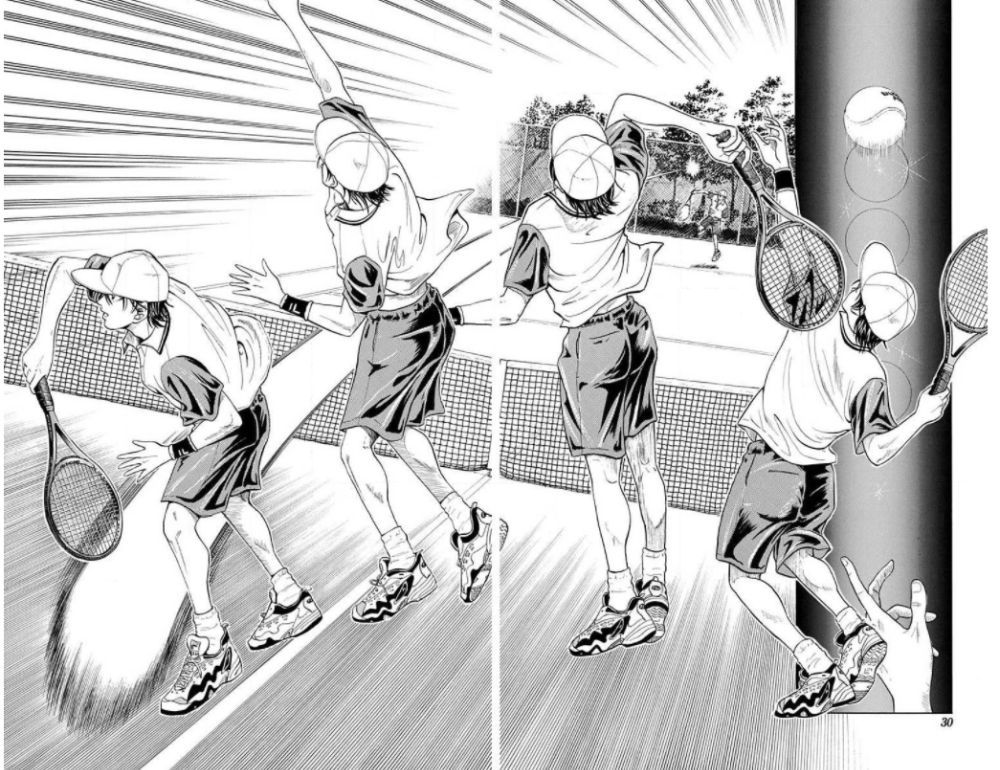 Sasabe's friends tried to encourage him to go up to the net for an advantage, but Ryoma's deep shots kept him at the baseline.
They tried to throw Ryoma off by calling all his balls out, which was legal since it was only a self-judged game. Ryoma counter-attacked by using a slice lob that allowed the ball to drop right in and not bouncing too much. 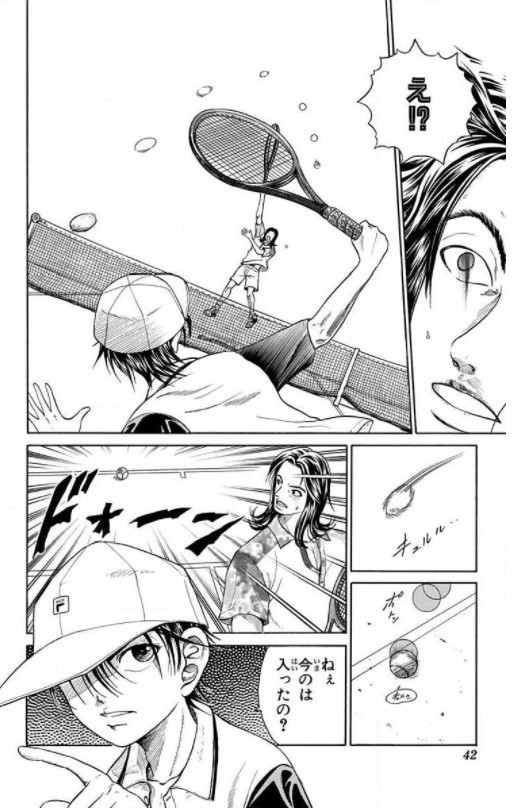 Sasabe got angry and played dirty by pretending to lose his grip and threw his racquet at Ryoma. Even that couldn’t throw Ryoma off his game, Ryoma simply said that Sasabe’s grip was weak and needed to work on it. 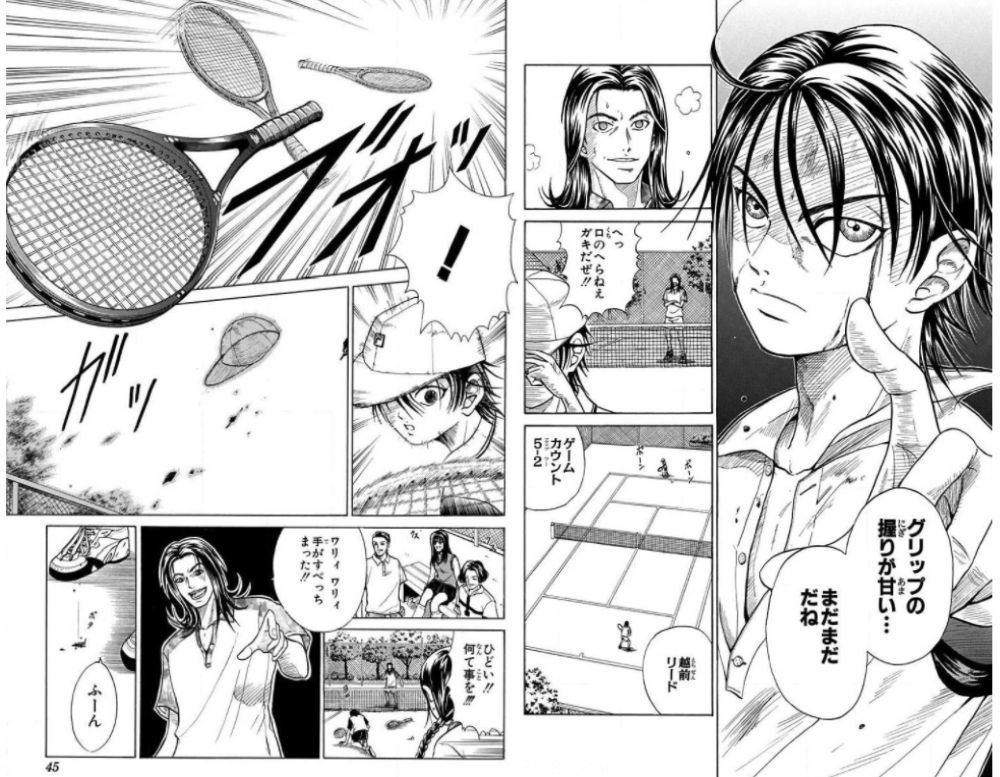 The score was then 5-2 and Ryoma was leading. Ryoma used the Twist Serve, a high-level technique that even adults had difficulties performing. His serves hit Sasabe twice and the third time, Sasabe was so afraid that he could only hold up his racquet to cover his face. It turned out that Ryoma only used a light serve this time. He won 6-2. 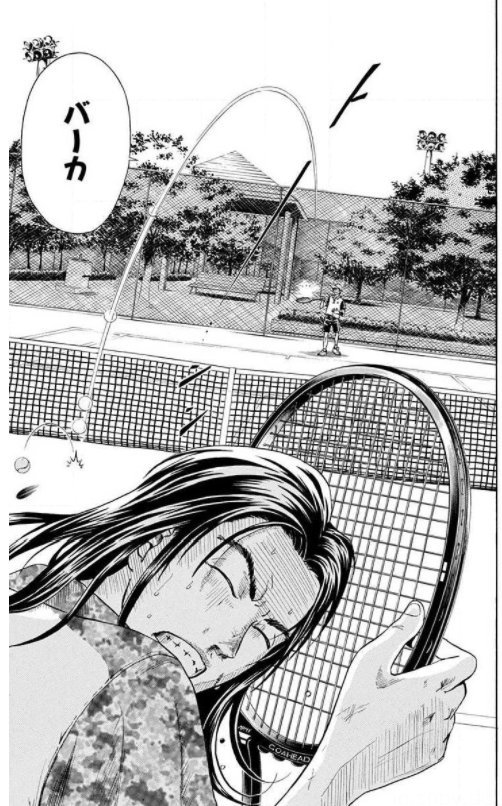 Sasabe was a sore loser and tried to challenge Ryoma to another match. Sakuno’s grandma told him that he would never win but Ryoma calmly accepted the challenge. It was finally revealed that Ryoma was actually left-handed but he used his right hand the entire match and still won easily. Ryoma was a “southpaw”, the term used to call the serving arm of a left-handed player. 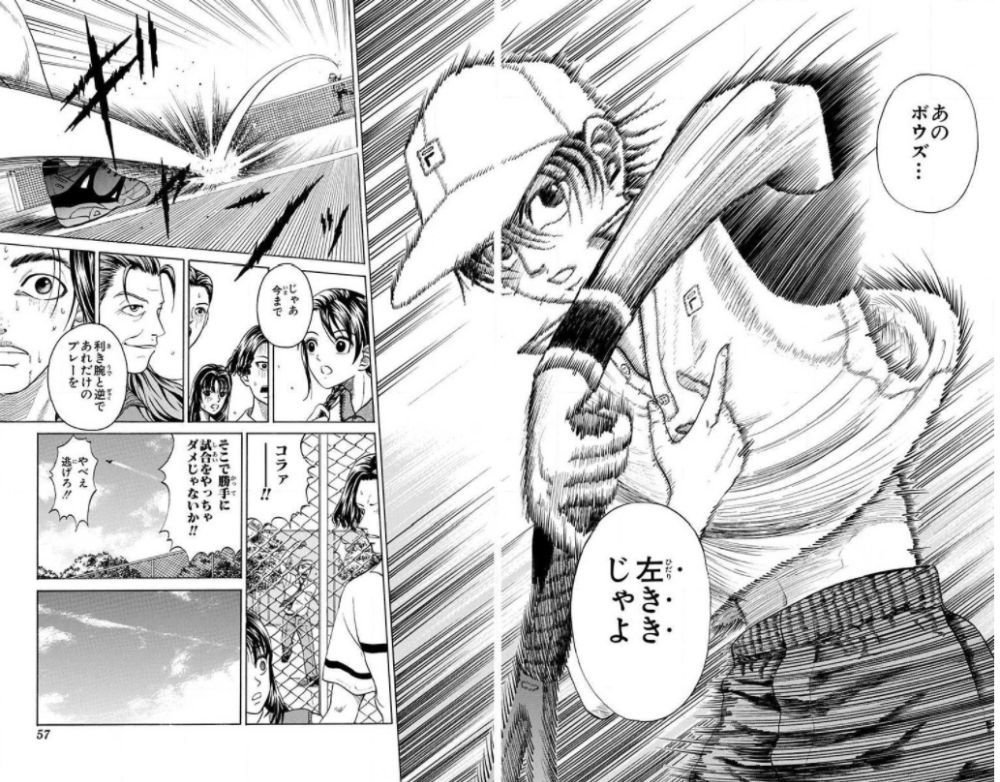 The game was abruptly interrupted by a club judge as they weren’t supposed to play without permission. Everyone ran and the match ended.
A few days later at Seishun Gakuen admission day, Sakuno was now a 1st year. She was talking to her friend about the rumor of a skilled tennis player joining their school and Sakuno herself also took up tennis. Meanwhile, Ryoma was taking a nap at a nearby tree and was also wearing Seishun Gakuen uniform. 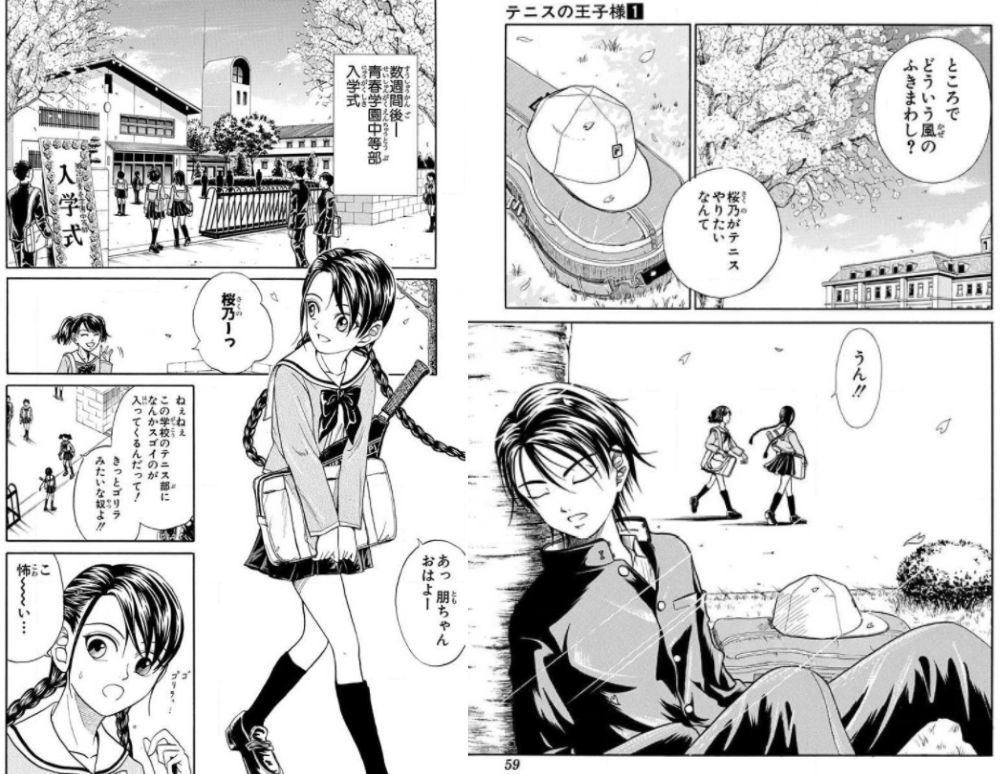