What is Cardcaptor Sakura about? 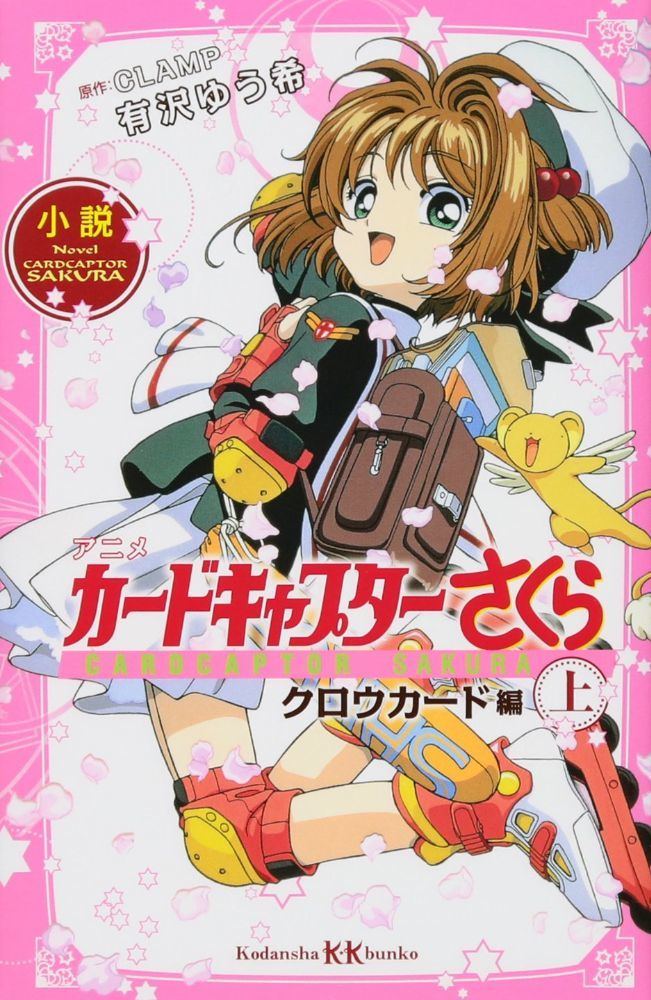 Cardcaptor Sakura was written and illustrated by the famous manga group CLAMP. The manga was serialized in the monthly shojo manga magazine Nakayoshi from May 1996 to June 2000, with a total of 12 volumes. Cardcaptor Sakura was critically praised for the artwork, humor and it provided a transcending experience for the targeted young readers.
The manga series and its anime adaptation have both won various prestige awards and were held as one of the go-to series for newcomers of Japan’s manga culture. Cardcaptor Sakura’s 70-episode anime series was aired across the world in Southeast Asia, Hong Kong, America, Australia, and New Zealand.
Due to its over-whelming popularity, the series has inspired many media adaptations. Amongst them were two anime films, video games, artbooks, picture books, and film comics. In 2016, the main story was continued by CLAMP in its sequel, titled Cardcaptor Sakura: Clear Card, focusing on the heroine and her friends in junior high school.
Trailer for the 2nd film “Cardcaptor Sakura Movie 2: The Sealed Card” released in July 15th, 2000 by Studio Madhouse
Cardcaptor Sakura
▸

The story of Cardcaptor Sakura began at night with a young girl, named Sakura Kinomoto, chasing after a mysterious creature that resembled a white rabbit. 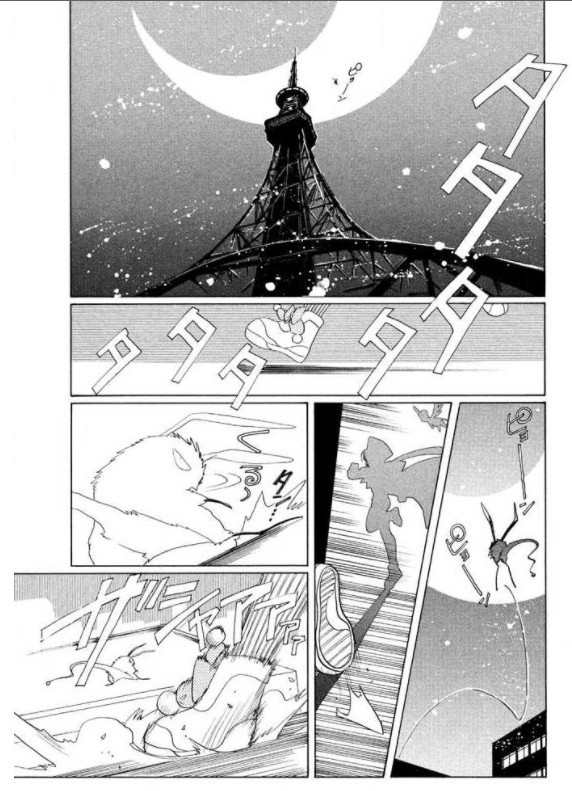 Sakura was accompanied by a small, yellow plush-like creature with little wings called Cerberus, or Kero as Sakura affectionately called it. 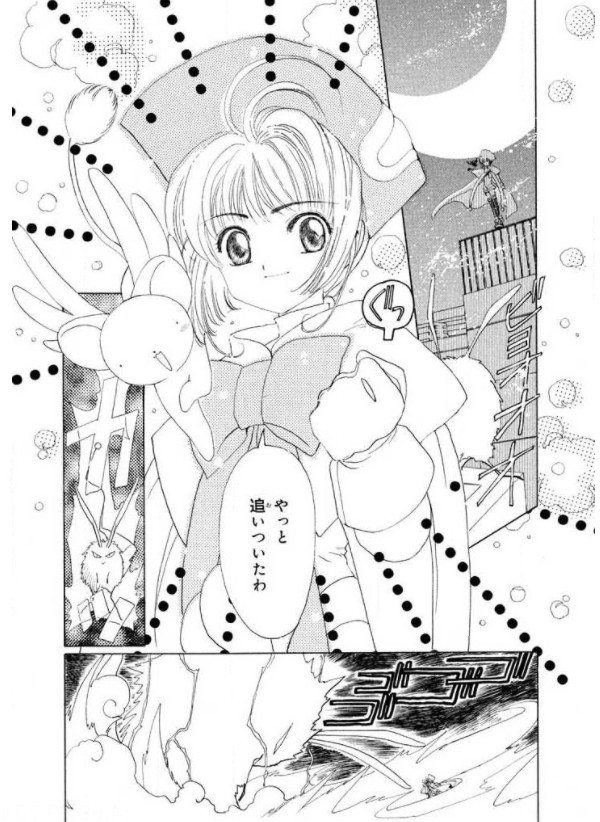 As Sakura cornered the rabbit and stared down at it from the Tokyo Tower, the rabbit quickly grew bigger and unleased its powerful attacks. Sakura revealed the true form of her Sealing Wand through a spell and pulled out a card called “The Windy”. She then used the power of the wind that was lent to her by the card and surrounded the giant rabbit with a tornado-like attack. The rabbit was subdued and finally return to its true form as a Clow Card called “The Jump”. 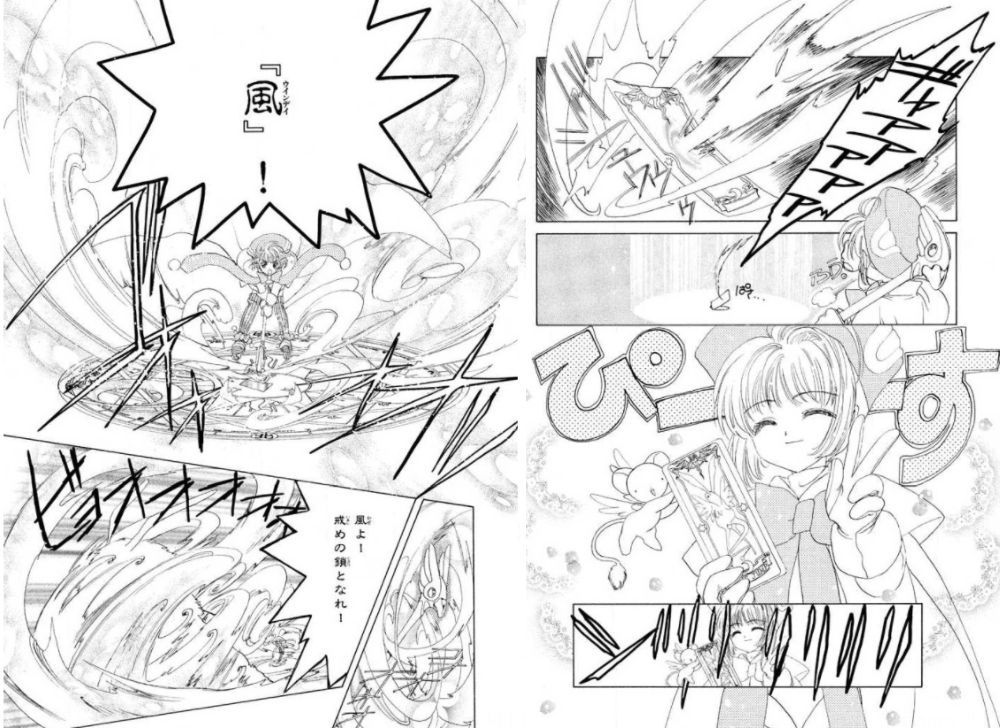 Sakura woke up the next morning as Kero was watching a video recording her battle with the rabbit from the night before. Sakura started to get dress for school. She was currently in 4th grade at Tomoeda Elementary and was revealed to be an energetic and athletic girl, even though academic wasn’t her strong suit.
Back to the recording video that Kero was watching, Sakura interrupted and took the tape out. She said she had to give it back to her friend – Tomoyo Daidouji, who would accompany Sakura on her nightly quest to subdue the cards and film her battle. 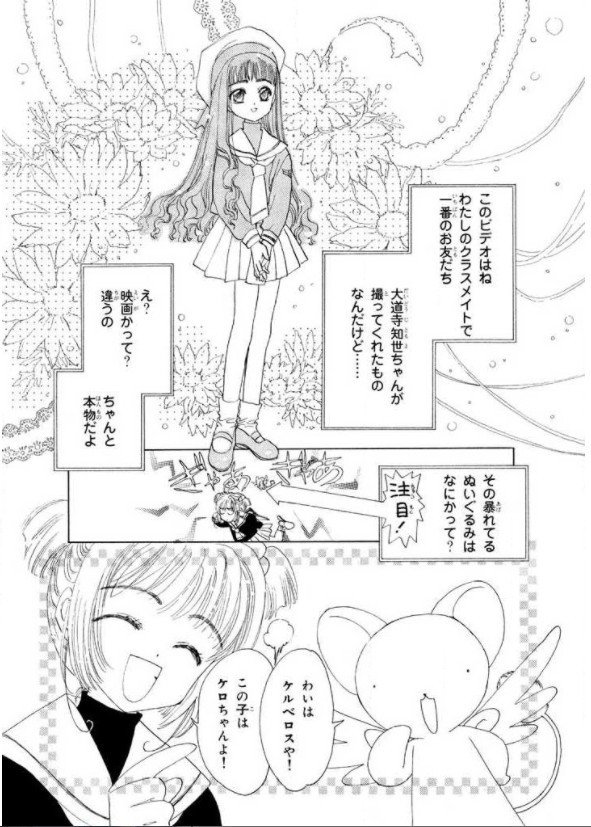 Sakura rushed downstair for breakfast and met her older brother Touya Kinomoto, a high school sophomore at Seijou High. Her elementary school was right next to her brother’s school. Touya would constantly tease Sakura and she swore to one day grow as tall as a telephone pole and “squish him”.
Then, Sakura and Touya’s father stepped inside the room with breakfast in hands. Their father Fujitaka Kinomoto was a kind and affectionate person. The last family member of the Kinomoto was their mother, Nadeshiko Kinomoto, who passed away when Sakura was only 3 years old. 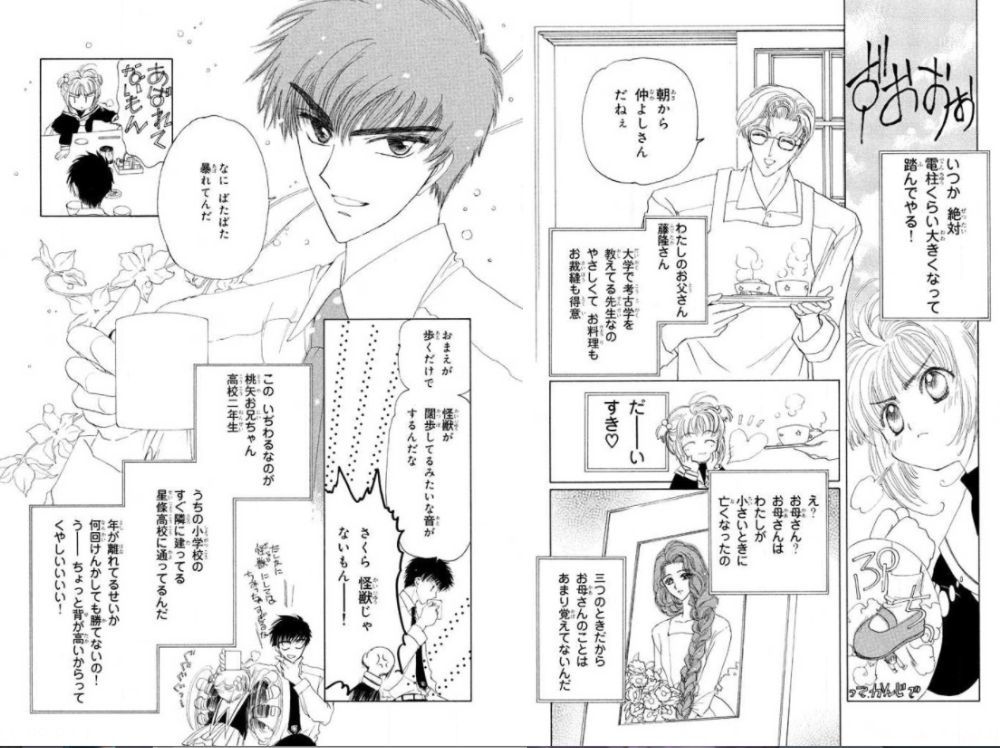 Sakura quickly finished her breakfast and put on her roller skate shoes. She rushed off in order to catch up with her crush and also her brother’s best friend Yukito Tsukishiro. He would always ride to school on the bike with Touya and Sakura has always liked him. 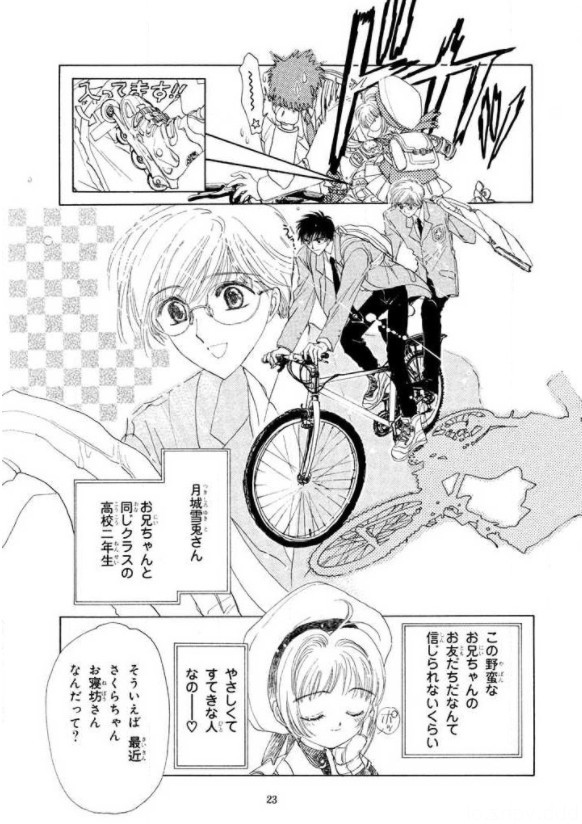 After Yukito and Touya went off to school, Tomoyo caught Sakura looking at them in a daze. As Sakura returned the tape that Tomoyo filmed her, Tomoyo launched into a passionate speech about Sakura’s brave battle. She said that Sakura was collecting the Clow Cards to prevent the word from disaster and that Sakura was the bravest girl in the world.
Sakura recalled back when she became a 4th grader only two months ago. She found an old book in her father’s library, title “The Clow”, and she opened the book in curiosity. From the illustration of a magnificent lion with white wings on the cover of the book, Kero appeared.
It turned out that Kero’s current form was not his true form. His true form was that of the cover – the guardian of the book, the beast of the seal. And outside the book, he didn’t have enough power to keep his original form. 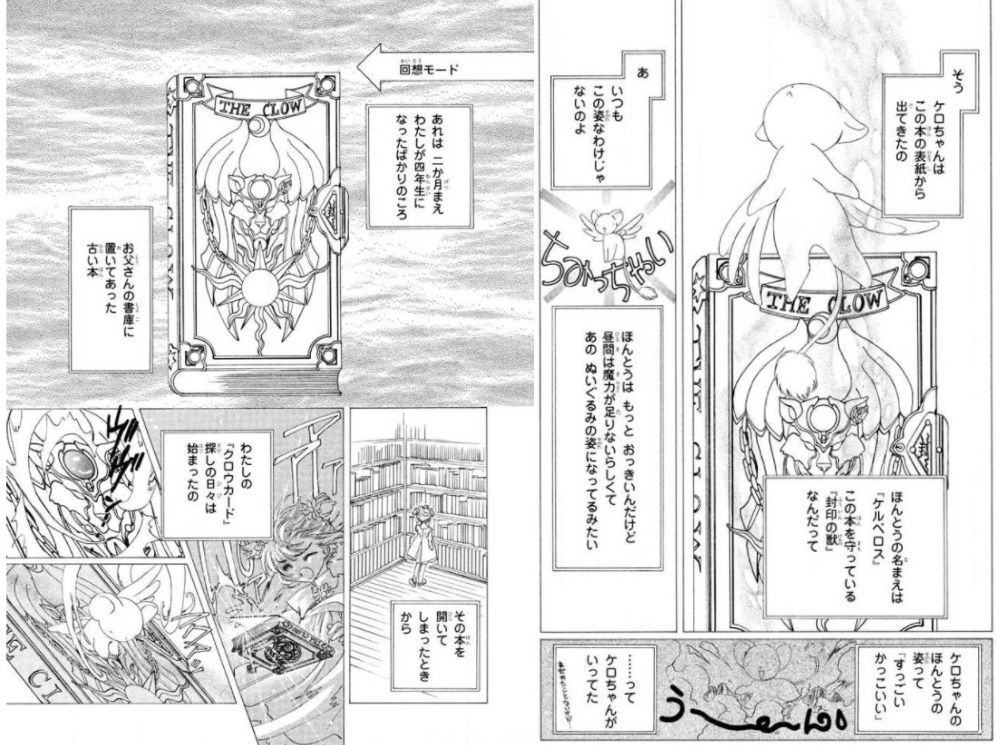 All the Clow Cards inside the book that Kero was supposed to be guarding have escaped by Sakura opening the book. Kero told Sakura that the cards were created by a very powerful magician named Clow Reed and each card was alive. The cards have their own unique names and magical powers that were powerful enough to threaten the peace of the world. That was why Clow sealed the cards inside this book and entrusted Kero to guard the book’s seal. 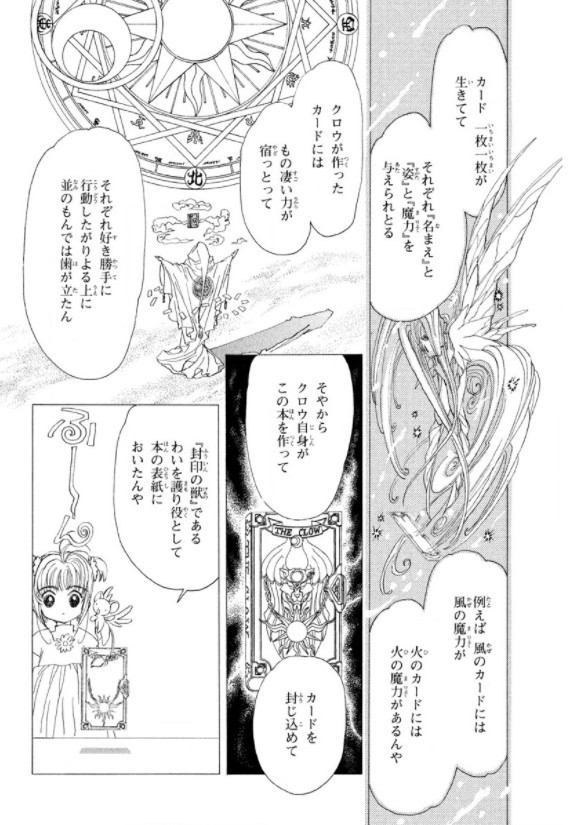 However, it would need magical power for one to be able to open that book. Kero told Sakura that there must have been magical power in her and then chose her to be the wielder of the book’s key – the Sealing Wand. A cardcaptor was born and that was how Sakura began her journey to catch the escaped Clow Cards, with Kero as her companion. Presently, she only had three cards. 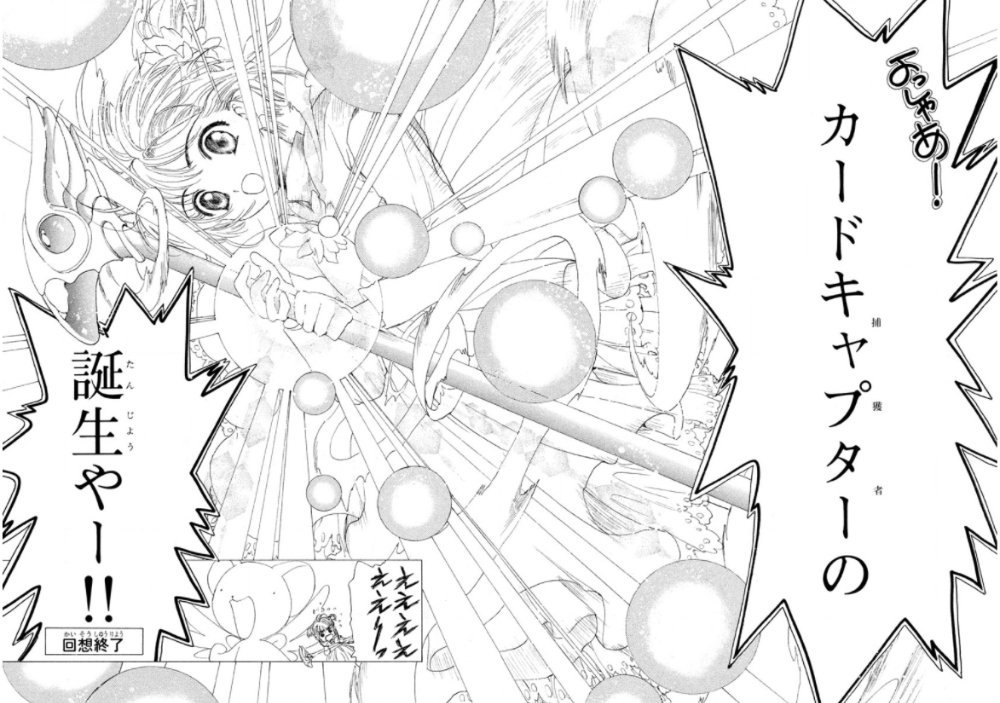 Tomoyo was the only one beside Kero to know about Sakura’s adventures and decided to film her battles as well as providing all the clothes that Sakura would wear into battle.
Later in gym class, everything was normal. Sakura was great and everyone admired her athletic skills. From the soccer field of the neighboring Seijou High, Touya also attracted a huge crowd cheering for him.
That was when a sudden gush of wind occurred and Sakura saw a faint shadow of a giant bird across the sky. Sakura instantly knew that a bird that big could only be a Clow Card and she resolved to catch it next. 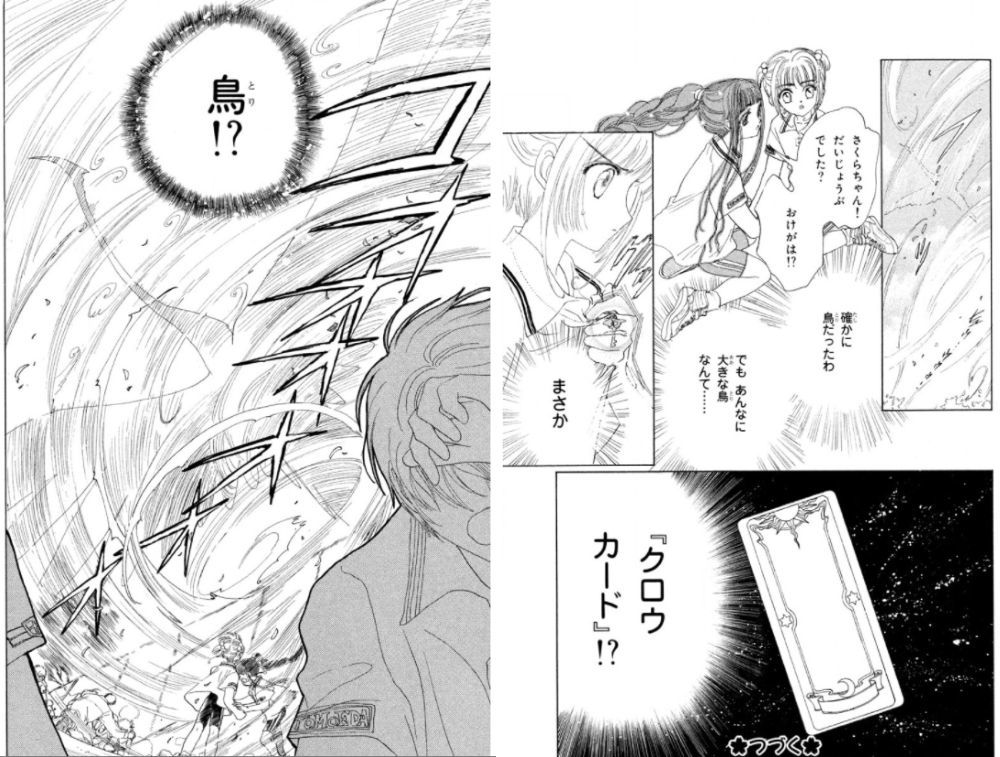