The story of Ueki no Hosoku 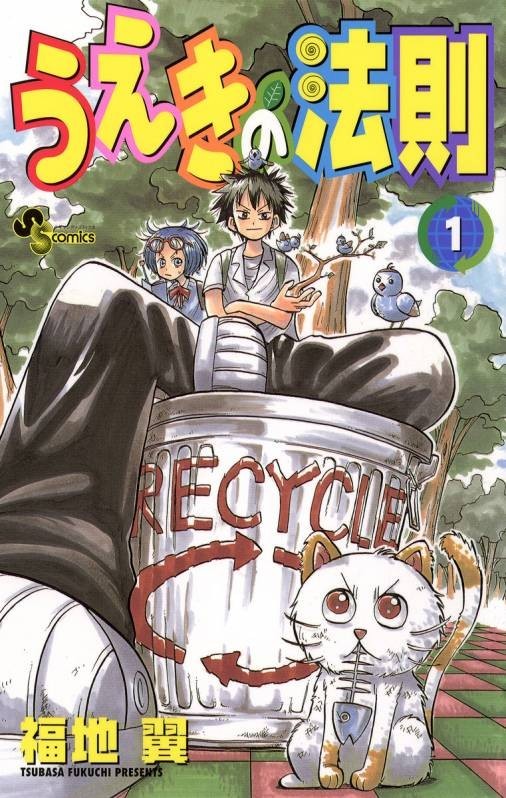 Ueki no Hosoku (The Law of Ueki) is a manga series written and illustrated by Tsubasa Fukuchi. It was serialized in Weekly Shonen Sunday by Shogakukan from August 2001 to October 2004, with a total of 16 volumes.
The Law of Ueki is highly praised for its clean art style, comedic tone and simple yet satisfying action scenes. Following its success, a sequel titled The Law of Ueki Plus, was serialized in Weekly Shonen Sunday from April 2005 to June 2007. The series ran for a total of 5 volumes.
A 51-episode anime TV series produced by Studio Deen was broadcasted on TV Tokyo from April 2005 to March 2006. Not only that, The Law of Ueki was also adapted into video games for PlayStation 2 and Game Boy Advance, which were exclusively released in Japan. The games were based on the story of anime adaptations, titled Ueki no Hosoku: Taosu ze Roberuto Judan!! (PlayStation 2) and Ueki no Hosoku: Jingi Sakuretsu! Noryokusha Battle (Game Boy Advance).
The Law of Ueki (Ueki no Housoku)
▸

Ueki, are you an alien!?

The story of The Law of Ueki started at Hinokuni Junior High School. Mori Ai was staring intently at her classmate Kosuke Ueki and already set her mind on revealing Ueki’s “true self”.
The reason for this was that one day in class, Mori and Ueki were the only students left behind during an exam. She accidently saw Ueki turning the bits of eraser on his desk into a small tree. The tree sprouted up from his palm with little to no effort. After discovering Ueki’s power, she came to a rather peculiar conclusion that Ueki was an alien and his purpose was to conquer Earth. 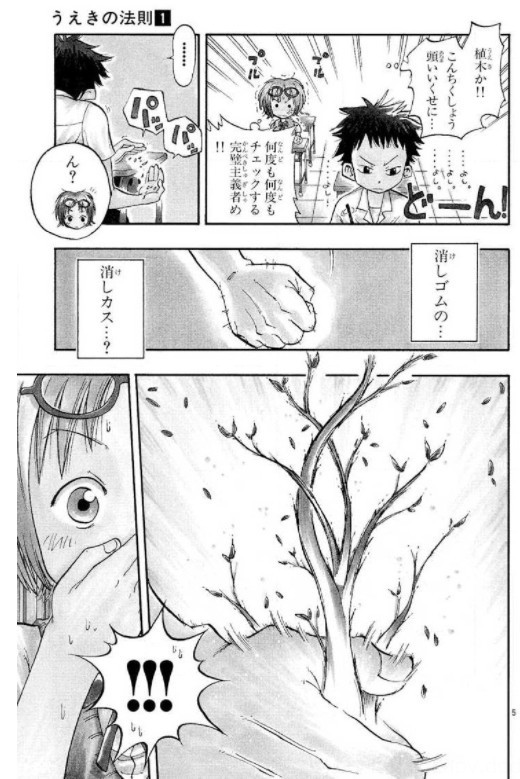 Mori followed Ueki on his way home from school to investigate further. That was when one of the school teachers – Mr. Kobayashi, saw Mori following Ueki and decided to join her. He wanted to find out what a normal student’s life was like after school.
On his way home, Ueki got confessed to twice by the girls at school. Witnessing this, Mori was surprised to learn that Ueki was in fact very popular. However, Mori also learned that Ueki was a real air-head as he carelessly crossed the street during red light and even got hit by a kid on tricycle. He also got slow reflex and couldn’t dodge a pot of plant falling from the balcony above. 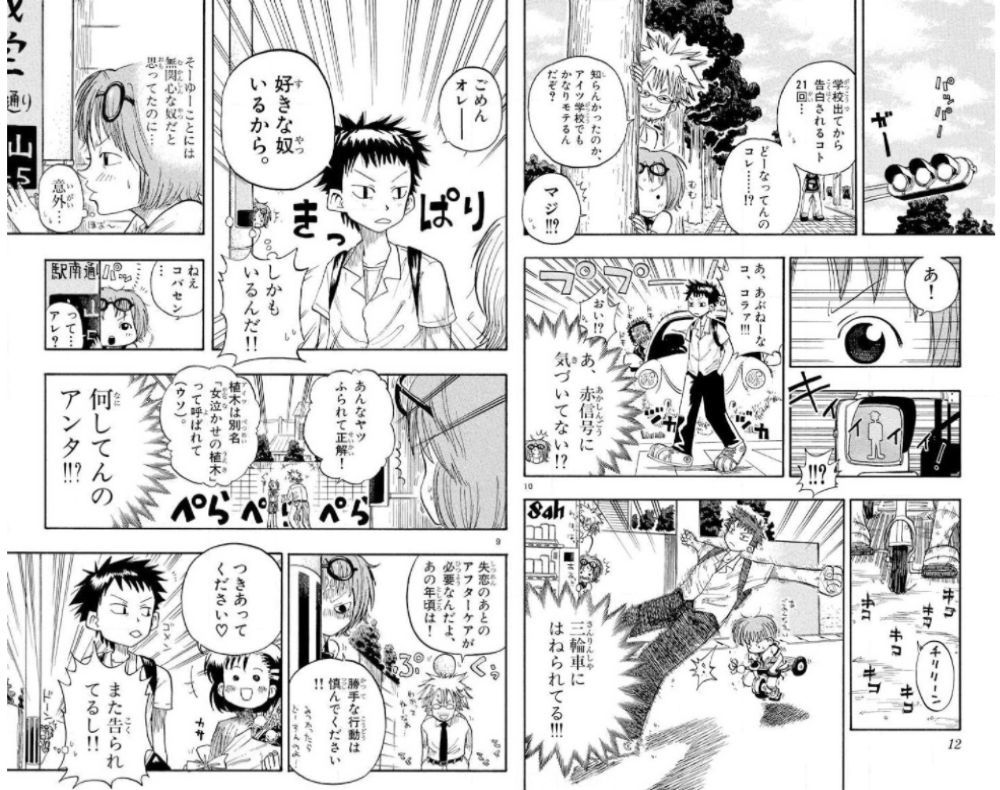 Just when Mori’s opinion of Ueki couldn’t get any lower, he was surrounded by a bunch of thugs when passing through a dark tunnel. They threaten Ueki for money but he calmly dialed the police, his expression unchanged. 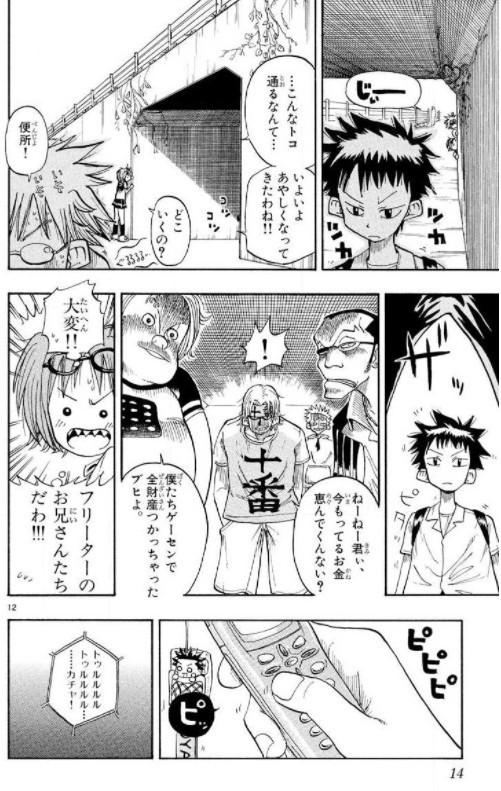 The thugs turned to ran and saw Mori so they tried to threaten her instead. Suddenly, one of the thugs was sent flying back. It was Mr. Kobayashi! Mori didn’t know that Mr. Kobayashi was so strong and before she could question any further, he urged her to go after Ueki. 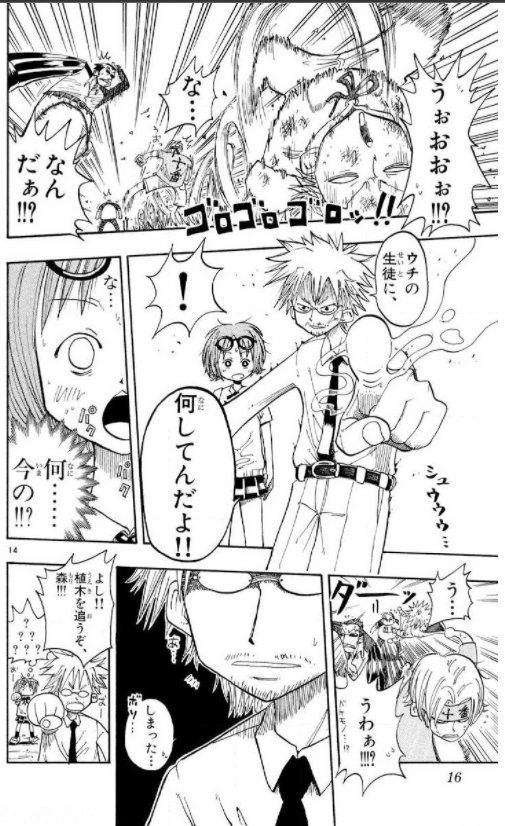 Following Ueki to the park, Mori saw Ueki picked up some cigarette butts on the ground and turned them into tree. 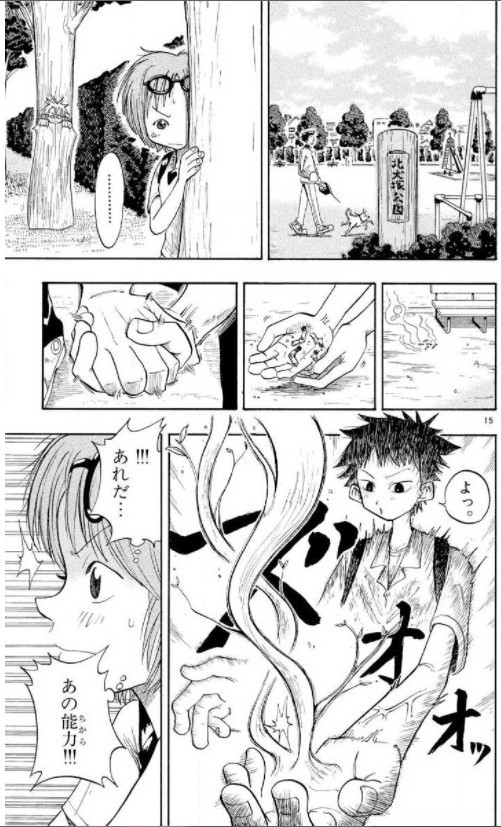 Mr. Kobayashi said that despite his weird power, Ueki was only helping nature returning to its original state. He turned to leave and Mori continued to watch Ueki squashing a soda can in his palm before turning it into another tree. Mori realized that Ueki had to enclose an object in his hand before being able to turn it into a tree. 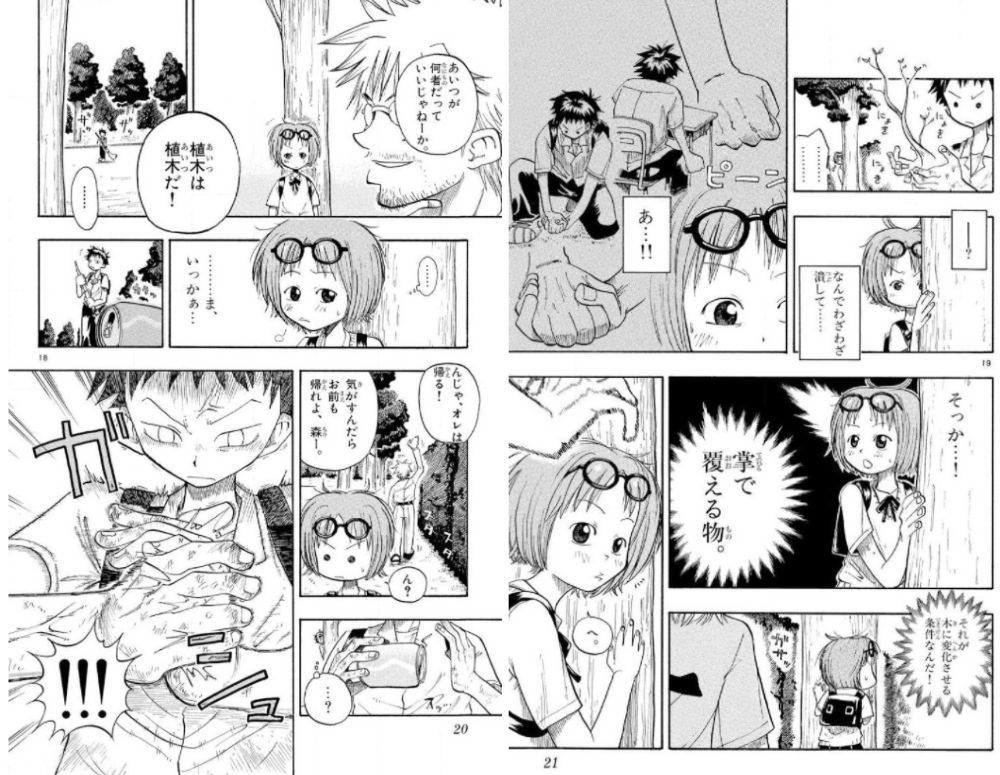 The thugs from earlier suddenly reappeared and they caught Mori before she could run. One of the thugs jumped up and hit Ueki on the head with a bat. Ueki then used the broom he has been sweeping the park with to fight back. With powerful swings, he was able to beat them on the ground. 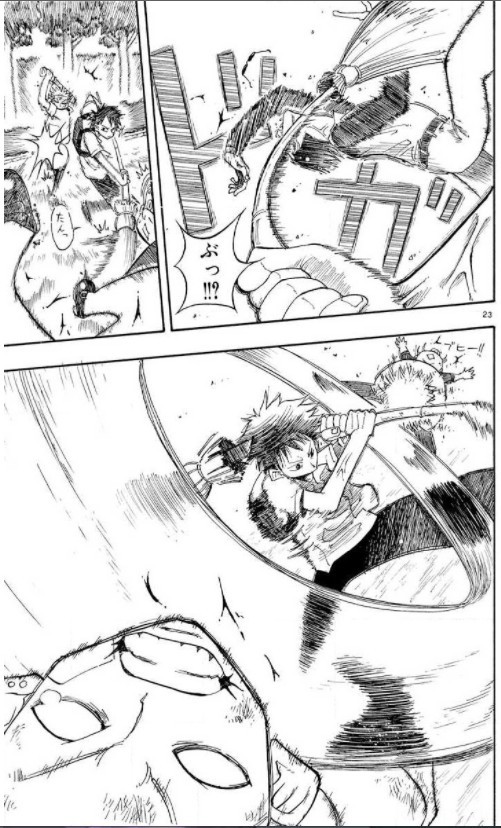 One of the thugs got Mori and was threatening to injure her with a knife. Ueki broke his broom into two and enclosed a small part in his hand. From there, a tree sprouted out and hit the thug straight in his face. He was knocked out instantly and Mori was saved. 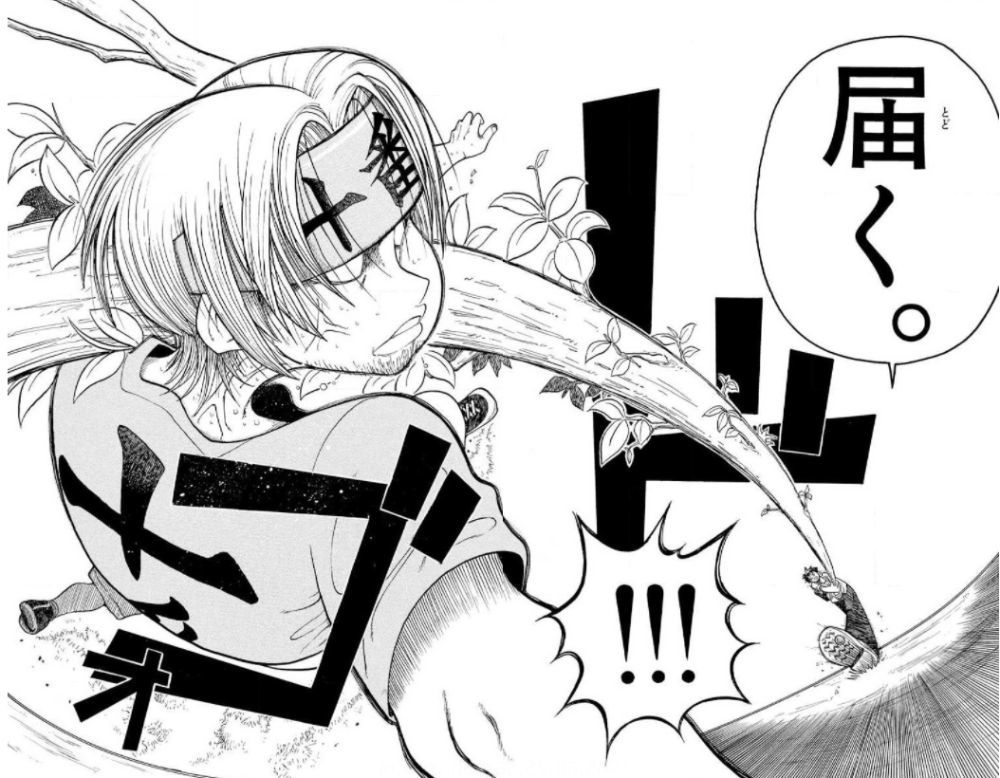 That was when Mori and Ueki heard Mr. Kobayashi’s voice. He was watching the whole thing from a nearby tree and warned Ueki about the consequences of using his power against a normal human. Mr. Kobayashi then revealed that he was the one giving Ueki his power – “the ability to turn trash items into trees”. 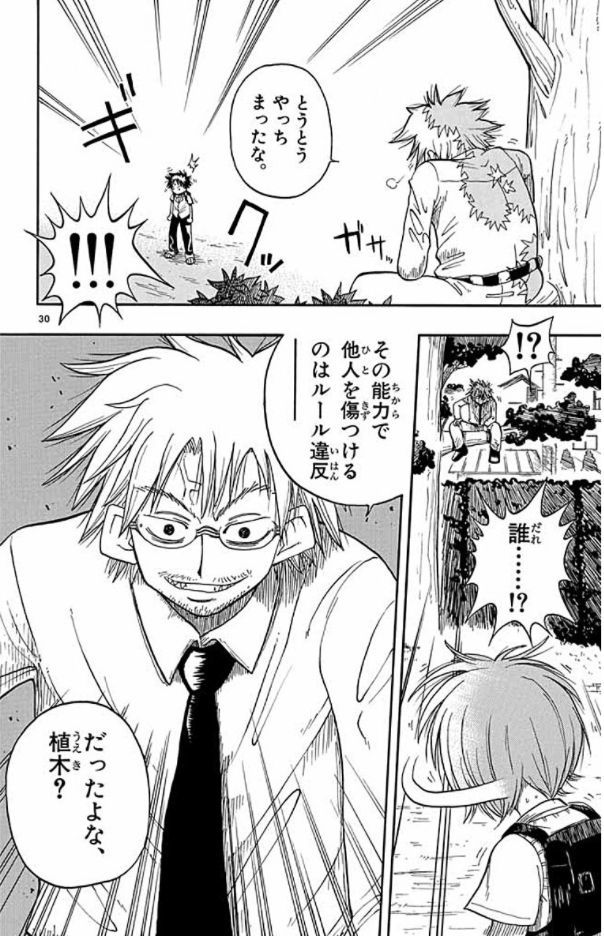 The next morning, Mori saw Ueki on the way to school and greeted him. Ueki told her that his power hasn’t been taken away. It turned out that the consequence which Mr. Kobayashi mentioned was the loss of one of his abilities called “Zai”. In the universe of The Law of Ueki, Zai referred to many abilities like swimming fast, dancing well and so on. This time, Ueki’s “Zai of attraction” was gone and he was shunned by people passing through. 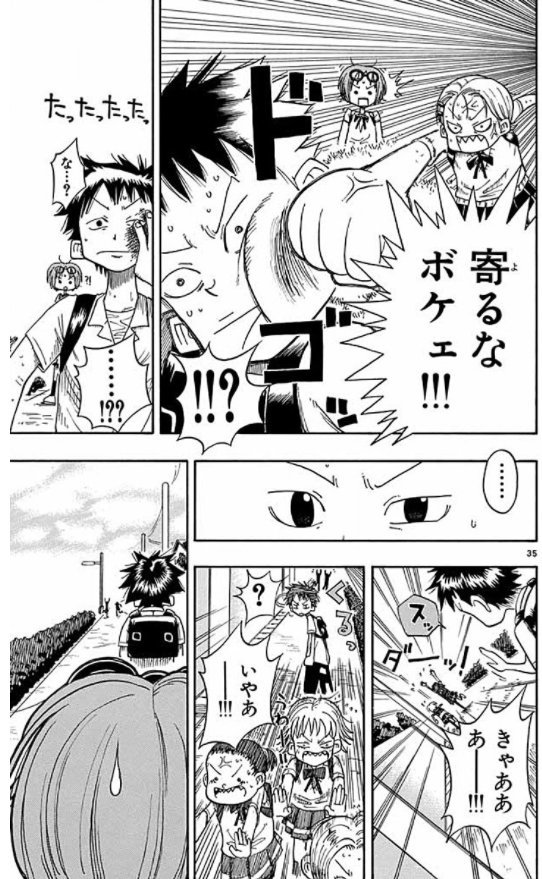 While Mr. Kobayashi was observing Ueki and Mori from afar, his phone suddenly rang. The other end was someone called Inumaru and he called to remind Mr. Kobayashi to be more serious. “You are part of the 100 God candidates”, Inumaru on the other end said.
He proceeded to remind Mr. Kobayashi of the current transition period between the new God taking command and the old God. While choosing the next God, 100 candidates would partake in a tournament. Each would choose one junior high school students, grant them a power and let them fight each other. The candidate that chose the winning student shall become the next God and the winning student shall receive a “blank Zai”, or in other word – whatever power that they wish for. 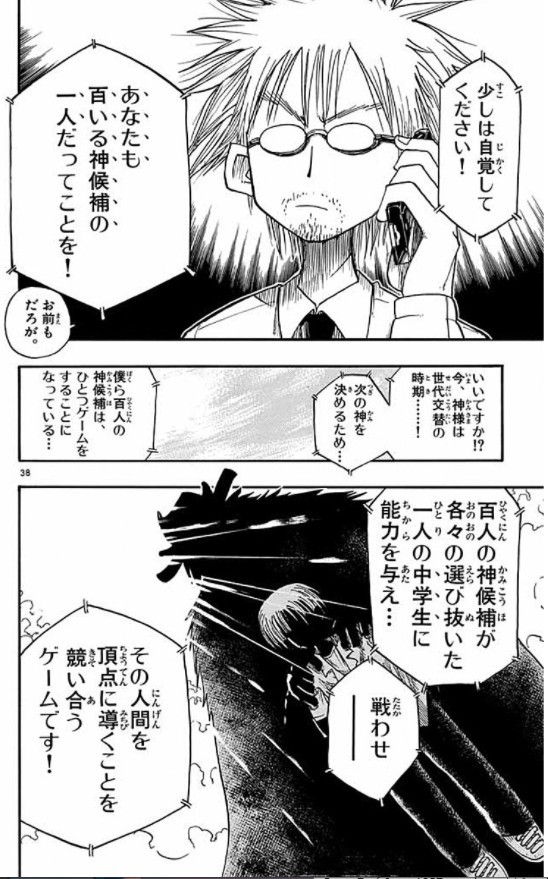 Irritated by Inumaru’s constant nagging, Mr. Kobayashi threw the phone away.
Mr. Kobayashi then thought to himself that he has chosen a worthy recipient of his power. Ueki was very righteous and willing to throw away his abilities for the sake of others. “Only people with this sense of justice is suitable to obtain the blank Zai!”, Mr. Kobayashi thought.
And right now, the Zai that Ueki has remaining was only 10! 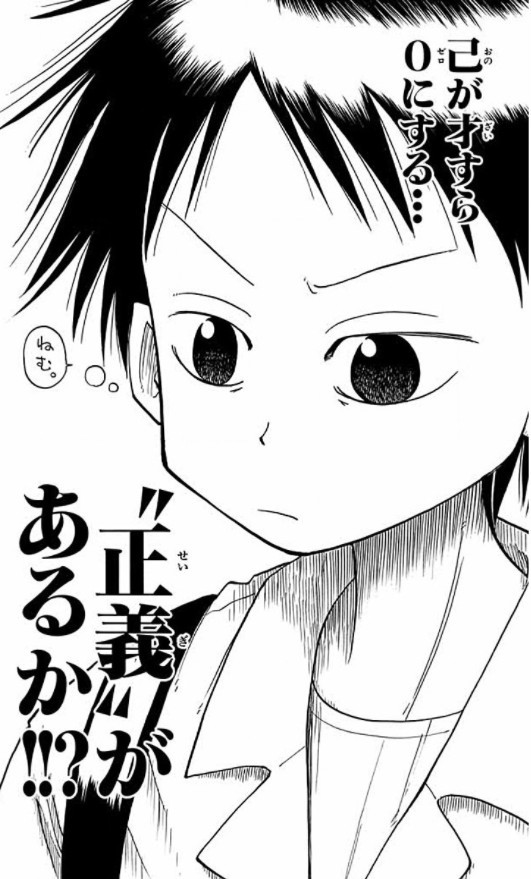