Hello everybody! It’s Hana from Manga Republic!
We have reached the first half of 2020 but how have you been? Are you enjoying your Otaku life?

Now! It’s time for a Manga (“Paper”-version) Sharing Series! The title I’m featuring today is THIS! 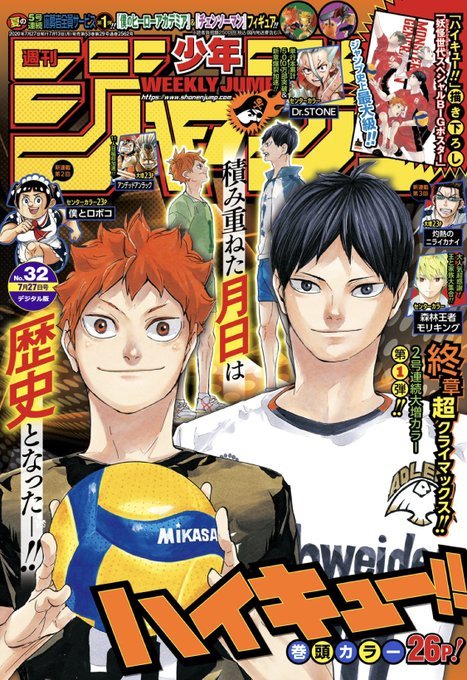 It’s one of the HOT topics now, which came to an end the other day. It’s ‘Haikyu!!’
Actually, I featured ‘Haikyu!!’ in the first article of this series but at that time, I focused more on some popular scenes of Karasuno High School’s volleyball club, which the main protagonist, Hinata Shouyou, belongs to.
【Haikyu!!】We Are in the Digital Society! That’s Why We Want You to Read the “Paper”-Version Manga! 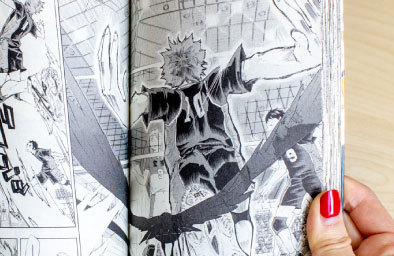 We all know Hinata or other members of Karasuno High School volleyball club are so attractive but……
In this title, ‘Haikyu!!’, other characters in the competitive schools are super cute too!!!!
So! For this article, I’d like to review some popular scenes, where such characters appear! 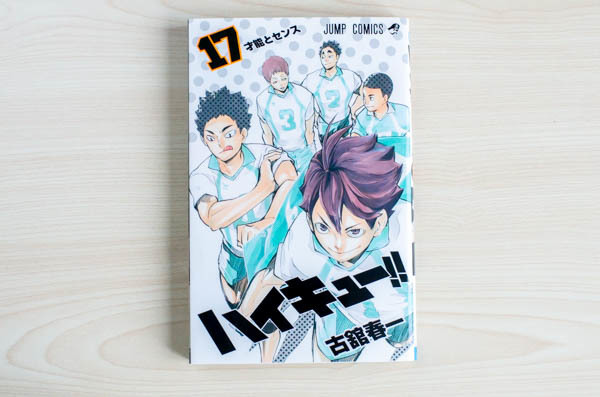 The first characters I want to share are the ones who appeared as the first rival team of Karasuno High School!
It’s a famous scene, where they (Aoba Jousai) and Karasuno High School competed for the final set in the Pre-Spring Interhigh Miyagi Prefectural! 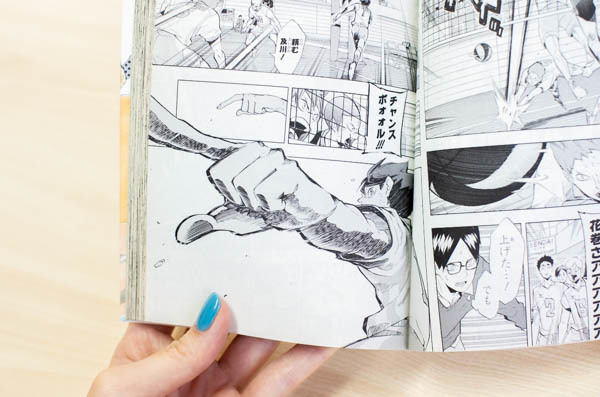 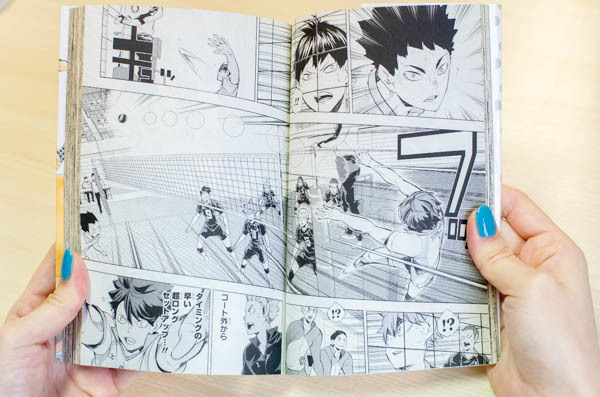 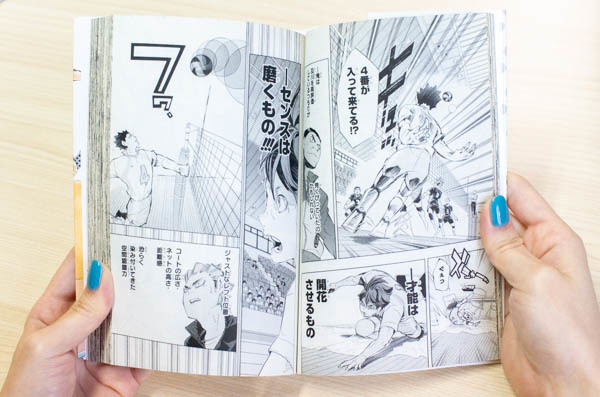 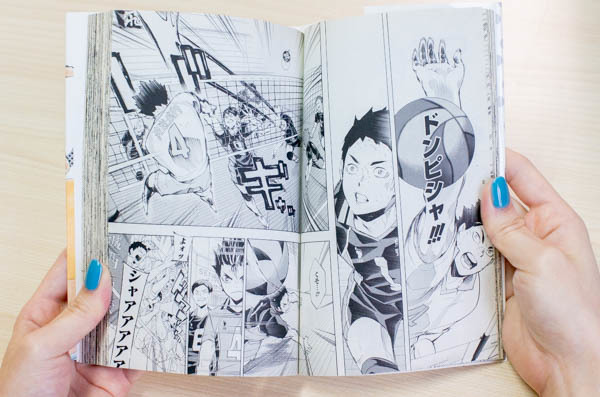 Aoba Jousai has reached match point first but then Karasuno took it back, ended up reaching deuce.
If Karasuno gets one point, they will win the game, when Azumane hits the intense spike! Hanamaki from Aoba Jousai saves by the bell by bumping the spike but the ball goes outside of the court.
When everybody follows the disturbed ball, Oikawa, who first heads for the ball, gives a signal to Iwaizumi, who is waiting for the ball at the opposite side. Getting the signal, Iwaizumi starts to move. Then Oikawa beautifully makes a super long set from outside of the court to Iwaizumi.
However, Iwaizumi’s spike is received by Karasuno, and Aoba Jousai ends up losing the game there. For the 3rd graders of Aoba Jousai High School, including Oikawa and Iwaizumi, it has become the last moment as the members of high school volleyball club.

The most impressive part about this episode is that Oikawa, who thought he was inferior to Kageyama when it comes to talent or sense, started running towards the court, regaining his footing, after the setup, talking himself ‘I can have my talent bloom and I can cultivate a sense!’
And of course, his perfect set to Iwaizumi is another impressive part as well, I guess. Especially because both Oikawa and Iwaizumi have shared everything they have felt from volleyball such as suffering and pleasure together……! 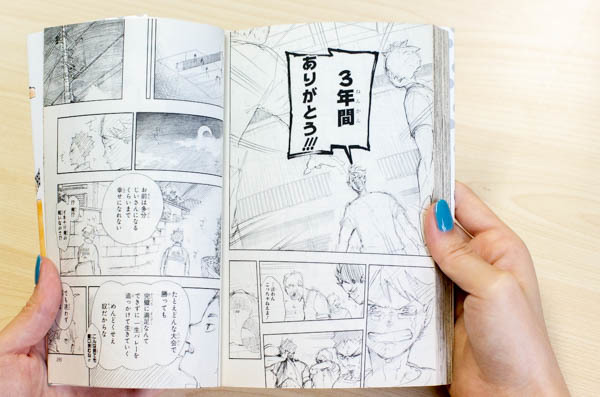 At the end of the Vol.17 (where this episode depicts), a newly drawn manga depicting Aoba Jousai’s members after this game, is contained too, as you can see in the picture above. In the last scene of that manga, Iwaizumi says to Oikawa, ‘You’re my proud partner and a super awesome setter.’
This will makes us know more about Oikawa and Iwaizumi’s relationship and if you read episode 146 again after this manga, I bet you will feel even more profound about the last setup from Oikawa to Iwaizumi.

So…… For those who like or are interested in Aoba Jousai High School volleyball club, try this episode 146 in Vol.17 of ‘Haikyu!!’! 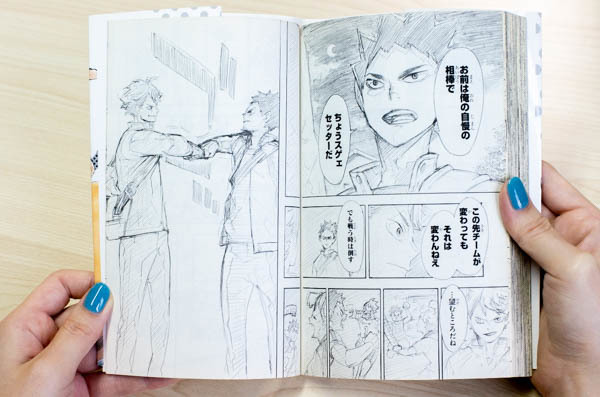 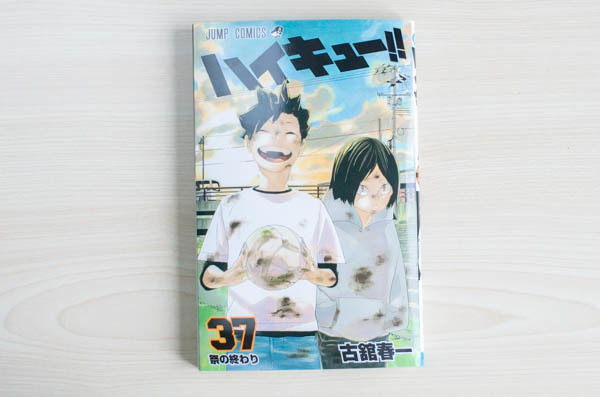 The next one I’ll share is the famous scene of Nekoma High School!
Their hearts’ desire, ‘Dumpster Battle’ came true! It’s the third round of the Spring Interhigh Tournament! It’s the final set competed by Nekoma VS Karasuno! 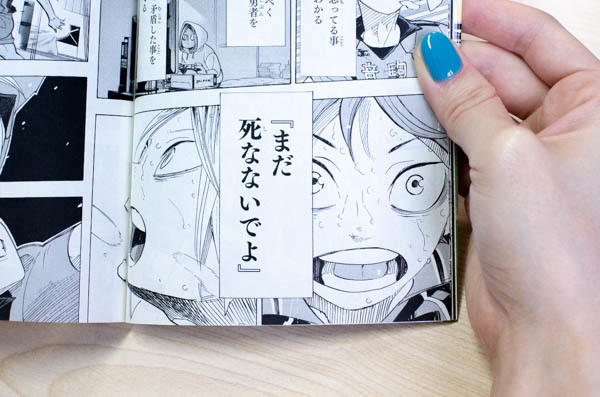 This scene, as well, is in the final (the third) set. The episode begins with Karasuno’s match point, meaning it’s the very last rally. While both teams are setting a tremendous attacks, the ball never falls down.
Meanwhile, Kozume Kemma, who blocks against Tanaka (Karasuno)’s spike, is pushed away by Haiba, who is also blocking next to him.
Haiba instantly looks at Kozumi and Kozumi strongly appealed to him.
Haiba is surprised at Kozume’s unexpected attitude because it isn’t Kozume that he knows. And Kuroo is a childhood friend of Kozume and Kozume has started playing volleyball because of Kuroo.
When they first appeared, Hinata asked Kozume ‘Do you like volleyball?’ and he replied ‘I don’t dislike it. I’m doing it because I feel like doing it. But I don’t like being tired from it, though.’ Kozume actually feels tough and “tired” but he also doesn’t want that moment to be over yet. Thinking that, he chases the ball towards the court. 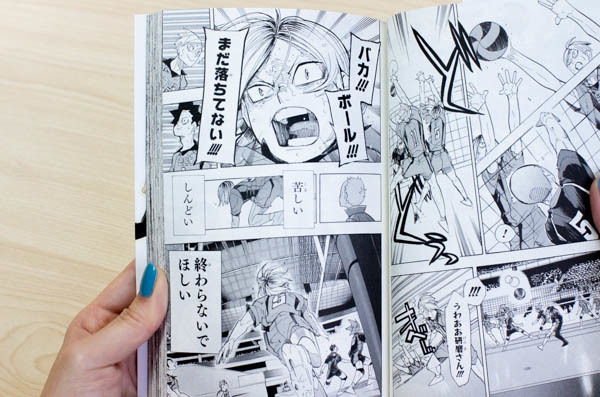 The ongoing rallies in the game are as if they have “another” chance, which they have experienced so many times since they played the practice match for the first time.
However, this match is actually the final one, which has “no chance”. After the three sets, they will get settled.
The moment has come during the rally, when Kozume drops the ball from the sweat on his hands.
And the moment when the game is over, what Kozume says is “Yeah~~~~~ it was fun!” and also appreciates Kuroo’s words that have made him want to play volleyball. 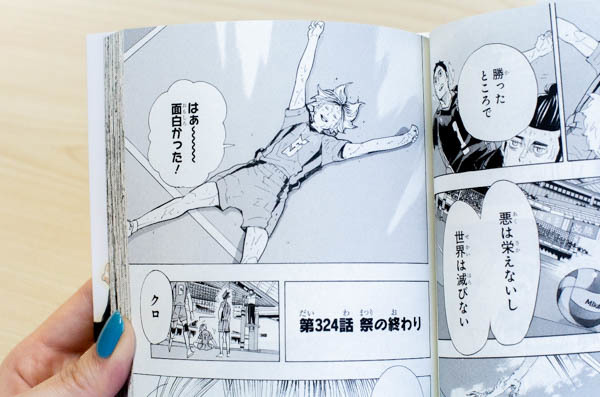 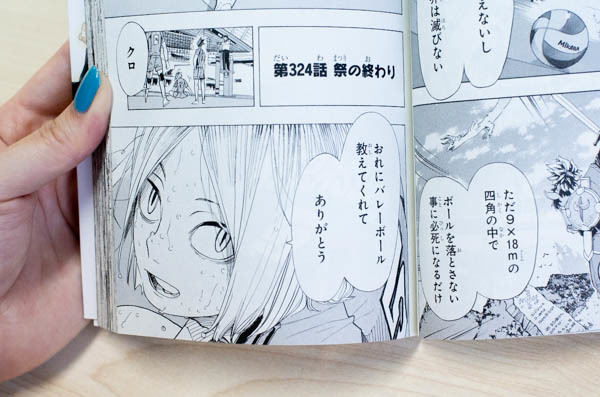 Kozume had had kind of a laid back personality when it comes to volleyball, not liking it much, until this match.
That had been him! But then, this scene showed us another Kozume, who was desperate chasing the ball and said “it was fun!” from the bottom of his heart, smiling and laying down with his arms and legs spread out on the court after the match. This scene tells us that Kozume was very into volleyball before even he noticed. To me, this is the most favorite scene among all the episodes in ‘Haikyu!!’……!

By the way, I’ve heard that the ball falls down from the sweaty hands quite often when they play volleyball.
So, ‘it’s not something that happens in manga but it actually happens when we play volleyball too’. And it did happen during the Dumpster Battle too, which is one of the attractions of ‘Haikyu!!’, I guess!

Of course, Manga Republic carries vol. 37, which has this episode too! Go visit there if you are interested in! 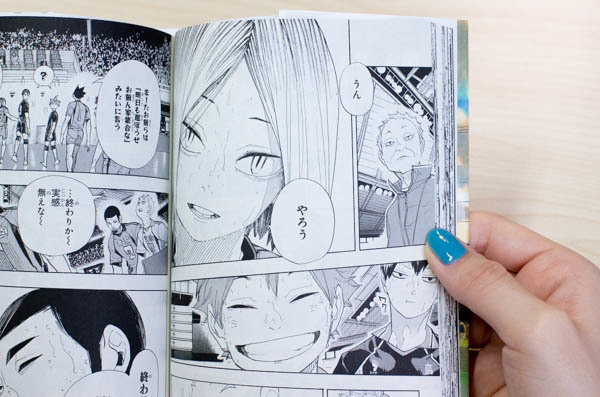 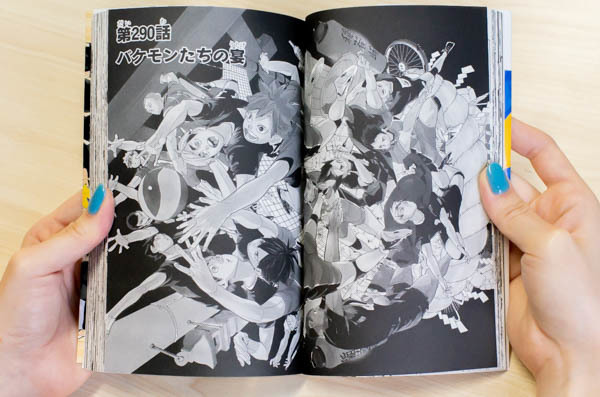 The last scene I’ll share with you is a match against Inarizaki High School volleyball club, which is also scheduled to air in October!
※ This contains some spoilers of anime so be careful if you don’t know what will happen from here! 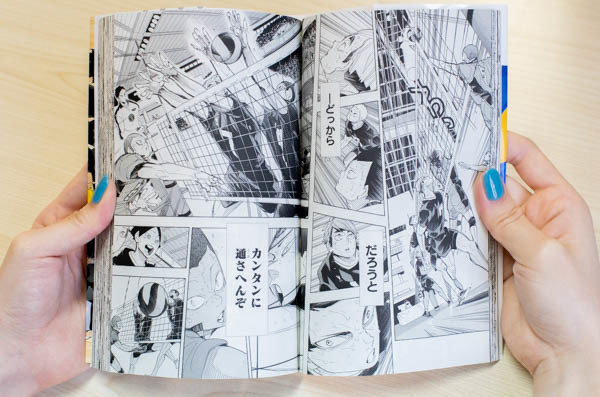 It’s the second round of the Spring Interhigh Tournament. Karasuno High School competes against Inarizaki High School, which has twin brothers: Miya Atsumu, who is known to be a No.1 setter and Miya Osamu.
Karasuno is suffered from the smart twin brothers who can mimic Hinata and Kageyama’s “Freak Quick” only by watching it.
The scores already reaching 30s, both teams are feeling under pressure. 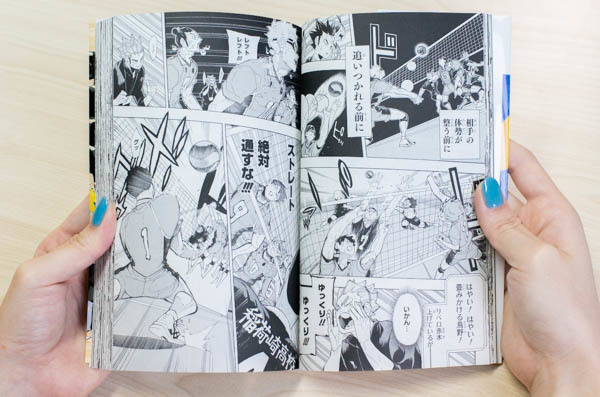 Karasuno seems to get rid of such an intense rally, by performing great passes. They also manage Inarizaki’s quick, trying to win. 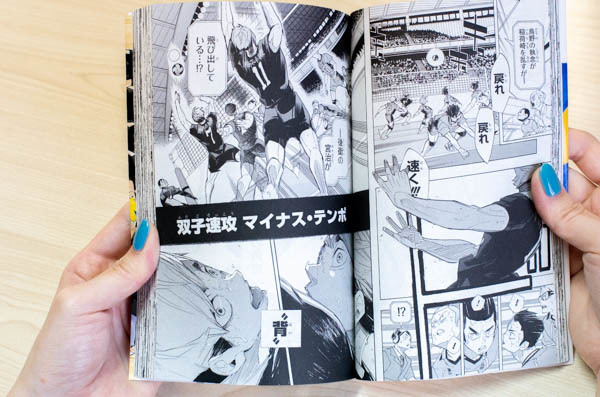 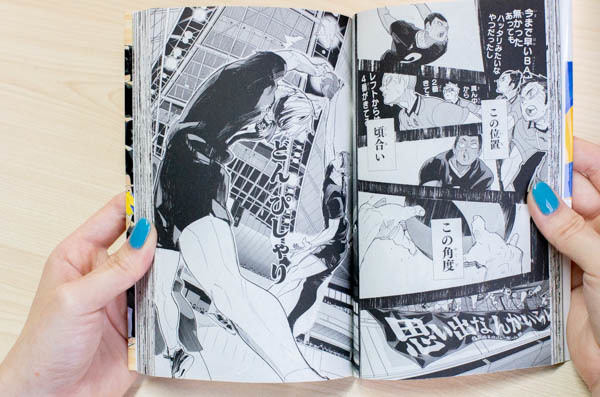 There, Miya twins execute a back row quick which they have only attempted as a bluff!
There’s no way they can stop them. When everybody thinks that way, Only Hinata and Kageyama are already in position for the block. This gives Karasuno a victory.
The ’speed’ could be an awesome weapon but it’s not all-purpose. Hinata and Kageyama have figured that out a little earlier than Miya twins did, which lead them to a victory……!”
Inarizaki High School, Miya twins, lose by a close margin. As soon as they know they lose, Osamu says to Atsumu, “We’ve got a little too excited, huh?” 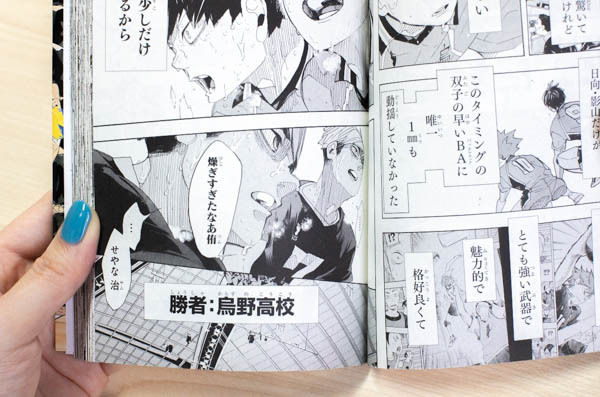 While shaking hands with the other team after the match, Atsumu says to Kageyama, “See you” and to Hinata, “Remember, I’ll toss the ball for you” and leaves him with the last words “Be prepared. I’ll beat you in the IH (Interhigh Tournament).” 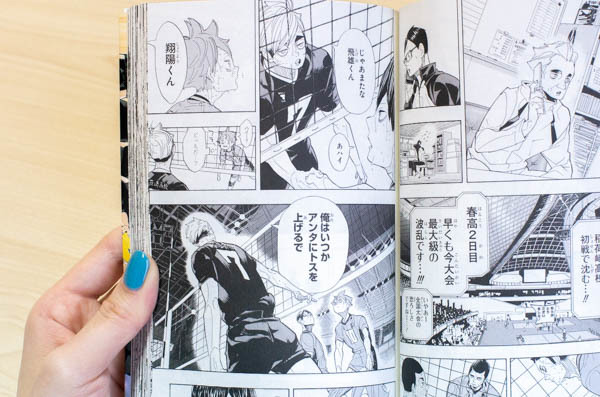 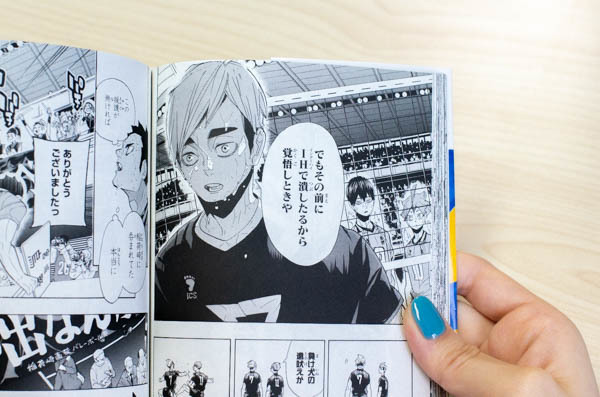 At the last moment of the game, Miya twins knew that they were in perfect sync more than anybody. That’s why they thought that they were ‘a little too excited’ with their eyes secretly glaring. And Atsumu were quietly burning with spirit towards the next stage…… I mean they’re too cool……!

Since Miya twins were still the 2nd graders, they still have more chances to compete in matches, unlike Ushiwaka or Oikawa!
In the Spring Interhigh Tournament version, it depicts how Hinata, Kageyama and Tsukishima grow, while focusing more on the 3rd graders’ ‘last’ moment, who are in the center of Karasuno. This kind of description about the future, implied by the rival, makes us feel lonely and excited at the same time……
This series of interaction really made me feel elated!

By the way, vol. 33 that contains this episode has an extra edition newly-made manga depicting members of Inarizaki High School volleyball club too!
The scene is where they take a picture with the background with the banner but…… 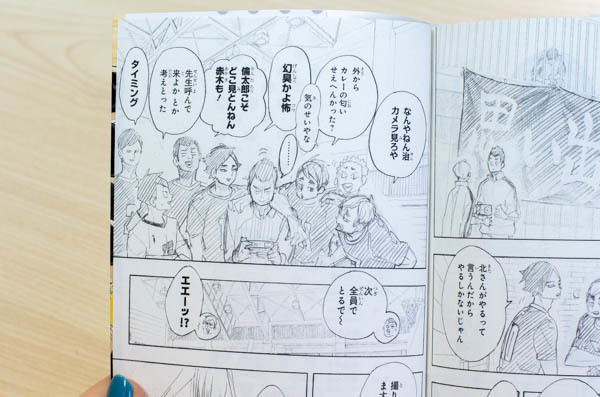 Did you know this picture is the illustration of the spine?
First, read the episode of Inarizaki match, then read the extra edition, checking the spine as well, and finally read vol.44…… I bet you will want to read the Inarizaki match again!

By the way, the Inarizaki match depicts in comics from vol.28 to 33 (the whole six volumes)!
Why don’t you check it out before watching anime?
Haikyu!! Vol.33
▸

Oki-doki! This is all for today’s article!
Which scene would you recommend most?

“I like THIS chara in THIS scene a lot!”
“I want you to feature THIS scene of THIS team!”
If you have this kind of feedback, please feel free to reply to us at Manga Republic’s Twitter!”
Twitter: @Manga_Republic
▸

’Haikyu!!’ became one of my most favorite Manga eight and a half years ago, when I just became otaku.
I could not be happier that I was able to read from the beginning all the way to the end.
Knowing that there is no longer ‘Haikyu’ in Weekly Shonen Jump, I already miss it…… Thank you so much, ‘Haikyu’ and its original creator, Furudate Haruichi Sensei!
And thank YOU for reading this article all the way to here. I bet you must like Haikyu!! too!

All right! I’ll see you all at the next article! Bye ~~~!
Haikyu!!, Weekly Shonen JUMP