Hello, everybody! Actually, I really don’t know much about the Crime Suspense. It’s Saori from Manga Republic!

Aaand hello everybody. I’m Otaku Republic’s Boss.
We frequently see the Crime Suspense as a subject of the drama on TV, no?

What Is the Crime Suspense?

The words are derived from the English word “crime” and it means the titles such as drama or anime, which contain a thrilling development, dealing with various “crimes” and “incidents”. The difference from the mystery titles is while the mystery titles focuses more on the “incident that happened in the past” when they are dealing with the crimes, the crime suspense focuses more on the “ongoing crimes”. 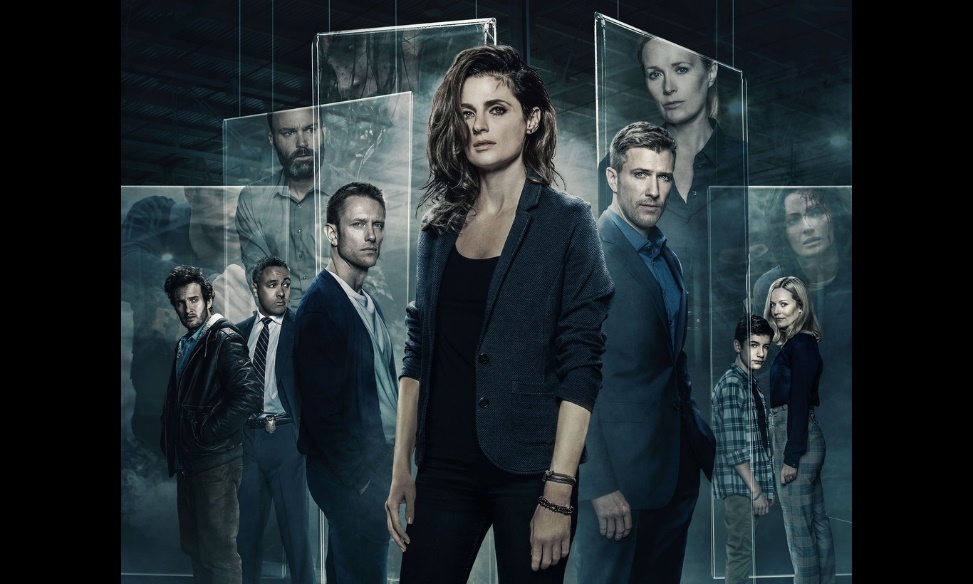 Mmm…… The titles, dealing with the ongoing crimes, huh?

It’s hard to explain but…… I would say the storyline develops more speedily. While the mystery focuses on detective stories, this genre contains more suspense element, which gives us a sense of tense, I guess.

I see. Now we learned what the Crime Suspense is like……! Let’s get started! The Manga we’ll feature today is……!

【Crime Suspense】My Sister Got Murdered. A Revenge Story by a Boy, Taking Advantage of the “Dream”: Yoru ni Naru to Boku wa! 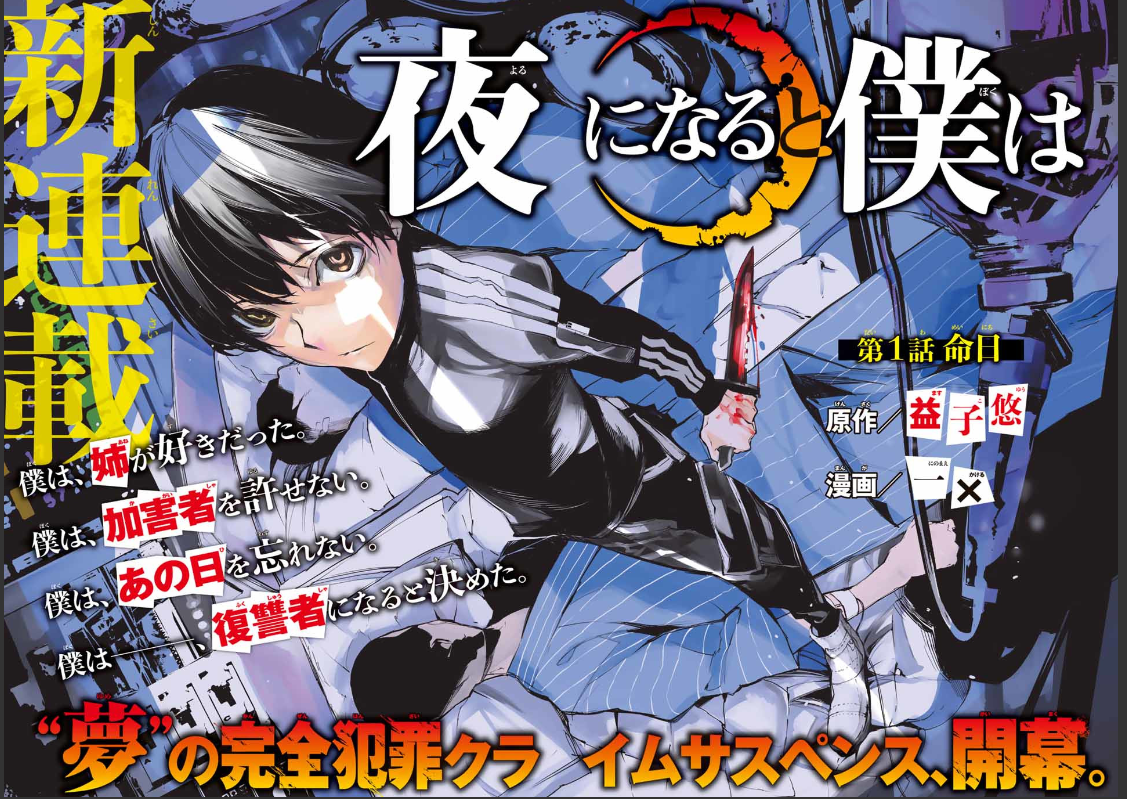 What kind of story is At night I move (Yoru ni Naru to Boku wa)?

It’s a four-volume crime suspense-genre series, serialized in “Weekly Shonen Magazine”. It started being serialized since 2018 and was concluded in 2019.
It drew so much attention from beautifully drawn illustrations, a battle of the mind and the “way of taking revenge” that the boy acquired.

It’s a crime suspense genre with the theme “revenge”, huh?

Right. And it depicts high-level battle of the mind as well. It even made me feel as if I was reading DEATH NOTE from the beautiful illustrations and the battle of the mind, where they try to entrap others……!!

What kind of story is At night I move (Yoru ni Naru to Boku wa)? 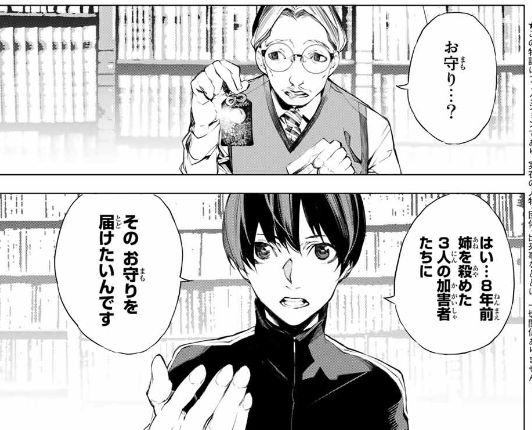 The main protagonist, Mochizuki Wataru, is a college student. The story begins when he is visiting the cemetery of someone he knows.
It is Wataru’s older sister.
When she was 14 years old, she was cruelly raped and murdered by three juvenile delinquents. 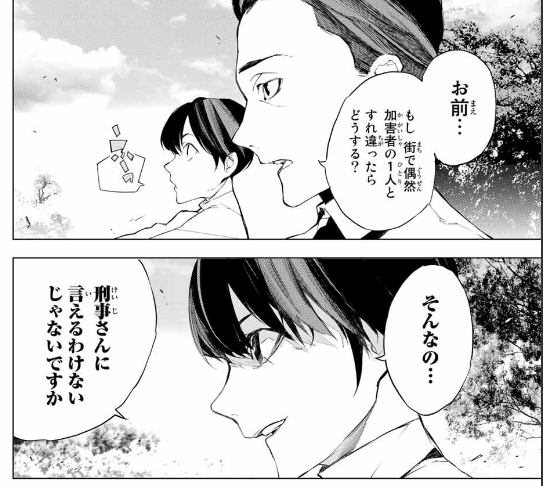 Protected under the Juvenile Act, the delinquents have been allowed to re-enter society. Wataru is asked by the detective, who comes to the cemetery with him, “What if you ran across them on the street?”
“Well…… do you even think I would answer that question, detective?”
Wataru replies without showing him either anger or sorrow. After his family and the detective left the cemetery, Wataru started to take an action.

When Wataru asks his lawyer to give the amulets to those perpetrators, he tucks GPS into them.
He wants to see them once.
He is going to forgive them if they are living their lives, reflecting on their past conduct, even a little bit…… 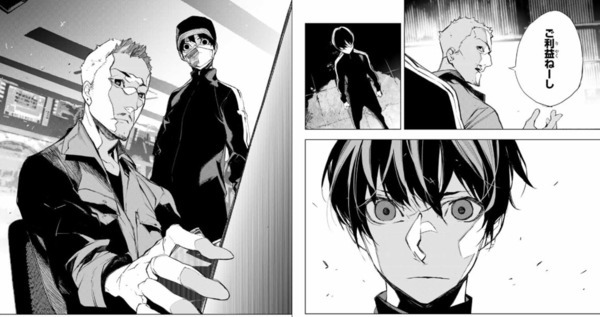 However, it wasn’t that easy.
They “have not changed at all” since they killed his sister. It seems they are having a freewheeling life. It’s as if they were sneering at him, who has been struggling with sorrow, despair and hatred for eight years.
Wataru had made a decision.
If those three are still “bastard”, just like before……
He will kill them all without leaving any evident.

Wataru calls for one of them to the abandoned building and tries to cut him with a knife, when he finds out that he is just a substitute. Baba, one of the delinquents, realizes that it’s fishy when he receives the amulet from Wataru, so he has his brother keep it. 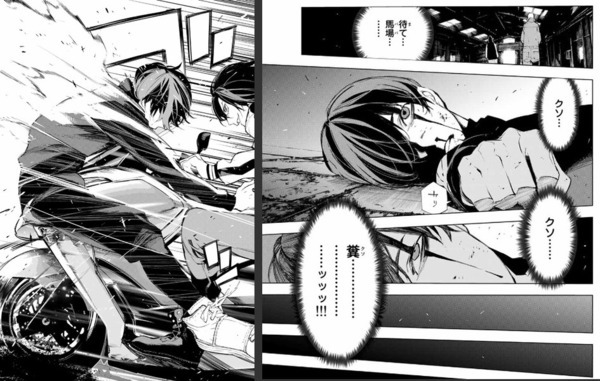 Wataru is counterattacked and almost dies.
He manages to survive at the hospital, pretending that “he got a hit-and-run accident on the highway”.
He thinks about his sister even when he is dying.
She was just a normal girl but to him…… she was the only sweet “older sister”: in the whole world. 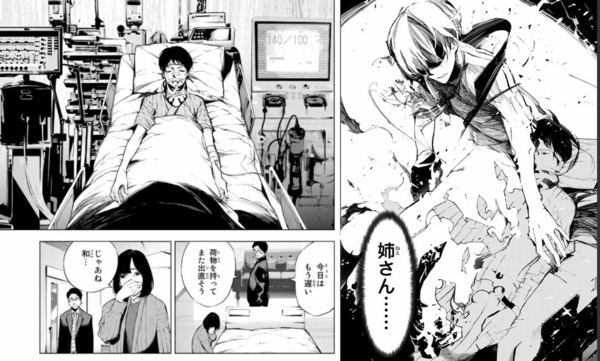 Then, Wataru realizes a weird sense.
He is floating.
When he becomes conscious…… He acquires the ability, where “he can get into peoples’ dreams”. 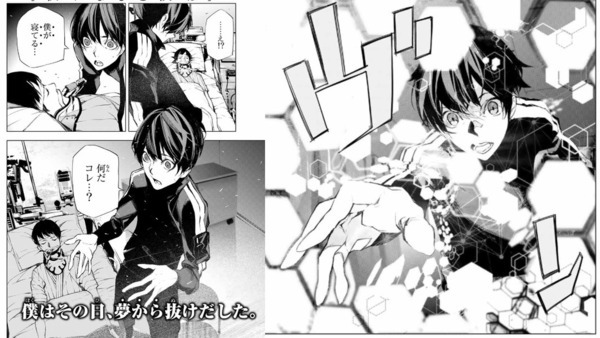 He finds out that what happens or what he influences in those dreams also reflects the reality.
If he pulls out the cavity of a boy, who is struggling in his dream, the cavity actually falls off in the next morning…… If he kicks the crotch area of the doctor in his dream, who does sexual harassment to the nurse, that area is swelling up on the next day……

Wataru figures out. If he competes “revenge” in their dreams, he is able to complete the “perfect crime”. But the problem is…… “how” he can get into their dreams and take the action of revenge.
Other two delinquents must have heard about Wataru’s plan of the revenge, already. Another thing he needs to do to get into their dreams is to conduct some specific restrictions as well. It’s not the perfect ability for sure so…… how should he use it?
Now the battle of the mind between Wataru and the delinquents is about to start……! 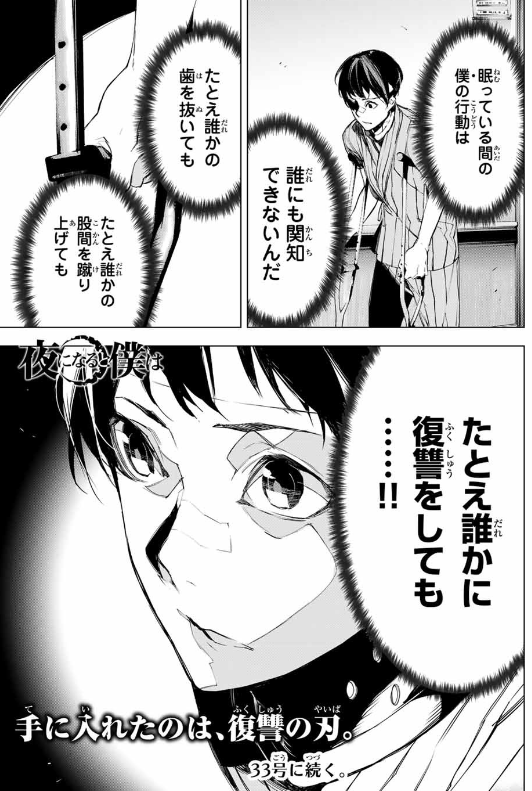 It’s about the revenge so I know Wataru ends up winning, huh?
Don’t you ever think like that!

The real attraction of this manga is “how he will revenge”! It’s full of advance hints too! The life-threatening battle of the mind by Wataru, with beautifully-drawn illustrations, is just incredible!!

Another good thing about this title is that it’s already concluded with four volumes so it’s easy to read! What is Wataru’s revenge story going to be like at the end……?? Why don’t you check it out through comics!!
Four Volumes in Total! Check HERE for Comics of At night I move (Yoru ni Naru to Boku wa)! 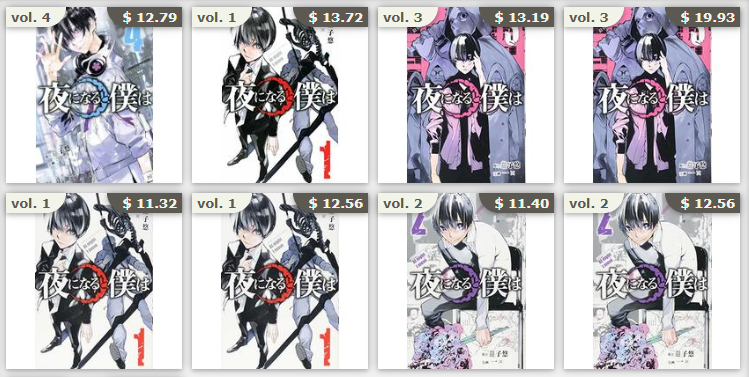 Already now! This is all for today! We’ll see you all at the next article!
Bye-bye~!
At night I move (Yoru ni Naru to Boku wa)