The story of Future Diary 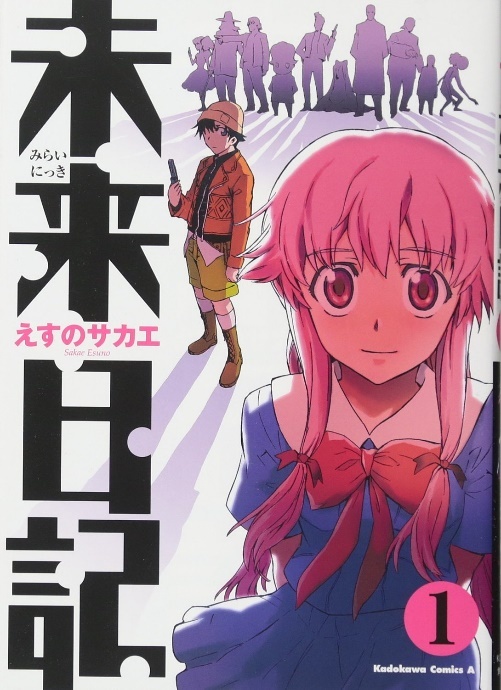 Future Diary, also widely known for its Japanese name “Mirai Nikki”, is a psychological thriller manga series written and illustrated by Esuno Sakae. The manga was serialized in Kadokawa Shoten’s Shonen Ace magazine from January 2006 to December 2010, with a total of 12 volumes.
The manga’s plot depicts a battle royale between 12 chosen individuals, who wield “Future Diaries” – a special device taking form of a mobile phone that can predict the future. These 12 individuals have to battle against each other until the last survivor emerges, becoming the heir to the God of Time and Space.
The manga series was widely popular in Japan and North America ever since its release. In October 2011, the series was adapted into a 26-episode TV anime series and was later aired in North America. After the main story ended, several side-stories about the cast of characters and the story’s epilogue were published in Young Ace Magazine.
Future Diary (Mirai Nikki)
▸

The diary that predicts the future

On a normal morning, Amano Yukiteru woke up in his room and per usual habit, he checked his cellphone. To his confusion, Yuki found several entries about events that would happen later that day already written in his phone diary. 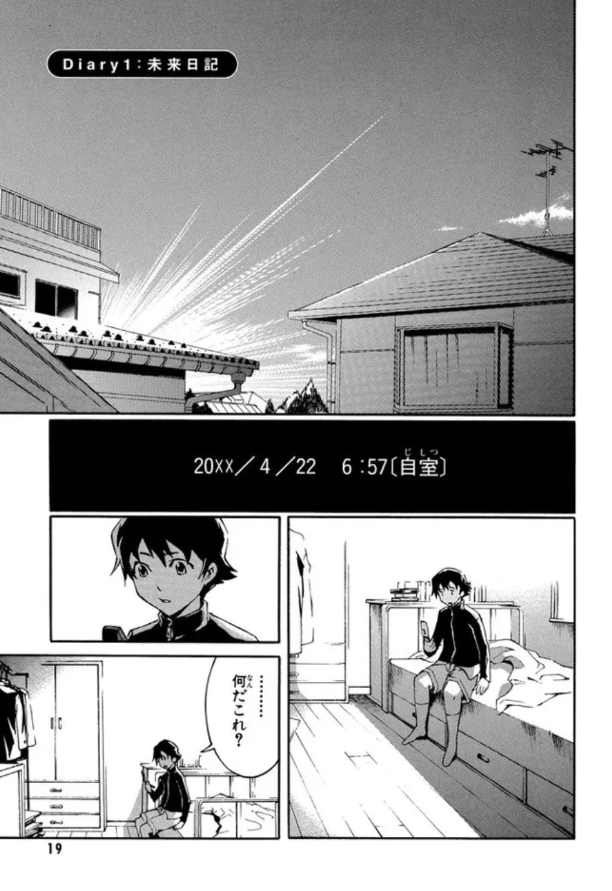 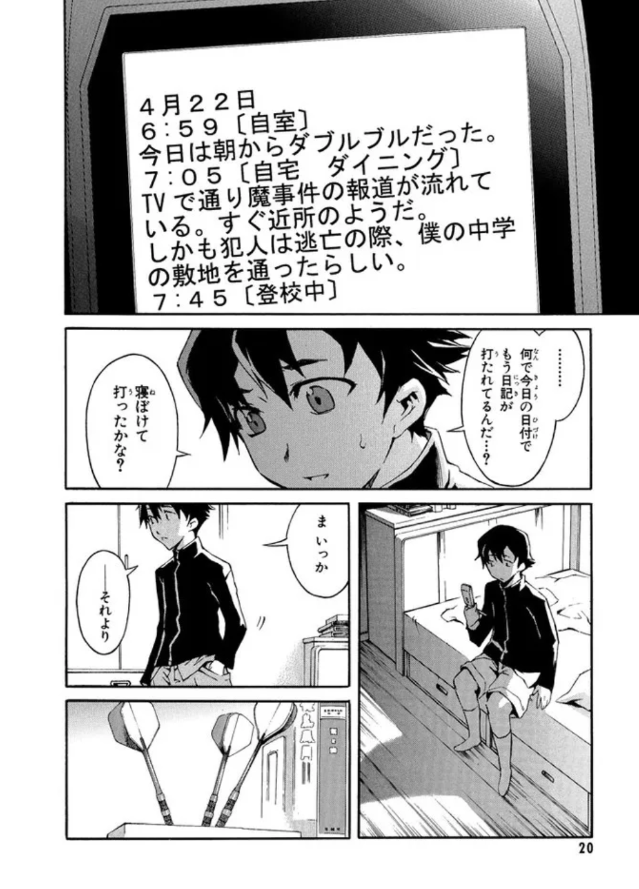 Yuki quickly brushed it off thinking he must have written it in his sleep, and continued on with his normal routine. Before leaving his room, Yuki did a little ritual he called fortune telling through dart throwing and hit a bulls-eye – just like the first prediction on his phone. 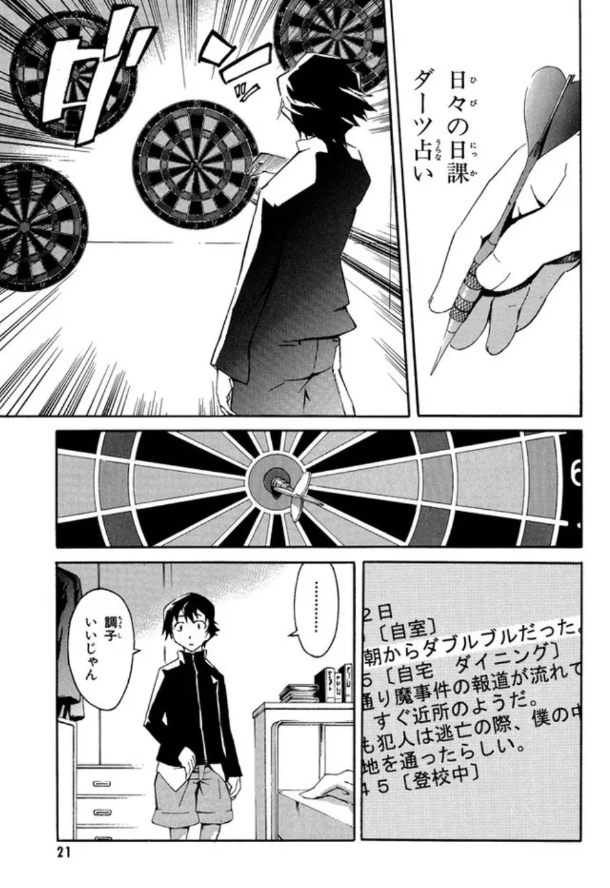 Later while watching TV, Yuki found out about a serial murderer on the loose in his area, as written in the second entry on his phone. Yuki convinced himself that these were just coincidences and went to school. 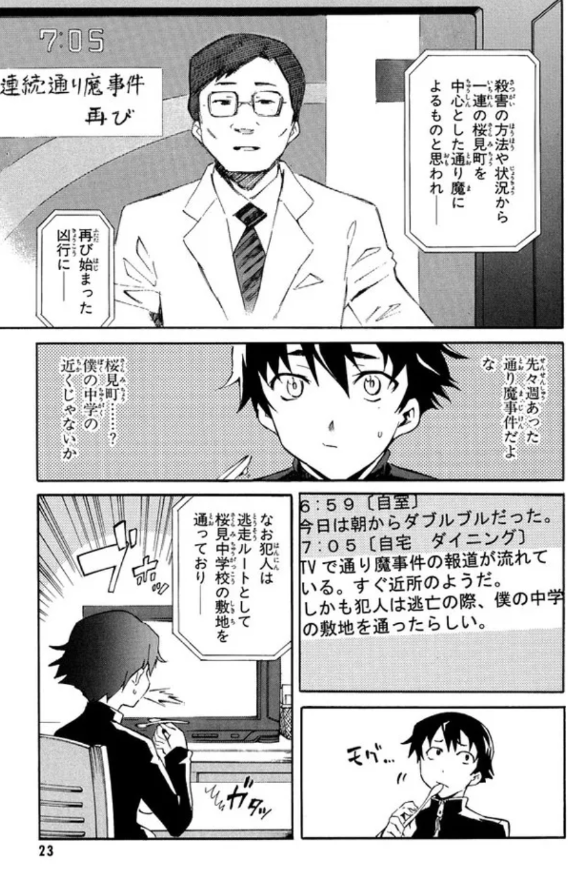 However, the more he continued on with his day, Yuki started to see more of the events written beforehand on his phone turned out to be true. He slowly had to believe that his phone somehow had gotten the power to predict the future.
After school, Yuki went home and slipped into an imaginary place in his mind. There, Yuki had a conversation with his imaginary friend called “Deus Ex Machina”, or “The God of Time and Space”. 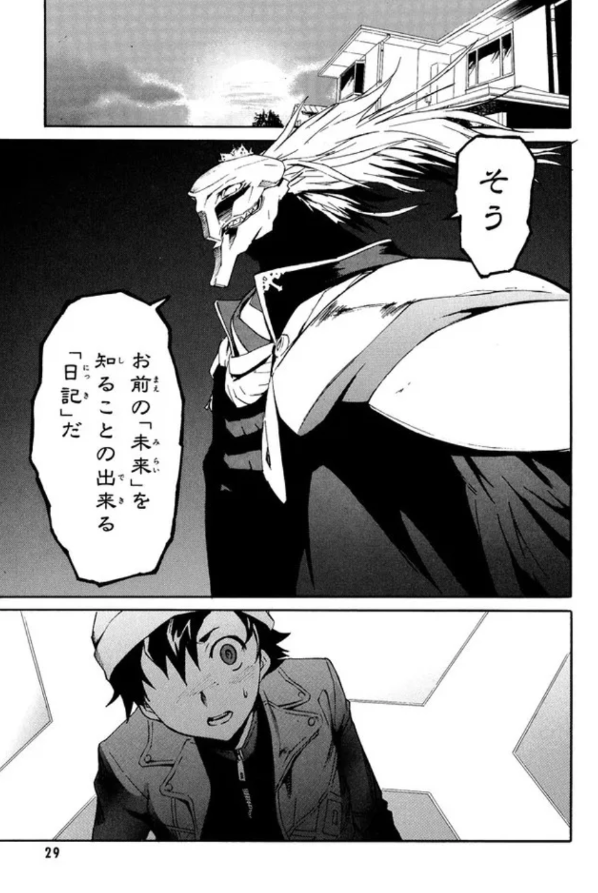 Deus told Yuki that using his godly power, Deus had turned Yuki’s cellphone into a diary that would predict the future. The diary could display events of the next 90 days on his phone, one day at a time. Deus also warned Yuki that if his phone were to be destroyed, the same would happen to Yuki, as the dairy’s holder. 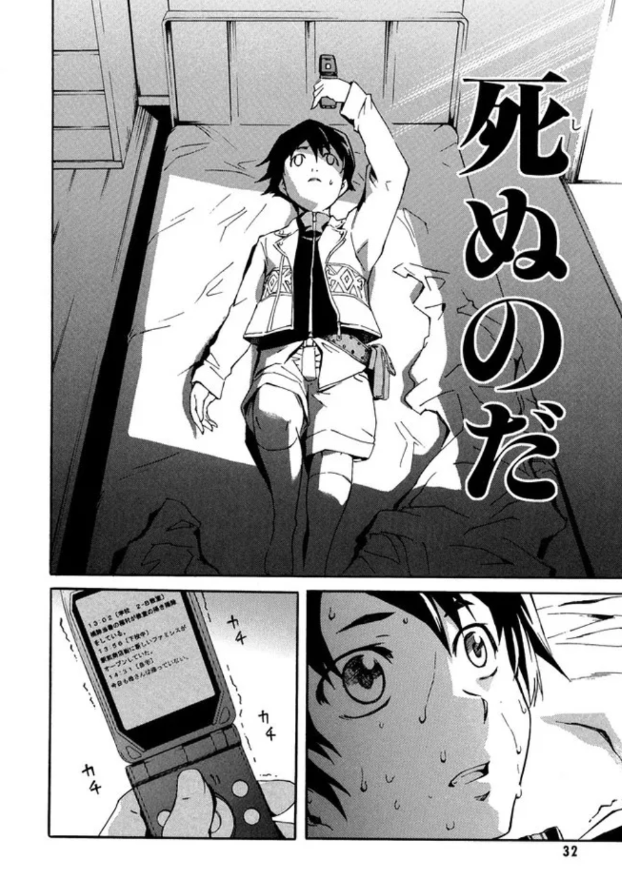 The following days, Yuki utilized the power of his future dairy to excel at school. Seeing a normal student like Yuki suddenly got top marks irritated the other students. They planned to ambush Yuki and give him a beating, but failed to do so because Yuki already knew about their plan. 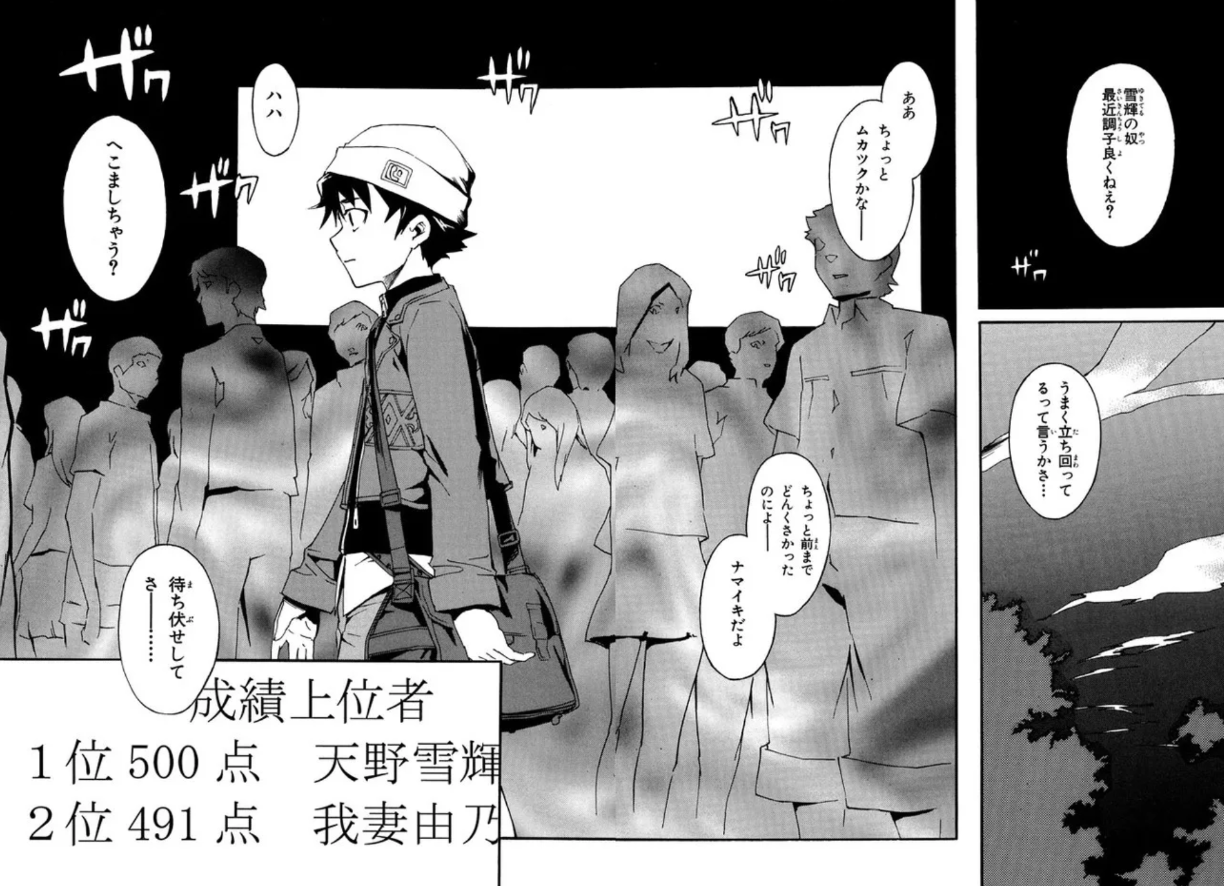 Happy by his new found power, Yuki enjoyed his victory alone while mocking the other students. While Yuki was celebrating, his eyes met with Gasai Yuno’s, the school idol. Paranoid by thinking his secret might have been exposed, he quickly laid low and avoided attention. 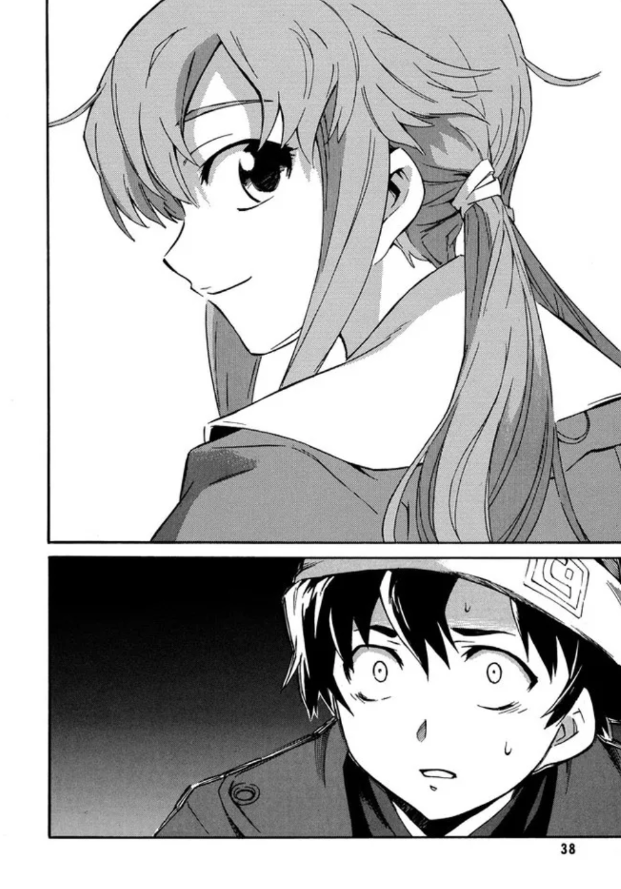 When class was over, Yuki went over to Yuno’s table and found a clay doll that was left there by her. It was in a shape that only Yuki should’ve known – Deus Ex Machina’s assistant. While in shock, Yuki’s phone rang and the diary entry changed.
This time it only showed that he would be chased and killed by the serial killer and ended with the words “DEAD END”. 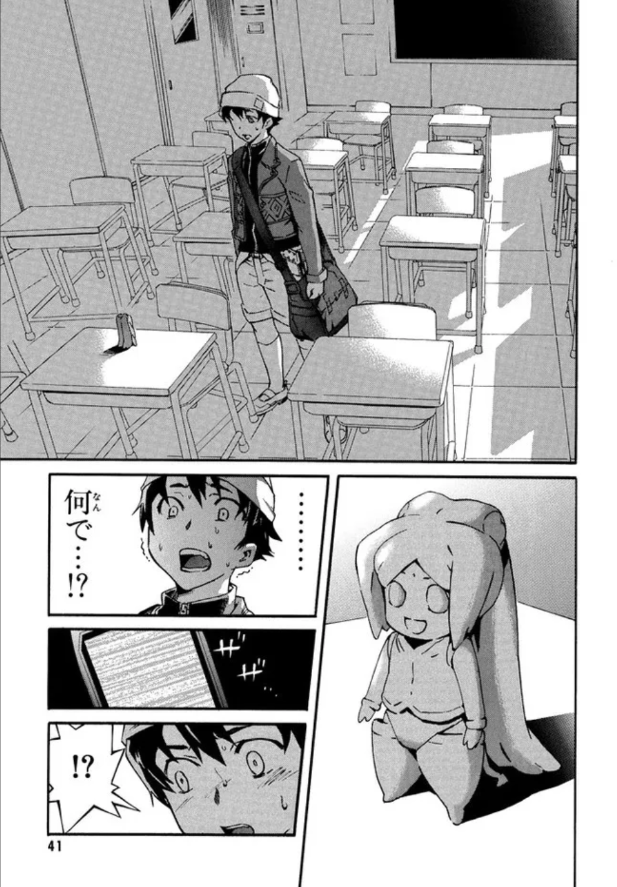 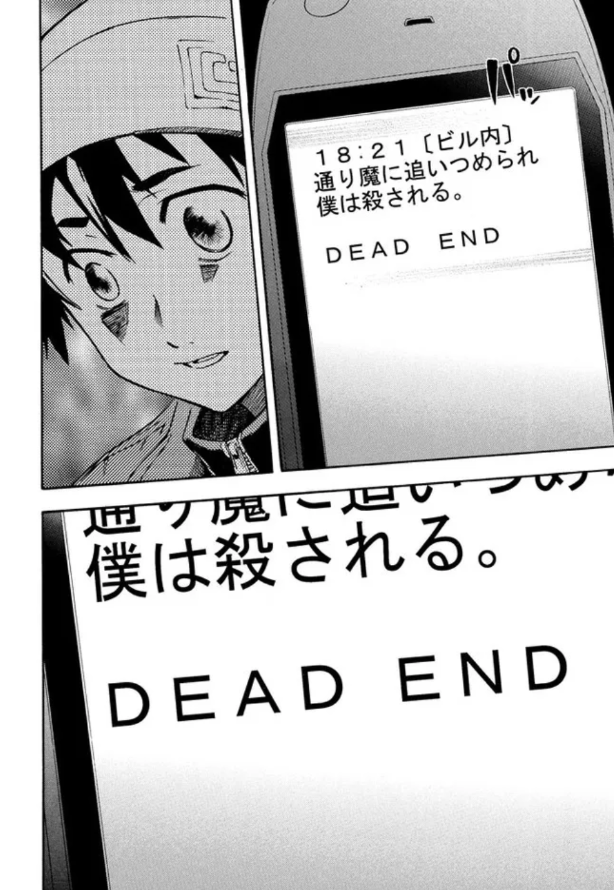 Yuno appeared from behind Yuki, confirming what was written would be his future. Frightened, Yuki immediately fled from the classroom. On the way, he noticed that his phone’s diary started to change. 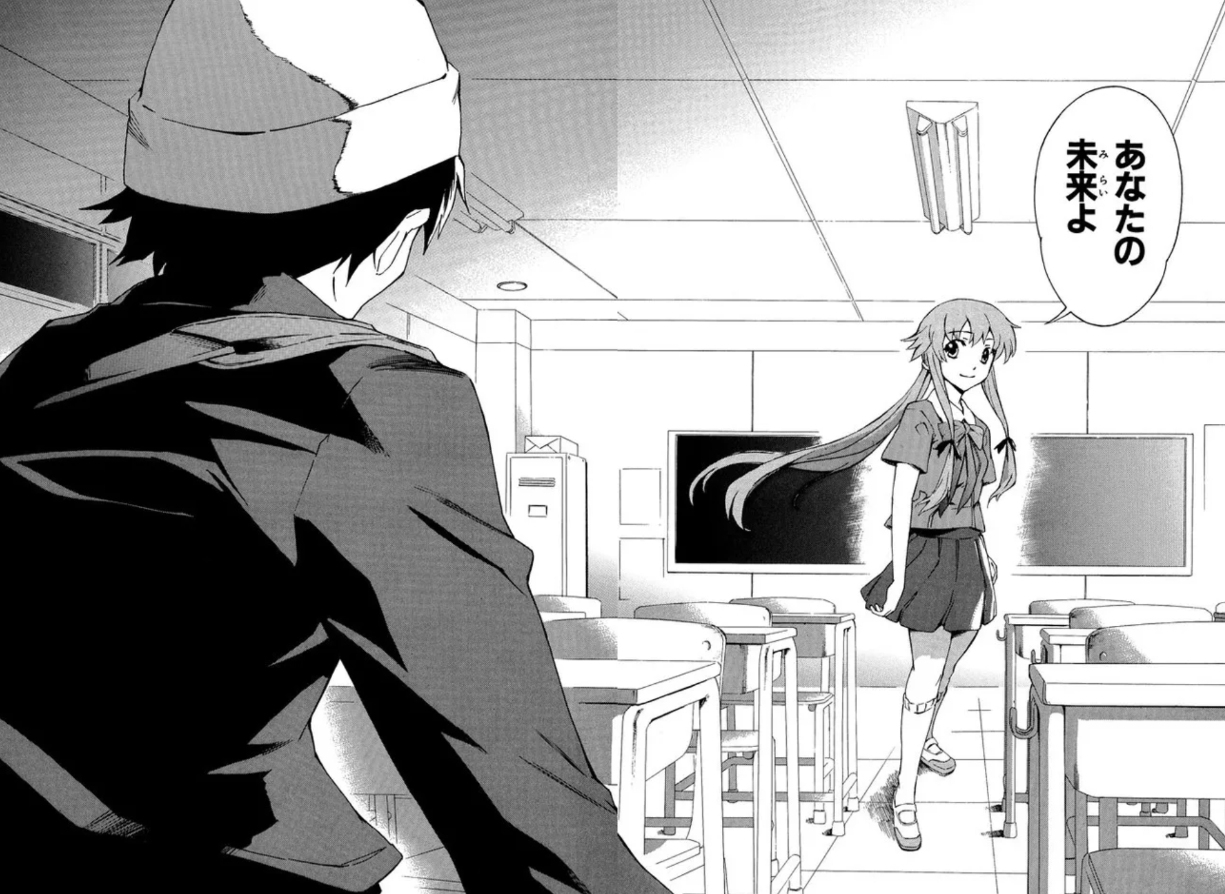 Even with his diary, Yuki couldn’t escape from Yuno. When he entered an elevator in the nearby construction site, Yuno jumped in right before the door closed. She had somehow predicted exactly where Yuki had gone. 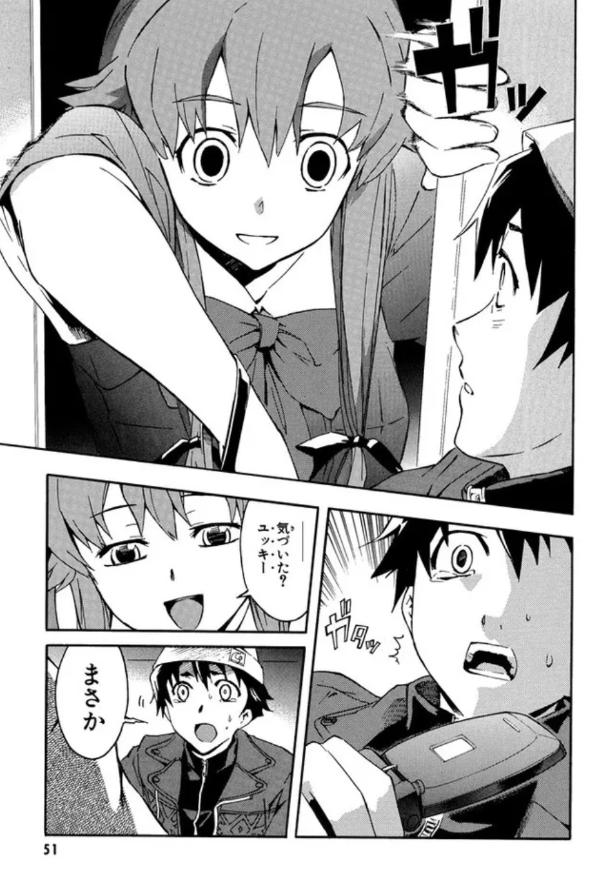 At that moment, Yuki realized that Yuno must have been another diary’s holder just like him. Fearing for his life, Yuki reached for the dart he had in his bag, trying to defend himself. Before he had the chance to react, Yuno had lunged in and kissed him. 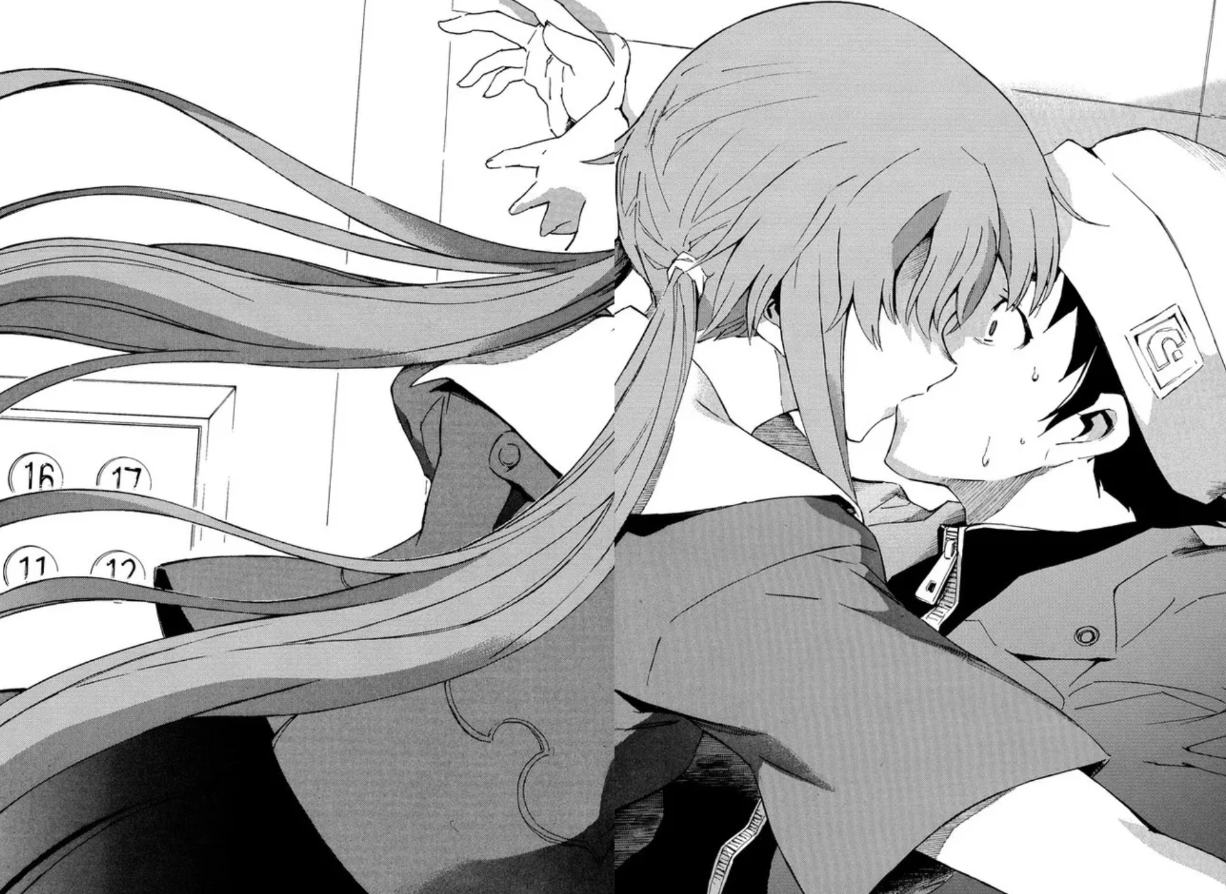 Yuno pointed down at the serial killer that had been aiming at Yuki, stating that she was another future diary’s holder. She knew the killer would come for Yuki’s head because of her future diary – a diary that reported Yuki’s actions every ten minutes. She called it the “Yukiteru Diary”.
Realizing that Yuno is an extreme stalker, Yuki had no choice but to believe in her words in order to save his own life. He changed the elevator destination from the 14th to the 17th floor to avoid the killer. 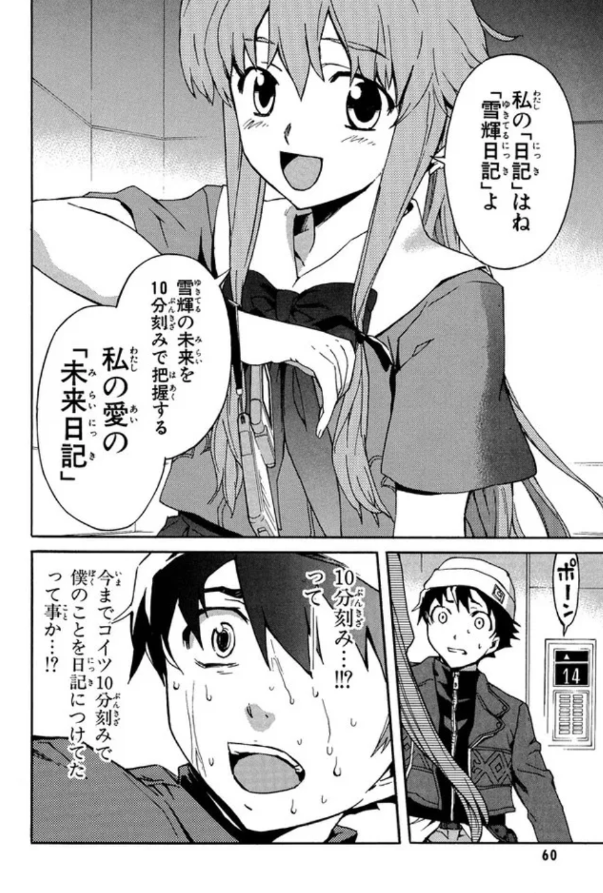 When the killer reached the rooftop, he couldn’t find Yuki as his phone had predicted. Confused and wanted to re-confirm Yuki’s location, the killer pulled out his phone. From his hiding place, Yuki found the perfect moment to strike. He threw the only dart he had straight through the killer’s dairy. 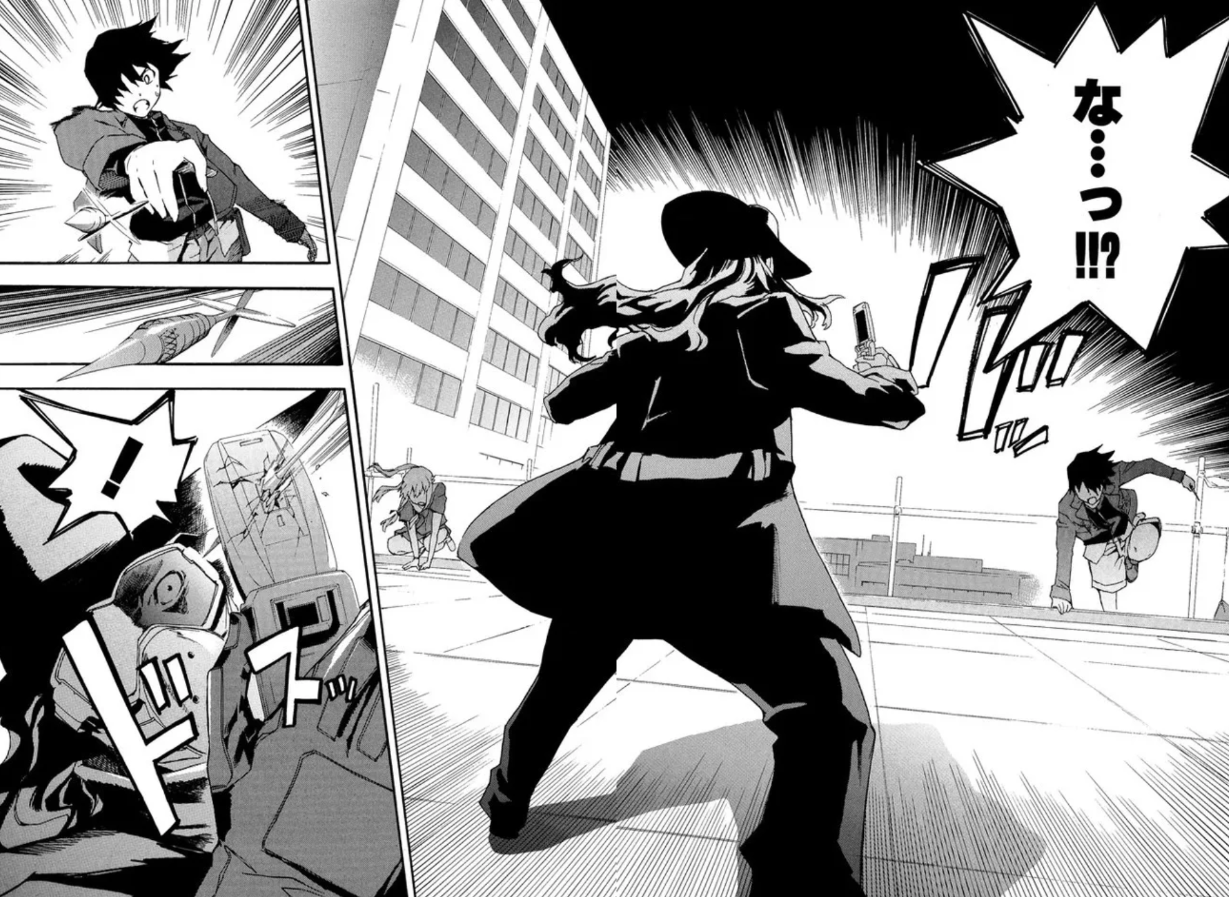 A giant hole appeared on the killer’s body, just like his dairy. His body started to twist and turn and got pulled into a vortex until there was nothing left of him. 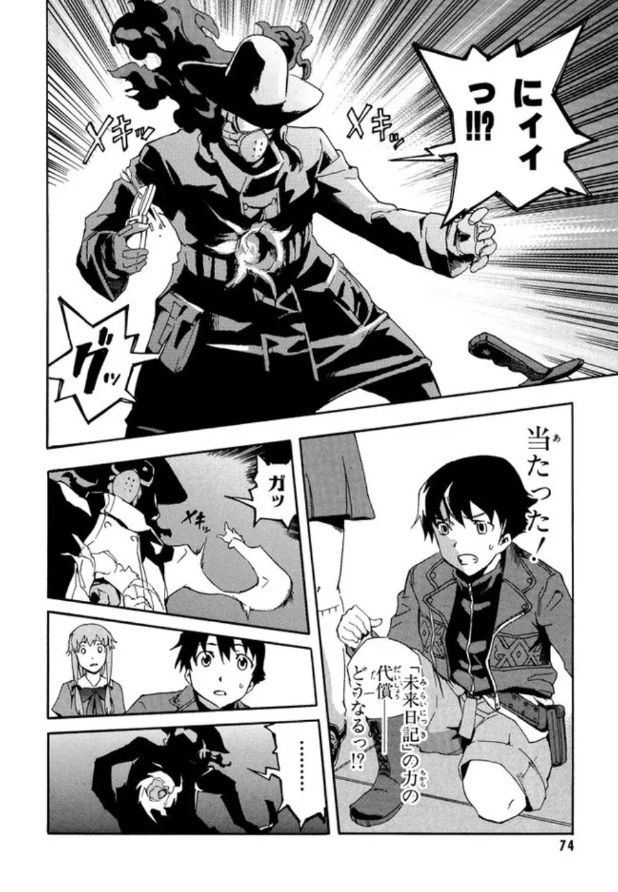 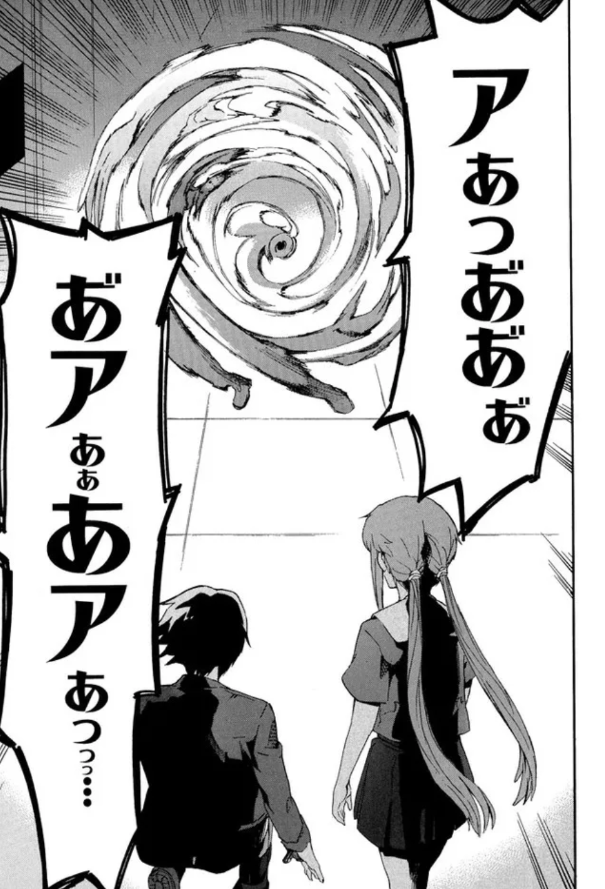 Later that day, Yuki confronted Deus Ex Machina about the other dairy’s holders. To that, Deus replied that it was simply a game – a battle royale that would give the last person standing the chance to become Deus’ successor. In other words, a survival game for all the future diary’s holders. 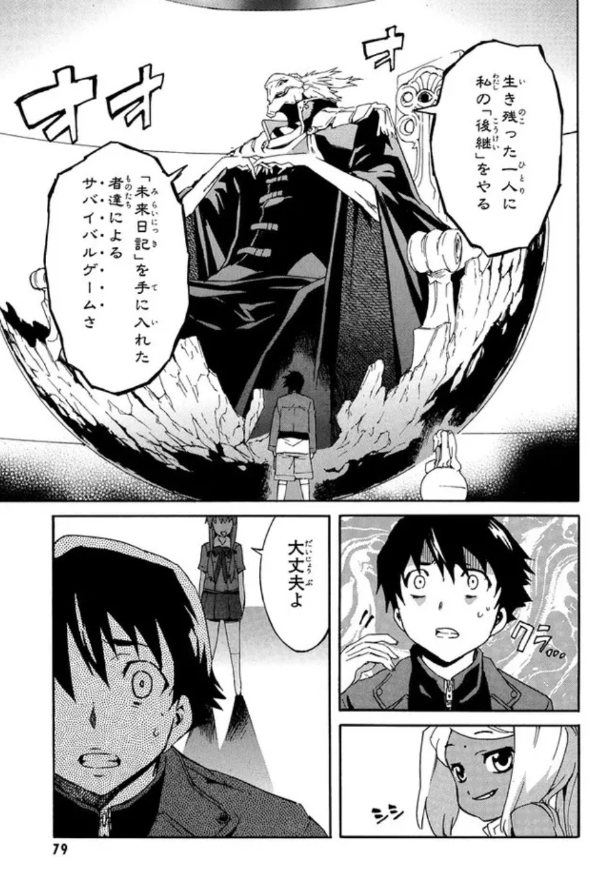 While Yuki was in shock at the revelations, Yuno appeared behind him, vowing to protect her love. Naturally, this made Yuki even more frightened! 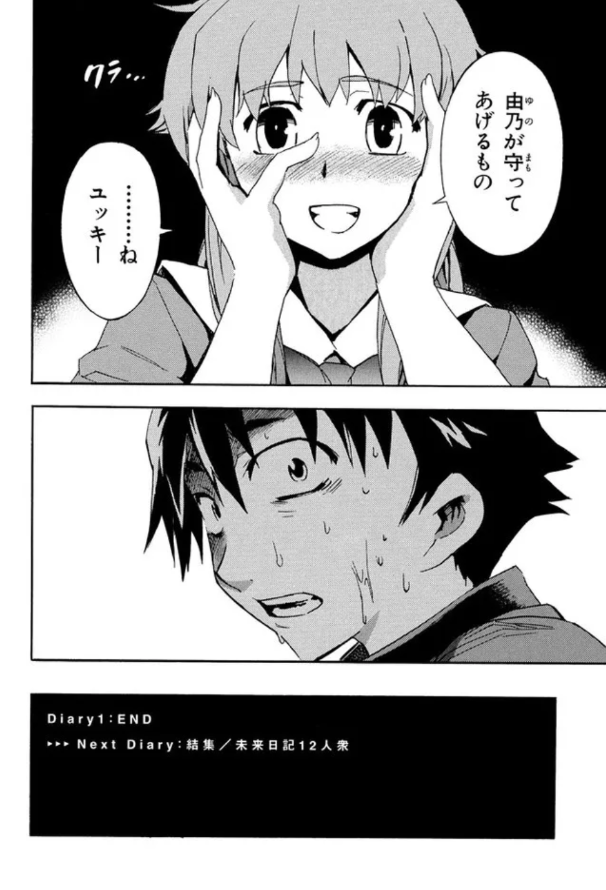