What is “Baby Steps”? 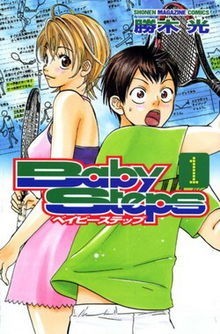 Baby Steps is a Japanese sports franchise written and illustrated by Hikaru Katsuki.
The manga was serialized in Kodansha’s Weekly Shounen Magazine from 2007 to 2017. Its chapters are compiled and published into 47 separate volumes. The manga series won the 38th Kodansha Manga Award for the best Shounen Manga Category.
An anime adaptation of the manga was also released in 2014, with the anime adapted by Studio Pierrot.
Baby Steps
▸

Eiichirou Maruo, a first-year honour student who is bored with his routine, is the protagonist of the story. He joins the tennis club and is immediately enthralled by it. Despite his lack of expertise and physical conditioning, he develops an extraordinarily strategic approach to tennis using only his intellect, devotion, and work ethic.
We are introduced to Eiichirou, who is referred to as E-Chan by everyone. He is a 15-year-old honour student who is well-known for his academic excellence. The teacher writes an equation on the board and calls him over. He walks up to the board and solves the equation with ease. 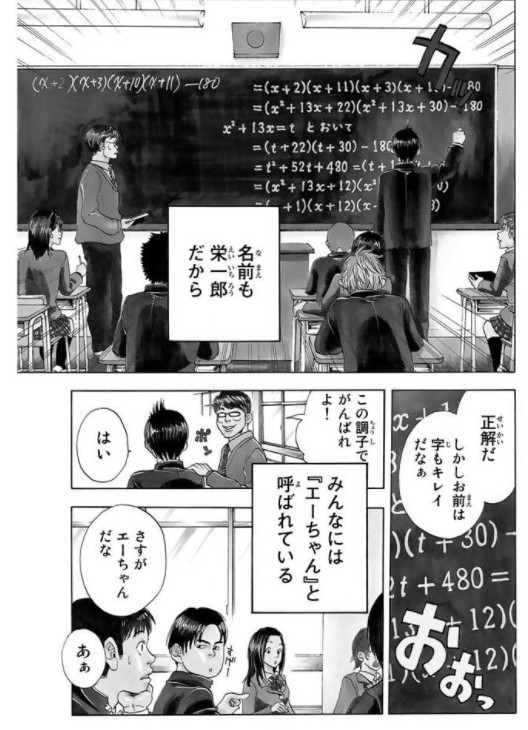 We see Eiichirou having lunch with his friend Kageyama, who is teasing E-Chan about being a weird perfectionist and how even his lunch box was perfectly arranged. Kageyama ruins the symmetry of Eiichirou’s lunch box, causing the latter to scream, gaining everyone’s attention. 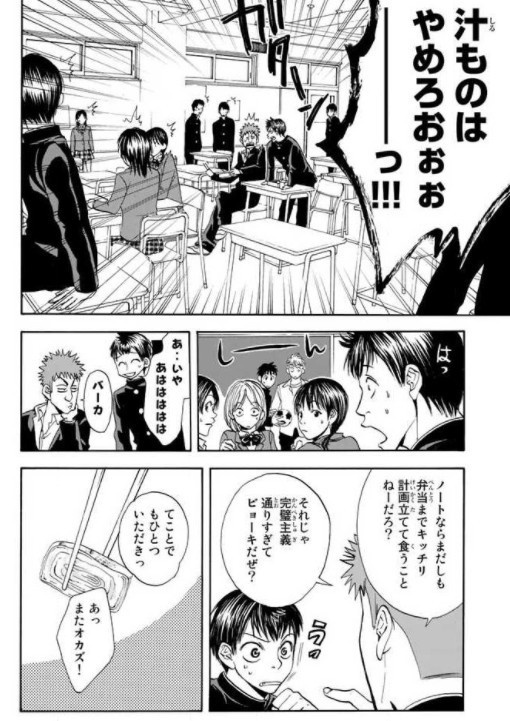 An attractive girl from another class, Tatsuki Natsu, bursts into the class to ask her friend Yuki for her notes. Yuki instead tells her to get E-Chan’s notes as the class called him a reference book. E-Chan hands over his perfectly symmetrical notes, and Natsu is weirded out by how perfect they are. 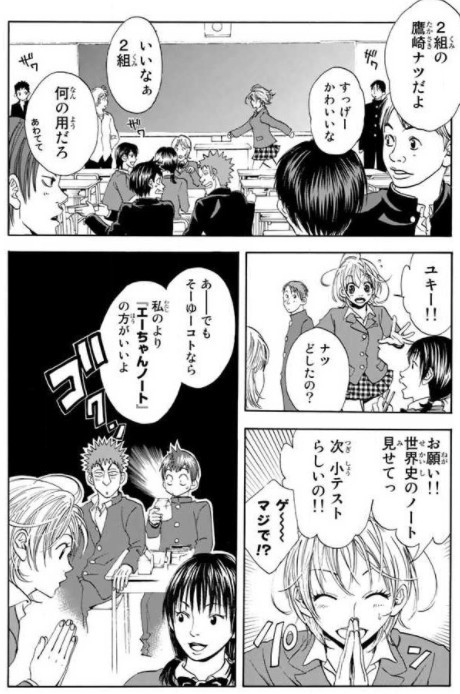 Eiichirou is dismayed by the blunt comments about himself that he overhears. Natsu inquires about World History notes, and as Eiichirou doesn’t have any copies, he gives her the original notebook in which he took notes, which was a rare occurrence. Natsu expresses her gratitude, but as she walks away, she trips and crumples the notes. The entire class is stunned, as is Eiichirou, who is barely surviving. Before leaving, Natsu dusts off the notes and apologises to Eiichirou. 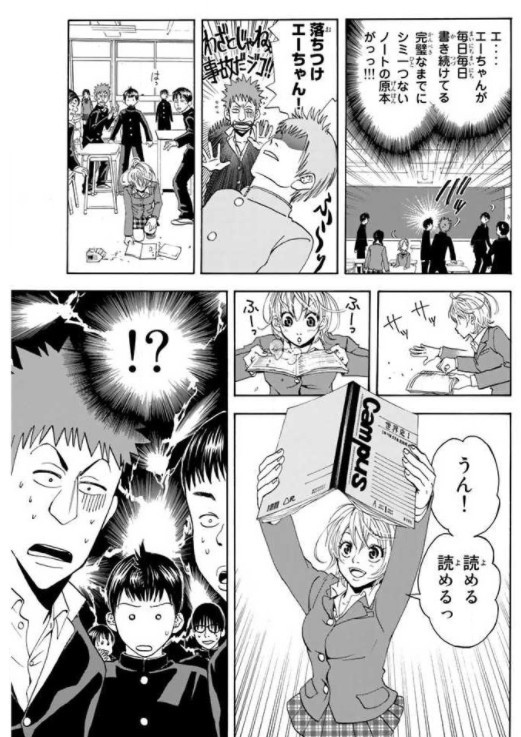 Kageyama urges Eiichioru to brighten up because the notes were just notes and asks Eiichirou about joining a club on their way home. Eiichirou says that he needs to exercise and that's why he's going to join a sports club. Eiichirou's mother delivers him a flyer for a tennis club after he arrives home. He is forced to go check it out. 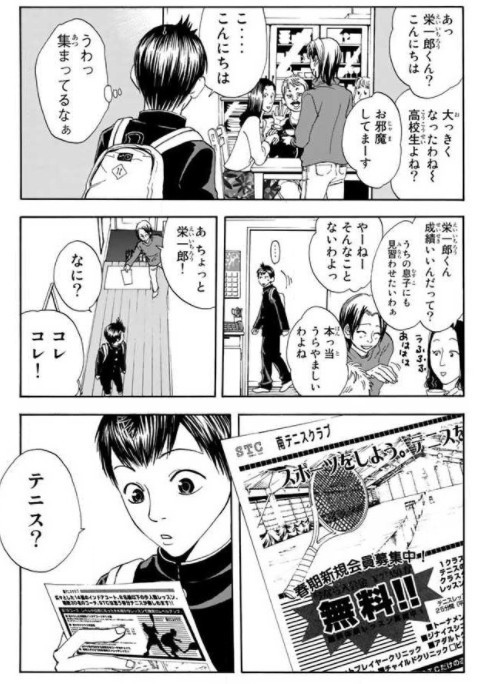 He goes to check out the club, and is amazed by how massive it is. While checking out the faculty, his eyes catch Natsu practicing tennis. Eiichirou continues to observe while concealing himself. A kid notices him surreptitiously observing the game, and informs the coach about Eiichirou being a spy. Natsu notices the commotion and recognizes Eiichirou, as she clears up the confusion and introduces him to her coach. 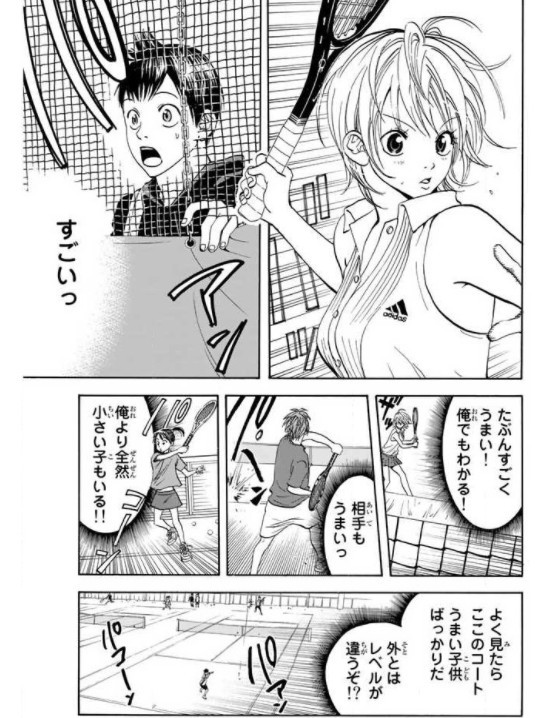 Eiichirou explains that he was considering coming here since he needed to get some exercise. The coach forces him to play a game, despite his apprehensions about joining. A crowd starts forming around them. She introduces Eiichirou as “The All-A E-Chan,” a title whom everyone is impressed by. Eiichirou’s frail body can’t even handle the warm-up, as he collapses from exhaustion. After re-gaining consciousness, he thinks about escaping while no one is looking, but is stopped by Natsu. 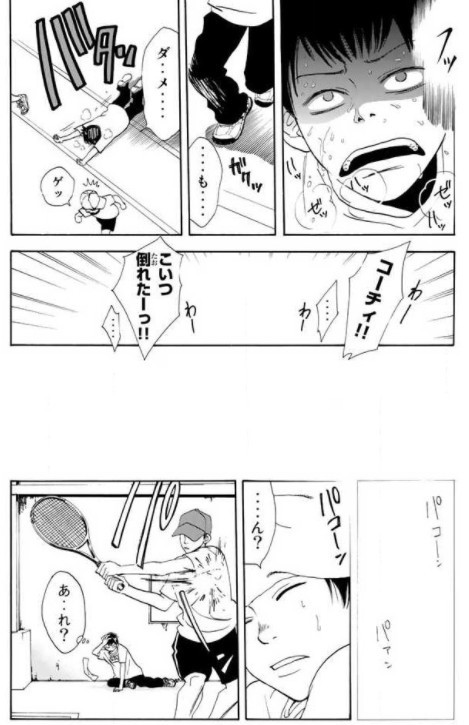 Natsu sees him leaving and feels a bit sad. She asks him if he enjoys studying, upon which he claims that he doesn’t love studying but only does so in order to prepare for his future. Natsu tells him he's going too far, because she believes that one should only do things that bring them joy. She claims that tennis is more than a pastime for her, as she aspires to be a professional one day. 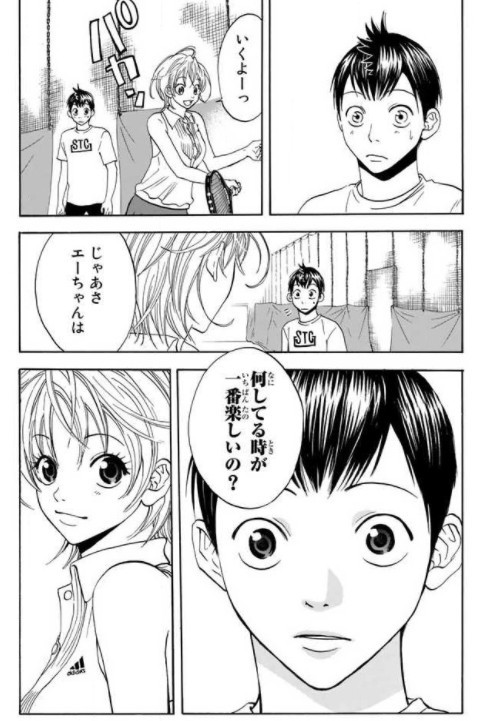 While watching Natsu play tennis, Eiichirou thinks to himself how foolish she is for dedicating her entire life to tennis.
The coach approaches Eiichirou and praises him on working till exhaustion. She introduces the location as the STC junior training academy, a facility that develops tennis players, and tells him that if he ever wanted to play tennis, he was always welcome. 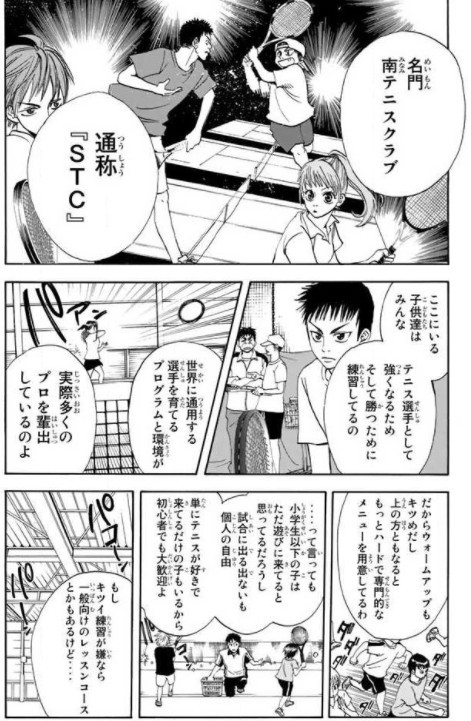 Before leaving, he asks her how he can increase his stamina, to which she replies that running is best at the moment.
While heading home, he stops the bus halfway and decides to run rest of the way home. Despite his best effort, he falls in the middle of the jog and phones his mother to come pick him up. 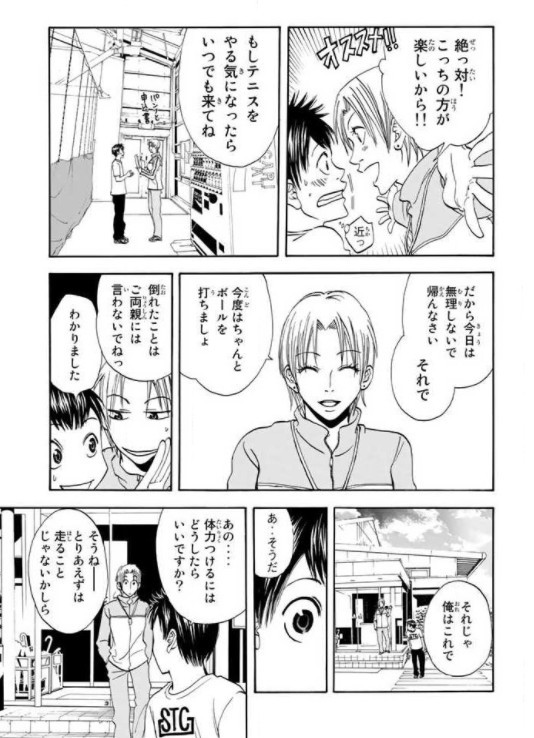