Hello everybody. Speaking of a spy, I would imagine ‘007’. It’s Saori form Manga Republic. 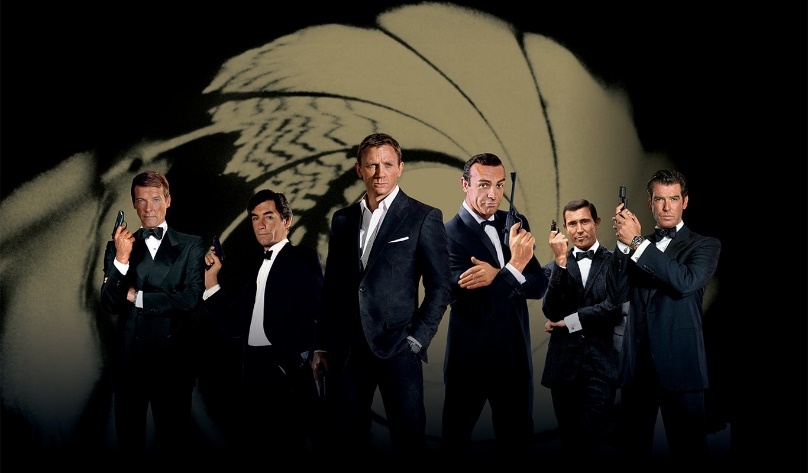 Hello everybody. Speaking of a spy, I would imagine ‘Mission:Impossible’. I’m Manga Republic’s Boss. I like 007 too. Both are great movies, huh? The theme songs are impressive too. 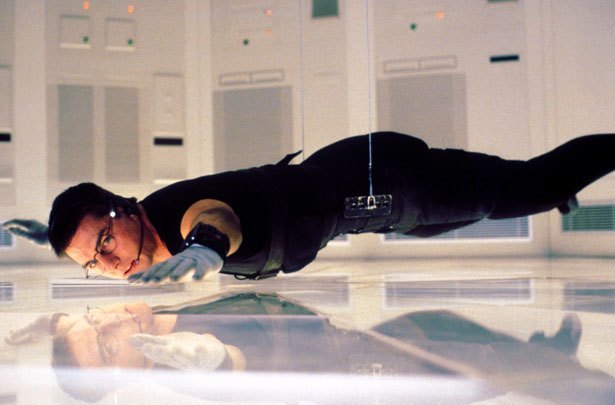 Yep! I bet everybody has the image of being cool for a spy! And today…… we’re featuring a boy manga mixed with three elements,【SPY】,【School】 and【Battle】!

【SPY×School×Battle Action】Welcome to the Spy Training School! A Special Number for You Are Double-O Eight (Kimi wa 008)! 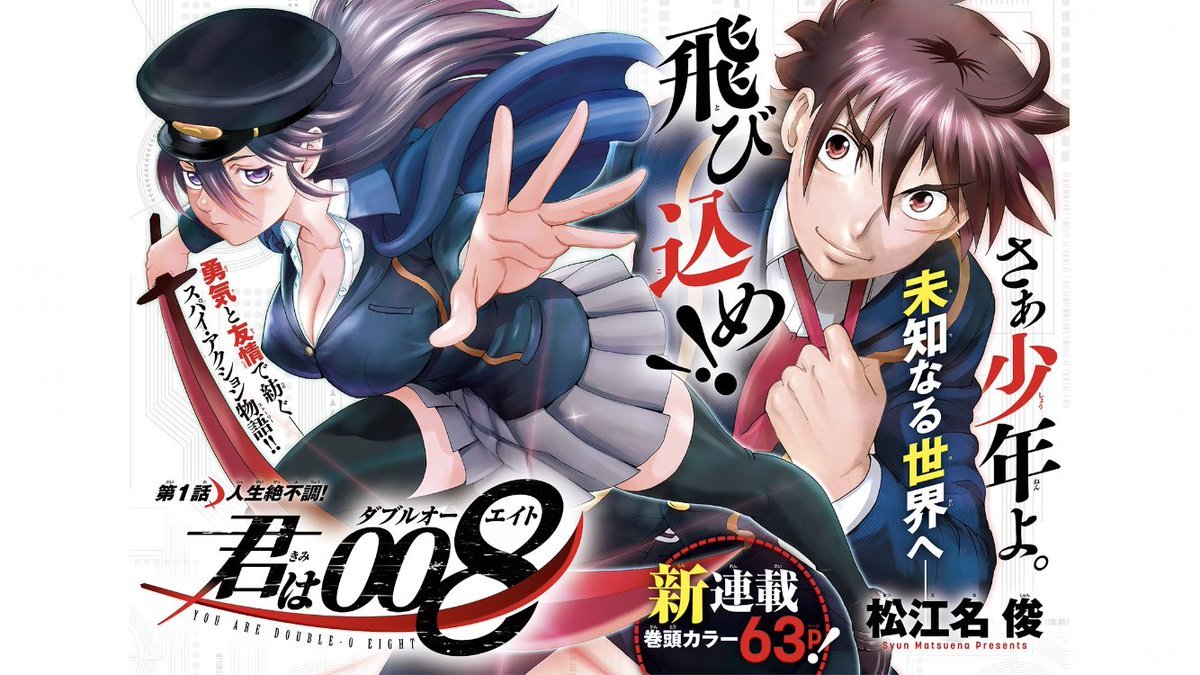 It’s a manga series by a manga artist, Matsuena Shun-Sensei, currently serialized in “Weekly Shonen Sunday”. It has started being serialized since 2018 and nine volumes have been released as of July, 2020.
Matsuena Shun-Sensei has worked on another serialized series called “Shijou Saikyou no Deshi Kenichi” before. One of the characteristics of the title is such a powerful description. That’s why so many fans have been waiting for “You Are Double-O Eight” to be made into anime too. 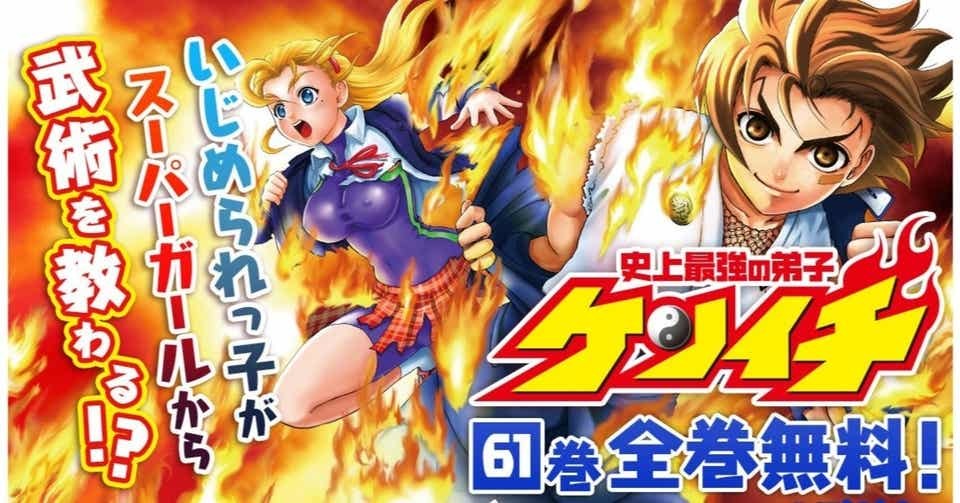 “Shijou Saikyou no Deshi Kenichi”!! Wow, it’s been a while~!! I bet it was already made into anime, no? I didn’t know it had 61 volumes in total…… I think many people know this title. It’s quite famous!

Just like that title, ‘You Are Double-O Eight’ has a unique battle element too! It’s a youth battle manga, where various incidents occurring in the spy training school, are depicted~!! 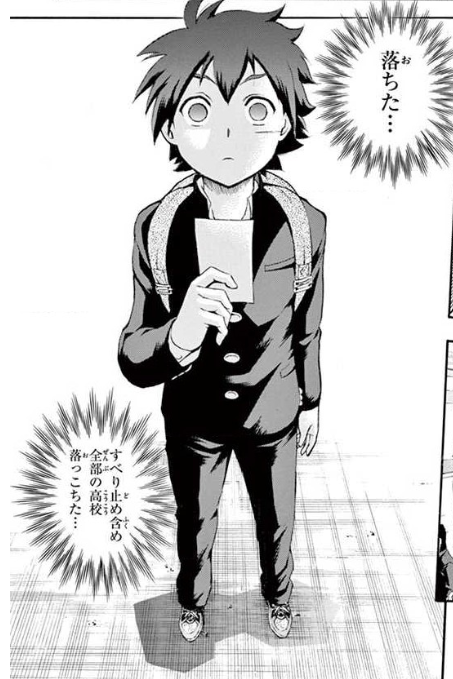 The story beings when the main protagonist, Akashi Eight, has “failed” miserably on all high school admissions exams which he has applied for. He has failed even a low-level high school too. 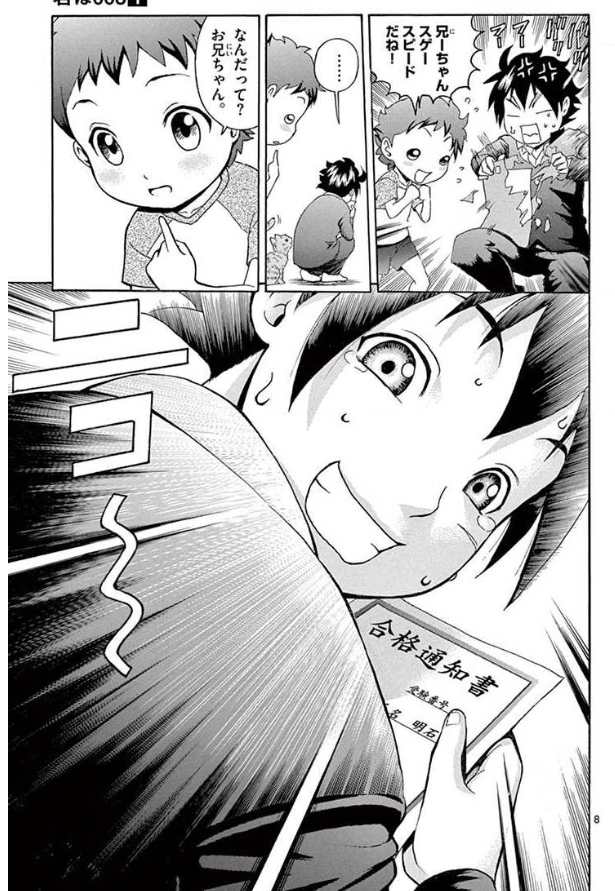 While he feels disappointed, thinking of working somewhere after graduating from middle school, somehow, he receives “a letter of acceptance from a school he doesn’t remember applying for”. He nevertheless happily enrolls, expecting to live the ideal school life, even though he can’t even remember anything about that school……! 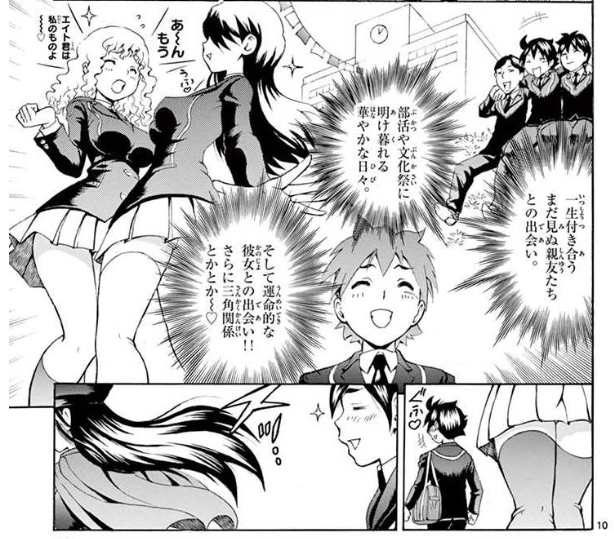 He can’t wait to start the ideal high school life. When he first goes to school, he sees one girl on the way. 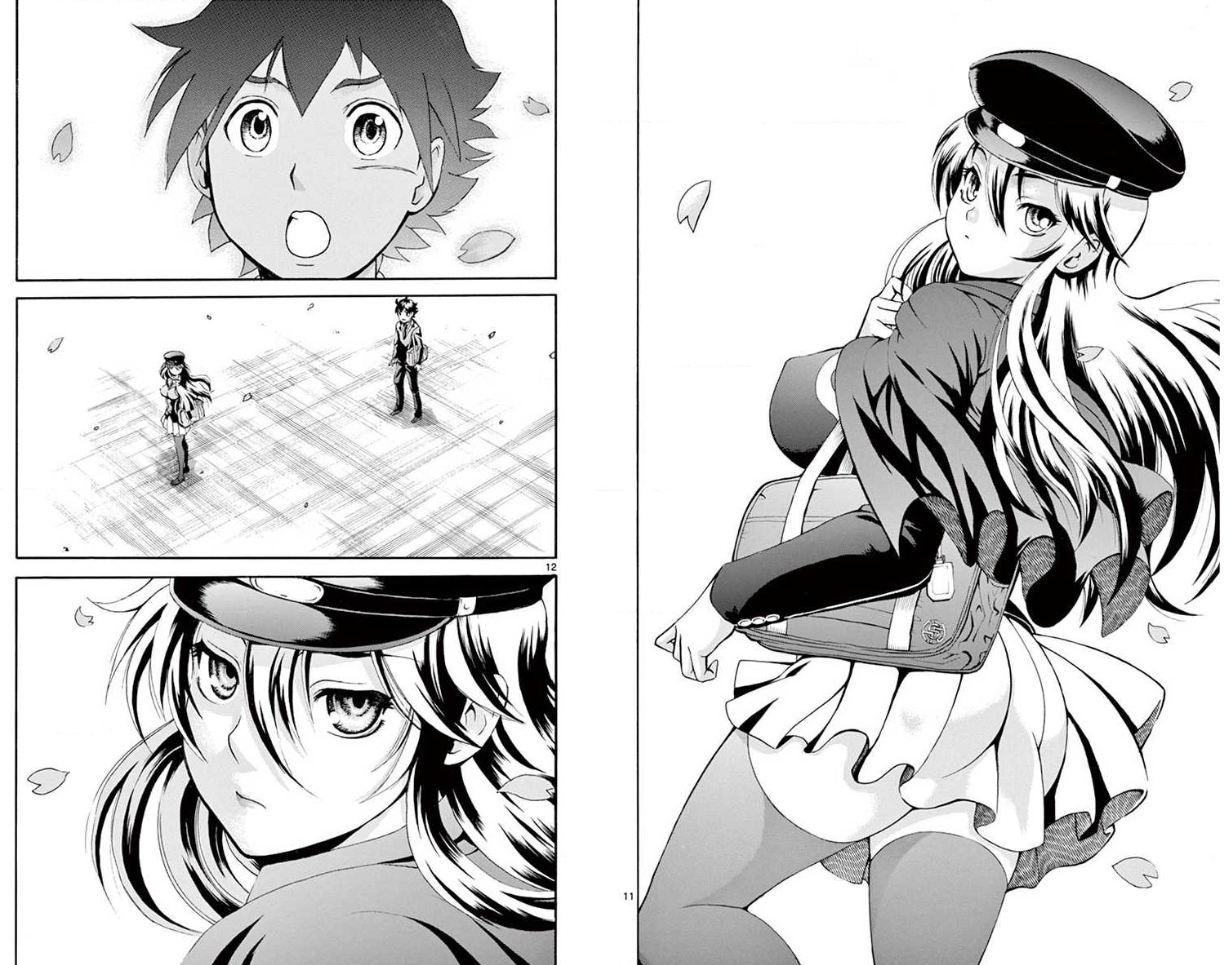 She wears the same uniform as his and Eight is completely glued to her.
She is super cute…… Eight is excited to know if he is in the same class as her……

But when he looks at her closely, the uniform isn’t the designated one. She is wearing a hat, which doesn’t come with the regular uniform and somehow, an owl is on her shoulder…… She looks so mysterious…… While he is wondering why she’s like that, she gets a tangle with a hood.

Eight threatens to the hood, who is trying to take her away. Looking surprised, the hood is trying to hit Eight……!

And it actually happens. Eight is really a pushover.
The girl, realizing that he is a student from her high school, tells him that they should go to school so they won’t be late for school.
Being igonored, the hood is about to hit the girl, when…… 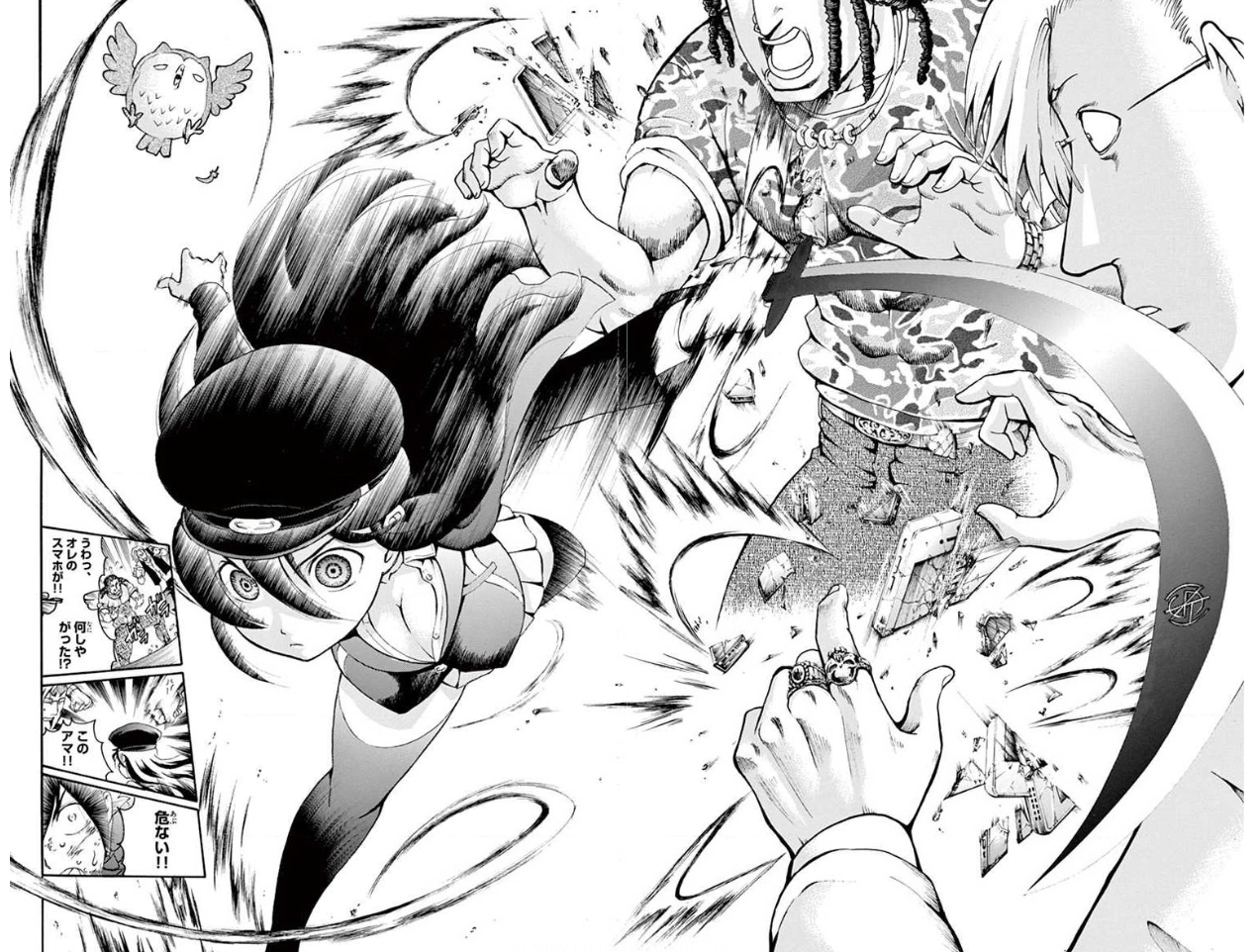 The girl beats the hood so easily.
Clearly, she is not a normal girl. While thinking that, he decides to head for school in a hurry before she gives them the last hit.
However, the entrance of the school he sees is somehow hidden behind the vending machine. And he has to ride the mysterious gondola to get there……!?

Weird…… this girl is weird and the school he should be attending is “weird” too……!!
What kind of high school is it?? Eight is now at a loss…… when the girl, Kido Ayame, calmly says to him. 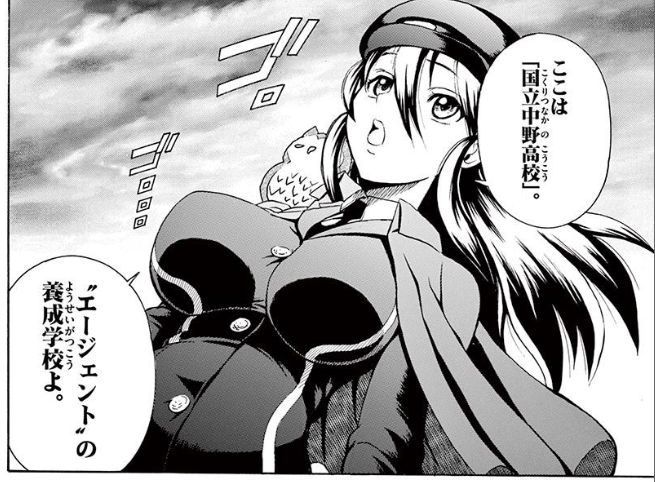 “This is the National Nakano High School. It’s a training institution for secret agents.”

Wow! Agents, huh?? So that means it’s a spy training school! The first day when they have the entrance ceremony is already spy-like scene…… Maybe this girl is a pro-spy? The battle scene was awesome too, full of descriptions of each movement in the facing page!

Yeah…… this kind of powerful description always attracts us, huh?? In Season 1, you will know why Eight ended up attending to school so if you want to know more about this story, go check Vol.1 of its comics!
Check HERE for You Are Double-O Eight (Kimi wa 008)! 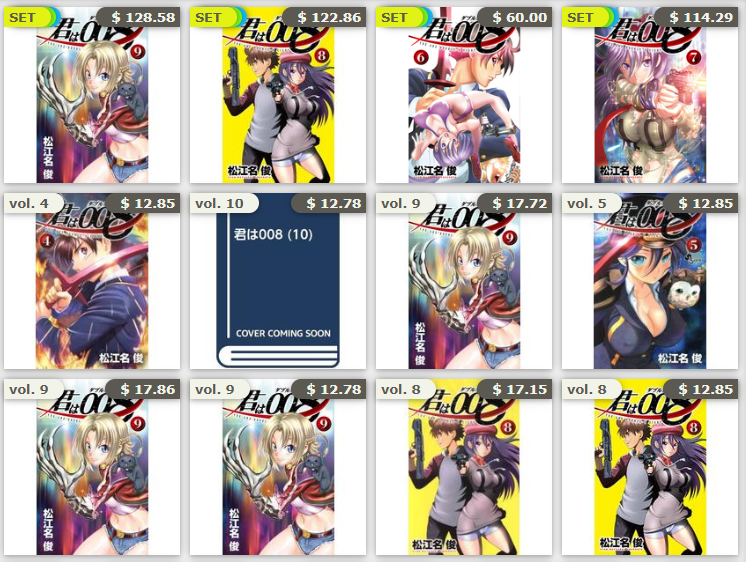 Already now! We’ll see you all at the next article! Bye-bye~!!
Shijou Saikyou no Deshi Kenichi, You Are Double-O Eight (Kimi wa 008)