What is Yawara! about? 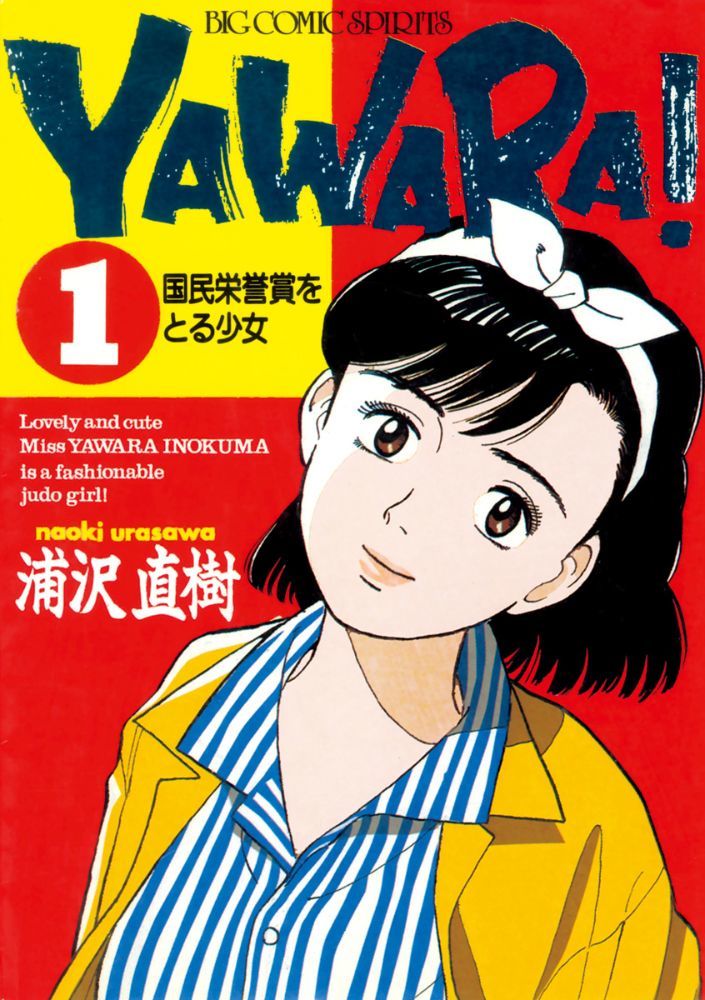 Yawara! is a sports manga series written and illustrated by Naoki Urasawa. It was serialized in Big Comic Spirits by Shogakukan from 1986 to 1993, with a total of 29 volumes. In 1990, the series won the 35th Shogakukan Manga Award for general manga.
The story mainly revolves around Yawara Inokuma – a young girl with great talent for judo but struggles to pursue her dream of a normal life. Urasawa started Yawara! in 1986 when women’s judo was set to be a fully competitive sport at the 1992 Summer Olympics in Barcelona. Thus, the author incorporated this goal into the manga and would eventually see the awarding of the first Olympics gold medal for women’s judo. Japanese female judoka (a judo practitioner) Ryoko Tamura went on to win a silver medal for judo at the 1992 Barcelona Olympics and was promptly nicknamed “Yawara-chan” due to the striking resemblance between Tamura and hugely popular fictional character Yawara Inokuma.
From October 1989 to September 1992, Yawara! was adapted into an anime TV series titled “Yawara! A Fashionable Judo Girl!” by Kitty Films and Madhouse. The series was broadcasted on Yomiuri TV for a total of 124 episodes. Each episode ended with a countdown of days remaining to the start of the 1992 Barcelona Olympics. Two animated films were also created in 1992 and 1996. A live-action film adaptation of Yawara! directed by Kazuo Yoshida, starring Yui Asaka as the main character, was released by Toho in April 1989.
Yawara!
▸

The Rising Star of Women’s Judo!

Kosaku Matsuda was a reporter working for a sports paper and he was looking for a hot news story at the beginning of Yawara! The accompanied camera-man pointed him to an interesting scene of a purse snatcher running away and was about to hit a young girl on his way. 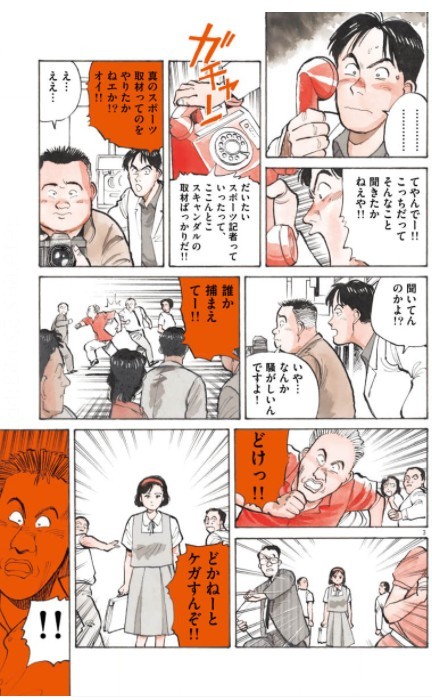 Instead, the seemingly frail girl counter-attacked with a swift judo move and ran away, leaving an unconscious thief on the road. 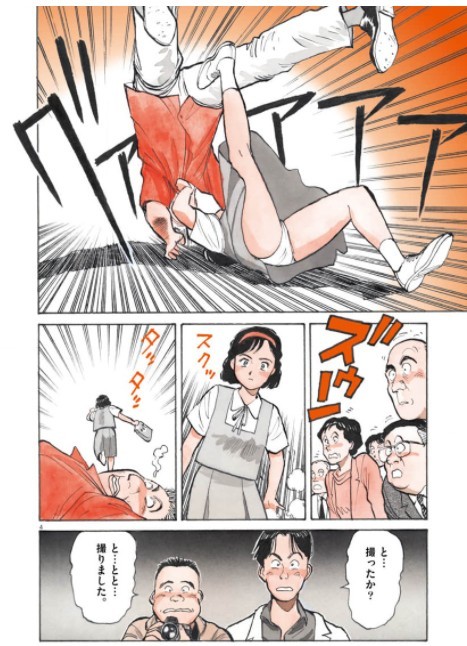 Matsuda and his camera-man was only able to capture the scene where the girl tackled the thief but not her face. At the head office of Matsuda’s paper – the News Sports Daily, his boss asked Matsuda to stop writing about the girl but focus on her panties that got captured on camera instead.
Matsuda expressed his opposition and said that this girl may become a judo’s world champion and put Japan on the map. The only problem was that they didn’t know her real identity. 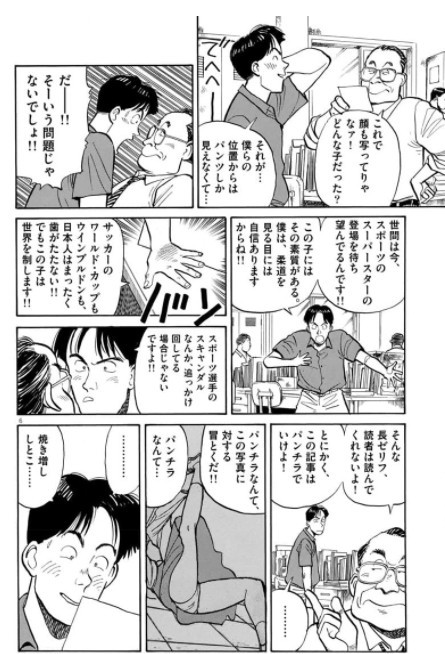 At the Inokuma family’s dojo, Jigoro Inokuma – a five-time national champion judo master was secretly training his granddaughter. Jigoro had an intense passion for the sports and wanted his granddaughter to become Japan’s next judo star.
However, he wanted to keep the innate talent in judo of his granddaughter Yawara Inokuma a secret, only to reveal to the world at the upcoming 1992 Barcelona Olympics. Women’s judo would become an official event and Yawara would be awarded the national medal of honor for wining the gold medal.
Jigoro scolded Yawara for letting her tackle move got captured on the newspaper. She retaliated and said that it was not her dream to win an Olympics gold medal. “I just want to be a normal girl”, Yawara said before leaving the dojo. 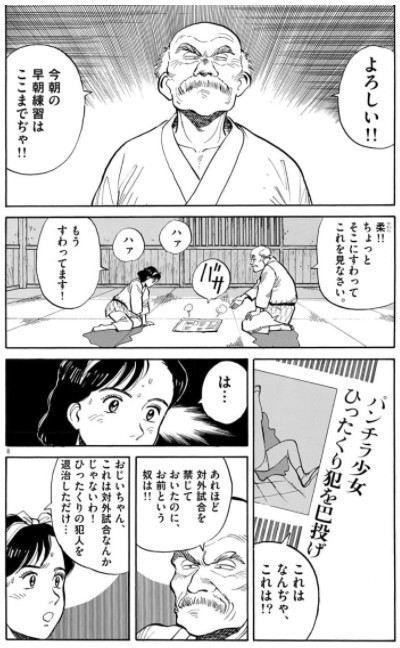 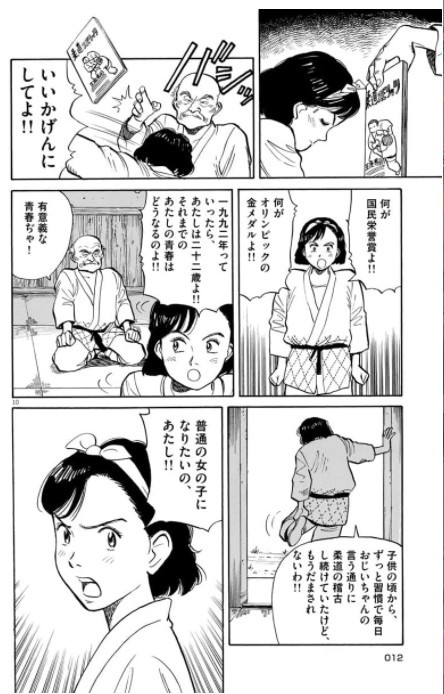 At Yawara’s school, the boys in her class were trying to find the girl featured in the newspaper. Based on the school uniform, they were sure it was one of the girls in class. At the same time, Matsuda and his camera-man was also looking for the girl. The suspicion quickly fell onto Yawara due to her connection with the judo master Jigoro Inokuma. 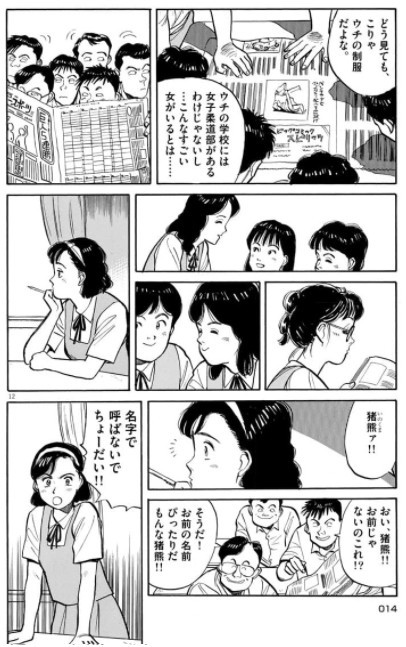 Matsuda came to the Inokuma family’s dojo and asked Jigoro to show them the inside of the dojo. However, Jigoro denied all the suspicion and showed the reporters a dojo floor filled with toy car race tracks. He said that he already retired long ago and left his judo days behind. 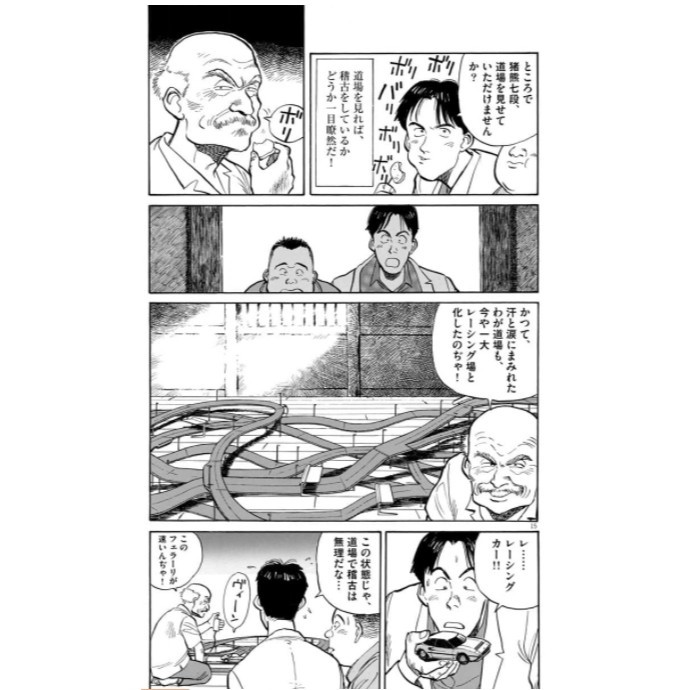 After the reporters had left, Jigoro pulled the fake floor up and revealed the real dojo floor underneath. He was determined to make Yawara’s debut into the dojo world a grand entrance. 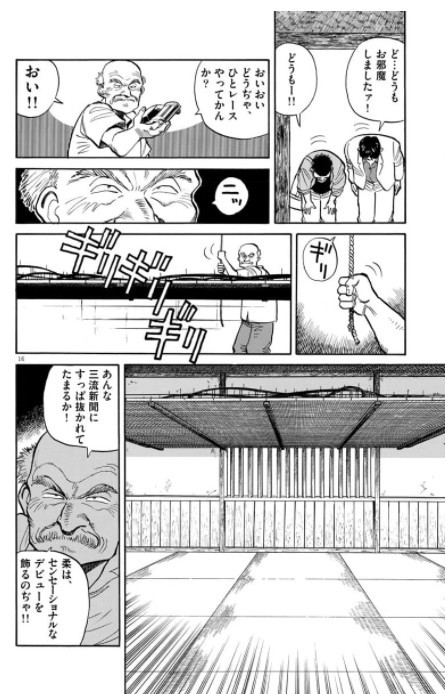 Outside Yawara’s school, Matsuda was waiting for her and followed her on the way home. He was convinced that Jigoro was hiding something. At that moment, Yawara spotted a couple of girls from her school being forced by a bunch of bad guys. Remembering her grandfather’s words, Yawara wanted to walk away.
Matsuda stepped in to help the girls but got beaten up badly. He shouted to Yawara for help and said that “How can you ignore this? Is this the judo that you have learned?”. 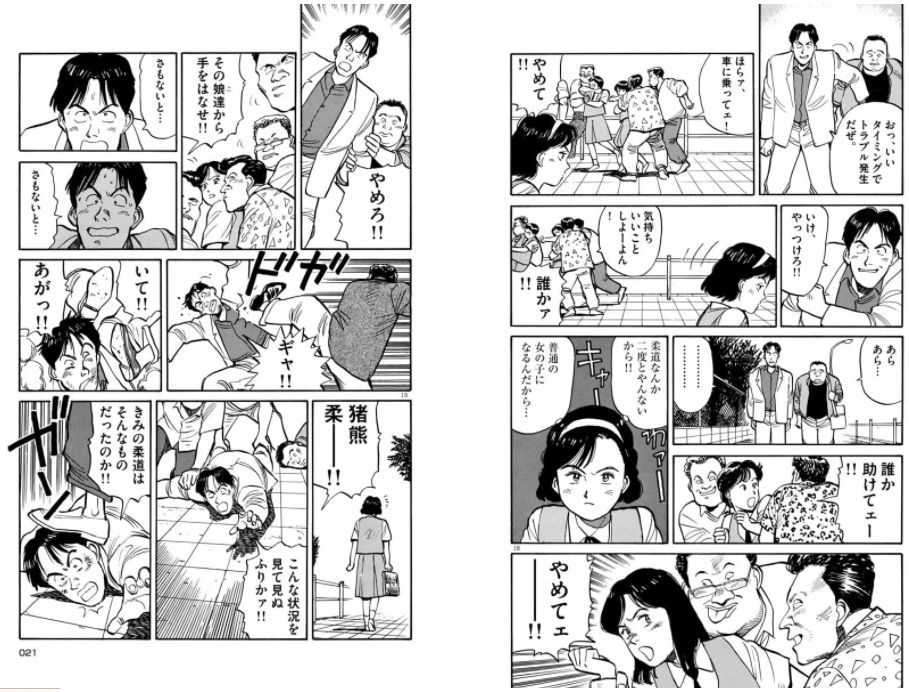 As Matsuda was about to faint, Yawara turned back and started to use judo moves to throw the bad guys on the ground. Before Matsuda completely lost his consciousness, he was able to witness Yawara’s moves and knew that other people would also soon bear witness to her talent. 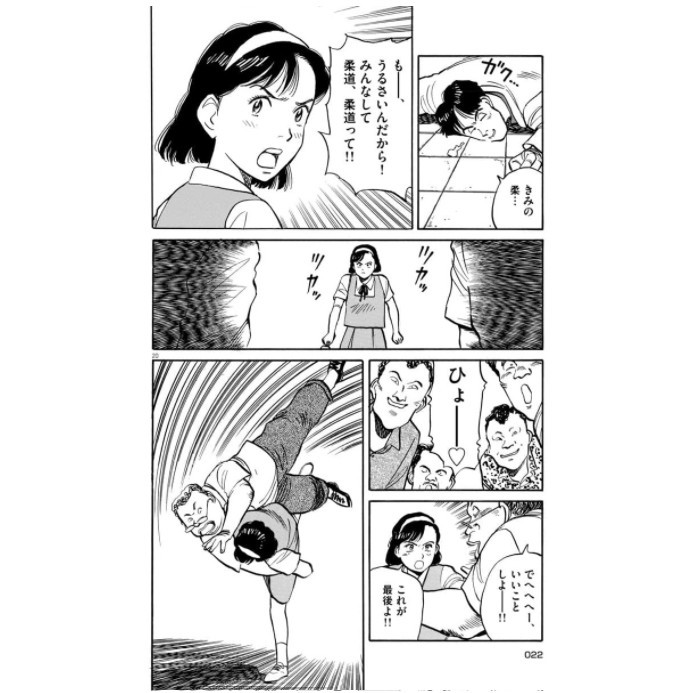 Back at home, Yawara hid in her room and slowly grew frustrated towards the sport of judo. She just wanted to enjoy her youth and eventually find love. As Yawara glanced to the wall of her room, the music band posters had all been replaced with posters of judo masters by her grandfather. 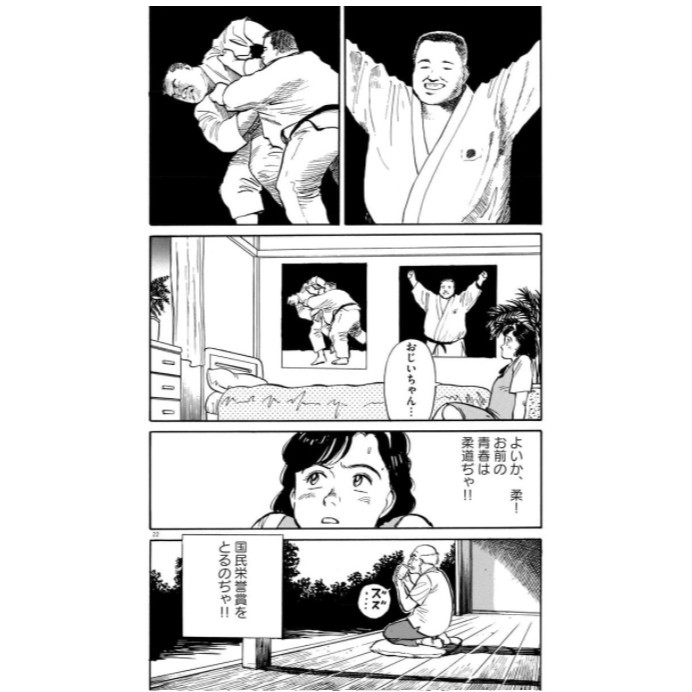 Read on to find out how will Yawara manage to find a balance between judo and a school girl’s normal life......
Yawara!
▸
Urasawa Naoki, Yawara!