What is Imawa no Kuni no Arisu about? 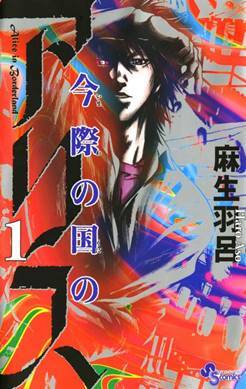 Imawa no Kuni no Arisu (Alice in Borderland) is a survival manga series written and illustrated by Haro Aso. The manga was serialized in Shonen Sunday S (formerly known as Shonen Sunday Super) by Shogakukan, from November 2010 to March 2015. It was later moved to Weekly Shonen Sunday in April 2015 and completed in March 2016, with a total of 18 volumes.
As of March 2016, Alice in Borderland had 1.3 million copies in circulation. It has inspired several spin-off series and direct sequel, including King of Diamonds (October 2014 – February 2015), Alice on Border Road (August 2015 – February 2018) and Alice in Borderland: Retry (October 2020 – January 2021).
Alice in Borderland was adapted into a 3-episode OVA, which were released from October 2014 to February 2015. Following the huge success of the original manga and its OVA, a live-action series, produced by Netflix and directed by Shinsuke Sato, premiered worldwide in December 2020. Alice in Borderland (TV series) consists of 8 episodes and stars Kento Yamazaki as Ryohei Arisu and Tao Tsuchiya as Yuzuha Usagi. On December 24, 2020, a second season was announced. 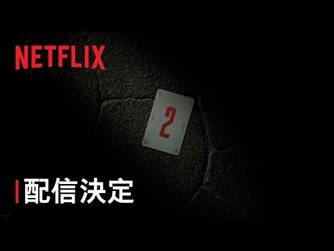 The main protagonist of the story – Ryohei Arisu, has always wanted to escape from his boring daily life. Nothing seemed to spark Arisu’s interest, not school, his future nor his own dream. He just wanted to play video games and read adult magazines instead.
Arisu would often ponder about his life and realized that he wasn’t meant to be the main character but rather just “commoner A”. After taking the National mock exams, Arisu was lazing round in the school yard with his friend Chota Segawa. Arisu and Chota talked about a boring and not-so-bright future awaiting losers like them. 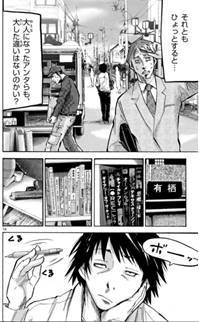 At home, Arisu was drifting off when his younger brother suddenly walked in. He immediately tried to act like he was studying, to little success. Arisu’s brother said that their father wanted to see Arisu and talk about his future but Arisu ignored. His brother then brag about his grades and how he was top of the school again. 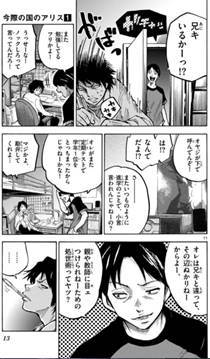 Getting more and more frustrated, Arisu called his friend and head over to his bar. Daikichi Karube was Arisu and Chota’s friends when they all attended the same primary school. However, Karube quitted school and became a bar owner at a young age. Arisu came to the bar only to find Chota already there, totally drunk. 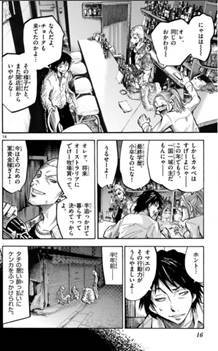 After talking for a while, Arisu recalled how he and Chota became friends with Karube. Back in high school, Arisu and Chota got into a fight with some drunkards and lost in the ugly brawl. They were even threatened to give the thugs money every time they would meet. Lucky for them, Karube came by and recognized his old classmates. He easily beat the thugs and chased them away. Their conversation continued, and Karube warned Arisu that he should start considering his future and become more responsible. Arisu then replied by making up apocalyptic scenarios and promising that he would become more responsible if any of those events happen.
The discussion of possible apocalyptic scenarios continued into the night as the three of them was walking to Shibuya. When they were taking a break at the train station, Arisu wished that he could go to some foreign country to start anew. That was when they saw fireworks even though it was 4 in the morning. 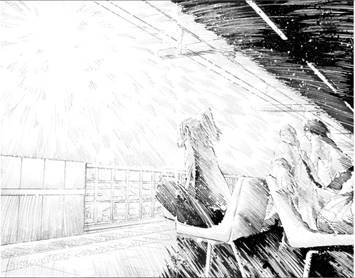 The strange fireworks started becoming larger and then caused a giant explosion that could be seen even from space. 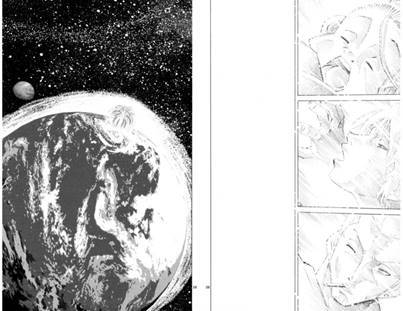 After a lapse of time, the three of them woke up in a whole new world. Everything were covered in a thick layer of dust and they realized this place wasn’t Tokyo from last night.
The buildings surrounding them were in ruin and weed sprouted up everywhere. Thinking that this was only a dream, Arisu and Chota decided to have some fun. They went around to find food in convenient stores, played bowling and drank alcohol. Except for Karube, he seemed oddly cautious and believed that there was something very wrong. 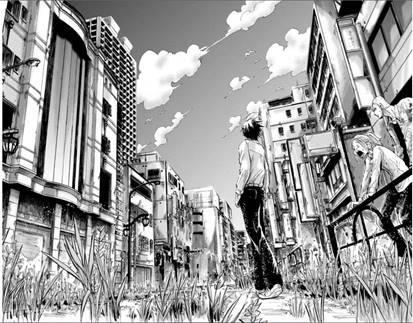 As the night fell, the three of them heard some sounds and turned back to see a festival from the distance. Upon entering the festival ground, they saw a lot of stalls filled with toys, food and masks. Arisu and Chota began to have fun but Karube still refused to join. 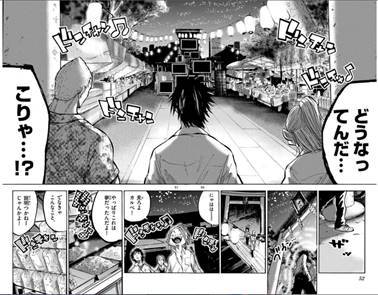 That was when they heard a toilet flushing from the nearby women restroom. A woman then walked out, muttering reproachfully. She looked at the trio and said that she was “paired up with a bunch of high schoolers”. Chota still thought of this as a dream and ask the woman to come play with him. Hearing that, she realized that they knew nothing about what was about to come. She asked if this is their first day in this country. 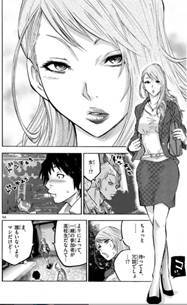 Karube seemed shock by the question and called out for his friends to leave. Right when he was about to cross the gate of the festival ground, the woman stopped him. She said that it was too late since they were already a part of the “Game”. To demonstrate, the woman tossed a stick out the gate and it was instantly zapped by a laser. She then proceeded to tell them that if they continue to assume this is a dream, they would lose their lives. Suddenly, giant computer screens lighted up, signifying the start of the “Game”. 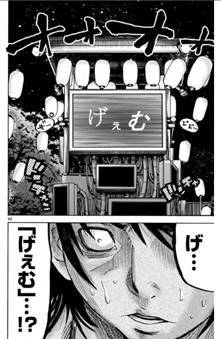