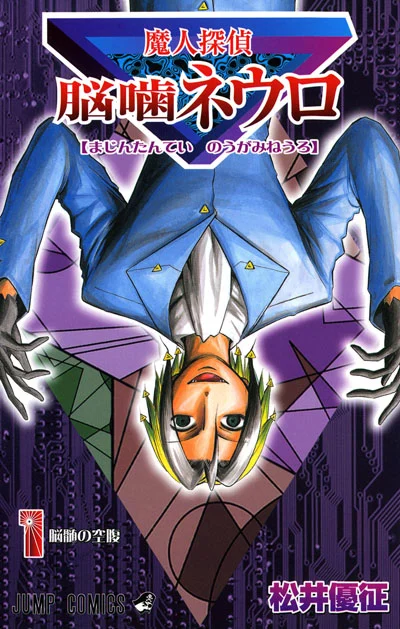 Majin Tantei Nogami Neuro (officially translated as “Neuro: Supernatural Detective”) is a manga series written and illustrated by Yusei Matsui.
The manga was serialized in Weekly Shonen Jump by Shueisha from February 2005 to April 2009, with a total of 23 volumes. The author Yusei Matsui considered Neuro: Supernatural Detective as an orthodox detective manga, which was different than other famous detective series like “Detective Conan” or “The Kindaichi Case Files”. Matsui also admitted that he was not comfortable with drawing humans or real life things, thus supernatural theme became a major aspect of his work.
As of 2009, the manga had sold over 4 million volumes in Japan and reached a new height of popularity. Neuro: Supernatural Detective was also frequently ranked in the weekly Top Ten list of best-selling manga.
It was adapted into a 25-episode anime TV series by Madhouse and broadcasted on Nippon Television from October 2007 to March 2008.Aside from anime adaptation, the original manga also inspired a light novel titled “Majin Tantei Nogami Neuro: Sekai no Hate ni wa Cho ga Mau”; two audio dramas; two video games on Nintendo DS and Playstation 2; and several other merchandises.
Majin Tantei Nougami Neuro
▸

A Detective from Hell!

The story of Neuro: Supernatural Detective started with a dramatic entrance of the main protagonist Neuro Nogami.
He was a demon who consumed a type of negative energy in the form of mysteries. At the beginning of the series, Neuro had grown bored and exhausted the Demon World of its mysteries supply, thus he turned to the Human World.
Or as Neuro called it, the “above ground”.
Neuro took on his human form, from his true form as a demonic bird resembling a giant toucan, and travelled to the Human World. 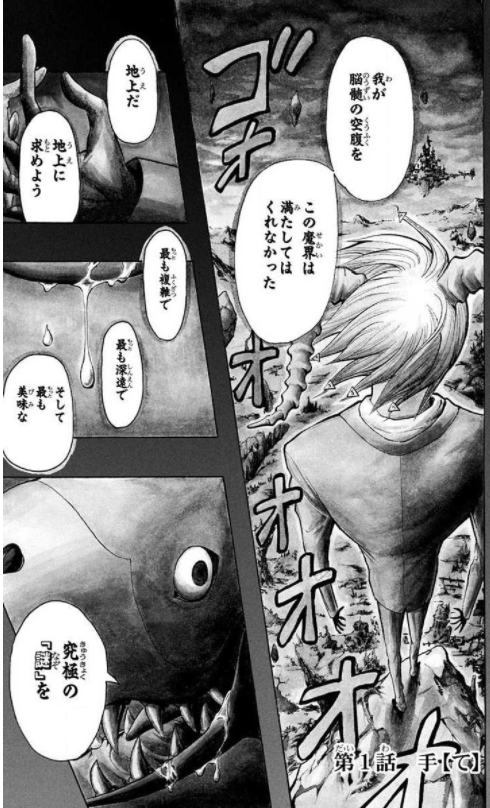 In the human world, Yako Katsuragi was seen at the funeral of her murdered father. High school student Yako was young but she got a strong resolve to find the culprit of her father’s murder.
The two detectives in charge of her father’s case greeted Yako at the funeral and said they were conducting an all-out investigation. Just then, the looming shadow of Neuro could be seen nearby as he finally found a mystery worth eating. 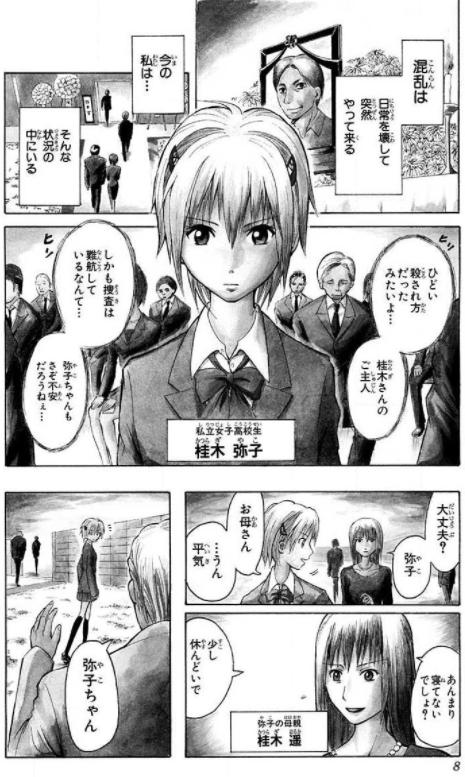 Later on, as Yako was crying in front of the family altar where her father’s photo was placed, Neuro made a sudden appearance. 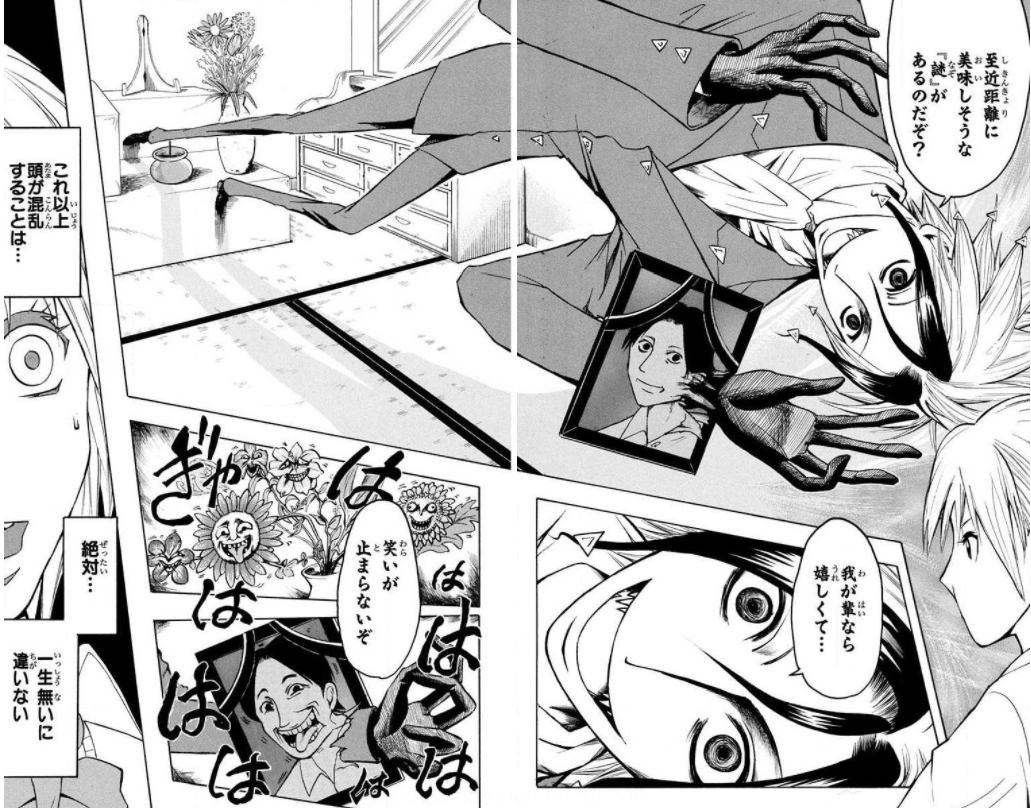 Neuro introduced himself as a mind-eating demon and asked Yako to act as a detective in his stead so he could avoid attracting too much attention in the human world.
Neuro revealed his demonic form to Yako and easily scared her into following him. Neuro wanted to show Yako what he meant and teach her “how delicious mysteries are”. 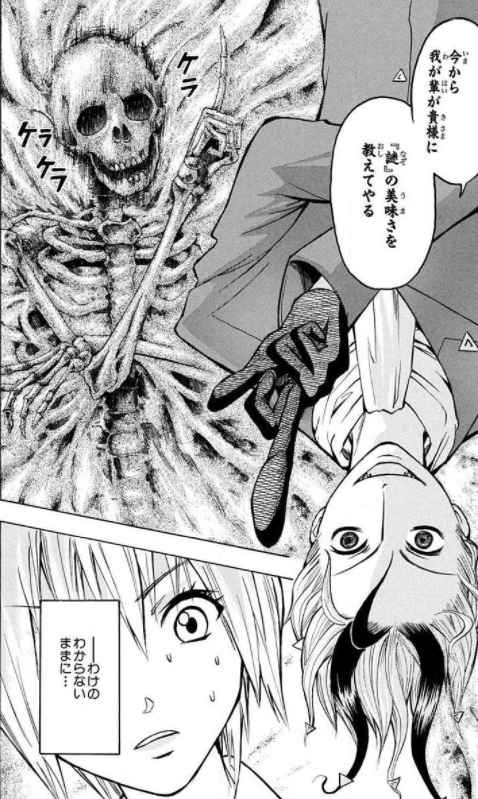 Both of them went to a café where Neuro said that a murder were about to occur.
Right when he finished speaking, the man sitting in the booth behind them spurted out blood and fell face-first onto the table. Another man sitting with the victim stood up and screamed in fear. That was their first case as an unlikely detective duo. 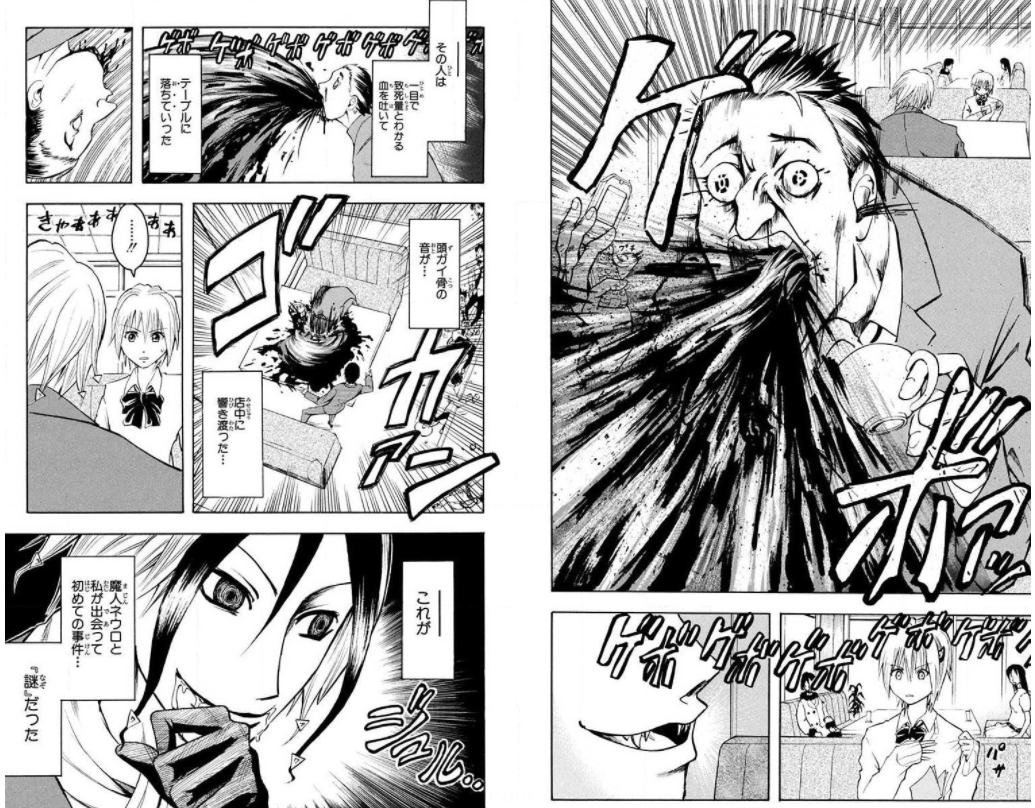 The two detectives from the murder case of Yako’s father appeared on scene and seemed to be investigating this incident. Neuro promptly introduced himself and told them of Yako’s detective skills and that he would assist her.
In truth, Yako was told to stand and watch while Neuro used one of his demonic tools called “Evil Friday” that he spitted out in form of a large sphere made of eyeballs. The eyeballs then detached and became sentient lifeforms which could function like cameras and serve as Neuro’s extra eyes. 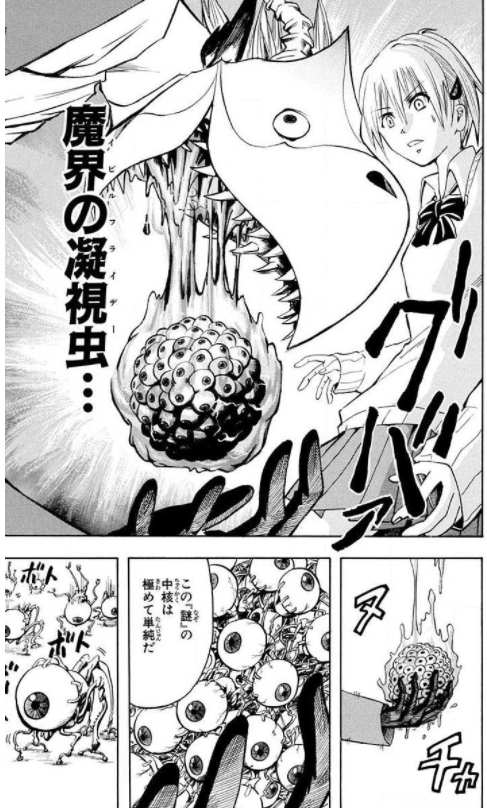 When the detectives came to a hasty conclusion that the culprit was the man sitting with the victim at the time of the murder, Neuro instantly rejected this. He claimed that Yako had found the real murderer.
Neuro then used his eyes looking at Yako to manipulate her into pointing her finger at the murderer. In Neuro’s stead, Yako revealed that the real culprit was a woman sitting closest to the restaurant’s washroom. 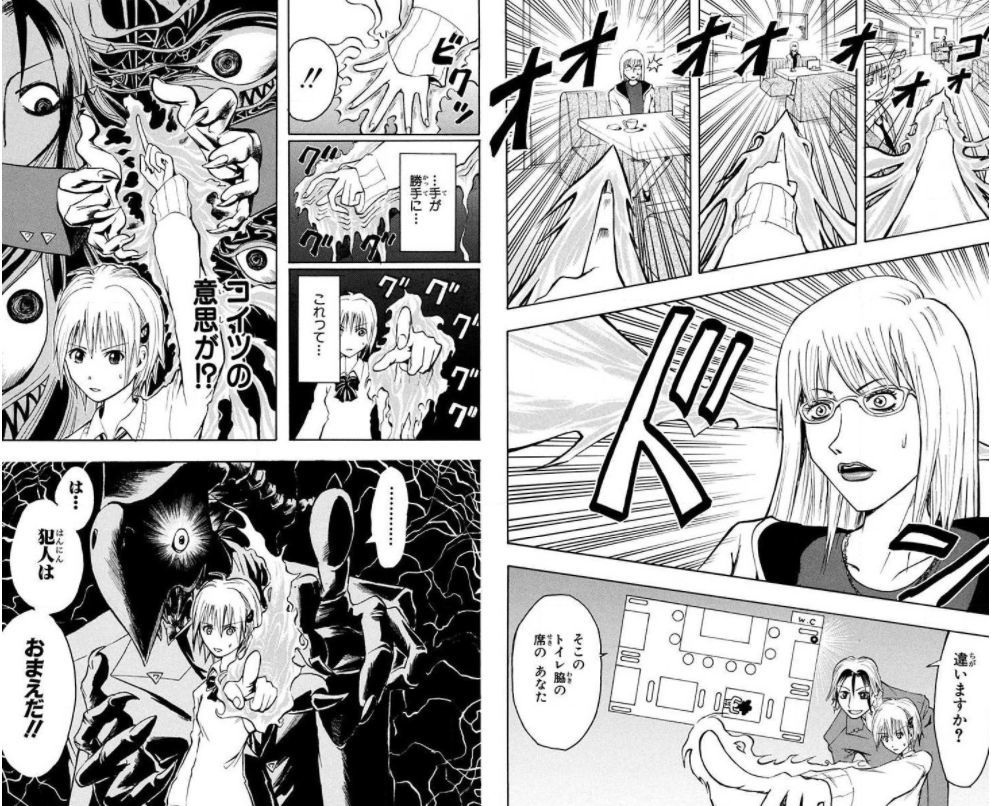 He explained that the woman put poison on the doorknob of the washroom when the victim entered and wiped it off right away when he left the washroom.
After touching the doorknob, the victim used those hands to hold the sandwich and unknowingly smeared poison onto his own food. To further convince everyone, Neuro pointed out that the woman was wearing wigs and fake glasses as disguise and questioned her why she chose a smoking seat but haven’t smoked at all. 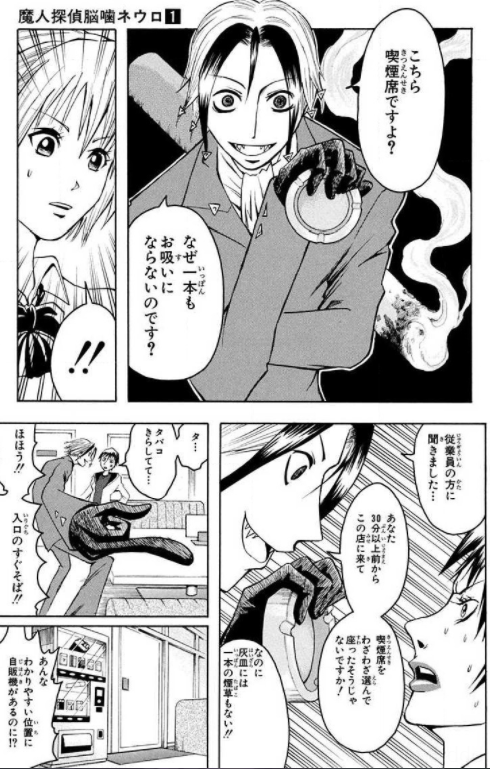 Finally, Neuro found the poison and the cloth she used to wipe off the doorknob in her handbag, thus cemented his deduction. 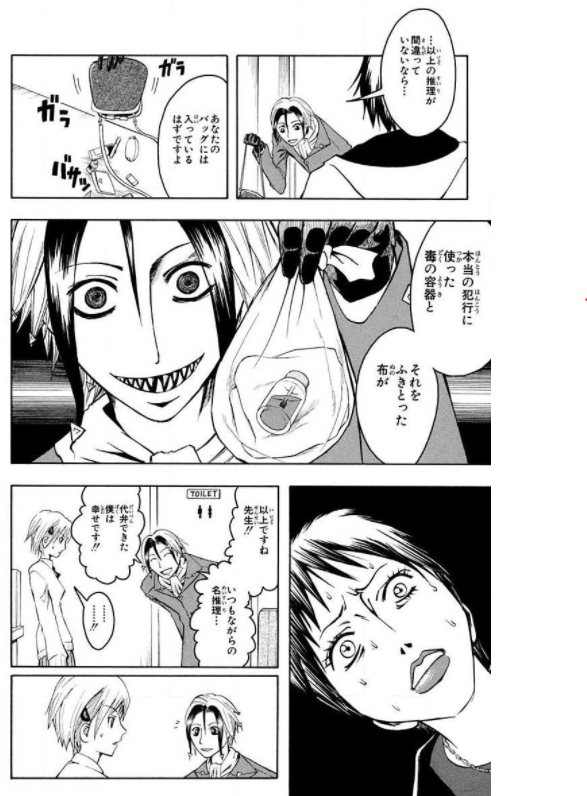 When the murderer fell down on the chair after the case have been solved, some sort of energy started to flow out of her that only Neuro could see. He ate it in an instance.
The woman finally broke down, explaining that she had a relationship with the victim and her life began to crumble when she found out he had a mistress. 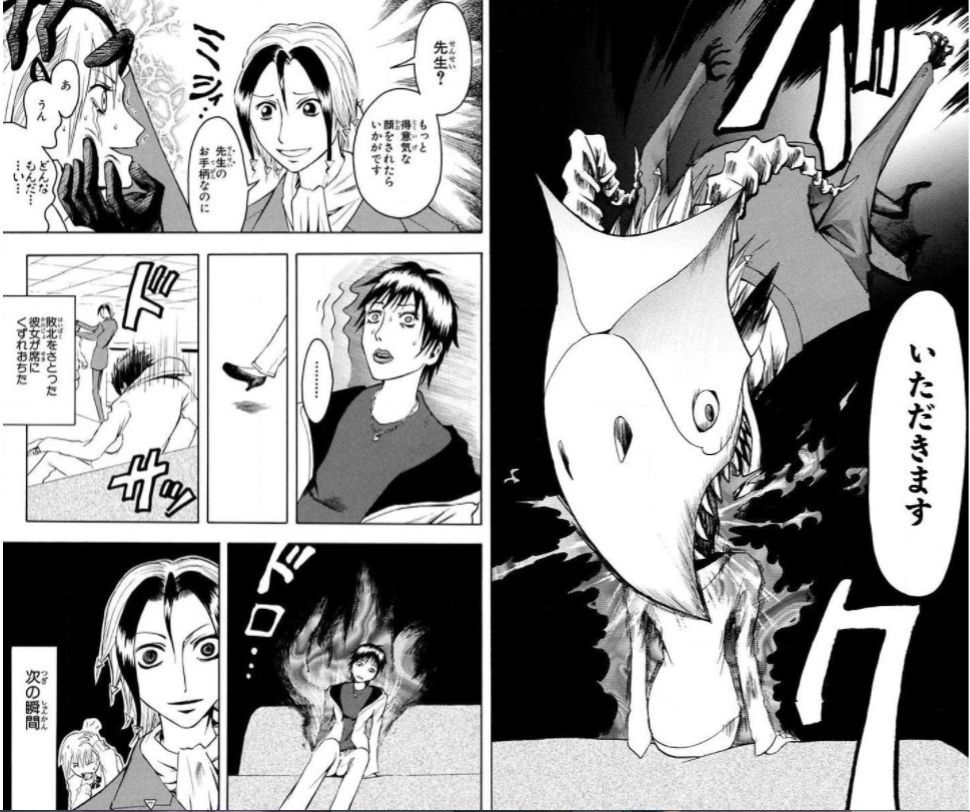 Neuro was rather uninterested after finishing his meal and forced Yako to bring him to her house, where he would hungrily solve the next mystery...... 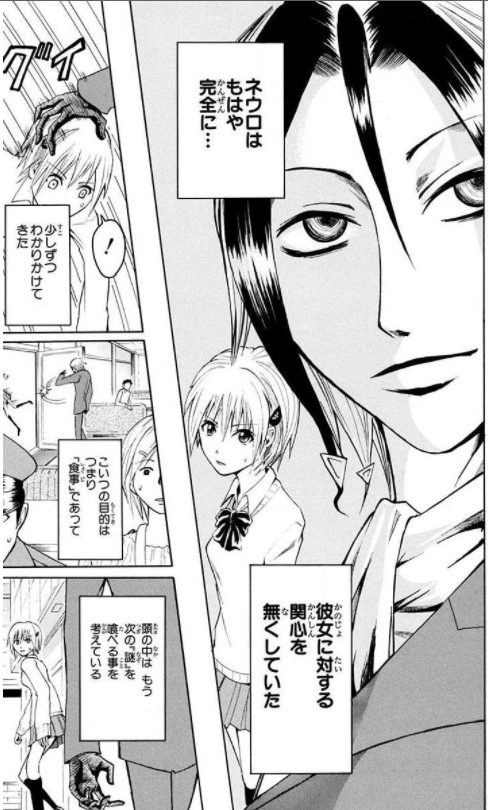