What is COBRA about? 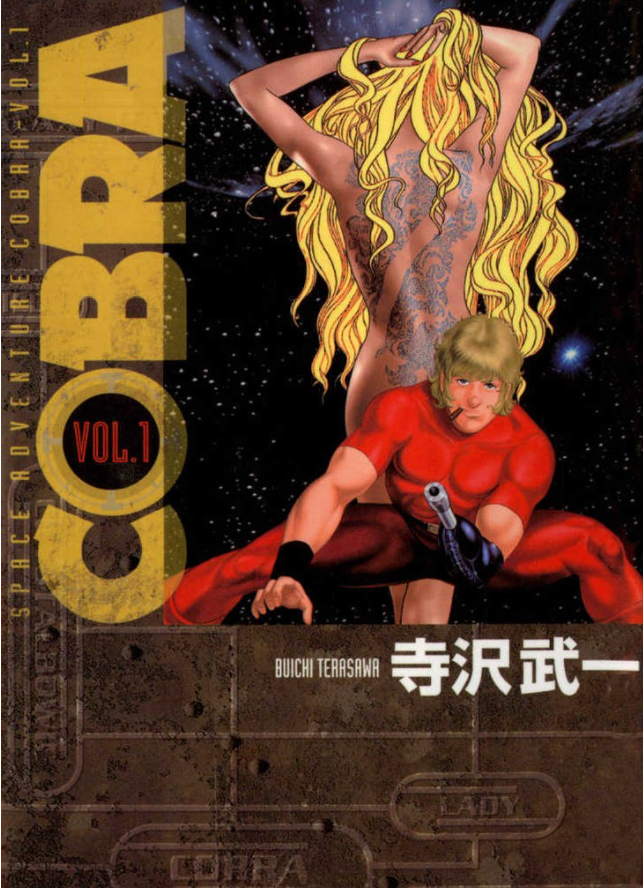 Cobra is a sci-fi manga series written and illustrated by Terasawa Buichi. The manga was originally serialized by Shueisha in their Weekly Shonen Jump magazine from November 1978 to November 1984. The manga was finished and published into 18 volumes.
Cobra is considered one of Weekly Shonen Jump’s best-selling manga series of all time, having sold over 50 million copies across Japan. Following the original manga’s success, various sequel series, anime feature films, television series, video games and other merchandise were spawned.
Set in the distant future, the series follows the story of Cobra – an adventurous man with a devil-may-care attitude. After meddling with the Pirate Guild, Cobra was hunted down by them and had to live his life on the run. Tired of gunning down his enemies, Cobra had his face surgically altered and his own memory erased to hide from his foes and lead a normal life. Eventually, he regained access to the memories of his former life and resumed his adventures alongside former comrades.
COBRA
▸

The revival of Cobra! 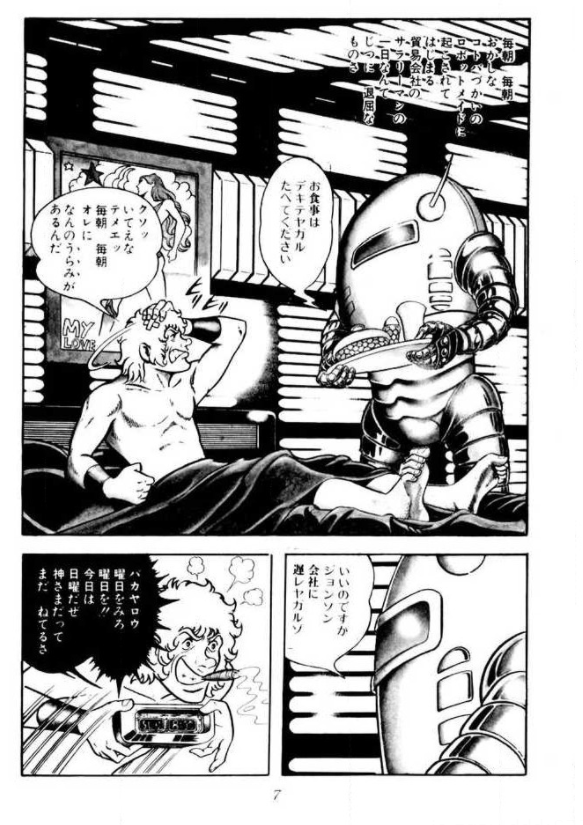 In a distant future, Johnson was an average man who lived alone with his hunk of scrap robot helper – Ben. Johnson worked a low paying job and survived day-by-day on minimum wage. His dream was to have enough money for a sexy robot maid and a ticket to leave his mundane planet. 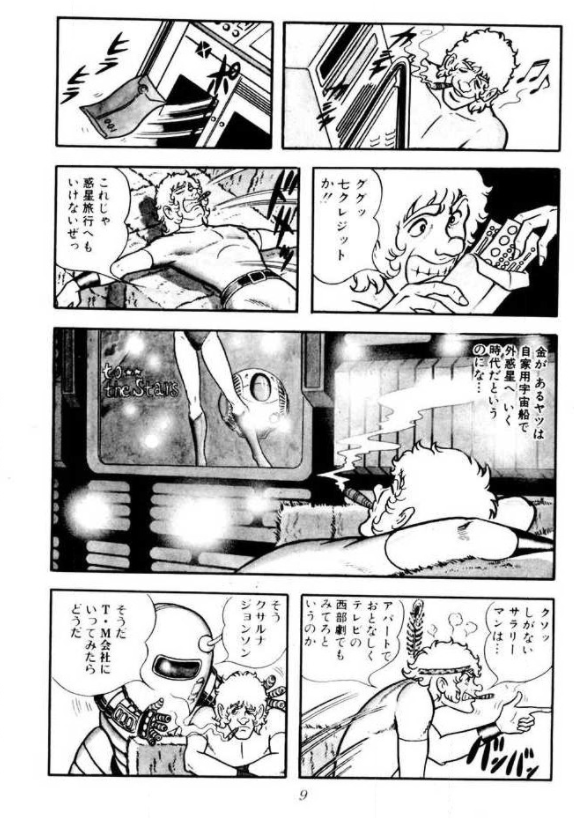 One morning, Ben rudely woke up Johnson for work, not knowing it was a Sunday. He then apologized and suggested that Johnson should go to the Trip Movie Corporation – a company that allowed its customers to experience dreams as though they were a reality. Intrigued by the idea, Johnson decided to try it out for himself. 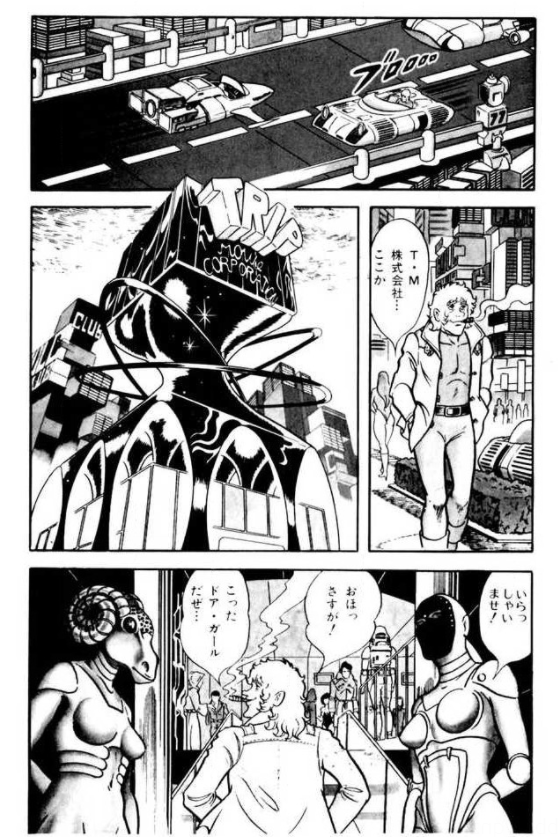 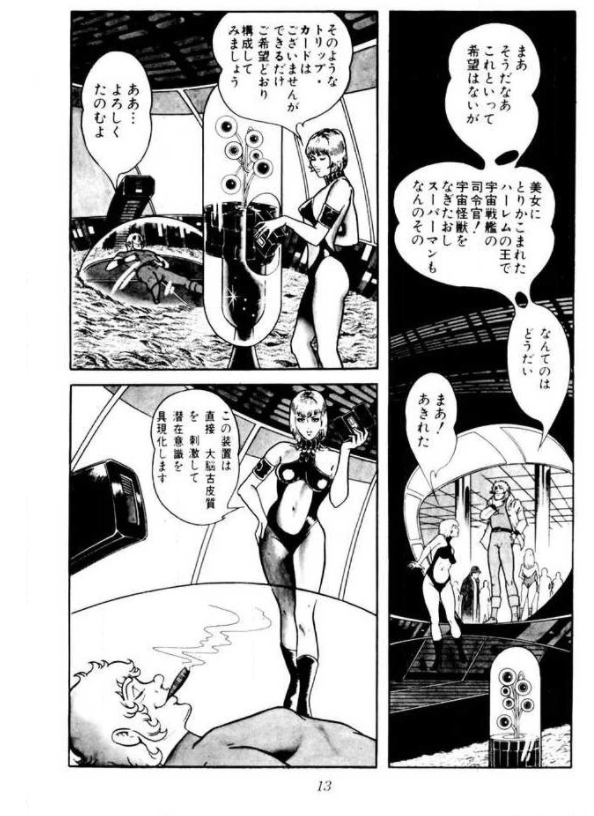 At the Trip Movie Corporation, Johnson asked to be in a dream where he was a spaceship captain that battle against galactic beasts. A man who was surrounded by beautiful women who were madly in love with him. 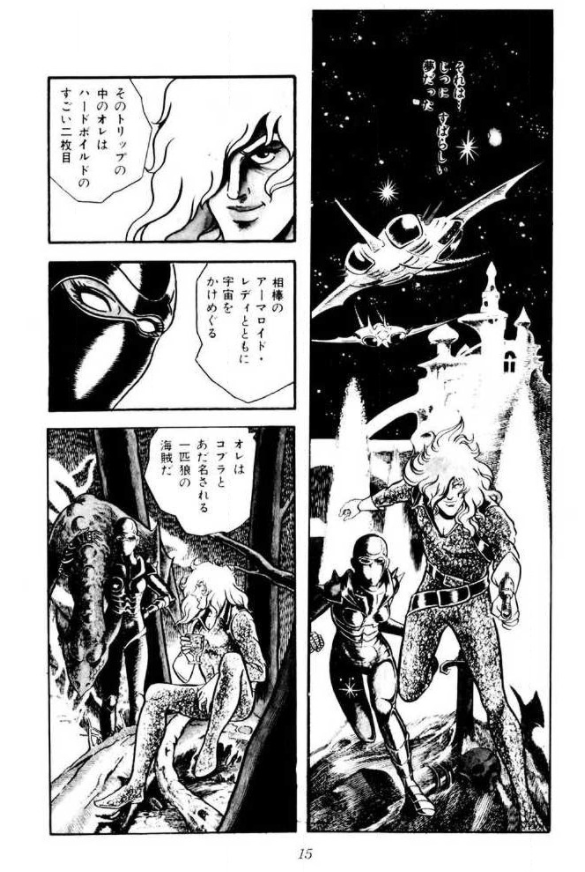 In his dream, Johnson became “Cobra”, an adventurer who explored the galaxy with his partner Lady Armaroid. With his signature weapon – the Psychogun, implanted in his left arm, Cobra battled against the galactic police, pirates and monsters of space. 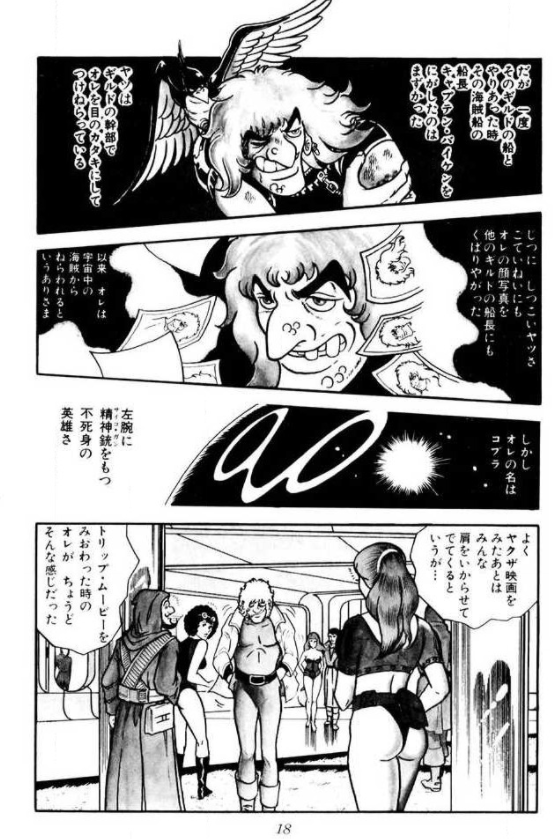 After a fateful battle with the pirate guild, Cobra let one of its leaders named Captain Vaiken escape. Vaiken had been seeking revenge against Cobra ever since. He published a wanted order for Cobra’s head to all of the pirate guild captains. Thanks to that, Cobra had been on the run from every pirate in the universe. 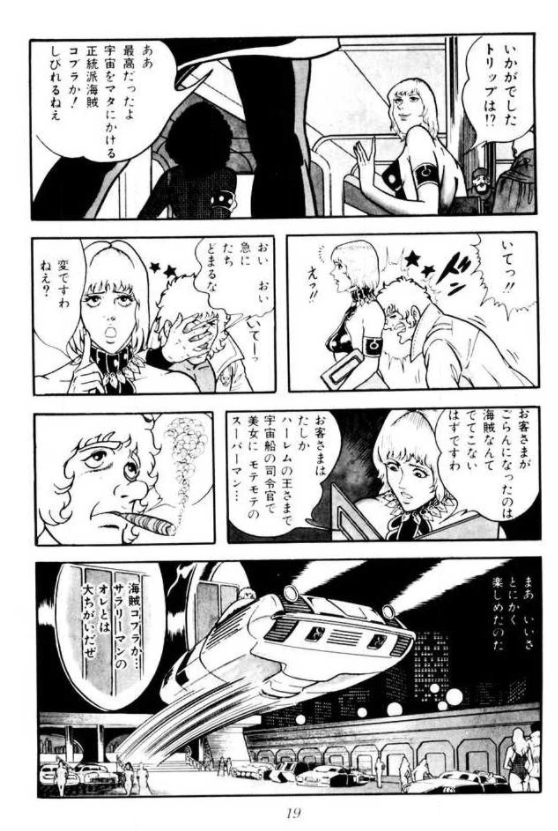 “I am Cobra, the invincible hero with Psychogun in my left arm. I would surely be victorious!”, thinking that, Johnson woke up from his fantastic dream. After the dream ended, Johnson thanked the attendant and described his dream to her. It took her by surprised because Johnson’s dream wasn’t supposed to have any reference to space pirates or Cobra. 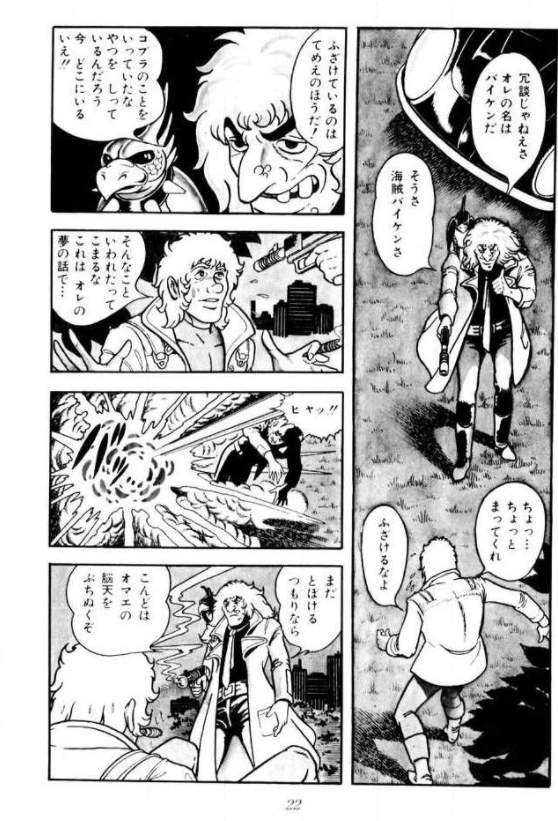 On his way back to the apartment, Johnson crashed into an incoming car. He was lucky to escape and went to check on the other driver. To his surprise, the man looked exactly like Captain Vaiken from his dream. Johnson couldn’t help himself and slipped out a remark about their resemblance. 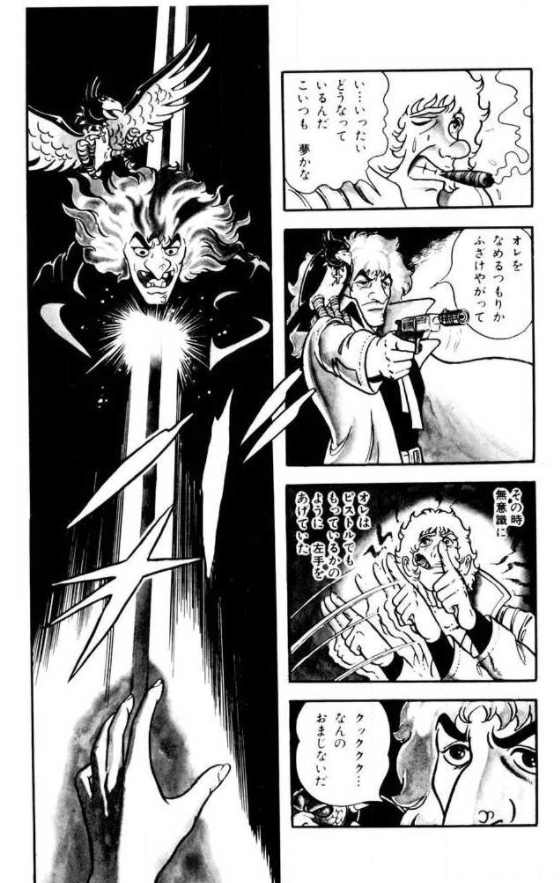 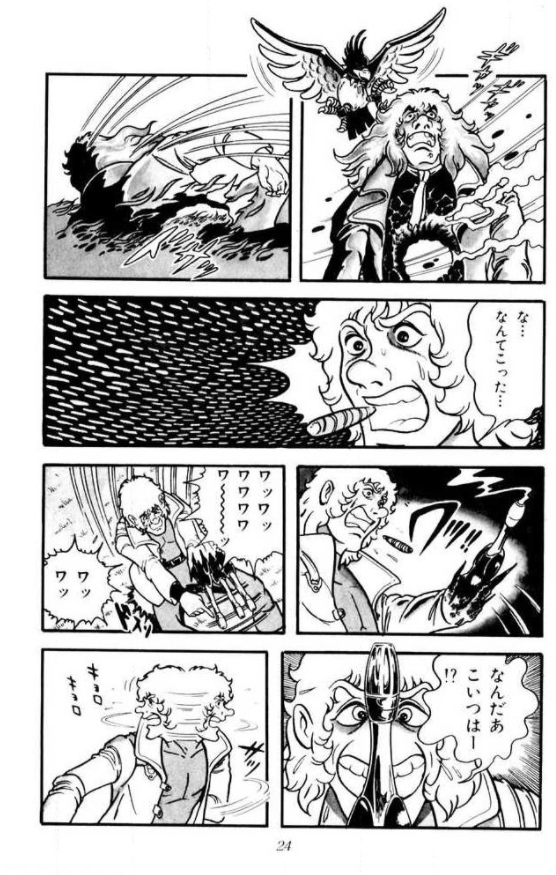 Hearing Johnson mentioned his name and Cobra’s, the man revealed himself to be the real Captain Vaiken. He then threatened to kill Johnson. Johnson unconsciously lifted his arm in defense and a beam of light shot out, killing Vaiken on the spot. When he came back to his senses, Johnson looked at his left arm to see it exploded and revealed the Pyschogun hidden inside. 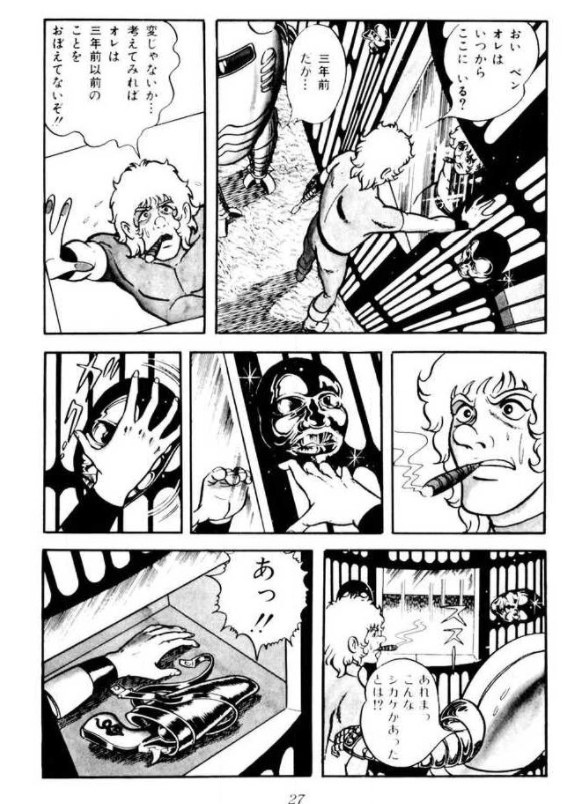 Johnson rushed home to seek shelter and hide his arm. He then started to realize that he had no memory prior to the last three years. Under severe confusion and lost in his own thoughts, Johnson started to fumble around his room and found a hidden switch. A safe opened up, revealing a gun and a spare arm. 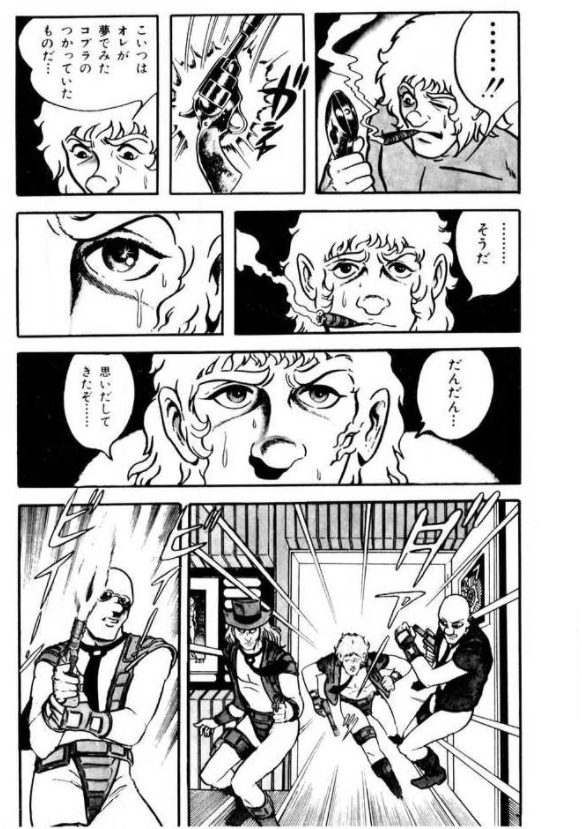 The gun looked just like the one Cobra used in his dream alongside the psychogun. Slowly, Johnson’s memories started coming back to him. Right at that moment, intruders broke into his apartment and started gunning down Johnson, addressing him as “Cobra”. 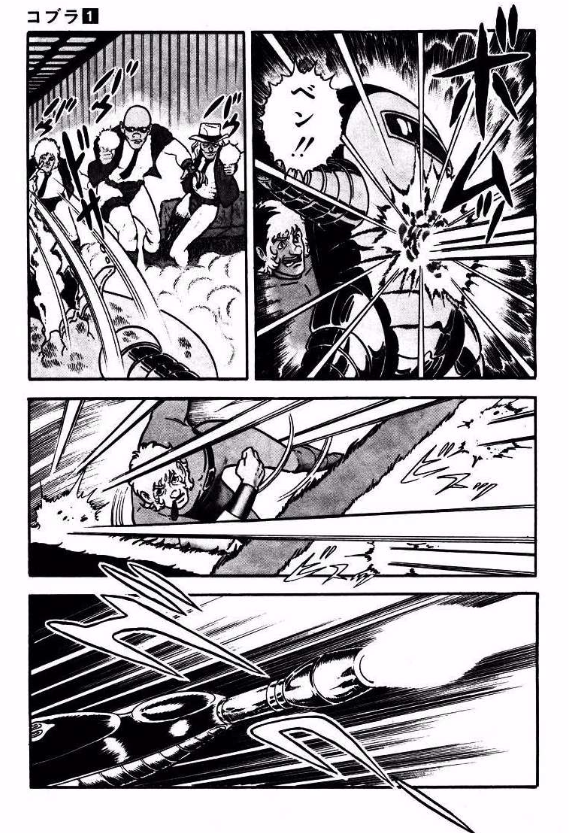 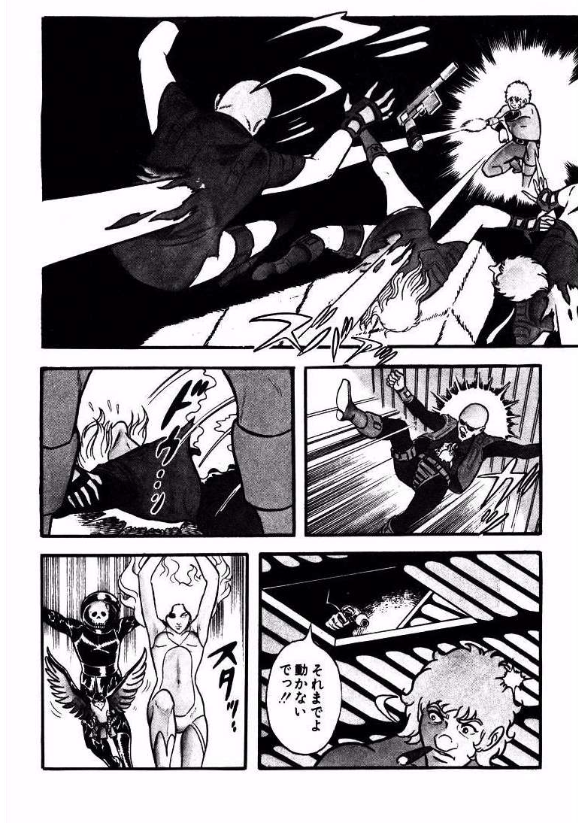 Ben threw himself into the line of fire and covered Johnson from being shot. Thanks to that, Johnson was able to strike back with his psychogun, killing everyone in an instance. 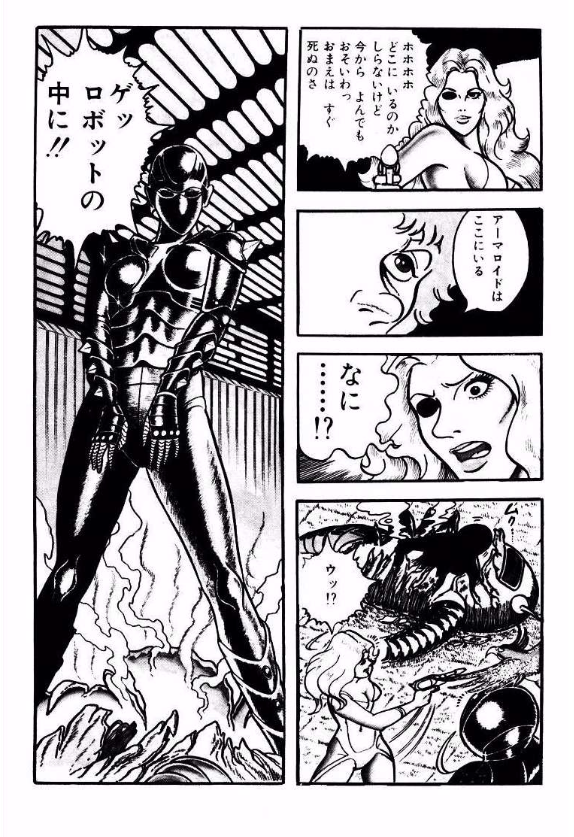 Two more intruders came in and held Johnson at gunpoint. But Johnson was as relaxed as ever, for his trusted partner was already there to aid him. From the clunky shell of Ben rose his former partner, Lady Armaroid. She had disguised herself as Ben to stay with Johnson while he lost his memories. The duo quickly finished off the remaining intruders and secured victory. 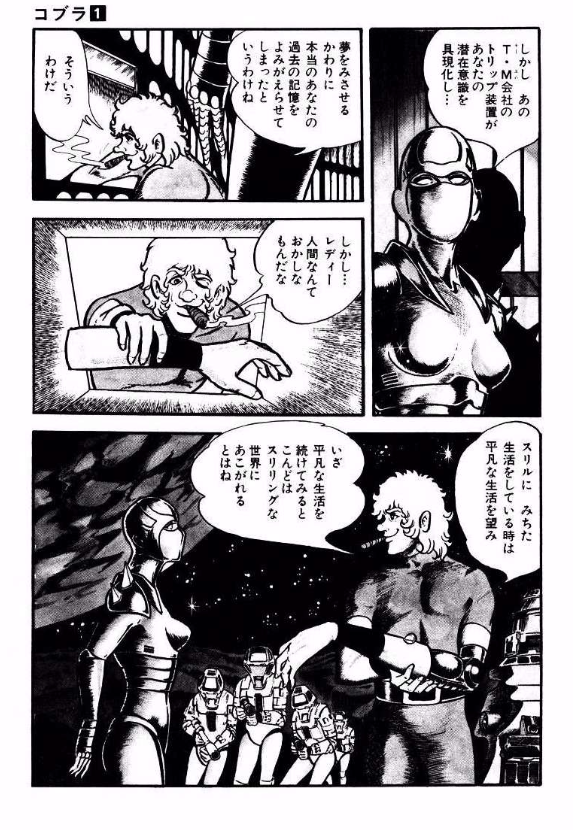 Following Johnson’s triumph, memories of his former existence as Cobra came rushing back. He was indeed Cobra, the adventurer. Hunted down by the space pirates and on the run for years, Cobra had surgically altered his appearance and his memory was erased to lead a quiet life on a distance planet three years ago. 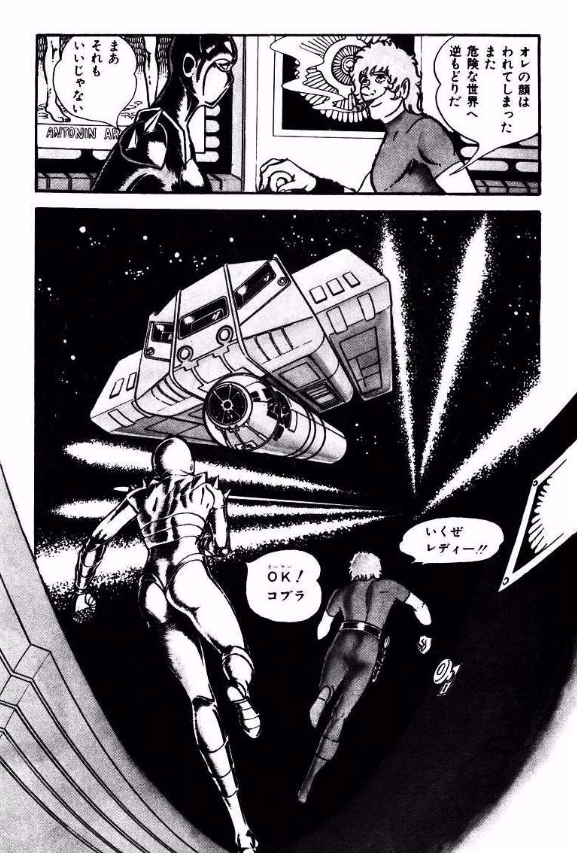 The pirate guild and its members were now aware of Cobra’s new face and existence. Once again, Cobra and Lady Armaroid resumed their adventures together.
What awaits Cobra after his revival? Find out as the legend of Cobra continue to unfold.
COBRA
▸
COBRA, Terasawa Buichi