Hi everyone! Speaking of soccer manga, I think it is “Captain Tsubasa.” I love soccer, but I can't play it. It's Boss from Manga Republic!
Captain Tsubasa 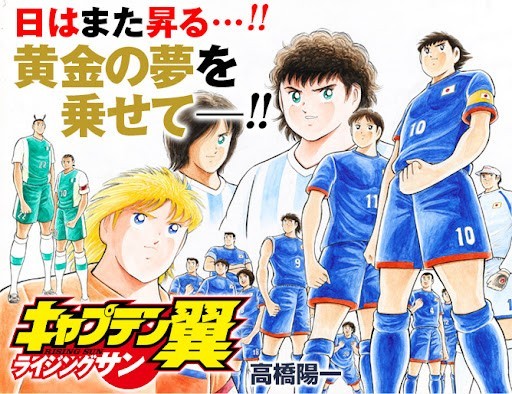 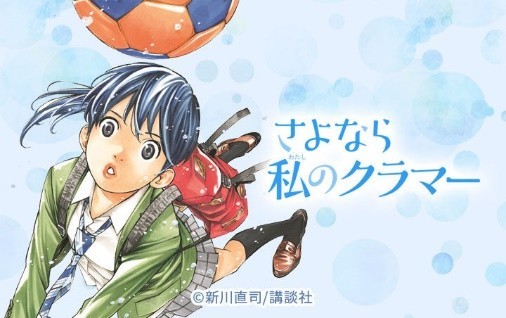 【Anime Adaptation in 2021!】
Finally! the craziest soccer manga made into anime!
What is Blue Lock?
Let's read Blue Lock before 2022! 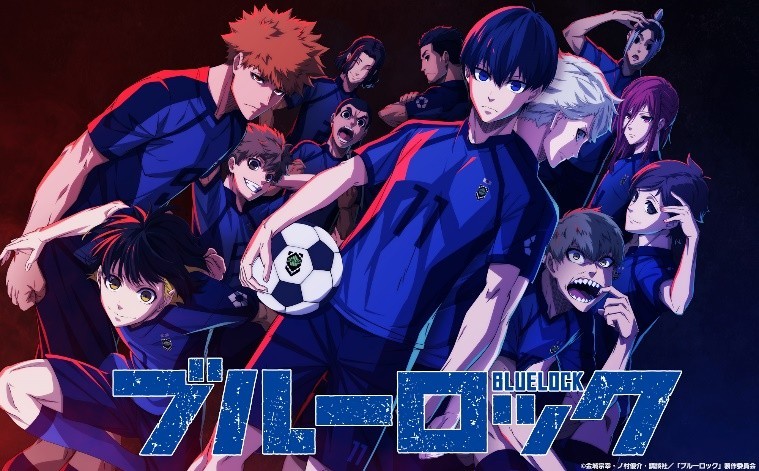 The anime, Blue Lock, will be aired in 2022! In this article, we will review what kind of story Blue Lock is, for about 5 min!

What is Blue Lock? 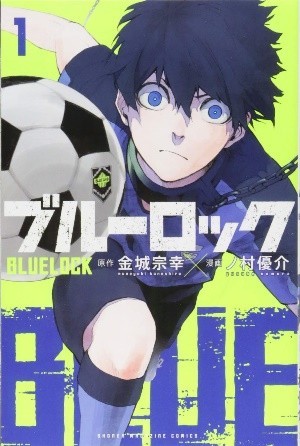 https://manga-republic.com/product/tag_page.html?tags=17074
Blue Lock is a soccer manga that has been serialized in Weekly Shonen Magazine since 2018. As of August 2021, this popular manga series has sold over 5 million copies. It was also awarded the Kodansha Manga Award in 2021. It has been very popular and become a buzz worthy manga in Japan.
The news about the anime adaptation in 2022 got many people's attention.

Sold over 5 million? This number is quite amazing!! At this point, the comic books have released up to 15 volumes, right?

Yes I think so, too! I think it will be a little difficult to explain about the stories of all 15 volumes of comic books here, So, we want to tell you some of the great parts of Blue Lock as simply as possible!

Blue Lock - what kind of story is it? 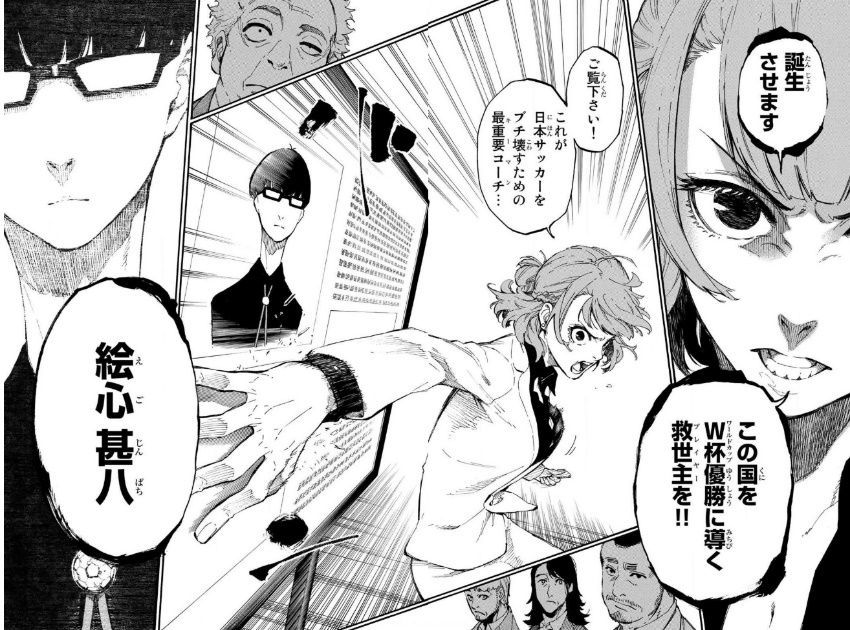 In the first scene, a meeting was held at the Japan Football Association. The theme of the meeting was “to create a program for cultivating strikers capable of winning in the FIFA World Cup.” In order to achieve the goal of winning the FIFA World cup, one person was chosen to be a leader of this program!

The person chosen to be the leader of this program was Coach Ego Jinpachi.
300 players were selected to be the potential strikers.
The players were required to be “egoistically competitive.” 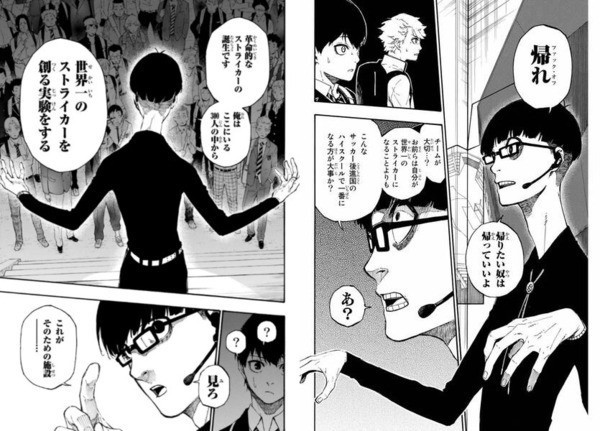 The coach, Ego Jinpachi gathered 300 students who were excellent FW players. He said to them “one person who passes this training program will be selected as a member of the Japan national football team. Then, we will disqualify the other 299 students from playing in any official football games permanently.

They can't play soccer in official games permanently......? That is awful!!

They are not forced to be in this training program. They have a choice to leave before it starts. However, Jinpachi said, “What we do not have in Japan's soccer is true competitiveness – You need to be egoistic.”

The main purpose of soccer is to score more goals than your opponent.
To be the world’s strongest striker, you need to be the most egoistic person in the world. 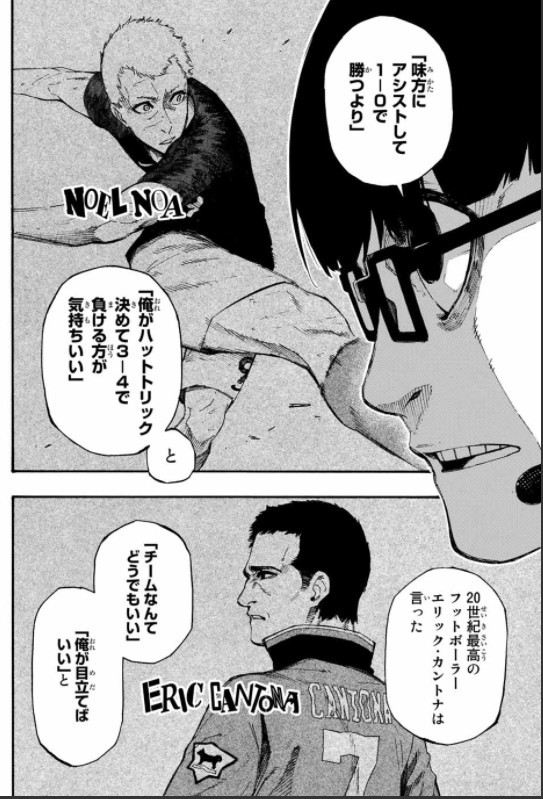 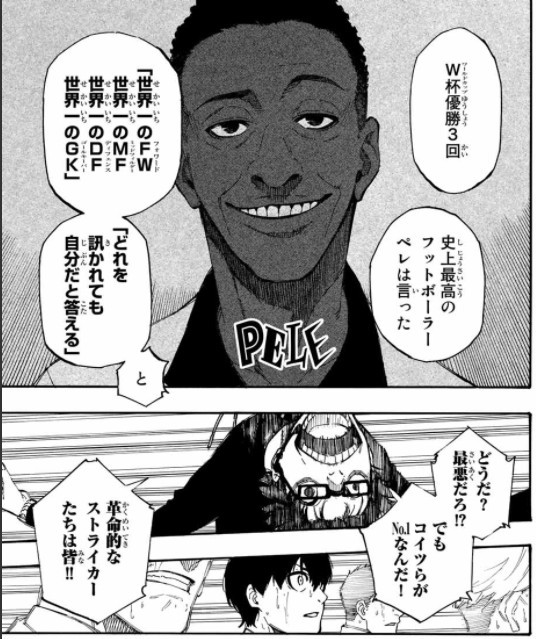 Jinpachi admitted that Japan's soccer has great harmony among players and their organization skills are excellent. However, other factors are all lacking as second class. The world's best strikers think of themselves first. They think their actions are more important than the team. They are obsessed by scoring goals. They are always confident and want to be able to say, “I am the one who scored!”
This type of player is lacking from Japan's soccer. They need one best player who is on top of a pyramid of 299 dead players. 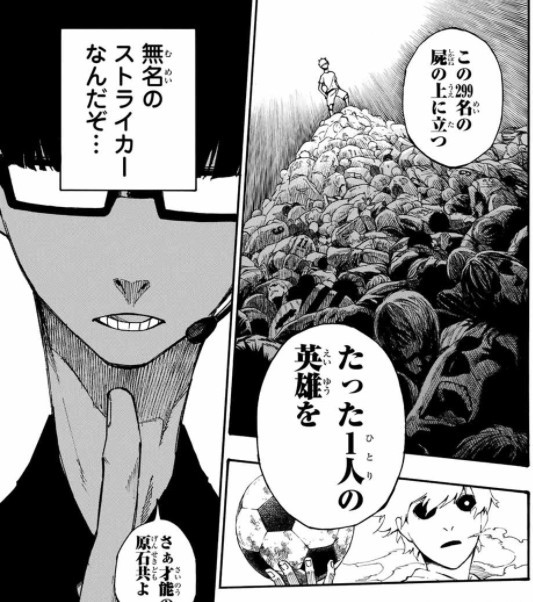 The program requires an egoistically competitive player.
The 300 players started working on “himself., not for others or team!” 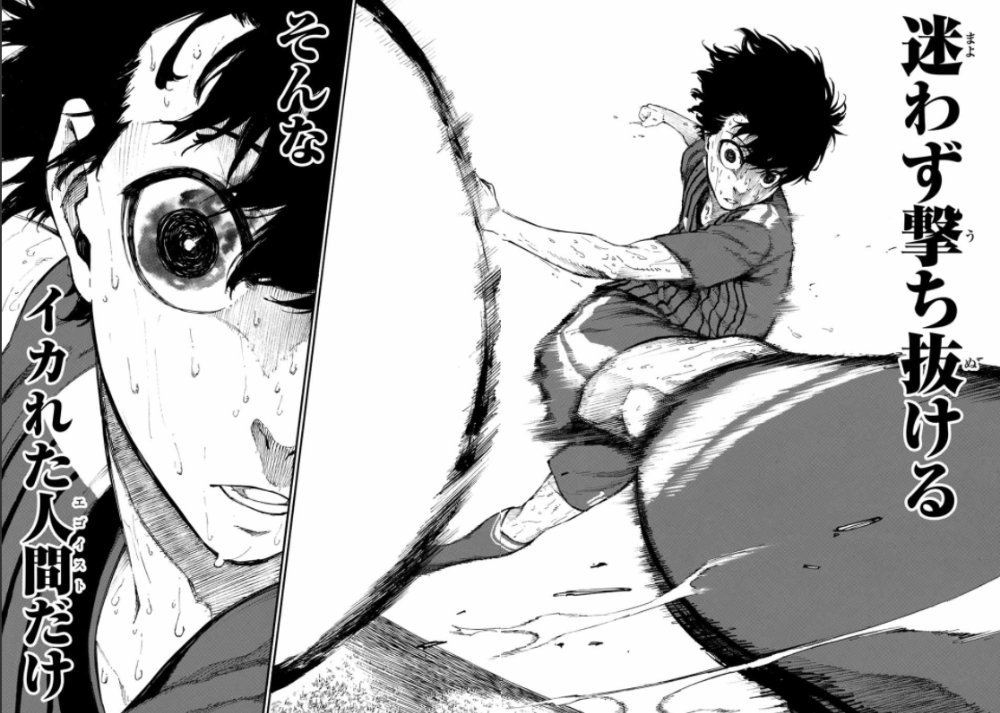 The students know the importance of the bond between players when playing a team sport. However, everybody also knows it does not make them a strong team. “They cannot win only with the bond between players.
If they decide to join the training program, they can't go home for a while. If they are disqualified from the program, they cannot play soccer in official games anymore.
BUT,
they want to be stronger. They do not want to lose. They want to lead the team to the world with their scores! The soccer players who are serious about winning should think that way. 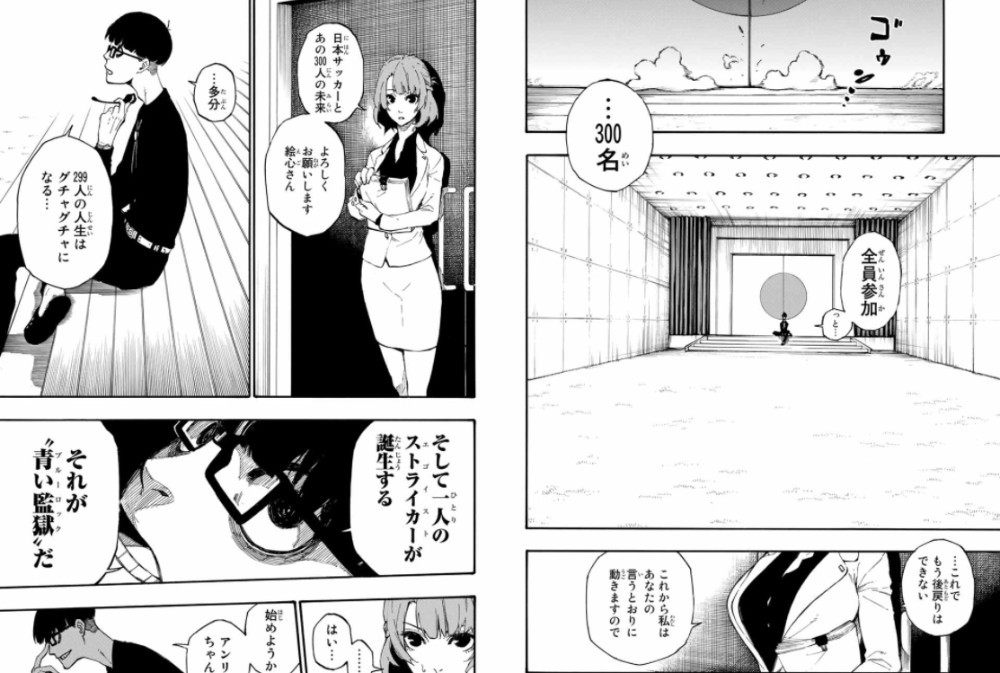 All 300 students decided to join the training program. To see this situation, Jinpachi said,
299 students’ soccer lives would change badly.
Then, one, strongest, egotistically competitive striker will be born. 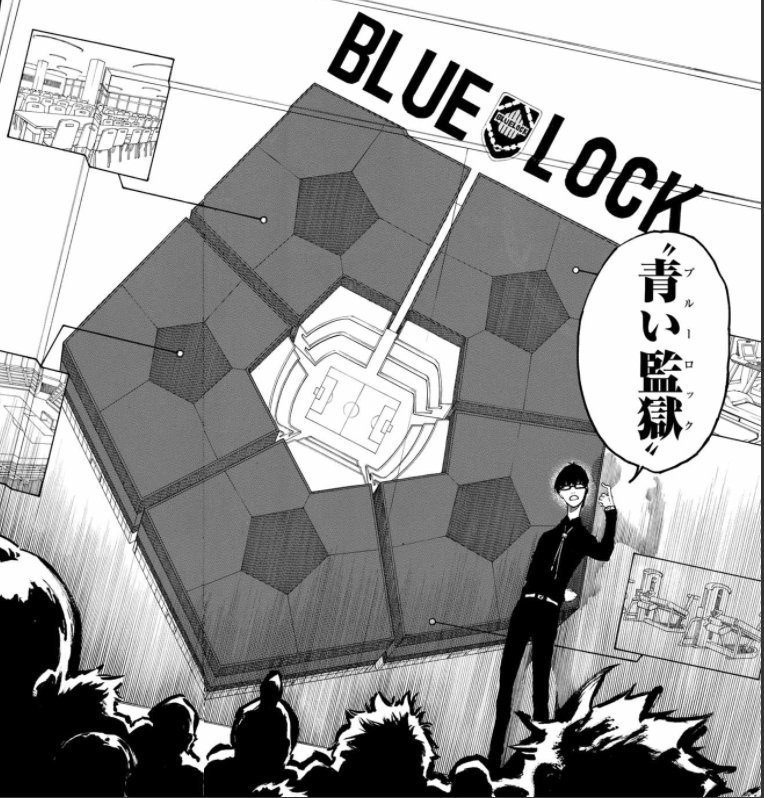 They have a soccer facility that 300 student players are locked into. That is the “Blue Lock.” The program begins with 300 players in the Blue Lock.

The reason why Blue Lock became a great hit was because the manga explains soccer logically and the lines are excellent as they appeal to people psychologically. So, once you start, you cannot put it down. You cannot stop reading one after another episode. 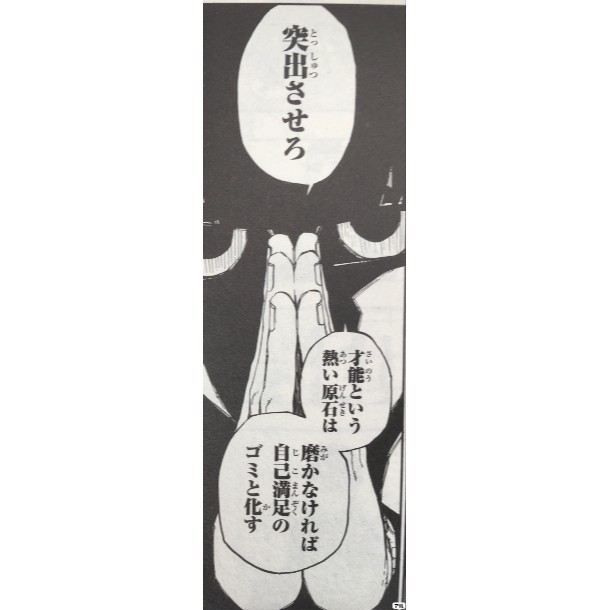 “Sticking out! Stone must be polished. Otherwise, it is just a garbage.” 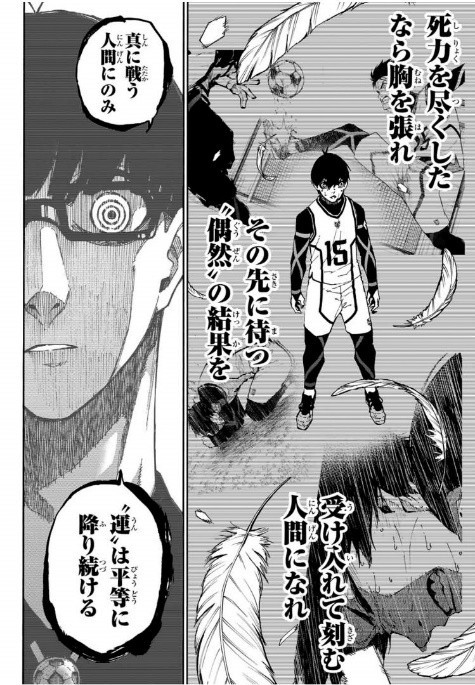 “If you did your best, be proud of yourself. No matter what happens as a result, it is just a coincidence. You just have to accept it quietly. Luck is evenly shared with the person who works seriously.”

Once you start watching Blue Lock episode one you will feel it is more interesting than you might have thought. It's a very addictive and interesting story with developments that you will want to check more and more. The students were trying hard to get the only position – the egoistically competitive striker. It is just fierce.

Here are the details of episode 1! 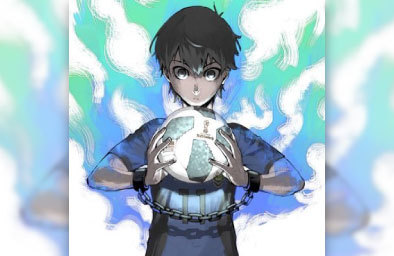 Even if you do not know much about soccer or its rules, please read it. The lines in this manga always strongly encourage people who are feeling down.

Can it encourage us softly?

It is not a soft touch. Because both Jinpachi and the 300 students are super serious about their soccer life and devoted to the program.
Blue Lock
▸

That's all for today! I'll see you in the next article!!
Have a good day!!
Captain Tsubasa, Blue Lock, Farewell, My Dear Cramer (Sayonara Watashi no Cramer)