Hello everybody. I would never want to go there if there was a little mysterious unknown world. I’m Manga Republic’s Boss.

Hello everybody! I would want to research it at least a little if there was a little mysterious unknown world. It’s Saori from Manga Republic! 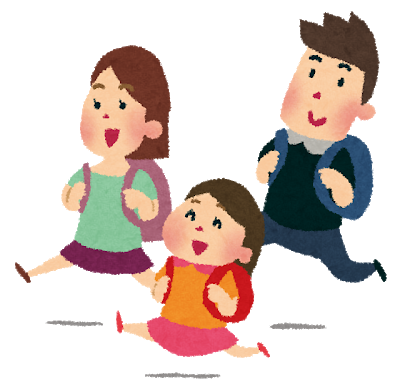 You know what? Such careless people like you get killed first in the horror movie. I’ve seen such people die so many times before.

But you know what? When it comes to the horror movie, it might be one of the important elements that we try to research the world~! We just cannot help but research it if we see something mysterious, no? And! The Manga series that we’ll be featuring today is the horror movie full of mysterious stories, which makes us want to explore ‘the place which we’re not suppose to explore’ too……! 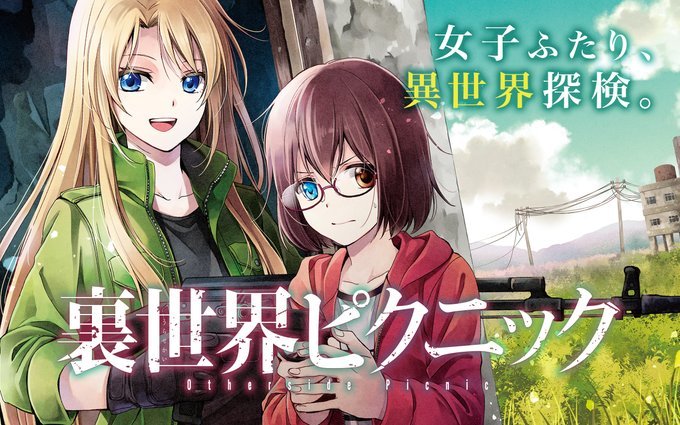 By the way, Mizuno Eita-Sensei was in charge of the illustration of Spiral: Bonds of Reasoning (Spiral: Suiri no Kizuna) as well! 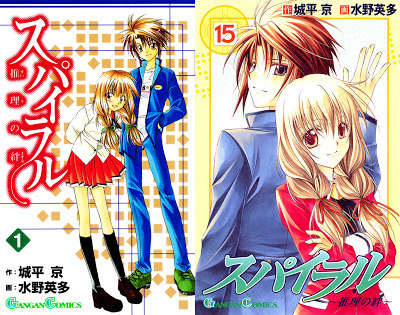 Oh~! That one! I thought I’ve seen this touch somewhere before! 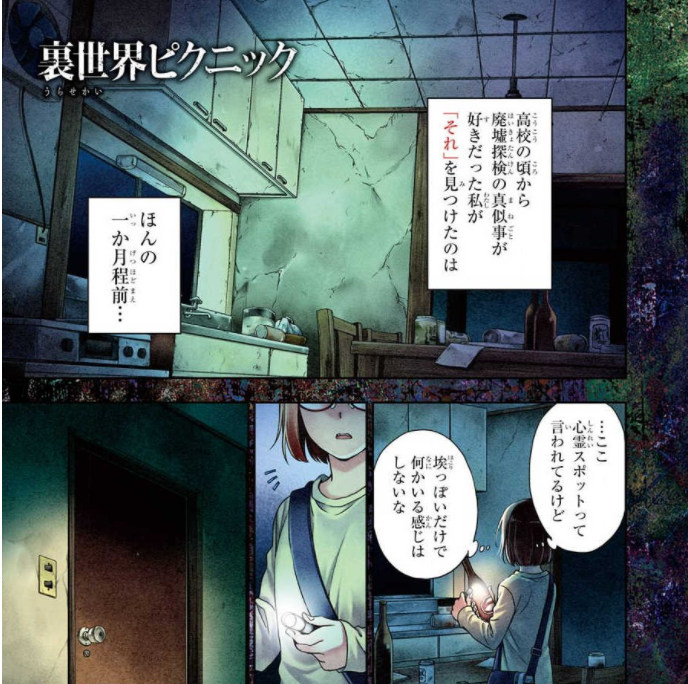 A month ago, a college student, Kamikoshi Sorao was exploring the ruins.
It’s been her hobby since she was a high school student and she thought that day would go on as it usually does too……
However, when she opens one of the doors in the ruins…… 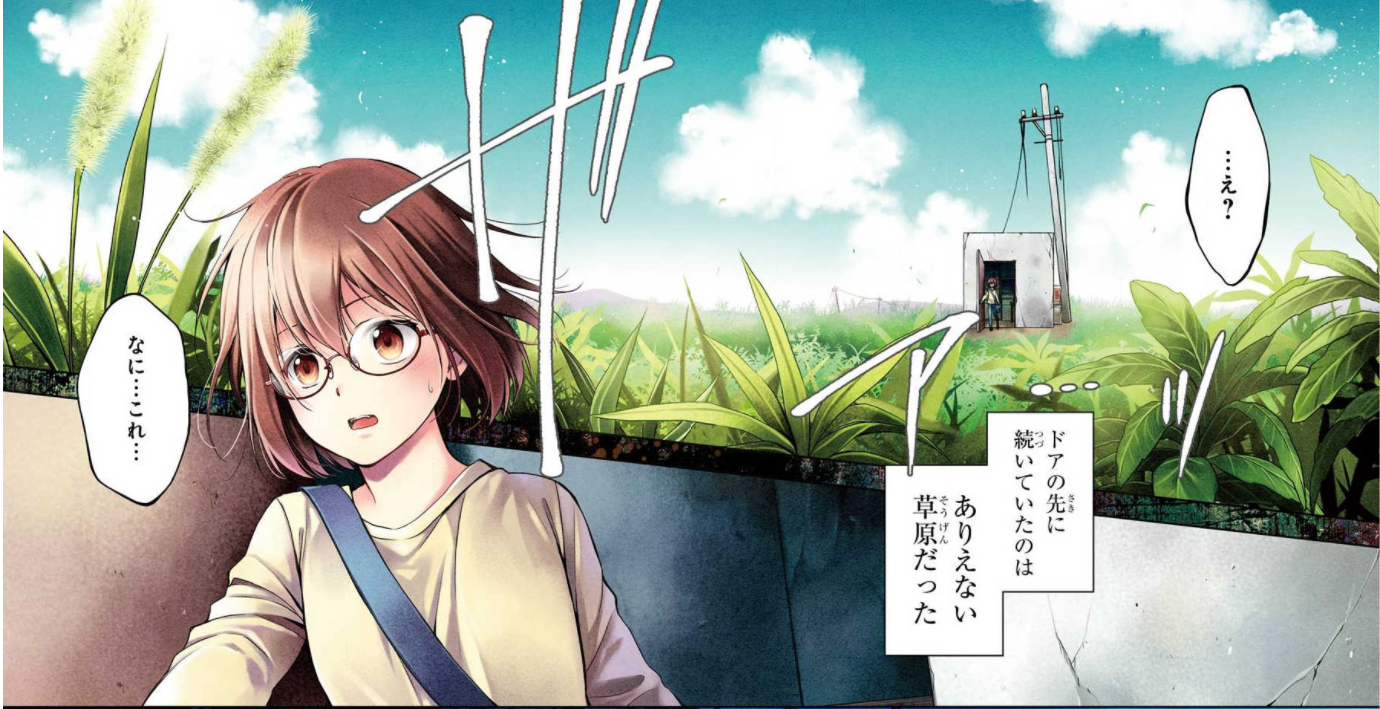 The door leads her to the “place that shouldn’t exist.”

Sorao, being too curious, is now regretting. Sorao sees “that thing” on grasslands and soon after that, her body would never move.
The place she falls down is where the puddle is. If the body would never move, then she would be sunk and drown to death……
Sorao is prepared to die……

……when she hears something getting closer to her.
She finds out that is “that thing” again but…… that person runs to her calling her.
Sorao, not being able to move but speak, tries to ask her for a help. 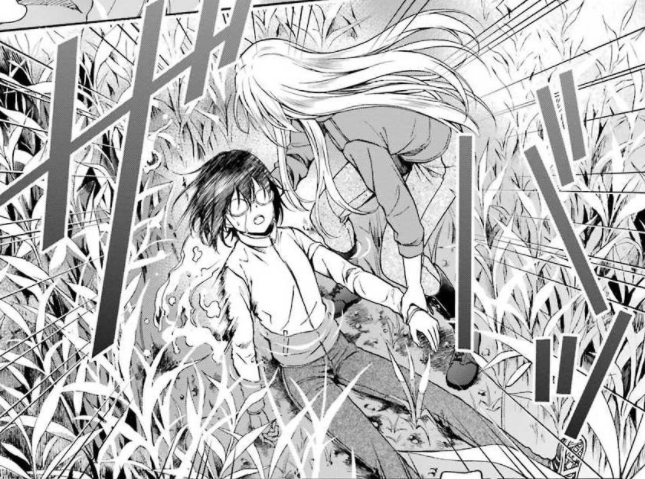 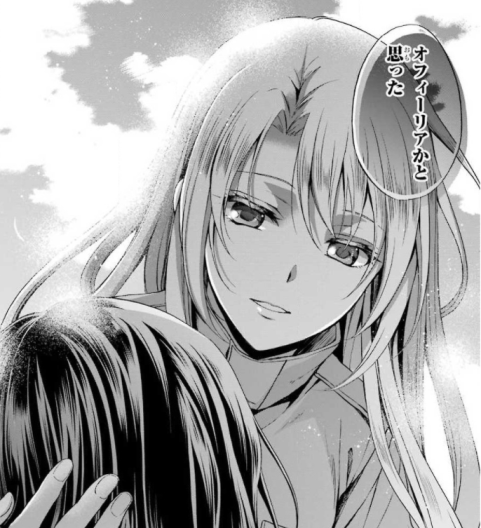 The person who saves her is a beautiful lady with brond hair.
She looks at Sorao and smiles, saying “I thought you were Ophelia.”
Amazed, Sorao warns her that “that thing” that she saw might be around them. 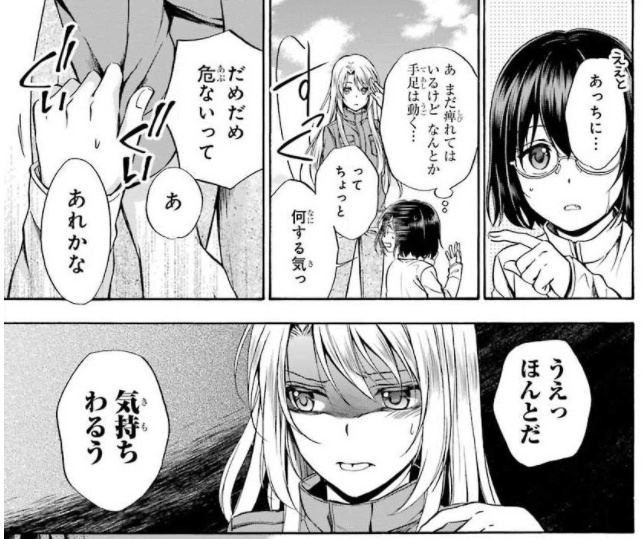 That lady looks disgusted, saying “Ewwww……,” when she sees where Sorao points at.
Sorao then unconsciously looks at that direction…… 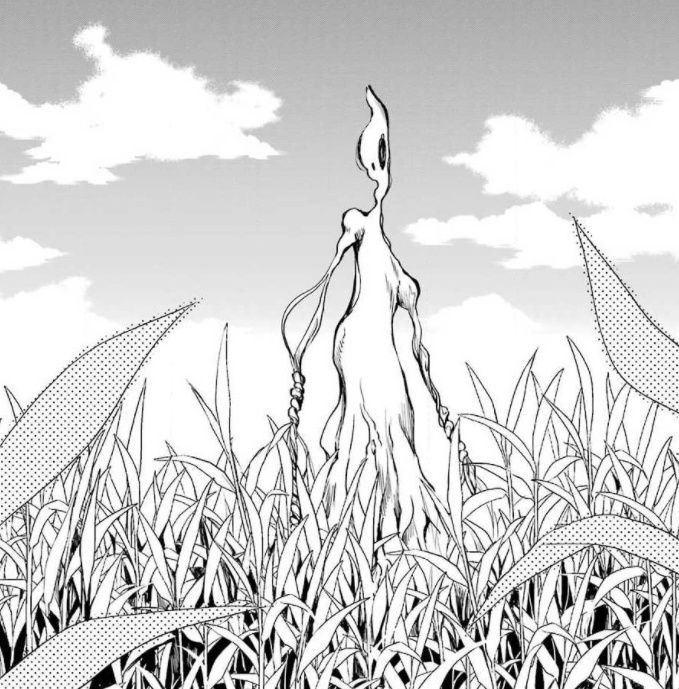 “That thing” is still there. 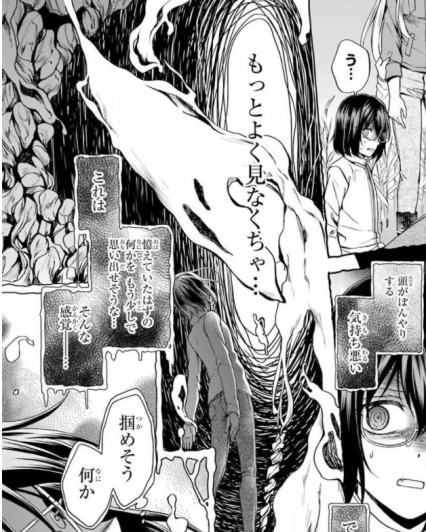 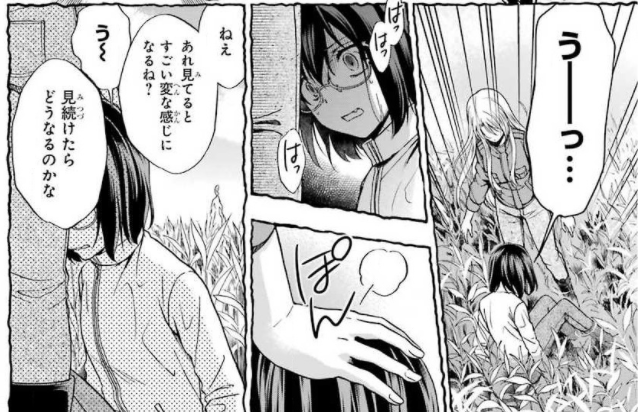 Sorao still has no idea what the “that thing” is.
However, she feels like she has a mysterious sense…… “Maybe I might know something about that thing?” I might recall it if I take a closer look. But yeah~ I don’t know it. Well, wait, I might be able to recall it…… That mixed feeling is going around in her mind and she ends up not being able to know even who she, herself, is.
Sorao becomes conscious right before she almost goes crazy. That pretty lady tells her that she had the same sense as Sorao got, breathing unsteadily. 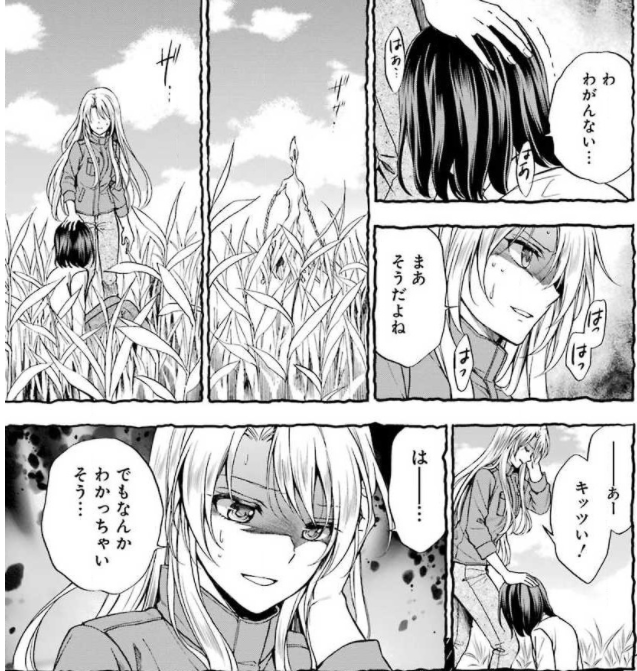 Then they feel tension between them. It seems like that “that thing” is getting closer to them slowly.
Sorao, feeling giddy, tries to stand up, but she still cannot stand on her own.
The pretty lady throws a stone to “that thing.” 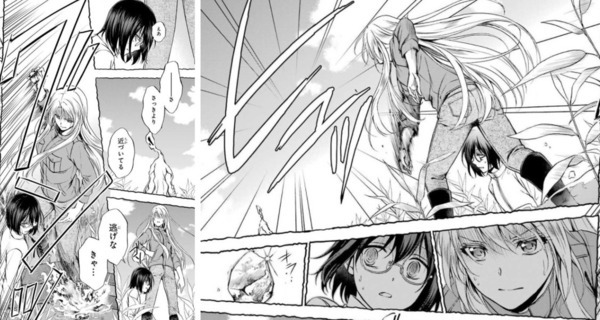 Then “that thing” disappears.
She says what she threw is the “rock salt,” and she always carries it to protect herself from the evils. 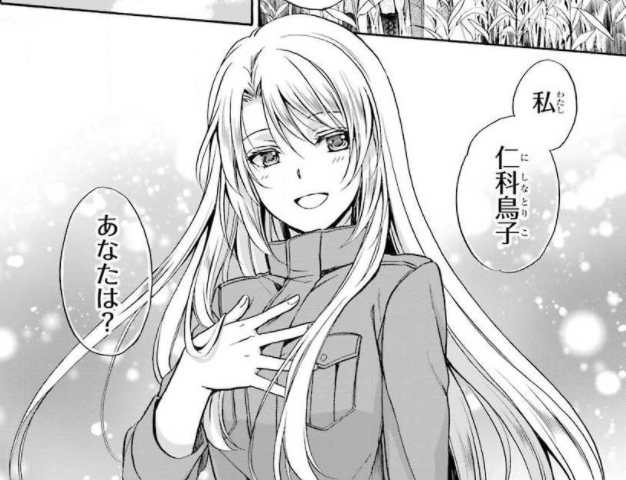 Then they finally introduce themselves to each other.
The pretty lady’s name is Nishina Toriko. She says she has got lost, walking in a long way and asks her to guide her to the entrance (the exit), where Sorao came through. Since the “entrance” that Sorao came through was right across from where they are, they decide to come back to the original world anyhow.

The rock salt that they retrieved has turned into a clear square-shape object.
Toriko is surprised to see the ruins where they end up coming back.
She says it’s very far from where she was and she also notices that space is being warped. Sorao has explored the ruins three times but Toriko says she has been exploring that space ten times already. 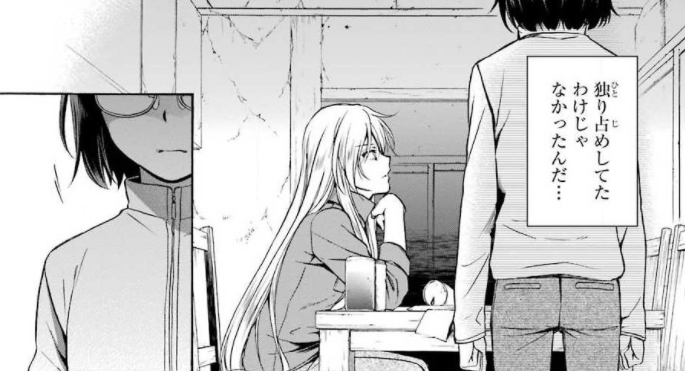 Sorao actually had a sense of superiority being able to get that quiet space only to herself but…… that fact is washed away by what Toriko says. She feels a little disappointed but they change the subject which is about “that thing.”
Sorao knew what “that thing” was.
Actually, she has an idea. She thinks that it’s a monster, known as one of the Japanese urban legends, called “Kunekune.” Just like some uncertain mysterious stories such as Slender Man or Bloody Mary, known overseas, it might be the urban legend, where we go crazy if we see that thing, wiggling itself. 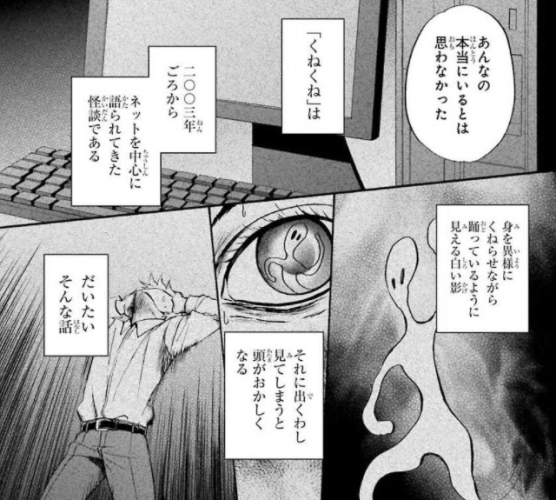 And Toriko says she’s been looking for someone in “that world.”
The person’s name is Satsuki and Toriko has kept going to “that world” again and again to look for her…… 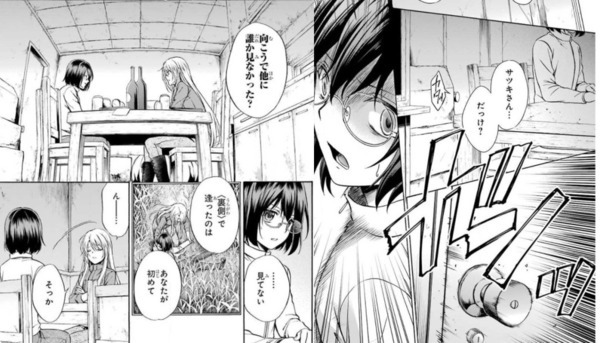 While they are talking, they hear someone banging the door that leads to “that world.”
Getting prepared, Sorao and Toriko threaten it. Toriko even has a gun in her hands. 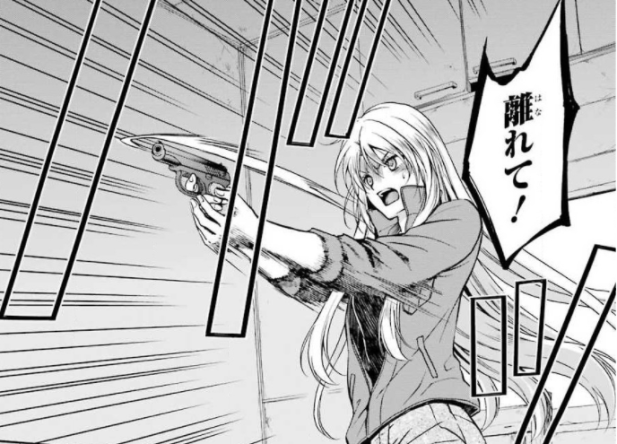 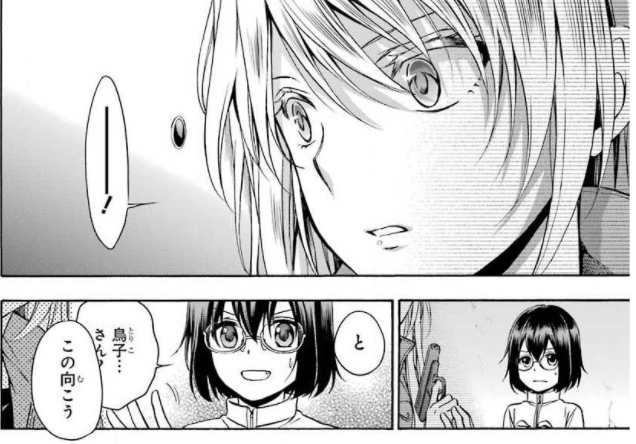 When something’s gone…… they open the door……
……, which no longer leads to “that world.” The door now leads to where it is supposed to be. The secret place that only they knew has just disappeared. Sorao feels so shocked about it, not knowing what to do. 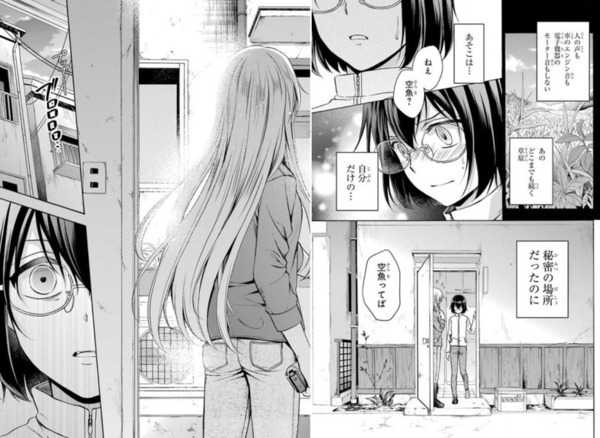 A week passes since that incident……
Sorao is having a normal college life, just like before. The door of the ruins no longer leads to “that world.” What’s worse, her cellphone is submerged underwater and no longer works. She’s having such bad days……

Sorao wants to see “that world” again but…… there are no options in her that she goes there with Toriko, holding a gun. It’s so risky and she doesn’t know how she can reach out to her, either. They haven’t even exchanged their phone numbers so there’s no way they can see each other…… 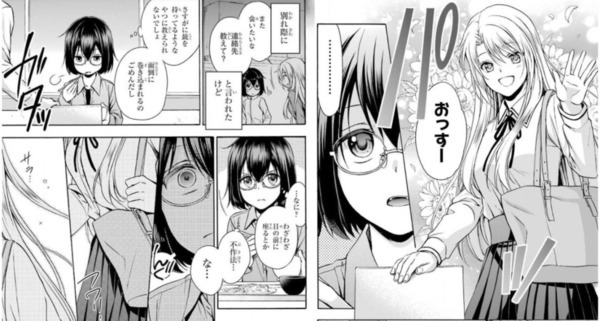 But guess what? Toriko shows up.
She says she researches her from the college, which she happened to tell her. Sorao looks disgusted to see her. 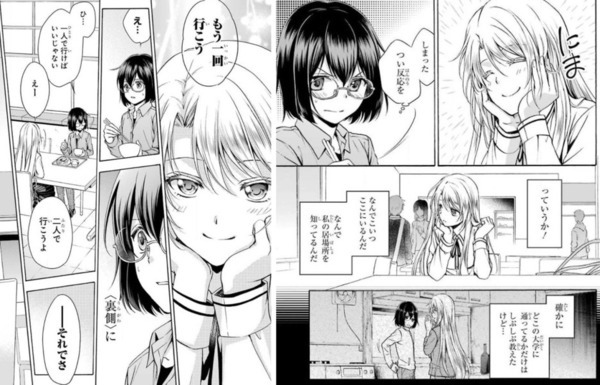 Toriko says to her;
“Let’s go to that world together.”
Then Sorao loses words when she says:
“It was Kunekune, right? Let’s go hunt ‘that thing’!” 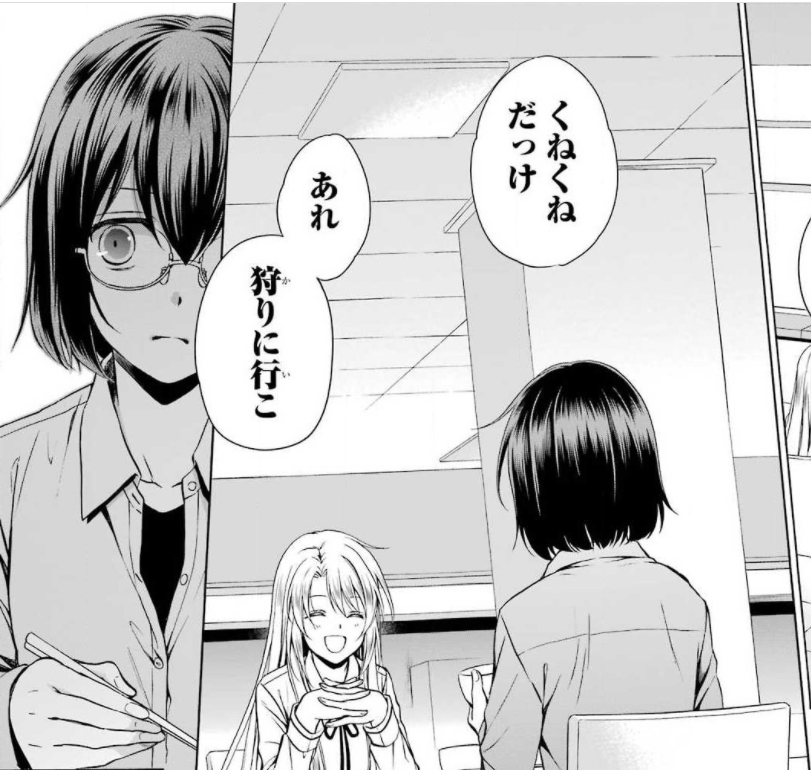 It looks like that she finds out that the rock salt that turned into a clear object was made from the unknown material that doesn’t exist on earth. Therefore, someone wants more samples of that object. The person even wants to pay a lot of money for it. 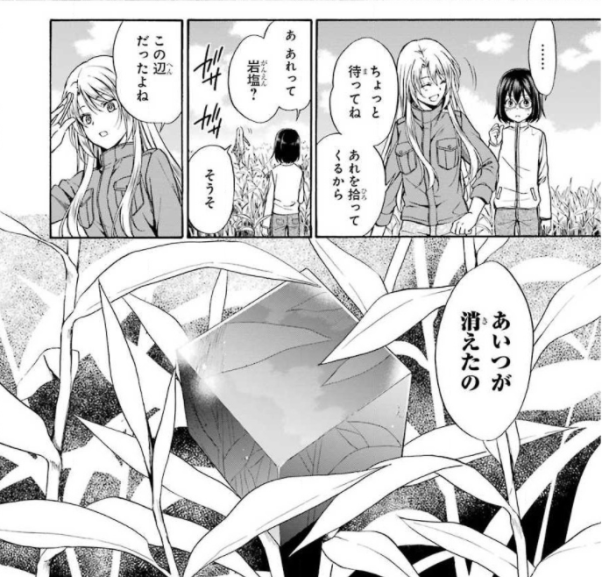 Alright! This is all for today! We’ll see you all at the next article!
Bye-bye~!
Spiral: Bonds of Reasoning (Spiral: Suiri no Kizuna), Otherside Picnic (Ura Sekai Picnic)