Hello everybody! What’s my ideal workplace like? Being able to eat as much snacks and sweets as I can! Isn’t it a dream-like workplace? It’s Saori from Manga Republic!

Hello everybody. What’s my ideal workplace like…… well…… I would say the one, having a comfortable environment, where everybody at the office gets along well and respects each other’s private life too. I’m Manga Republic’s Boss.

Yes, we can never ignore the common environment “workplace” as long as we work at a company……
However, the Manga series we’ll be featuring today focuses on the appalling workplace! Where on earth is that workplace ……!?

【Winter 2021 Anime】To All the Cells, Work Hard As Long As Life Lasts……!
Let’s Enjoy Learning the Mechanism of the Human Body Through Cells at Work [Black]! 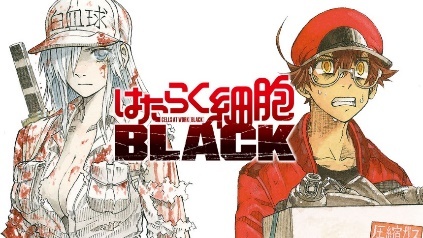 What Is Cells at Work [Black]?

Cells at Work [Black] is a spin-off, depicted in the worldview of Cells at Work! It’s supervised by the author of the original, Shimizu Akane-Sensei, and written by Harada Shigemitsu-Sensei. Chapter 1 was serialized in 2018 and Chapter 2 was serialized in 2020. As for the comics, seven volumes have been released.
Unlike the original, which is set in the healthy human’s body, meaning it’s a lively workplace, this Cells at Work [Black] is set in the unhealthy human’s body, meaning it’s such a poor working environment Black Company as the title says. Therefore, we see more machines or monsters in the story than the original. We can learn that unhealthy life affects our “body,” and everything is depicted in a comical way as well.
The premiere of the new anime season set to air in 2021 has announced as a winter anime. 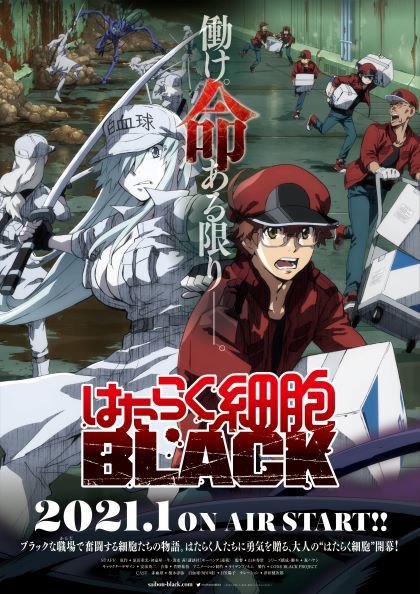 I saw the original Cells at Work! through anime! It was so easy to understand how the human body works in a world of anthropomorphic cells when we get injured or sick! It was so fun!

Yeah…… the worldview is the same as the original Cells at Work!…… but the working environment is completely different! Here’s what the spin-off version of Cells at Work! [Black] is like!

Outline of Cells at Work [Black]! 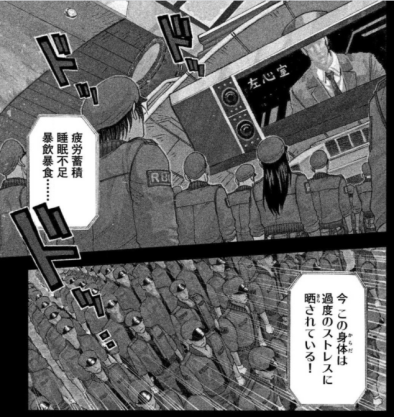 “Cumulative fatigue, lack of sleep, excessive drinking and eating…… This body is burdened by such excessive stress! You guys are the ones who can get over this crisis. Keep carrying and delivering oxygen! C’mon now!” 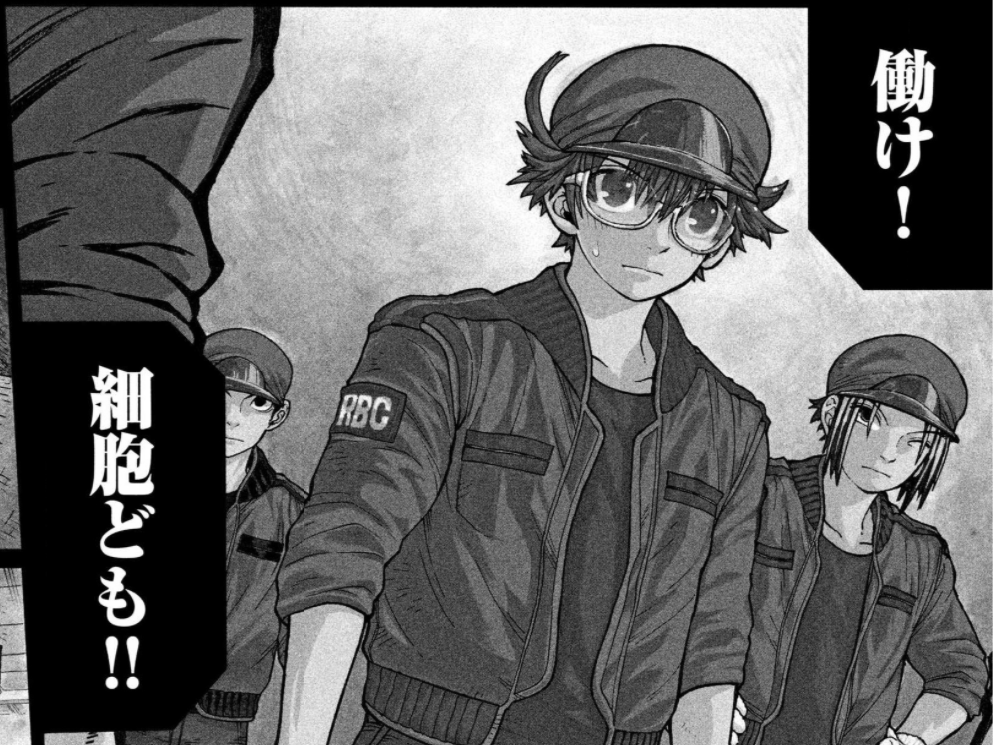 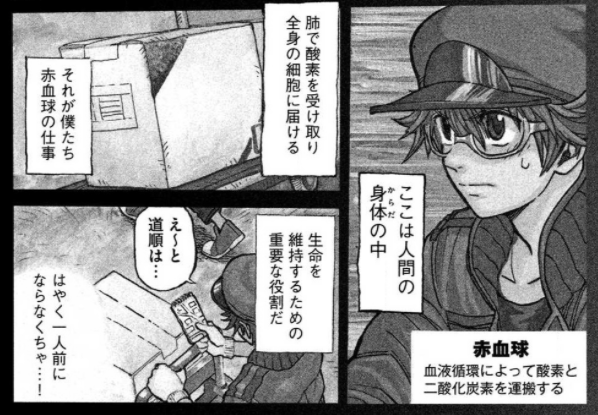 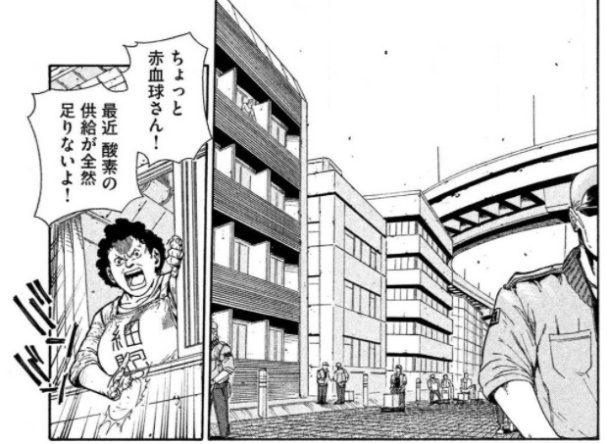 The story is set in the human body, and the main protagonist is Erythrocyte, AA2153. Just like every day, he is busy working on his duty, “carrying oxygen throughout the body.” ……However, he hasn’t been able to deliver enough oxygen to every corner due to the unhealthy lifestyle that the human has had, while he has kept working so hard.
However, since the oxygen is limited, it’s delivered primarily to the main organs. One of the marginal organs, an old lady, again scolds AA2153, saying “I don’t have enough oxygen! Are you trying to kill me or anything!?” 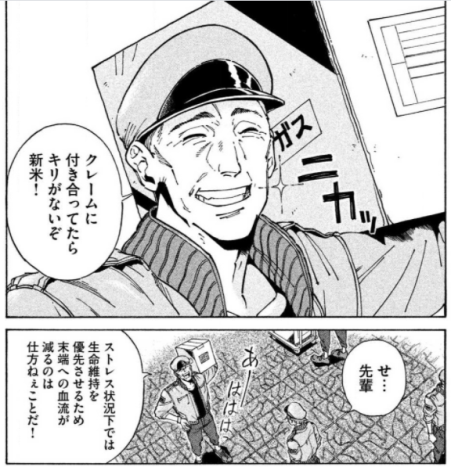 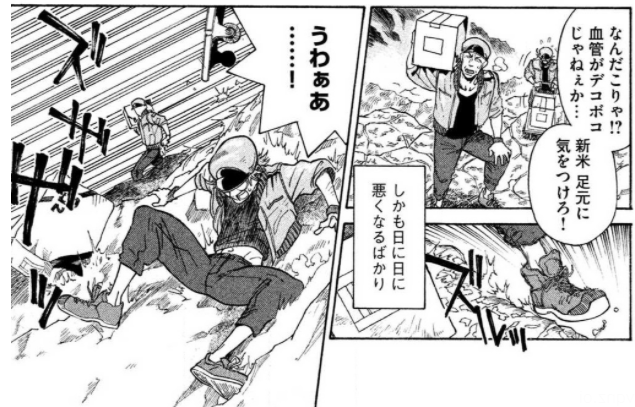 However, senpai Erythrocyte never takes that complaint seriously. This workplace (the human body) is now burdened by excessive stress and it’s “very common” that enough oxygen doesn’t deliver to the marginal organs. Therefore, all the Erythrocyte have been scolded so often that he’s kind of been used to such complaints.The senpai Erythrocyte tells AA2153 so.
Even AA2153, still a rookie, understands. That this “workplace” is literally “BLACK” with constant troubles…… Such a poor working environment……

While AA2153 is desperately running around the body, LDL dump cholesterols, like littering, which causes angiosclerosis. Due to carbon monoxide’s invasion, more and more red blood cells (their colleagues) get combined with hemoglobin, ending up becoming a zombie-like figures, abandoning their work, carrying oxygen. 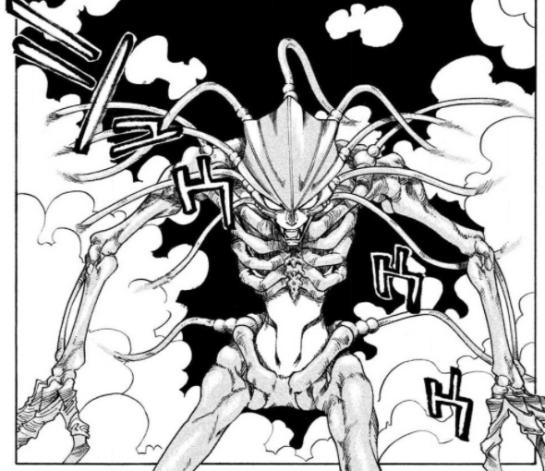 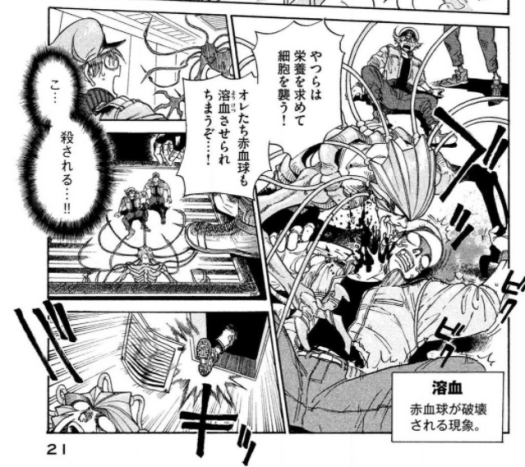 What’s going on in the body now? Not knowing what’s causing it, now even the “bacteria” invade the body. The bacteria are the worst enemy of the body organization, starting to destroy and kill all the organs in the body.
And finally, the bacteria come to AA2153 too……!! BUT! 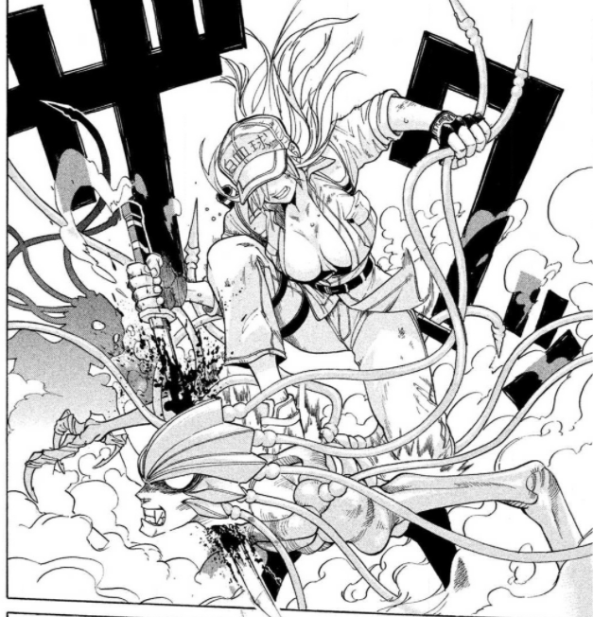 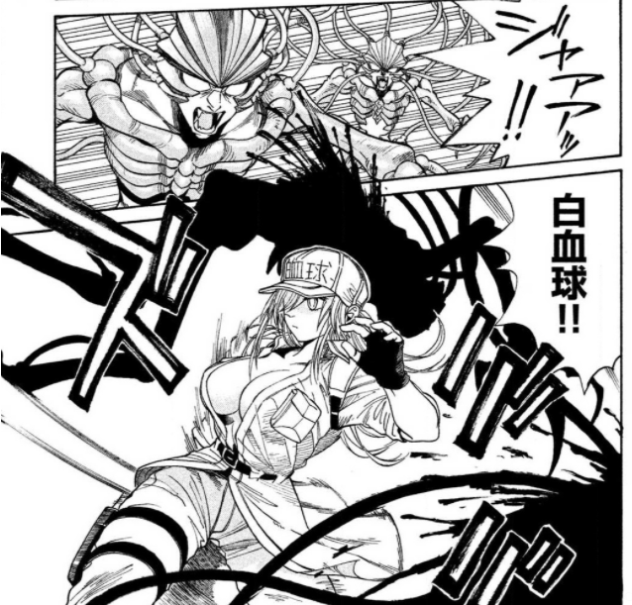 The white blood cell, Neutrophil, U-1196, shows up.
Their job is to “remove” the foreign substance, but…… they are late getting there. The reason is that they’re too busy removing such substance because so many bacteria or germs invade this body. They say they have been “removing” such substance before they come there too.

Neutrophil, U-1196, heads for the site right away.
Almost paralyzed, AA2153 is asked to go to work by the senpai Erythrocyte. 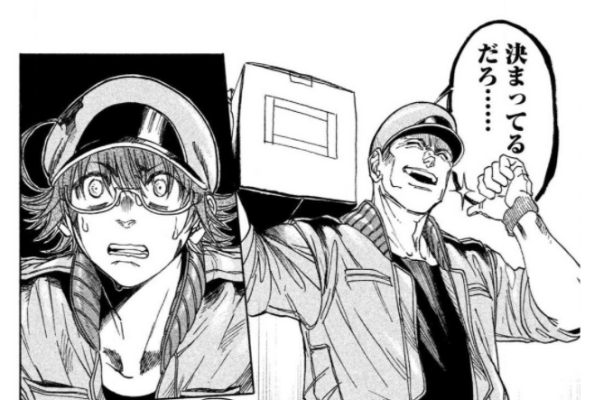 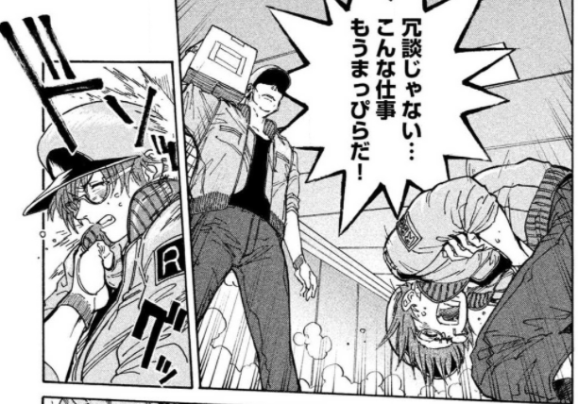 However, AA2153 refuses it.
All his colleagues die one after another. The environment never gets better. Lots and lots of troubles happening every day…… “No way…… I cannot stand it anymore!!!!!” AA2153 shouts. 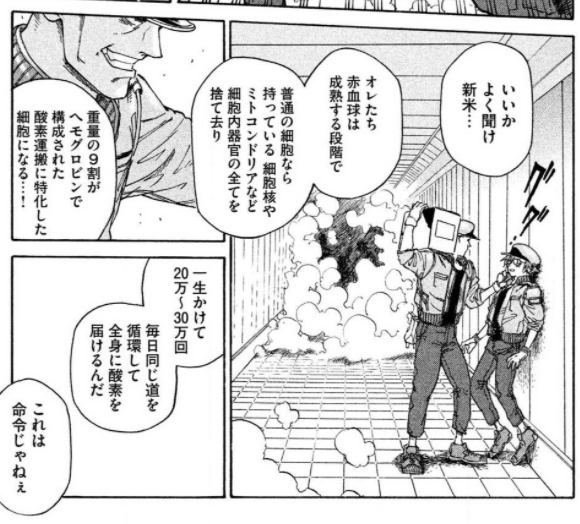 The senpai Erythrocyte, then, violently grabs his collar and forces him to stand up. Then he says to AA2153.
We, Erythrocyte, deliver oxygen to every corner of the body, going back and forth 200,000 to 300,000 times a day every single day in lifetime. In that process, we abandon 90% of our cells that we innately owned and still try to live, trying to make them change to the ones, more specialized with delivery.
Why do we, Erythrocyte, have to deliver oxygen to every corner of the body, making our 90 of the body change, while understanding it’s such a risky way? 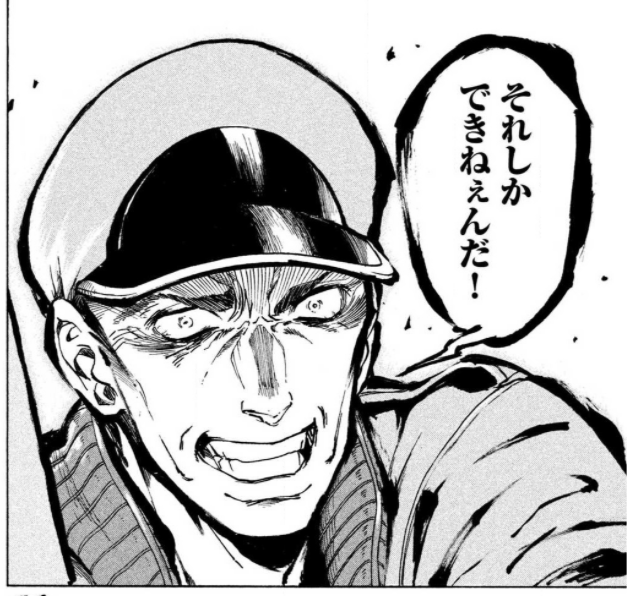 “Because that’s all we can do!” 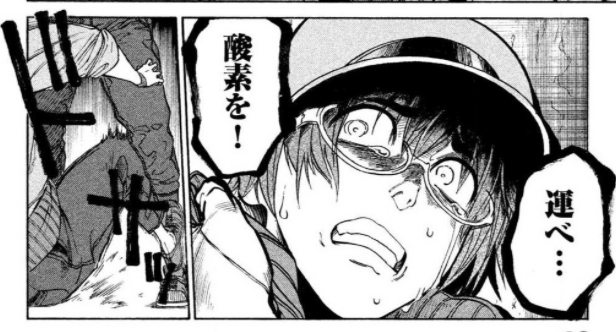 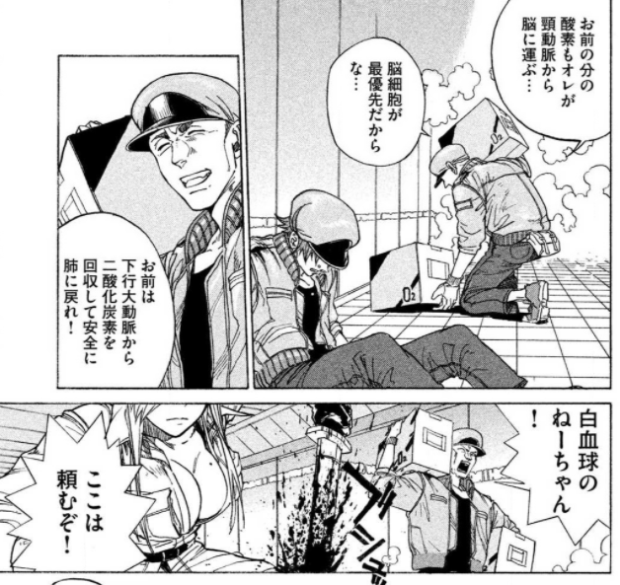 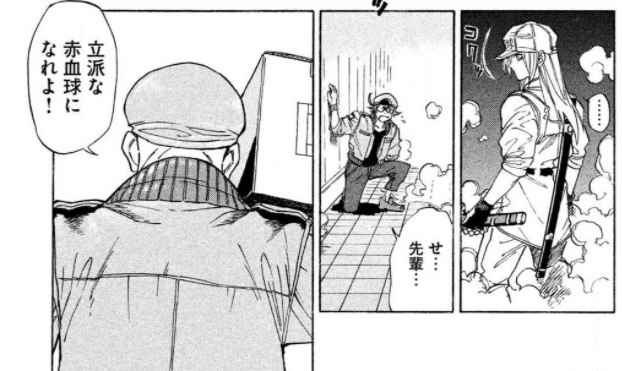 How did you like it? This is how we can learn how our body works. It’s easy but dramatic, right? That’s the Cells at Work [Black]! How is AA2153 going to grow in such a tough workplace……?

Well today, I guess I’ll eat nutritious good, do a moderate amount of sports, refrain from drinking alcohol, keep myself warm, drink enough water, and go to sleep in a relaxed mode.

I’m sure you will care more about your body if you watch or read it!