Hello, everybody! Speaking of a housekeeper, I have an image of the mastermind behind the scene or even becoming the victim at the beginning of the story if she appears in the horror movie. It’s Saori from Manga Republic. 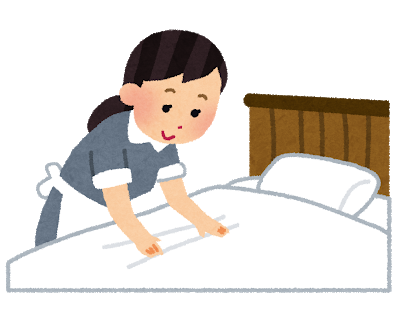 Wow, your image of the housekeeper is a little too extreme, no?
I’m Manga Republic’s Boss.

Well, because it’s quite rare in Japan that we hire a housekeeper, you know? So I only have the image of them from the movie……
So! The manga series we’ll be featuring today is a lovely shōjo manga, where a housekeeper girl has a crush on a male novel writer!

【Shōjo Manga】A Housekeeper Girl Has a Crush on a Writer. A Special Number for Tsubaki-chou Lonely Planet!

What Is Tsubaki-chou Lonely Planet?

It’s a Japanese shōjo manga series, serialized since 2015.
It’s written and illustrated by Yamamori Mika-Sensei and it used to be serialized in the magazine, “Margaret.” It concluded in 2019 with 14 volumes in total. 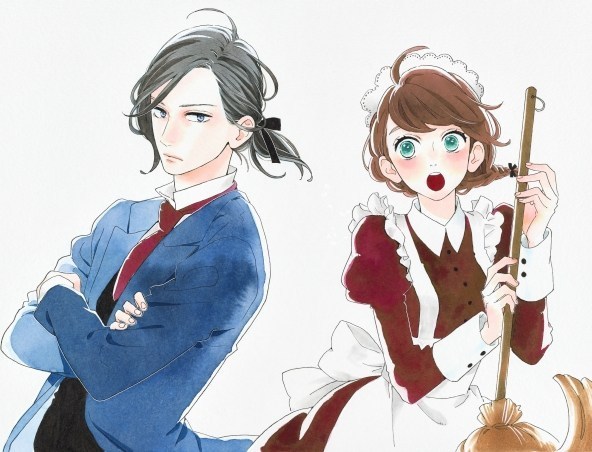 This series was highly rated while being serialized but it went viral even more by word of mouth after it concluded! I hear so many people have finished reading the whole series (14 volumes) at the same time because they couldn’t wait to know what would happen next!

Well, 14 volumes are the perfect length. I bet many of them were so curious about their romantic relationship. This shōjo manga series has been super highly-rated in Japan for sure! 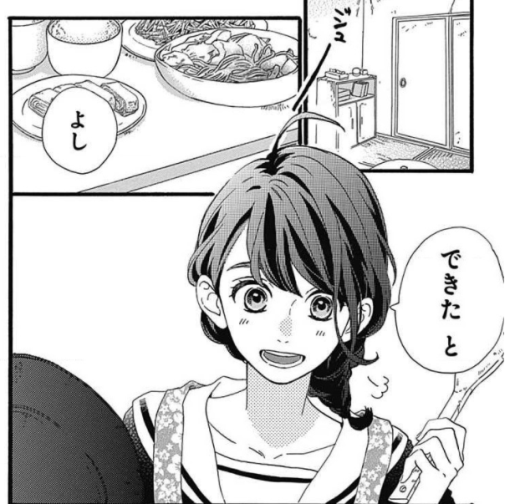 The main protagonist, Fumi, is a high school girl.
She is so mature and frugal of the money, doing all the housework on her own.
She has lost her mother when she was little and has lived with her father since then but…… 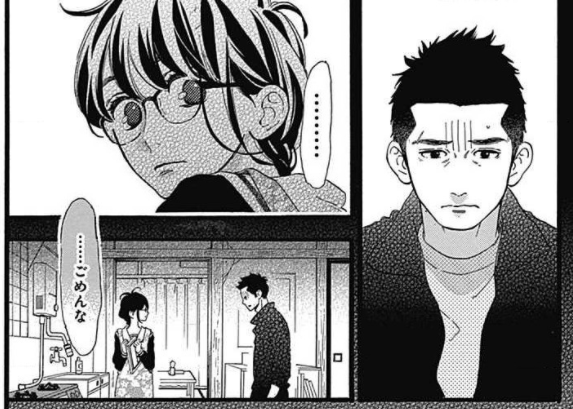 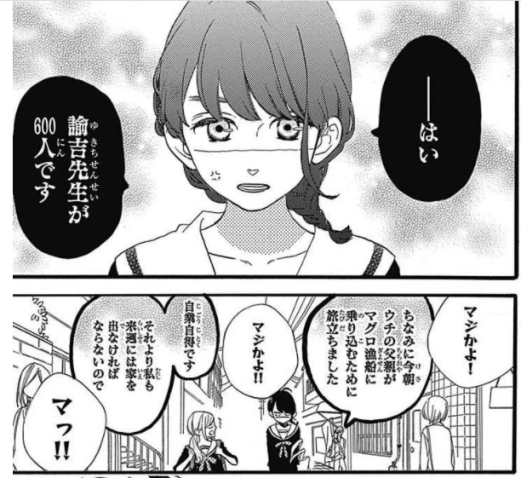 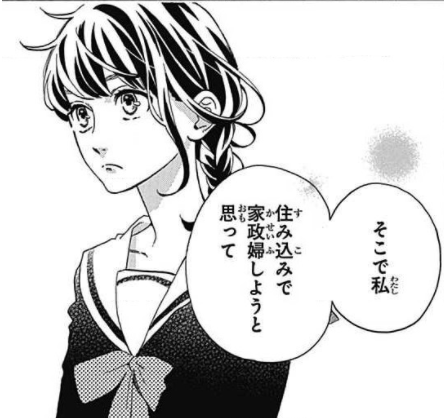 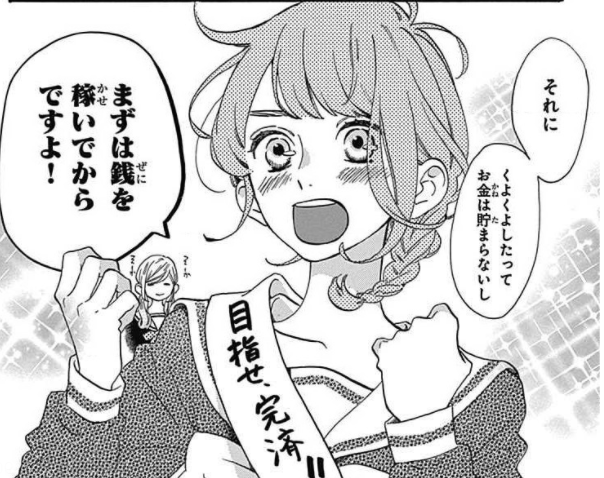 She has decided to become a live-in housekeeper!
She’s so determined about repaying all the debt back because everything such as a rent or the living expense will be all free, and she can even walk to school because the school is close from that house. 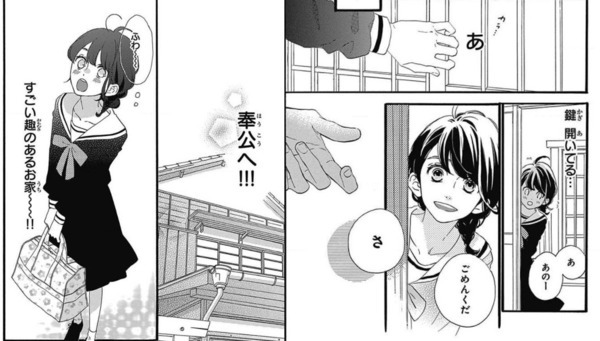 The owner of that house turns out to be a male novel writer.
Her friends are worried about living with an adult man but Fumi insists to them and herself that she should be okay. And she now visits that house, which is a little old but has a traditional atmosphere…… 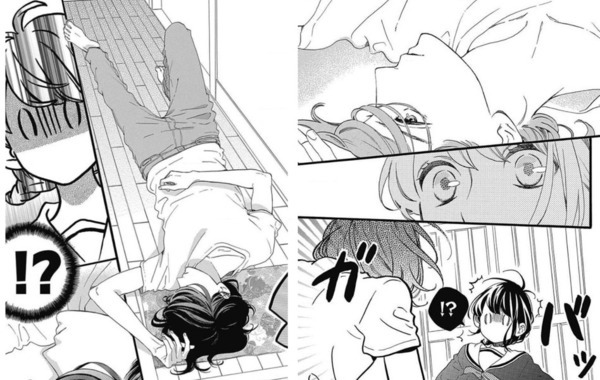 Guess what? A guy is lying down at the front door……!
He clearly looks dead but she thinks he might be still alive. When she is about to make sure about it…… Her eyes meet his, which were close at first.

Fumi finds out that he was just sleeping there. Fumi introduces herself to him and says that she will work there as a housekeeper. Then the guy says “Are you kidding me? You’re just a little girl……” 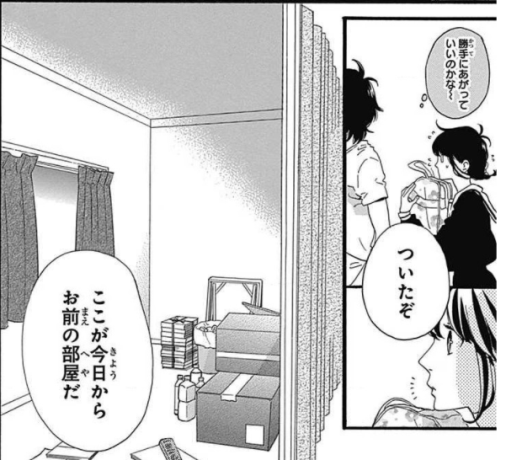 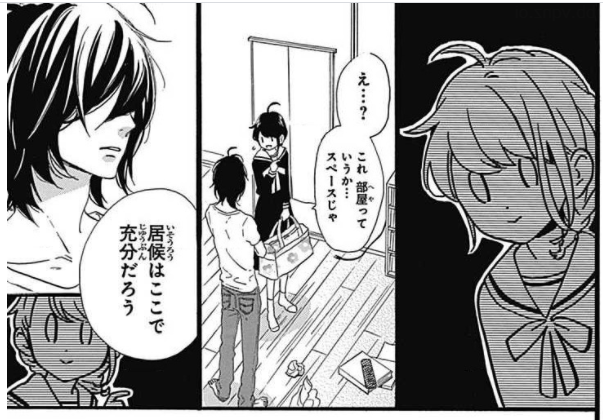 He thought that it would be a professional old housekeeper, when he heard the name, Fumi. (Fumi is a little rare and old-fashion name in Japan.) The guy points at a little space (not the room) and says “That’s your room from today.”
Then he goes, “I shouldn’t have hired one if I knew it would be such a little girl.” Then he also tells her not to make a lot of noise if she cleans the house. 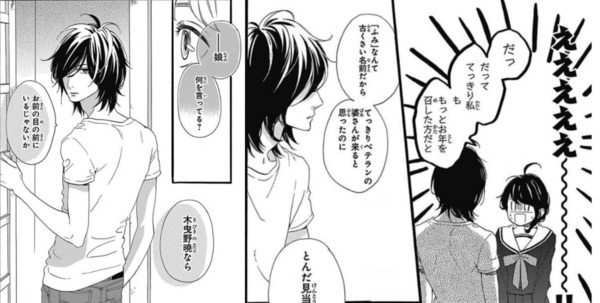 This young male writer, Fumi’s employer, is Kibino Akatsuki. Fumi is so surprised that he is too young but she decides to work hard as a housekeeper so she can prove him wrong, saying that such a little girl is useless. 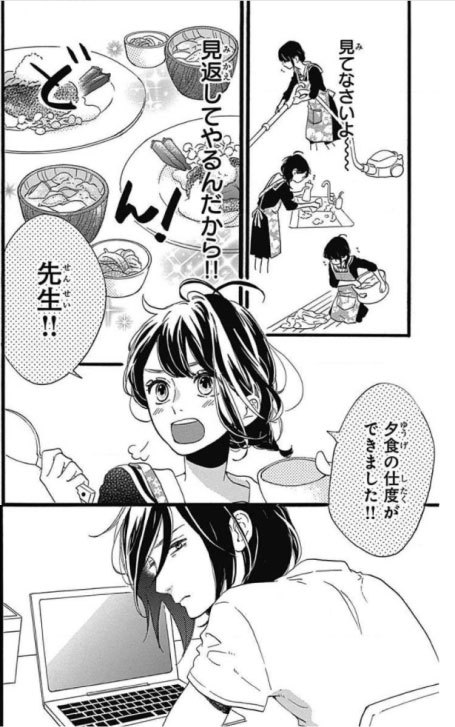 Akatsuki would not eat dinner Fumi makes.
Fumi is disappointed at it, not knowing what’s wrong with it……! 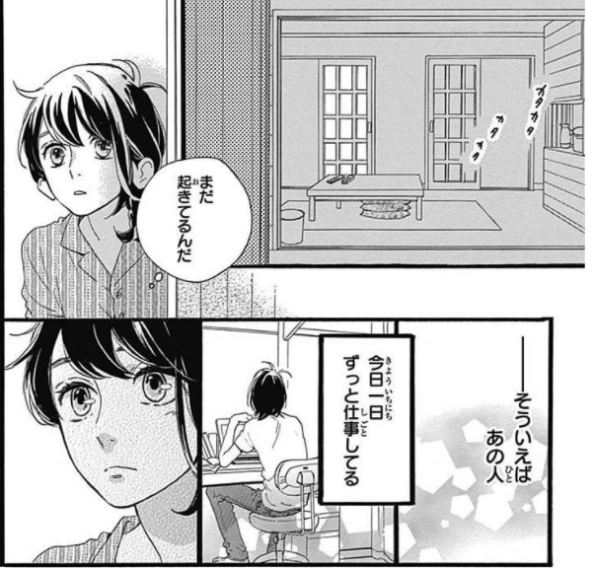 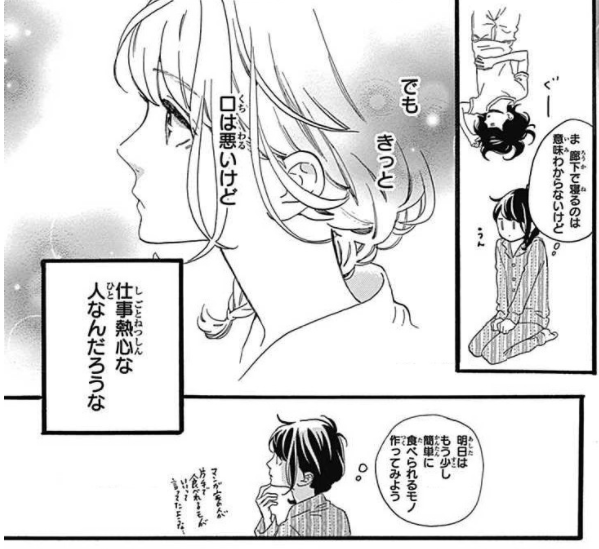 Akatsuki keeps working throughout the night.
Fumi understands that even though he has a sharp tongue, that’s what the writer should be and that is also prove that he is enthusiastic about his career. 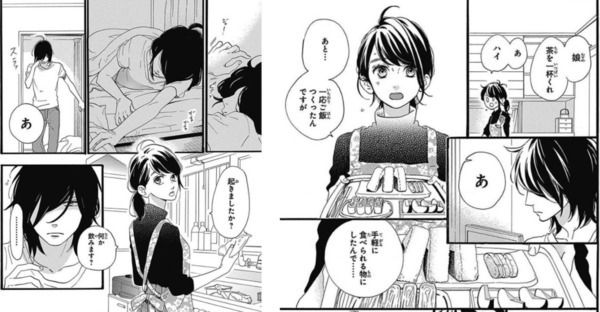 Next day, when Akatsuki wakes up, he sees Fumi, doing everything perfectly.
Fumi, being worried, now makes the light meal so he can eat it even while working on writing. 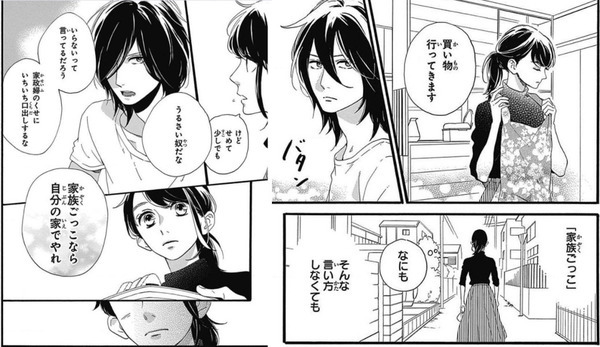 While she cares and worries about him, Akatsuki pushes her away, saying “Shut up.”
If you wanna play house, then do it in your house, he says to her. …… Then Fumi stops talking and leaves the house for shopping.
(Play house…… that’s so rude……) Fumi thinks.

Akatsuki, left alone, realizes that it becomes all quiet in the house and every place in the house is perfectly cleaned up. Then he gets a call from the editor and is told that the draft that he just submitted was all okay.

And the editor asks Akatsuki if Fumi is doing okay. Akastuki says “I don’t know. She just left. I guess she’s gone back to her home.”
Then the editor goes, “No, I don’t think so.”
“Because she has nowhere to go.”
Then Akatsuki finally knows about Fumi’s situation.
The fact that Fumi’s father has gone way to work after he’s sold their house to pay the debt back…… the fact that she’s all alone now…… 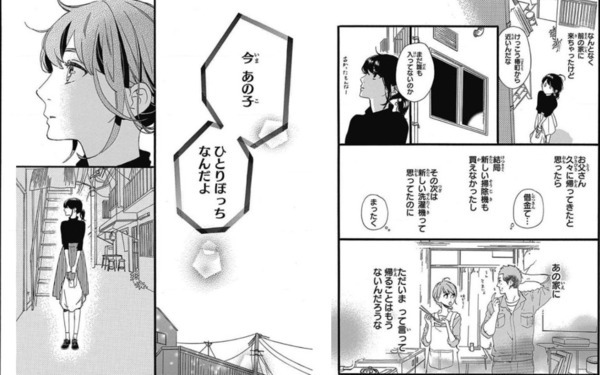 Meanwhile, Fumi somehow ends up coming to her old house after shopping.
She looks back on the past life with her father…… It was actually quite an old house, huh? It seems like nobody’s living in yet……
(There’s no way I can say “I’m home!” again in this house, huh……)

There’s nobody who waits for me even if I want to “play house.”
Fumi is realizing the fact……

…… when Akatsuki comes to bring her back.
“It’s past 10:00 pm, what the heck are you doing here?” Akatsuki asks her. Fumi says, “I was taking a walk after shopping because I don’t want to bother you ‘again’.” 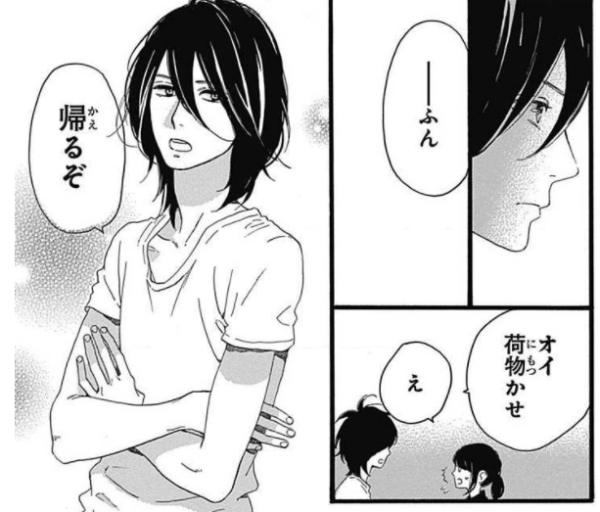 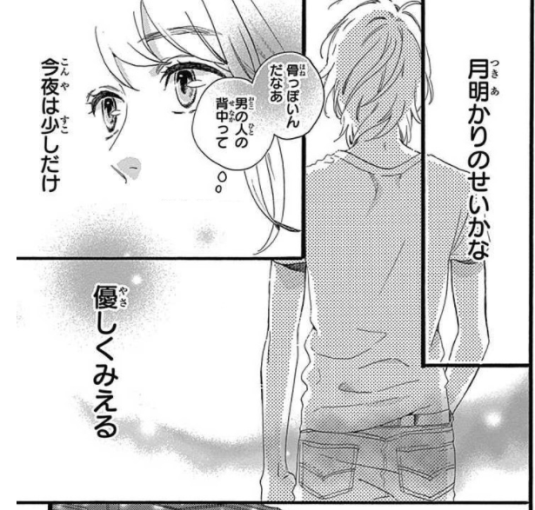 Then Akatsuki goes,
“Let’s ‘go home’.”
Akatsuki holds the stuff that Fumi has got and leads her to the house. His back looks a little warm, even though it might look so because of the moon light…… 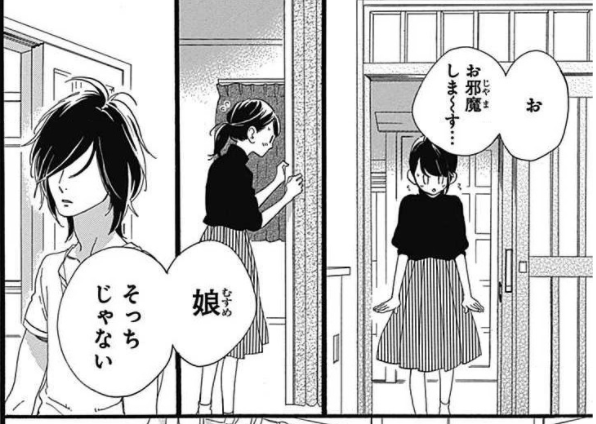 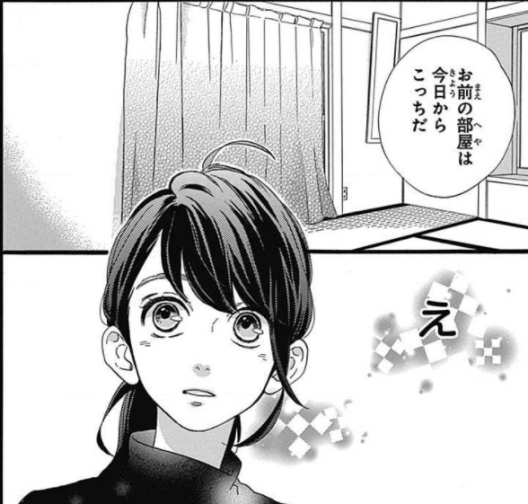 “Thank you for having me.” Fumi comes in. Then Akatsuki stops her.
He tells her to use the room (his old bedroom), not the little space he offered the day before. 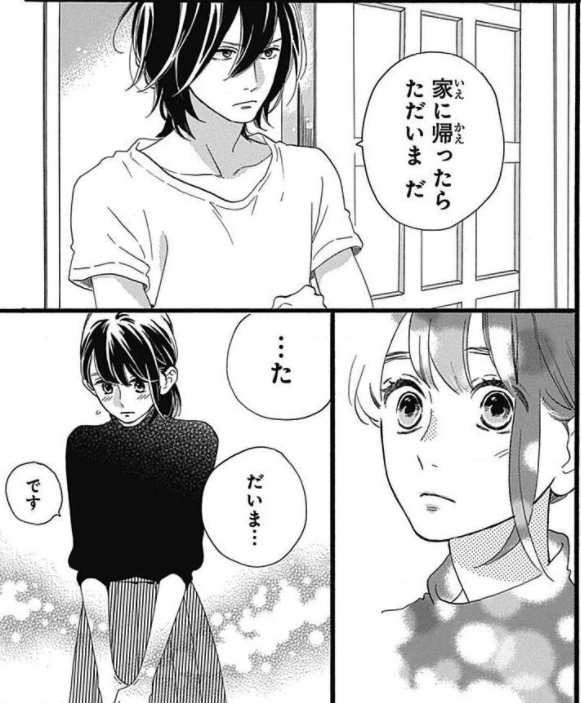 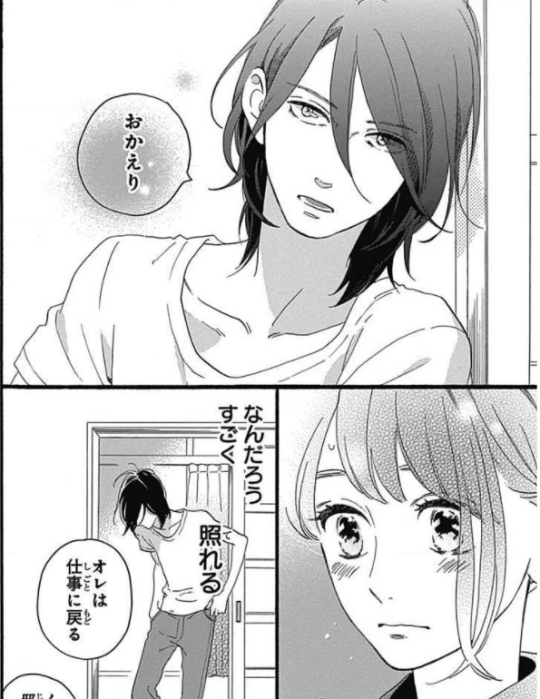 And one more thing. Akatsuki goes on.
“When you come back, say ‘I’m home,’ all right?”
A little confused, Fumi says “I’m home.”
Then Akatsuki goes, “Welcome home.”

What a lovely shōjo manga…… It’s classic but they have such a lovely relationship, huh?

According to the reviews, people say that the story goes on so slowly first but as their relationship is changes, it becomes a perfect pace, which makes us read very comfortably and want to read more!

All right! This is all for today! We’ll see you all at the next article!
Bye-bye~!
Tsubaki-chou Lonely Planet