Hello everybody! It’s Saori from Manga Republic! Here’s a question for you! Which would you prefer, love comedy, or suspense……!?

Ahh…… look at the illustration for the suspense……
Hello, everybody. I’m Manga Republic’s Boss.
Well~~~~~~ it’s a hard question for me…… I like love comedy because I can casually watch them, but again, I like suspense too, which makes me thrilled and excited. It depends on how I feel when I watch, I guess? When I’m busy working, I would want love comedy for a change. When I have a lot of time, then I wanna get thrilled and excited by suspense!

Got it! What you mean is that both have attractions and you would choose one depending on how you feel when you actually watch one, huh……? Here’s another question then. How would you like a story, where you can casually read, like a love comedy, and you can enjoy a thrilling development, like a suspense, all at the same time?

【LoveCome×Suspense】The World Will Be Destroyed IF You Don’t Choose “HER”! An Ultimate Optional Love Comedy, The World or HER!! 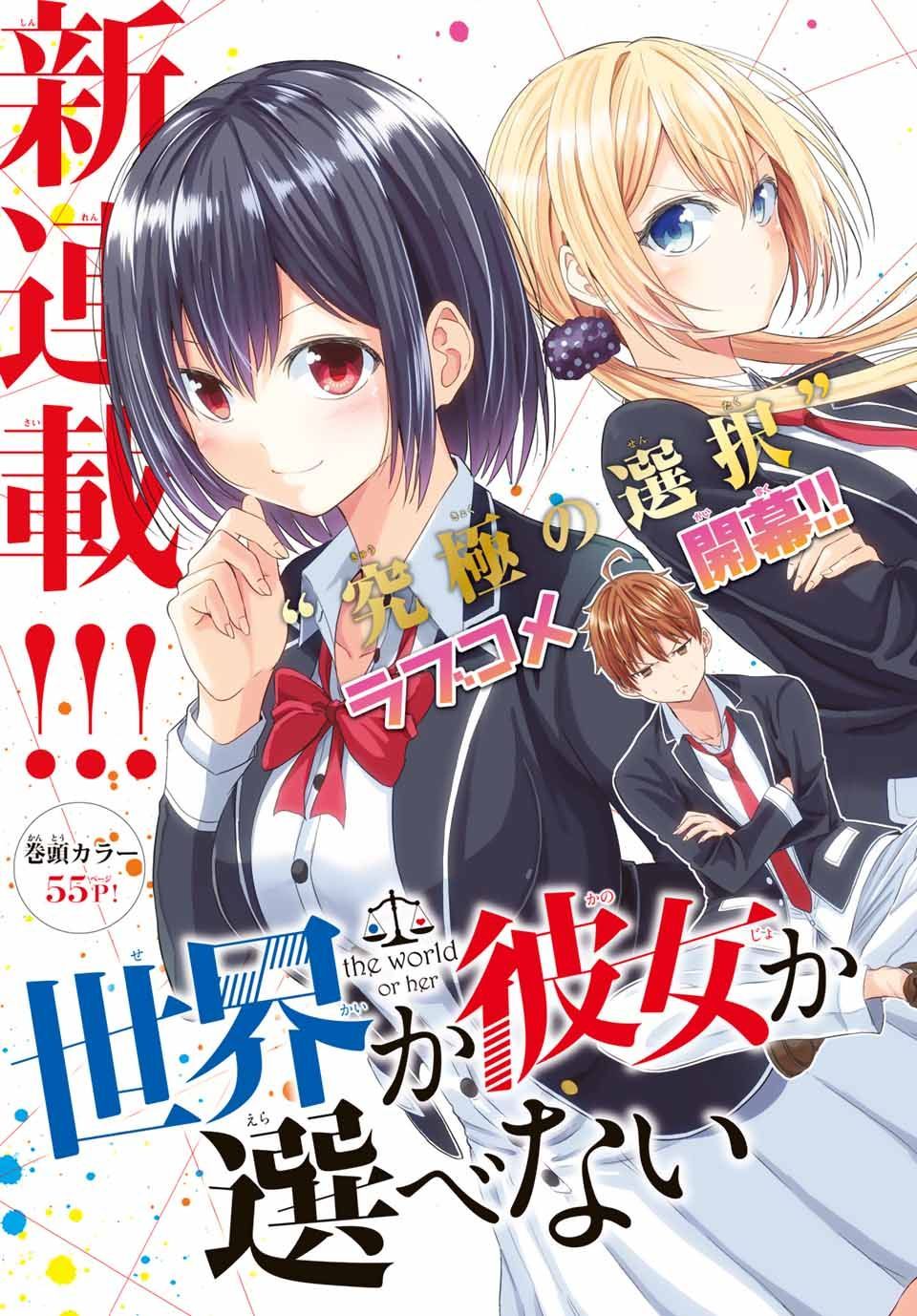 What Is The World or Her?

It’s a Japanese manga series by the manga artist, Uchiyama Atsushi, serialized in Bessatsu Shonen Magazine, from 2017 to 2020. It’s concluded with 40 episodes and eight volumes have been released.

Yep! Since it only has eight volumes, those who don’t have time can even enjoy reading all the episodes! Plus, it’s recently been concluded so I bet many people still don’t know how the final episode went, even though you might be familiar with this series……!?

Outline of The World or Her!

The main heroine protagonist, Fujisaki Ayumi, is the prettiest girl at school and has been asked for a date by so many boys.
Ayumi has a childood friend, named Nakagawa Kouki. Kouki always saves her, who’s been persistently flirted with by so many boys, by driving them away. 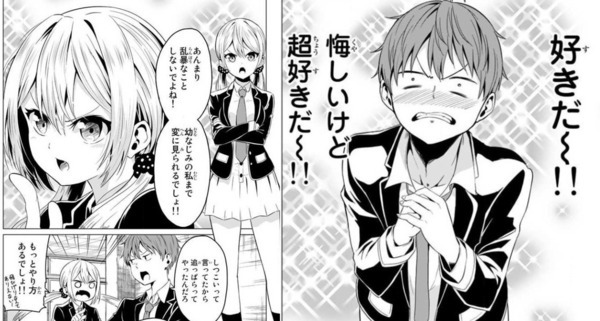 One day, when Ayumi and Kouki become alone, Ayumi scolded him; “I’m glad that you always drive the boys away for me but don’t be so violent!.”
Ayumi usually tries to behave herself politely and in a sophisticated manner, like a princess, however, she is actually a little tomboy, being strong and cheerful,speaking her mind clearly. However, Kouki, her childhood friend, is the only one who knows that side of her. And…… Kouki has had a crush on her too since little. 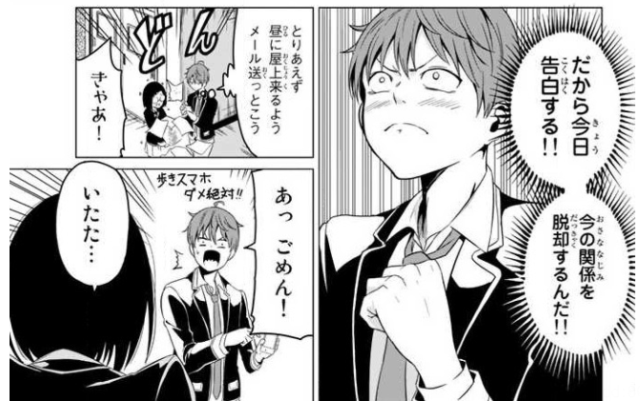 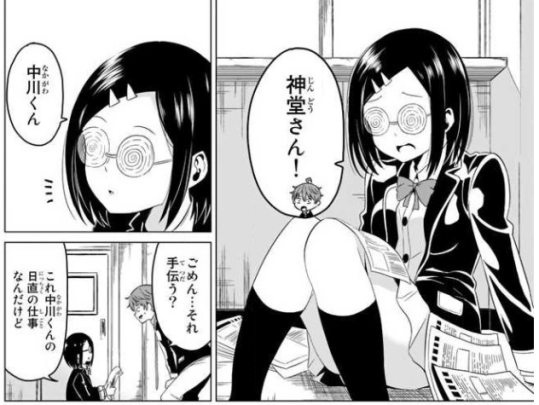 I’m gonna ask her for a date today!
When he makes that decision, he bumps into his classmate, Jindou Hikari, in the hallway. She tends to stay quiet, and he really doesn’t talk with her, so he doesn’t know what she is thinking. When they are working on the day duty together, they start to talk about “Ayumi.” 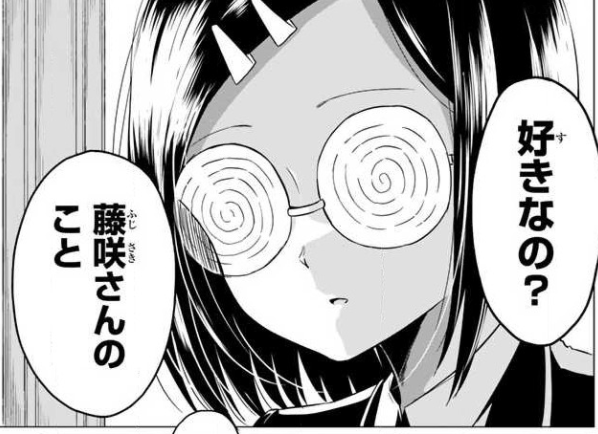 “Do you have a crush on Fujisaki-San?”
Kouki says “NO” righg away. Of course it’s actually “Yes,” but he just says it because she reads his mind. When Kouki is about to leave there in a hurry, Hikari says to him;
“…… According to this ‘index number,’ you seem to have made a decision, huh? You can no longer hundle this situation, huh?”
“Well then, let me make a move.” 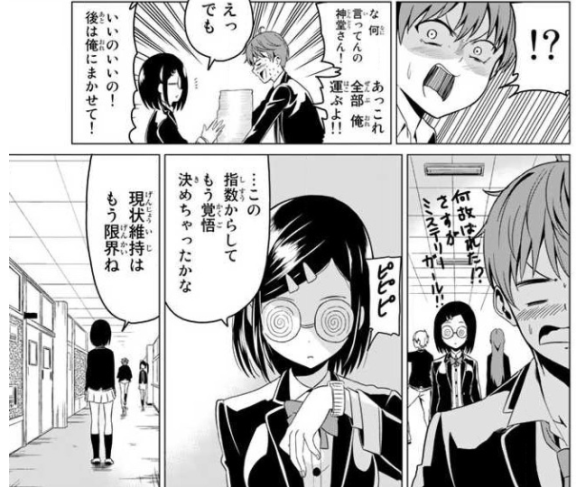 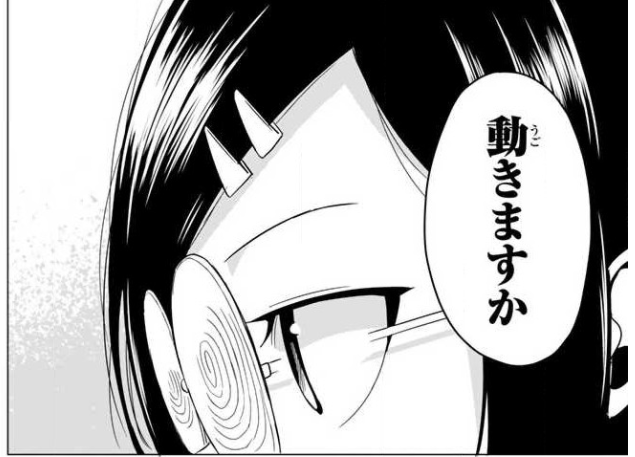 Afterwards, Kouki is able to call for Ayumi to the rooftop at school.
Ayumi, who seems to want to leave there because she’s planning to have lunch with her friend, would never expect that she will be asked for a date by Kouki. 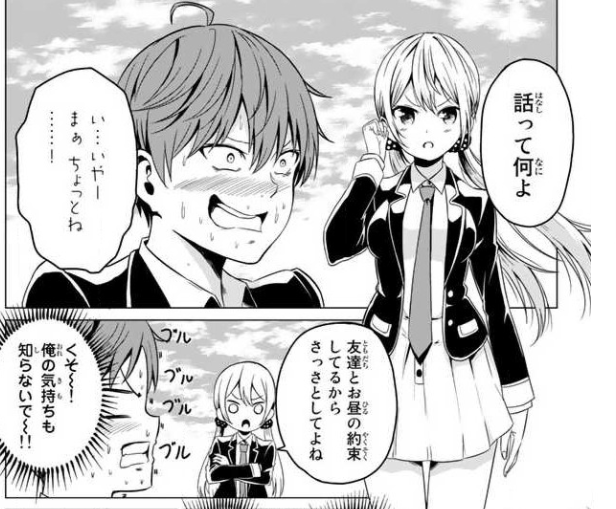 But he’s now prepared for declaring his love to Ayumi!
He was going to say, “I have a crush on you……!”, when…… 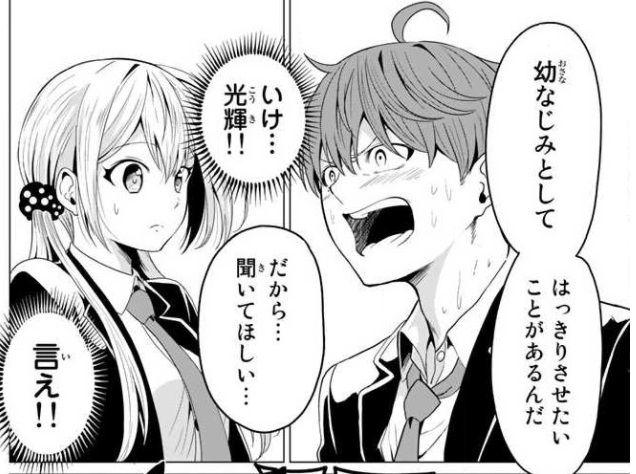 Hikari surprisingly shows up right there.
Hikari greets Ayumi and walks to Kouki, taking her glasses and hairpin off. 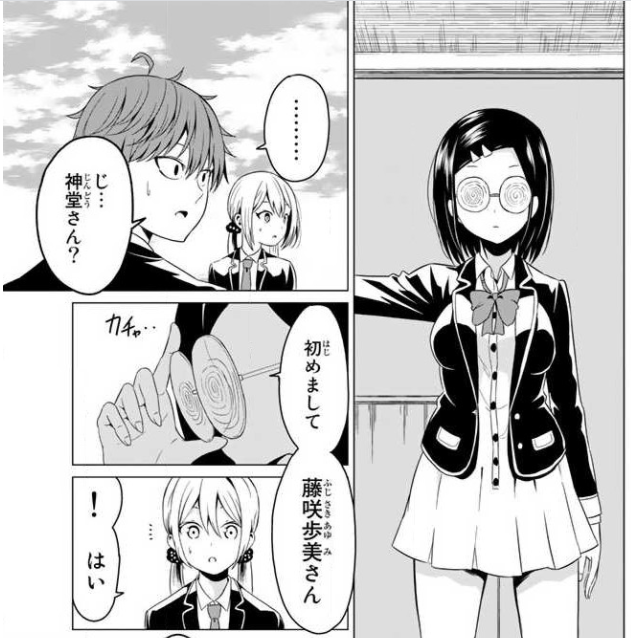 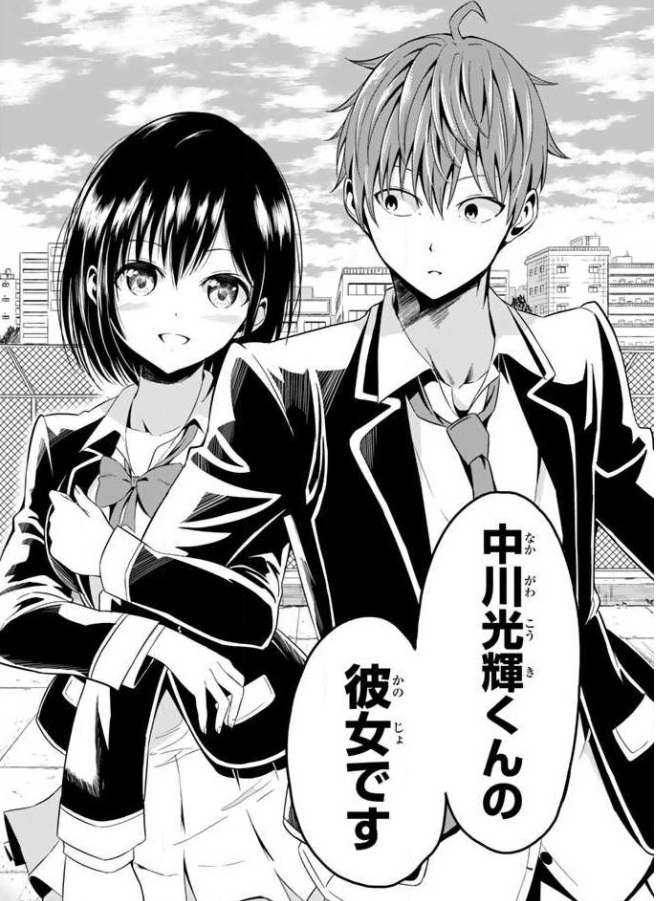 Both Ayumi and Kouki are perplexed, shouting.
Hikari says to Kouki that the reason why he calls for Ayumi-San to the rooftop is bcause he wants to introduce her to Ayumi-San. There’s no way he has such a reason, however, Ayumi seems happy for both of them.
“That’s great, ‘Nakagawa-Kun!!’ You’ve got a lovely girlfriend, huh???”

After Ayumi leaves there, Hikari confesses something to Kouki.
Hikari has had a crush on Kouki for a long time and wanted him to give up on Ayumi and date with her. 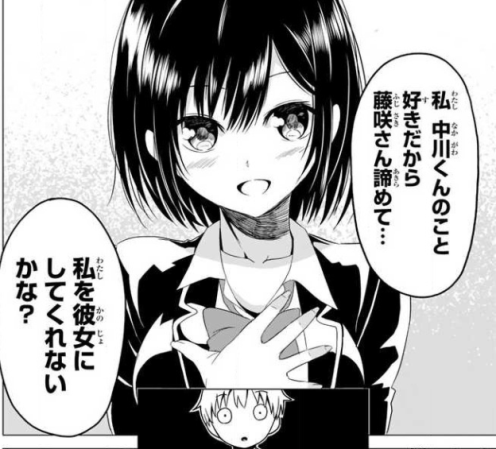 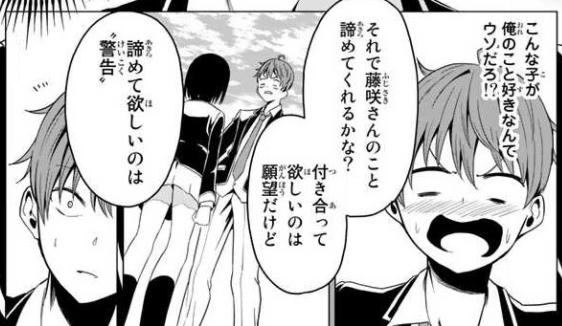 Kouki gets panicked at her pretty appearance, and Hikari goes on.
“It’s my desire that you date with me but what I want you to give up is a ‘warning.’” 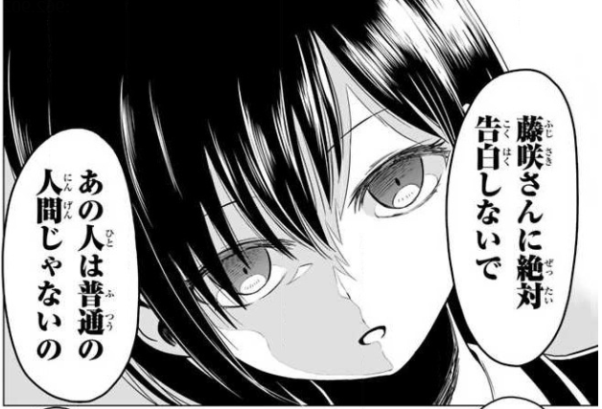 “Do not ask Fujisaki-San for a date. She is not a normal human.”
According to Hikari, when she’s upset, something “terrible” happens.
She says she has a special ability and when she really gets upset, “something terrible happens.”

Everything started eight years ago. Only Ayumi survived while all the family members died from the accident.
That’s the beginning of everything. What she caused when she lost all her family eight years ago was…… 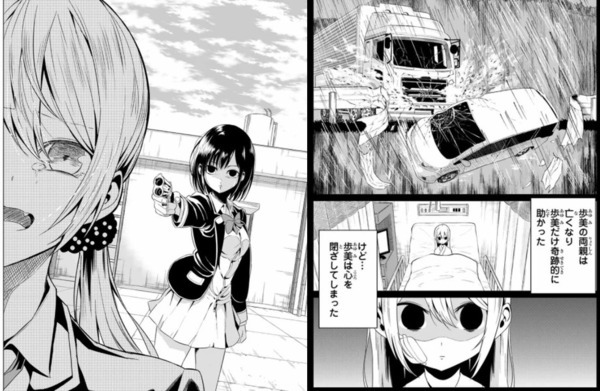 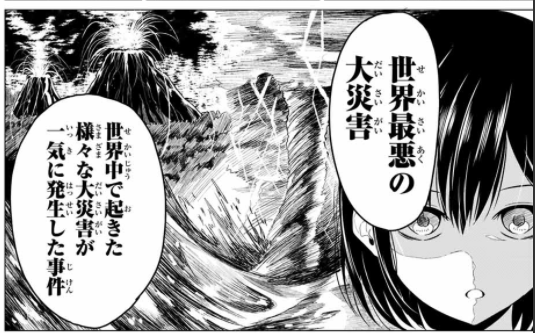 ……an unprecedented disaster, resulted in massive death throughout the world.
That happened because she really got upset, lamenting so deeply from a big loss of her family. And now, just like eight years ago, something that’s gonna upset Ayumi’s mind so bad, is about to happen.
That’s her childhood friend, Kouki’s love confession to her.
Hikari says the disaster which will caused by her, might be much bigger than the one occurred eight years ago. 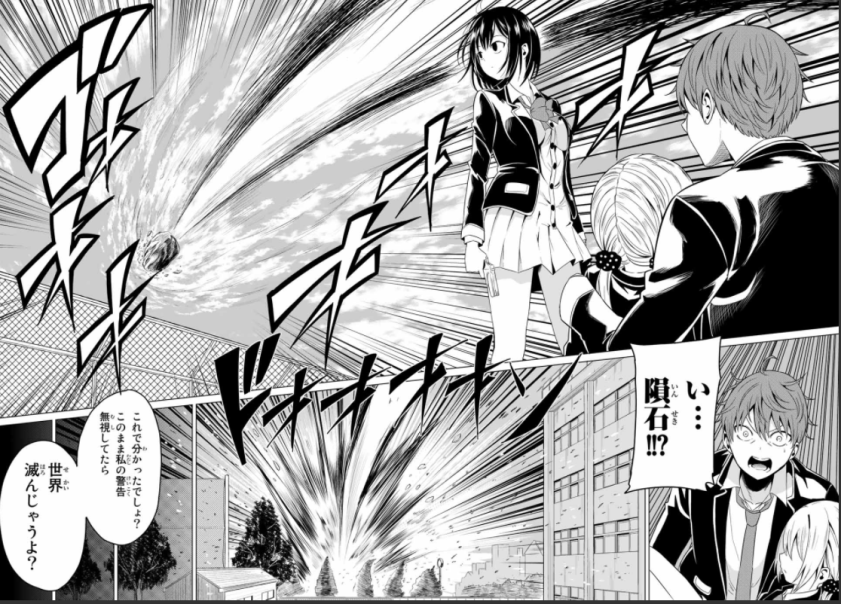 If he declares his love to Ayumi, the world is going to have a big disaster again.
If he gives up on Ayumi, then the world can stay in peace.
Hikari asks Kouki;
“Well, which would you choose?” 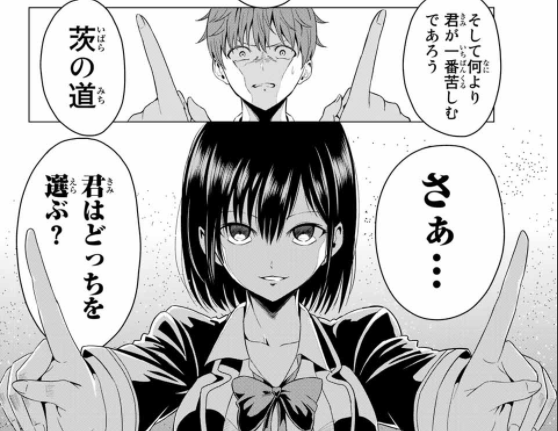 Is Kouki able to handle his loving feeling towards Ayumi……? Or the world is going to be a disaster, by declaring his love to her……!?
This series already came to an end so you can read the whole story too! It’s a now-hot lovecome ×suspense manga! Give it a try!